You are here: Home / Travel diary / A walk with kids in the garden of good and evil – Savannah Part 1. 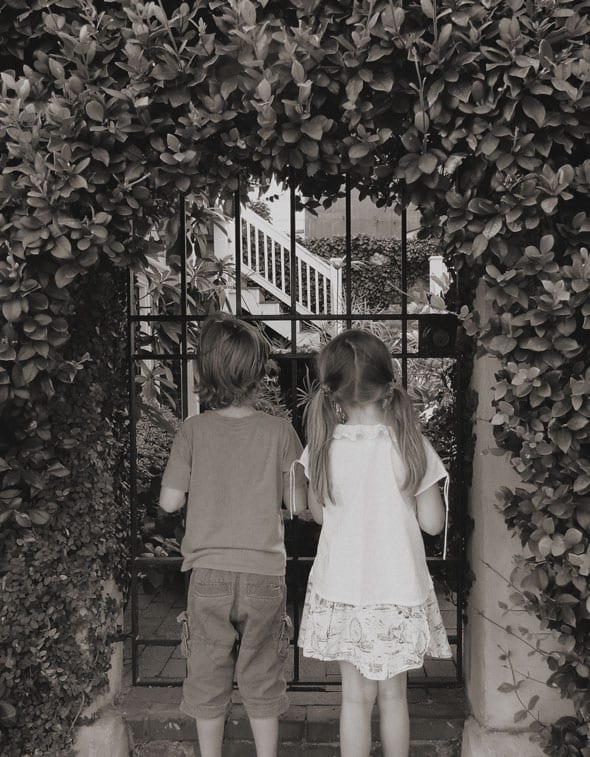 Lollipops, dolphins and ghosts were all I needed for a walk with kids in Savannah.

At nighttime open-topped hearses cruise the streets on ghost tours. This is the Southern city known as ‘The Most Haunted in America.’ This is the city in the state of Georgia that was the backdrop for Midnight in the Garden of Good and Evil by John Berendt. (If you’re visiting Savannah you must read this book – that is, adults not kids!!)

Wandering through Savannah’s Historical District, I searched with my kids for homes painted in the distinctive shades of Haint Blue. The trees with hanging Spanish moss shielded us from the midday sun. 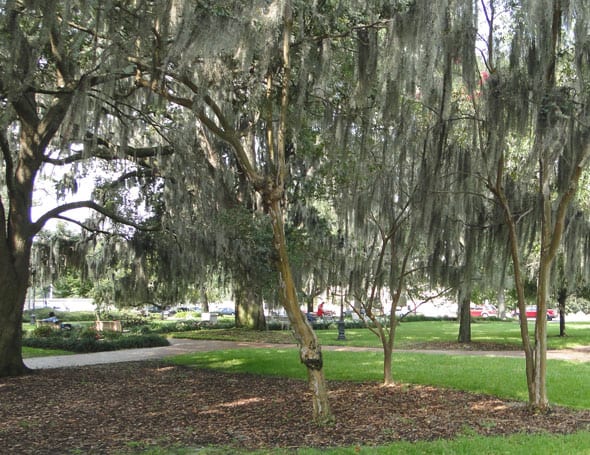 We found doorways, walls, shutters, window frames and walls painted in its distinctive hues of blue and green – reminiscent of the sea. Haint is an old word for haunt or spirits. I explained to the kids that many believed the blue would keep ghosts away. It stemmed from old myths that spirits could not cross waters. Haint blue on the homes would trick spirits into thinking that the house was under or surrounded by water. 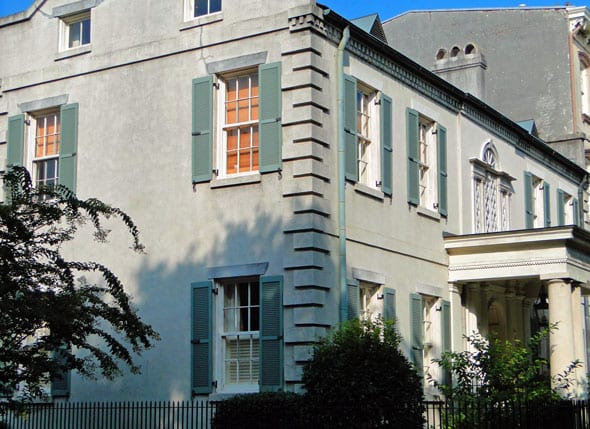 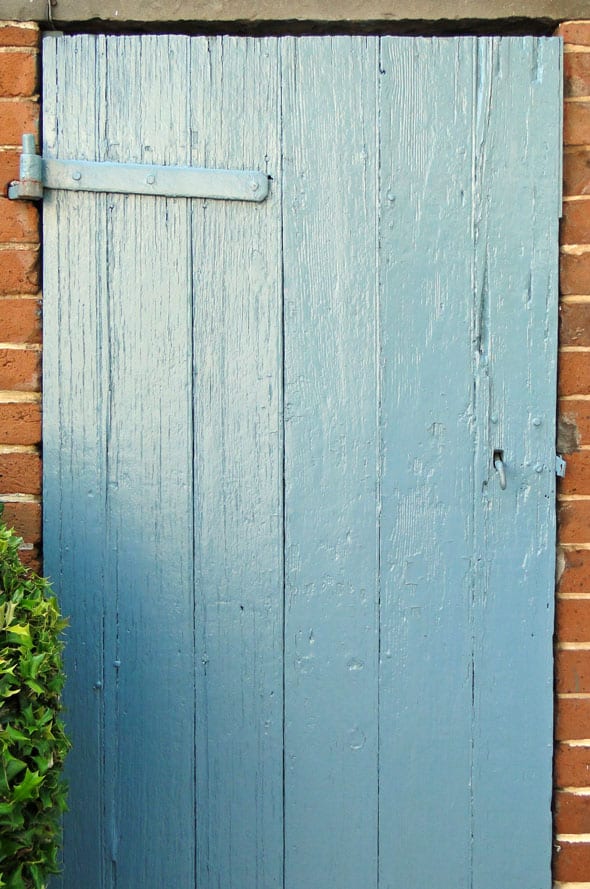 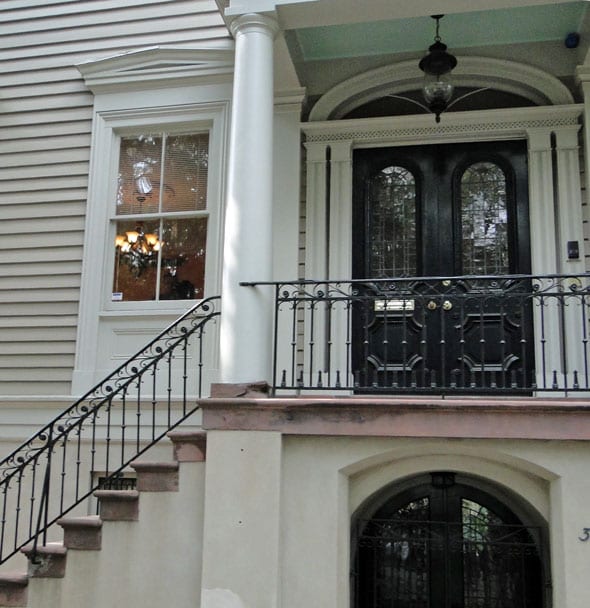 It’s believed that this folklore originated from the enslaved Africans brought to the southern coast of the US. They painted their walls Haint Blue to ward off evil spirits. Another theory is that , unknown at the time, the paint itself did have an effect of keeping death away: the Haint Blue was made of a mixture of Indigo, lime and milk that might have repelled the mosquitoes causing the epidemics. Descendants of these slaves known as Gullah or Geechee still live in the coastal regions of South Carolina, Georgia and Northern Florida and have maintained many of their African cultural roots and customs.

And what about the dolphins on the walk with kids in Savannah? My kids found them here and there on the drainpipes of the old houses. They’re known as dolphin downspouts or fish drainpipes. The common dolphinfish is also known as Mahi Mahi or Dorado. Perhaps another symbol of the house under water? My kids were becoming experts on tracking them down. 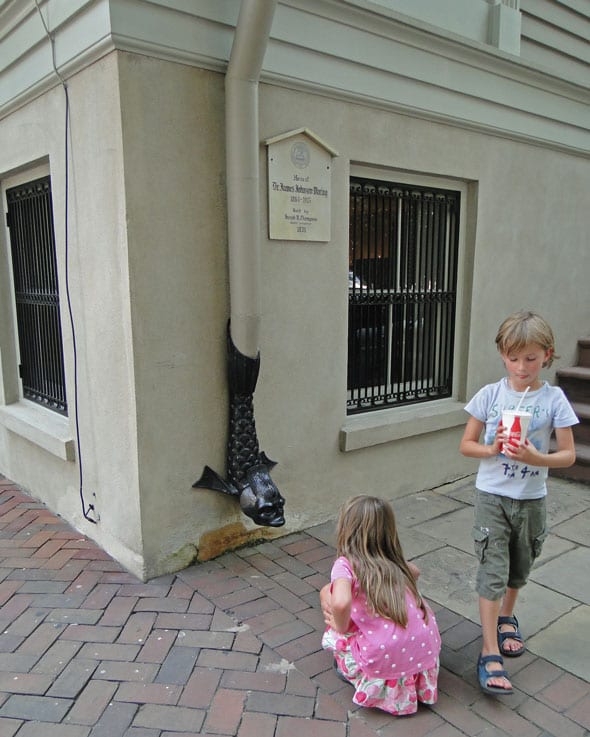 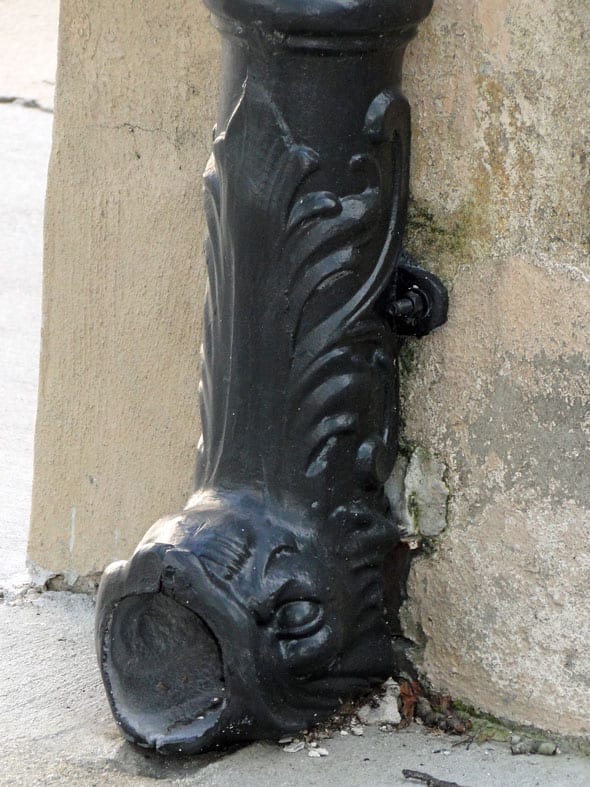 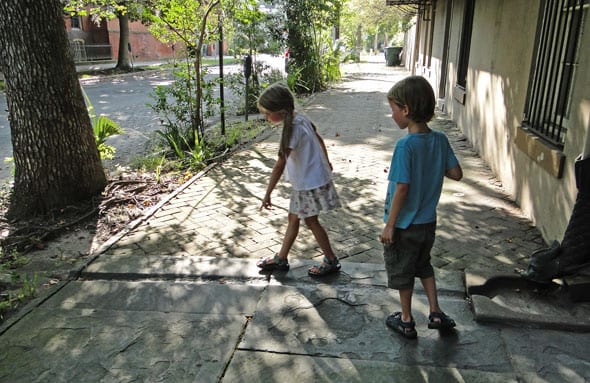 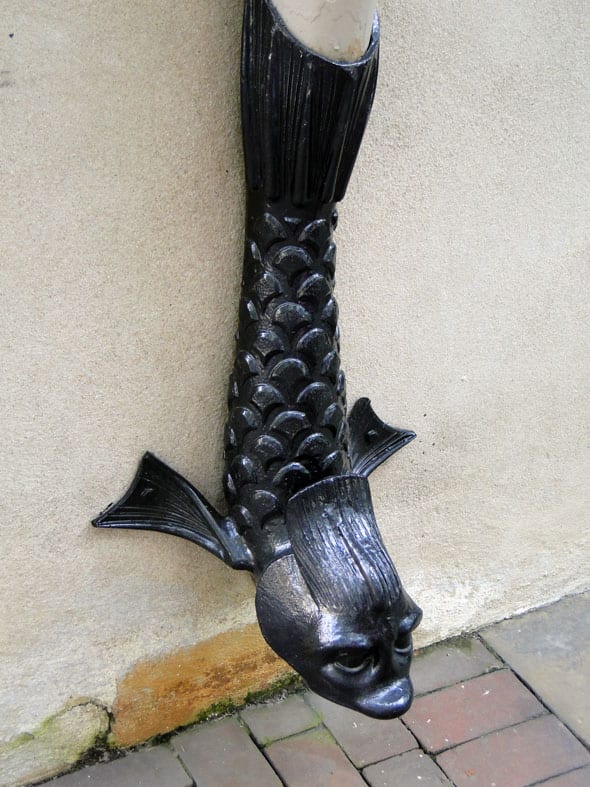 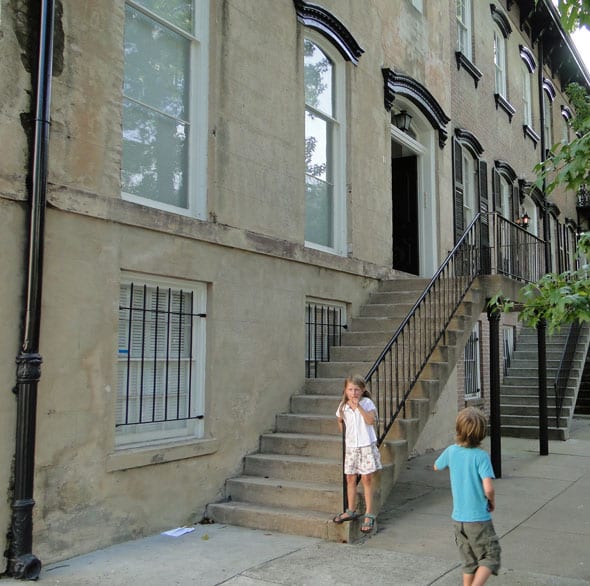 The garden squares and streets in the Historical District of Savannah are mesmerizing. Square after square and street after street are lined with beautiful old homes. If it wasn’t for the cars and parking meters you would expect to find horses and carriages in the streets. 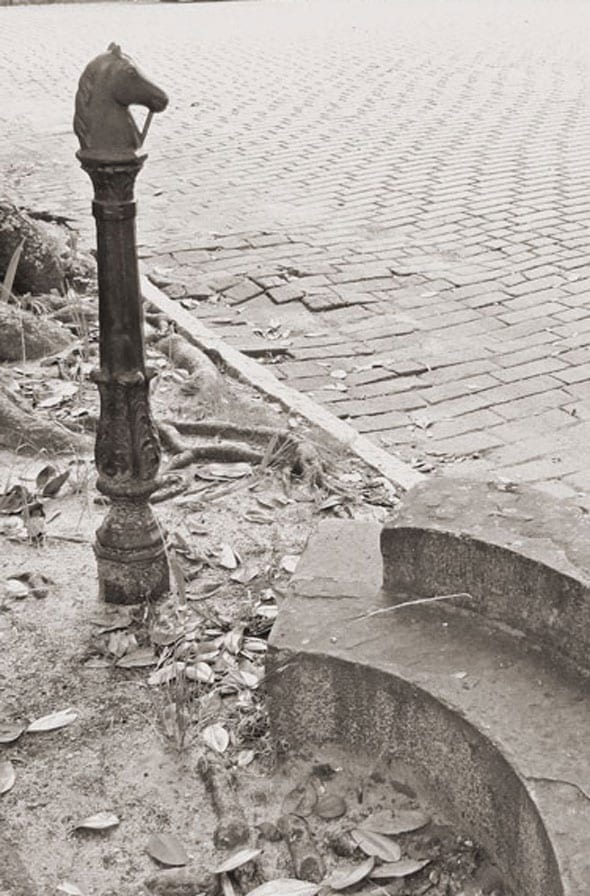 The founder of the British colony of Georgia and Savannah, Gen. James E. Oglethorpe laid out the town in a grid plan in 1733. By 1851 there were 24 garden squares. Almost all of these gardens remain today surrounded by 18th and 19th century homes and architecture. Oglethorpe’s ban on slavery was lifted in 1750 after the British general left the colony. Slaves then toiled and died here.

And then just around the corner from my mother’s home, we came to a halt. We had passed it on numerous times but never noticed it until our walk searching for ghosts and dolphins. The house was trimmed in Haint Blue and next to it was a gate to a side garden. Behind the iron wrought gates there was a fish fountain. On the walls there were flower baskets filled with sea shells. And in case the ghosts didn’t get the message there was another fish sculpture in the side path. I took one last photo. When I looked at this photo later…there was a streak of light emanating from the side gate… 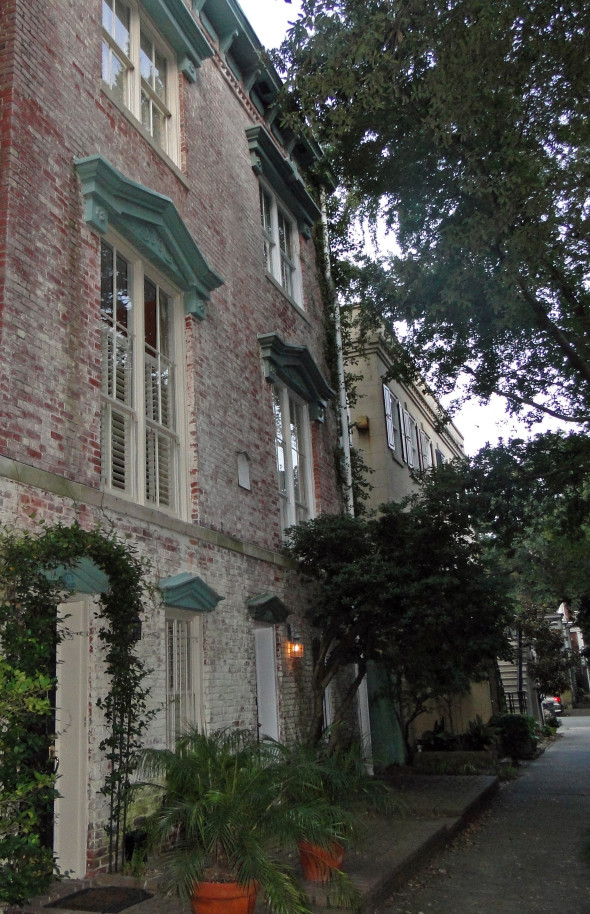 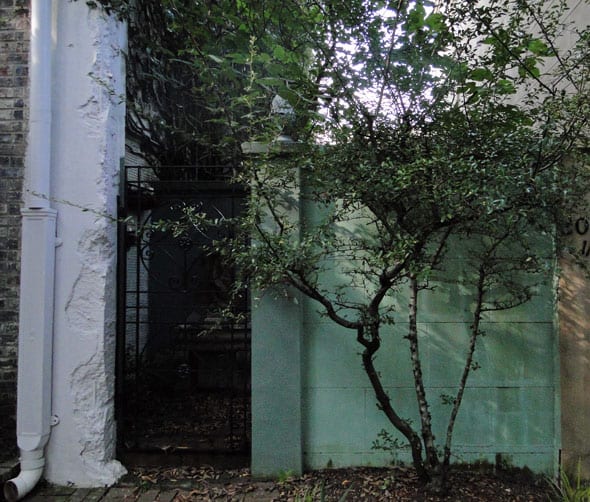 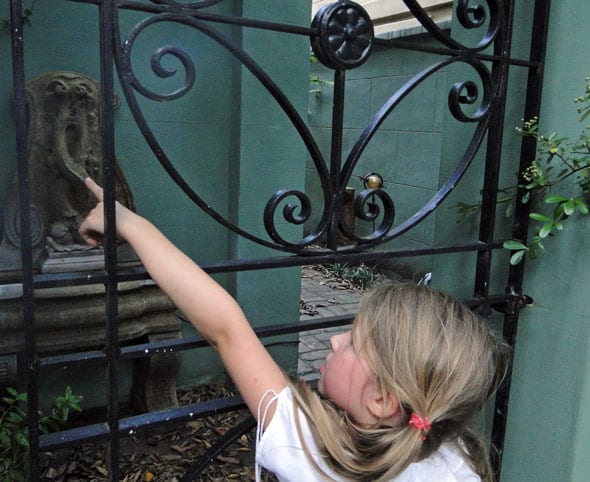 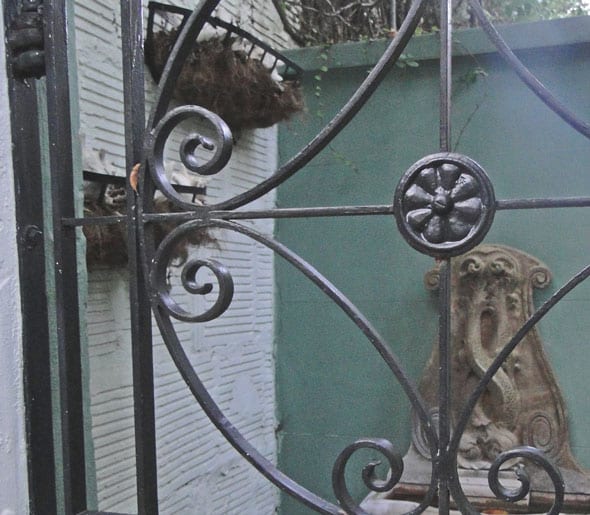 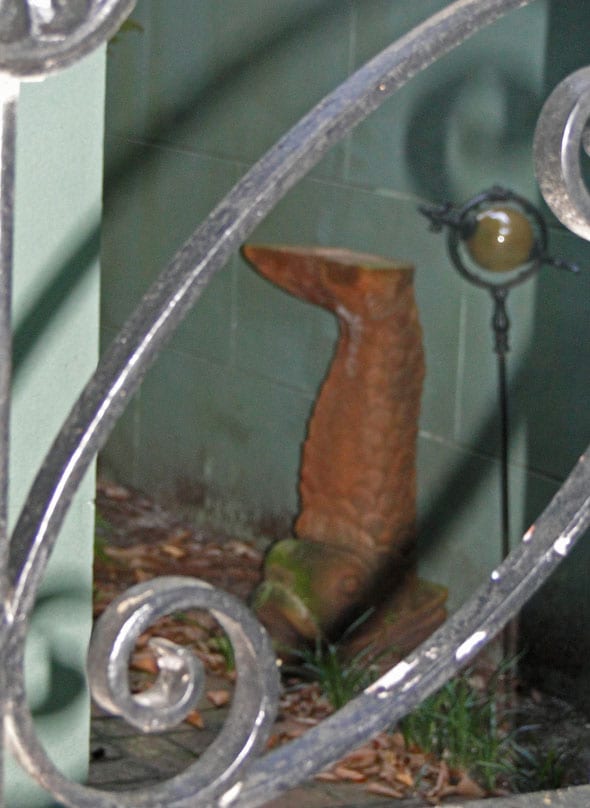 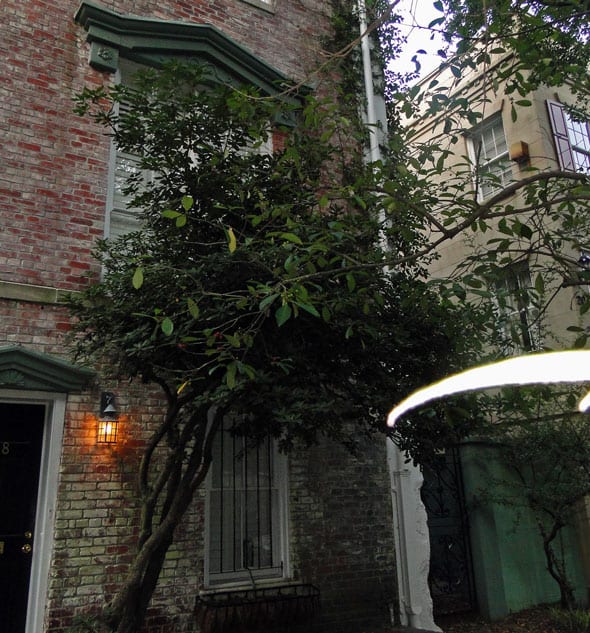 And lollipops? Well how else could I persuade my children that it would be fun wandering and staring at historical homes with me? I had to use bribery to embark them on the tour. But it turned into an amazing treasure hunt walk with kids in Savannah as we searched for Haint Blue and dolphins to keep the ghosts away from the garden of good and evil.