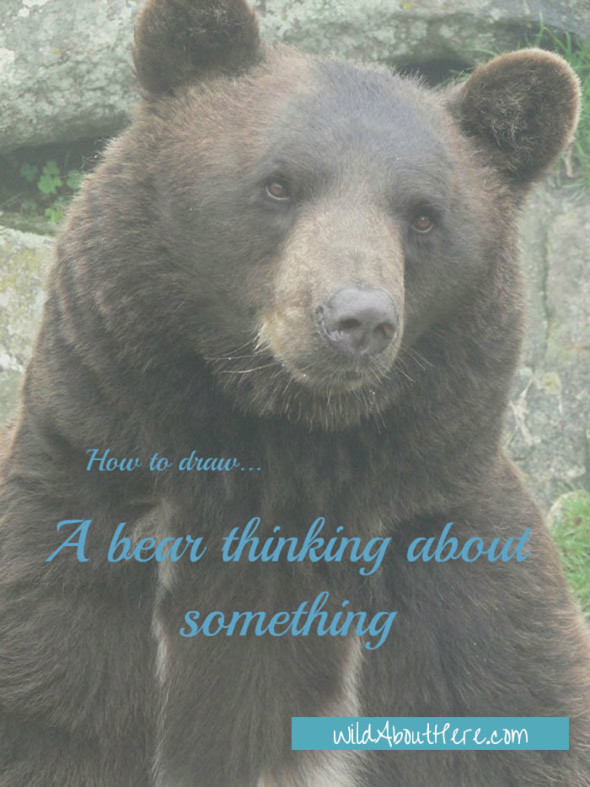 Pictures tell a thousand stories, which is very true when it comes to children’s book illustrations. I want my kids to appreciate art work by book illustrators. So I’ve recently been doing art projects with them in the hope that they’ll take a closer look at illustrations in picture books.

Earlier this year, I discovered a wonderful art lesson for them in the British newspaper the Guardian: How to draw…a bear thinking about something by Jon Klassen. 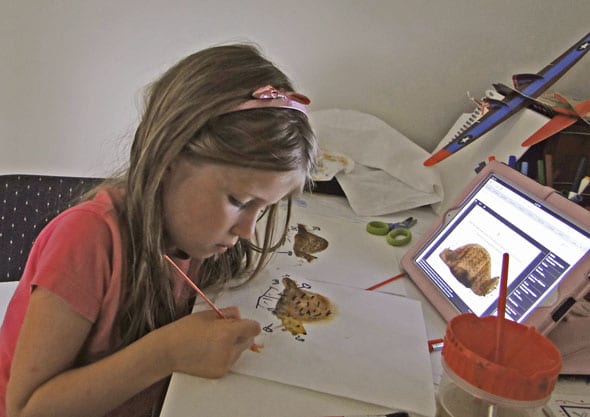 The step-by-step lesson shows you how to paint the bear in a scene from Canadian author Jon Klassen’s I Want My Hat Back. The digital and Chinese ink used in the children’s book illustrations are subtle and allow the child’s imagination guide the story. Another book by Jon Klassen –  This Is Not My Hat – won the prestigious 2013 Caldecott Medal for illustration.

I did the project together with my daughter Luce.  With the article opened on my iPad, we followed the seven steps in making our own paintings of a bear thinking .

I decided to read her the book AFTER we did the painting project. I personally felt this would help her take a fresh look at children’s book illustrations. 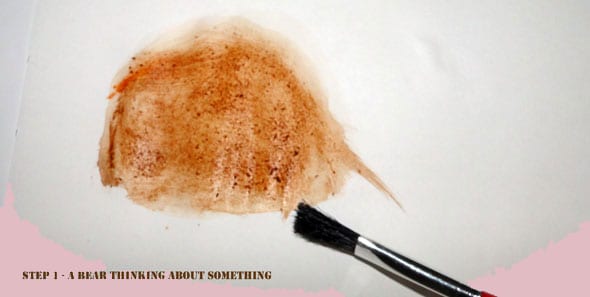 Paint or draw an oval/half circle shape in brown.

We used water colors but you could do this with marker pens or coloring pencils. Although it’s not in the instructions I pointed out that she should add some darker brown to the bottom of the lump or mound (which will be the bear’s arm). 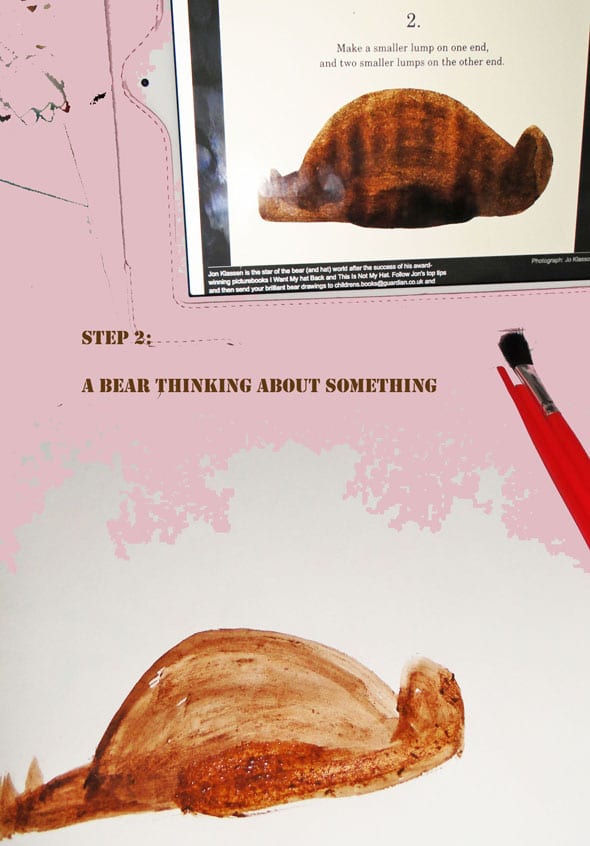 Add some strokes for the head and feet.

I pointed out to Luce that she needed to add the toes like me. 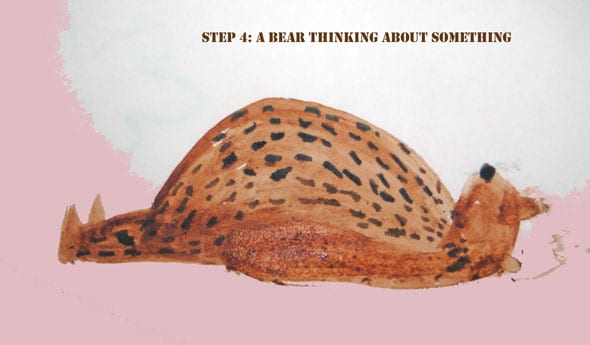 I used a black marker to make dashs across the bear (above) for the fur as well as his nose.

Luce decided to add a black eye to her bear. 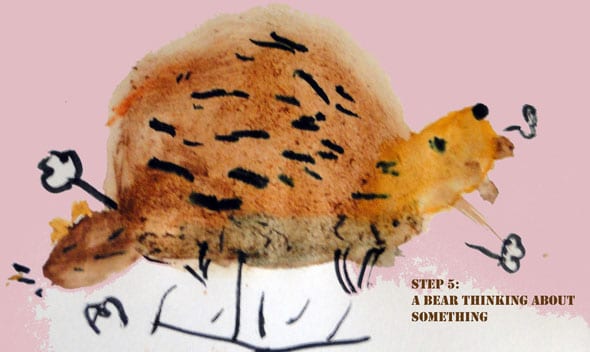 You can use a paint brush, but we chose the black marker again to add grass and flowers around the bear. Luce drew flowers around my bear as well as hers. 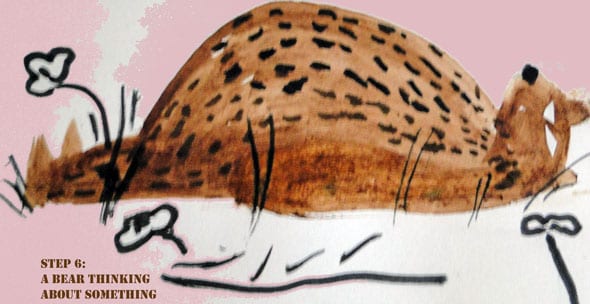 As per the Guardian’s article instructions, I cut out two tiny pieces of white paper to stick on as the eyes. Luce didn’t want them. She said her bear looked much cuter with one black eye.

Add black dots for the pupils.

I drew in the black pupils on the white eyes, but Luce preferred her version with the one black eye.

And there you have a bear lying in the grass thinking about something.

A bear thinking about…. add your own storyline and illustrations 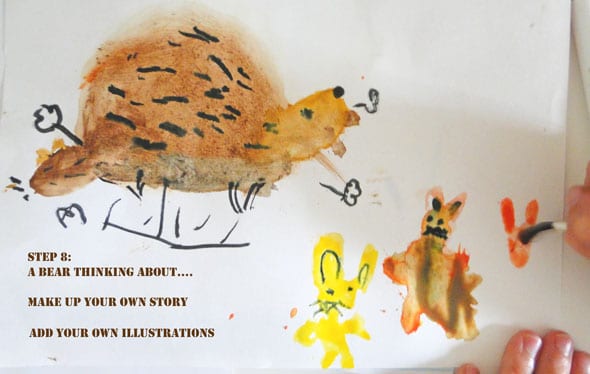 Number 8 was not part of the seven step instructions.

Since I hadn’t read the book yet to her, she had no awareness of the irony in her adding rabbits to the picture.

In Jon Klassen’s book the bear can’t find his hat.  He comes across a variety of animals asking them politely if they have seen his hat.  Then the bear realises he has seen his hat – the rabbit had been wearing it. In one of the book’s illustrations the background is red. I explained to my kids the bear was ‘seeing red’ as he was angry.  I like when children’s book illustrations use color or drawings to explain emotions without the need of words. 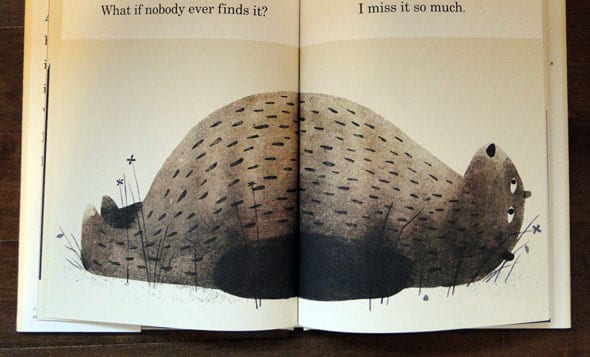 Did the bear eat the rabbit?

After finding the rabbit, bear is wearing his hat again and the bunny is gone.  He tells a squirrel, “I haven’t seen any rabbits anywhere. I would not eat a rabbit.” Luce looked at me with horror when I read this to her.  Her brother laughed out loud and announced the bear had eaten the cute bunny. I quickly assuaged her by saying that the bunny had escaped.  I couldn’t help smiling at the wicked but understated humor in the subtle illustrations.

Luce looked at her own picture of the bear thinking and surrounded by rabbits. She then looked at the bear sitting alone with his hat back on.  I could now see Luce thinking. I wish I could have been skilled like a children’s book illustrator and painted her expression.

I Want My Hat Back by Jon Klassen is available on UK Amazon and USA Amazon.

Another recent art project I did with the help of illustrations for a kid’s book was to teach my kids how to mix colors.

I had been intrigued when I first read the Guardian instructions. For me, the best thing about this art lesson to appreciate children’s book illustrations, was that my daughter decided to make up her own story and add her own illustrations – especially as she preferred the ending of her tale of a bear thinking!