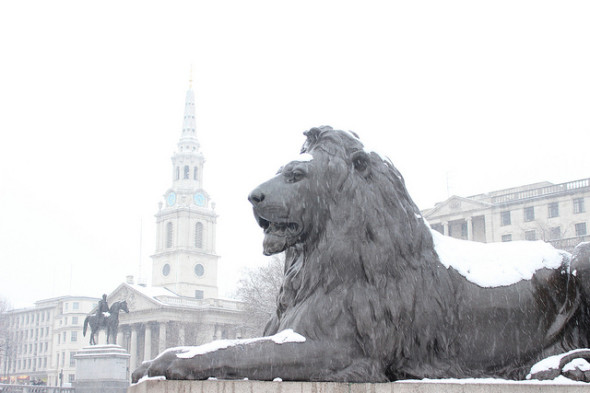 If you are visiting London with kids, there are some great children’s books on London to read to them to bring the city alive.

In part 1 I had further suggestions of  children’s books which will give you tips on what to do and see with kids in London while making them excited about their visit.

“Pussy cat, pussy cat where have you been?

I’ve been down to London to visit the Queen

KATIE IN LONDON by James Mayhew

In this book the pussy cat is the lion statue in Trafalgar Square which comes to life and takes Katie and her little brother Jack on his back for a ride across London.

They board the London Eye, gaze at the enormous dome of St Paul’s Cathedral and cross the Tower Bridge during their escapades. They also visit the Globe Theatre, a faithful reconstruction of Shakespeare’s play house.

And, of course, they check out Buckingham Palace where Queen Elizabeth II lives.

KATIE AND THE BRITISH ARTISTS by James Mayhew

After greeting the lion statue, you have a perfect excuse to take the children on a tour of the National Gallery also located in Trafalgar Square. The museum has an incredible collection of Western European paintings dated from the mid-13th century to 1900.

BUT first read KATIE AND THE BRITISH ARTISTS by English author James Mayhew.

Art comes alive in this children’s book. Katie, with the help of the shepherd boy from the painting The Cornfield by John Constable, enters the scenes of paintings by four major British artists from the 18th and 19th centuries.

Like other books in the KATIE series, kids become inspired by art.  Try and keep up with them as they try to find if the paintings in this book by Thomas Gainsborough, George Stubbs, J.MW. Turner and Constable are all currently on display at the National Gallery.

The National Gallery has suggested tours and printed trails for families, including one called “Katie’s National Gallery Adventure” aimed for children aged 5 to 8.  By the way, entry is free in all British public museums. 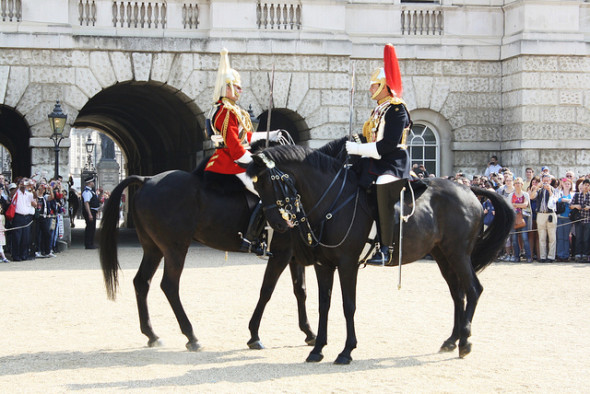 “Madeline, Madeline, where have you been?”

“We’ve been to London to see the Queen.”

MADELINE IN LONDON by Ludwig Bemelmans

Instead of a lion, Madeleine and the Spanish Ambassador’s son gallop across London on a horse.

The retired horse use to be part of the Queen’s Life Guards and decides to join its former equine colleagues as they parade through London.

When you visit London you can watch the same parade as it passes Hyde Park Corner and The Mall by Buckingham Palace for the Changing of the Life Guards ceremony on Horse Guards Parade.  They’re part of the Household Troops that have guarded the kings and queens of the country and the Royal Palaces since 1660.

After reading MADELINE IN LONDON children can spot which troops belong to the Queen’s Life Guards: they wear red tunics and have white plumes in their hats. The Blues and the Royals, also part of the Household Cavalry, wear blue tunics with red plumes.

In a scene in the book depicting what looks like the Trooping the Colour in the courtyard in front of Buckingham Palace, you actually would need to be in London in June for the military pageant. It marks the official birthday of the Queen. This year it takes place on June 15, 2013.

For more children’s books on London if you’re visiting with kids, have a look at Part 1 and Part 3 in this series.

Changing of the Guard: photo credit: nickirp via photopin cc