Privacy Policy
You are here: Home / Living / Children’s Books on London to read for a visit: Part 1 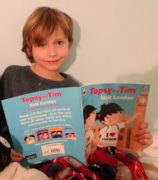 Visiting London with kids? Forget the guides and read these children’s books on London if you want some good tips on where to take them and what to do.

It’s also a great way for kids to look forward and enjoy their trip to London.  They’ll recognise places and become more interested in visiting the city sights after reading about London first in books.

Top of the list for young children is TOPSY AND TIM VISIT LONDON by Jean Adamson.  It was published in 2012 so it’s up-to-date with the top attractions for kids in London.

As my kids, Theo and Luce, were born in London and lived there until recently, whenever I read this book to them they start talking about a place they loved visiting.

My daughter Luce shudders at the memory of the roaring animatronic Tyrannosaurus Rex when Topsy and Tim see the dinosaurs in the Natural History Museum.  By the way, the museum is free but for a small fee you can buy Explorer and Discover guides for kids suited either for ages 5 to 7 or 8 to 11 years old.

Or I’m in trouble if we haven’t been to one of the locations mentioned in this children’s book on London. For example, last time I read it to them, Theo asked me why we’ve never been on the London Eye.  Definitely on my list when we next go back.

Topsy and Tim, of course, explore top London tourist attractions like the Tower of London or watch the changing of the guard at Buckingham Palace.

A boat ride even takes them to the Treetop Walkway in Kew Gardens.  The Royal Botanical Gardens in Kew is over 250 years old and one of the world’s most famous gardens.

On another day’s outing the twins, Topsy and Tim, get to swing, paddle, climb and dig in the Princess Diana Playground in Kensington Gardens. It includes a pirate ship inspired by Peter Pan and was built as a memorial to Diana, Princess of Wales.

The playground is near Kensington Palace, the new home of Prince William and his wife Kate, Duchess of Cambridge.  Why not take a break with the kids and have afternoon tea at the palace?

These are all great places for you to take the kids. You’ll find a lot of British parents, including London families, taking their kids to the same fun spots to keep their kids entertained.  In other words, they’re cool for kids in Britain too.

THIS IS LONDON by Miroslav Sasek

A classic first written in 1959, although the same queen still reigns!  In my view this book is also fascinating for parents who are reading children’s books on London to see what’s changed in the last 50 plus years.

There might not be any more bankers wearing bowler hats (known as Derby hats in the US), but the author is right that the City of London is still the ‘heart of London,’ particularly as a financial centre.

The author Sasek explains that the City of London only has six thousand inhabitants – actually now just over 7,000 according to the 2011 census – but he’s talking about what’s known as the Square Mile.  This is the financial heart of the city, sort of like Wall Street.

The City is a small area of London which has the world’s oldest continuously elected government, own constitution and own lord mayor of London, and is viewed separately from the rest of London which has a population of over 8 million people and a different mayor.

Lots of the places highlighted in this book are also in this small area such as the Tower of London, Bank of England, St Paul’s Cathedral, the Monument and Tower Bridge.

There are other fun tidbits in the book.  It has an illustration of the shop LOCK & CO where the best bowler hats have been made since 1765. The shop is still there, and is considered the oldest hat shop in the world, but bowler hats were first designed in 1850.

As THIS IS LONDON is still very popular, there’s a back page with recently updated information on what has changed since 1959.

Find out about more children’s books on London in Part 2 and Part 3 of this series.