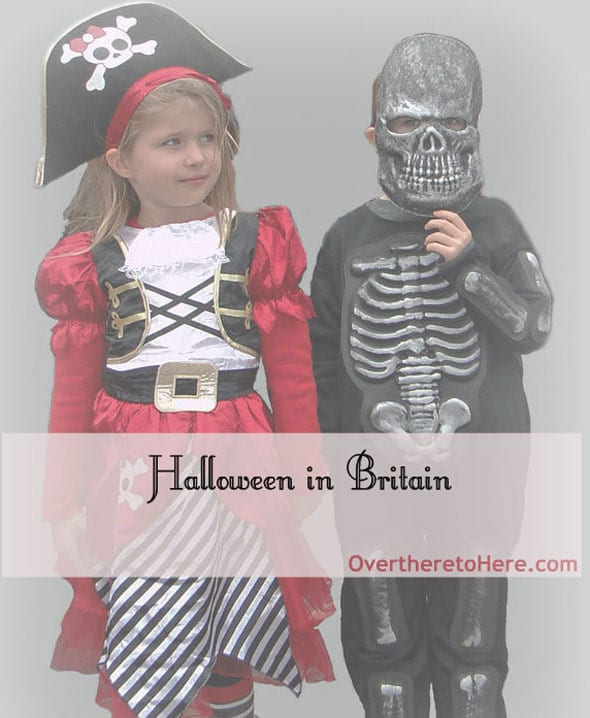 The first time my kids went out trick or treating for Halloween in Britain, was just as thrilling for me as them. Why? I had never experienced the excitement of putting on a scary costume and going door to door on October 31st as a kid in England. No, the only time I had the pleasure was when I was 9 years old and briefly living in the USA. There were no Halloween parties at boarding school in the South West of England. No festivities for me in London either. I never collected or devoured a bag full of sweets (candies).

I used to buy lots of treats to give away from my home in central London but no one came knocking on the door despite the lit pumpkin in the window. I remember clearly the year it changed for me. It was 2006. Suddenly there were non-stop knocks at the door.

And this wasn’t me having a foggy memory. According to Planet Retail, UK spending on the Halloween festival has boomed in the last decade. In 2001 only £12 million (about $19 million ) was spent on Halloween stuff compared to over £300 million (about $480 million) in 2012.

A lot of Brits have been rather grumpy at this change. Some of them view it as American consumerism and culture taking over. There have even been newspaper headlines complaining that it is a “frightful US import.”

But Halloween – or Hallowe’en or All Hallow’s Eve – is not new in Britain. In fact its origins appear to have come from different pagan and Christian traditions in the British Isles. Irish and Scottish immigrants first imported it over to the US in the 19th century. Have a look at Wiki here for starters if you want some of the debated history.

Queen Victoria celebrated Halloween at her royal residence in Scotland which included torch-lit processions and bonfires. Agatha Christie published one of her mysteries in 1969 called “Hallowe’en Party” about a murder at a children’s Halloween Party. The Scottish poet and lyricist Robert Burns wrote his famous poem “Halloween” in 1785.

My children were only three years old when they enjoyed their first Halloween party and played bobbing for apples.

I missed out as a kid probably because I was living in the wrong part of Britain. In a 1986 book on The Customs and Ceremonies of Britain it describes how: “All over northern and western Britain…witches and supernatural beings are still remembered (and impersonated) by the bands of disguised children who roam the streets with turnip lanterns knocking on doors to beg for sweets or pennies.” The author then complains how these children have started to threaten homes with ‘Trick or Treat’ … “an American custom which originated in Britain.”

So basically the Brits have been getting annoyed at the Americans for importing British customs. Partly because so many other British traditions taking place around the end of October and beginning of November have become mish-mashed with Halloween. Such as “Punky Night” when kids in Somerset carried carved and lit pumpkins collecting money. Or “Mischief Night” when kids carried out pranks in their neighbourhoods. Or ‘souling’ which started in the Medieval ages as chanting door to door for food in return for prayers for the dead then turned into a local custom for kids. Or the Scottish tradition of ‘guising’ where children roamed the streets in costumes. Or…

Joining up with some other friends on my first Halloween in Britain trick or treating, we led our kids around the local streets. Our kids gleefully ran up to every house which was decorated in ghostly paraphernalia or lit up with pumpkins in the window. The streets were jam-packed with groups of parents taking their little devils and witches house to house.

But, if a house was dark or had no decorations you basically avoided it. Police stations across Britain provide posters or print outs online that people can put on their front doors telling trick or treaters to go away. I actually didn’t notice any as I was too busy chasing after my kids as they ran up and down the streets looking for spooky welcomes.

Halloween is now a big deal all over Britain. From annual celebrity fancy dress parties to huge sales at the major supermarkets it’s been exported and imported and now sticking. This year there was an outcry over ‘mental patient’ costumes being sold as Halloween attire by Asda and Tesco – which they then quickly removed. The popular British blogger Mummy Barrow had an excellent post explaining why it was considered offensive.

So when we move back my kids will still enjoy Halloween in Britain, not knowing or caring where it originated from.