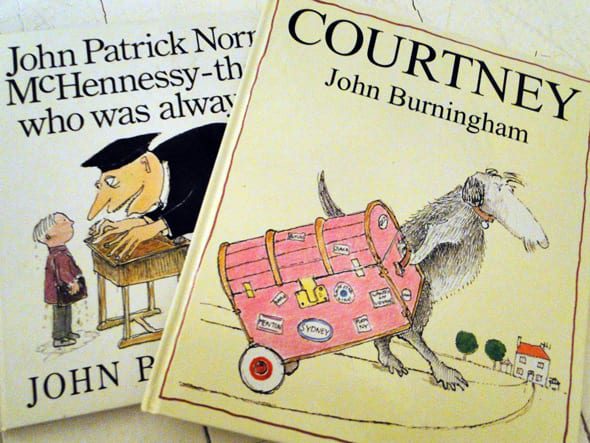 I recently discovered John Burningham.  Yes, I admit I used the word discovered . John Burningham is one of Britain’s most prestigious authors and illustrators of children’s books but I hadn’t really known about him. Then last year my sister gave me stacks and stacks of children’s books that her kids had outgrown.  Two of her three children are in their early twenties.

Amongst the stack I found two which were unusual, fascinating, wonderful to read and had illustrations that stood out from the others. These two books were both by John Burningham:  COURTNEY and  JOHN PATRICK NORMAN McHENNESSY – THE BOY WHO WAS ALWAYS LATE  And I realised we need to rediscover him. 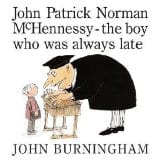 I loved that one of them was signed by my parents as a present to their eldest granddaughter, my niece, and my children’s older cousin.  The other was also for my niece but signed by John Burningham himself. 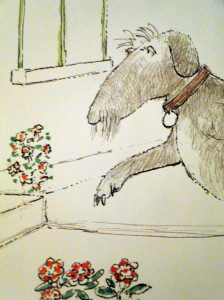 Let’s start with COURTNEY by John Burningham.  The children in the book describe Courtney perfectly when they go to the police after he disappears and say, “He’s quite old, with big eyebrows. He can play the violin, cook wonderful dinners, and he juggles to entertain the baby.”

After persuading their parents to allow them to choose a dog from the Dog’s Home, they bring back the dog that nobody wanted. Their parents are rather horrified by the old mongrel, because he’s not a proper dog. But Courtney cooks, plays the violin, cleans the house and saves the baby when the house is on fire. Then he disappears.  The snobbishness of the parents returns as they tell the kids he was unreliable because he was not a thoroughbred.

We only see a vague outline of Courtney again before the end of the book.  On the horizon of a mountain.  That is after the three children are saved by ‘something’ unseen that brings their boat back to the shore after drifting out to sea.

My kids were shouting out “it’s Courtney” during the rescue scene with the unknown ‘something.’ Like the kids in the book, they loved this unwanted and old mongrel and had no pre-conceptions.  I didn’t have to explain more to them. 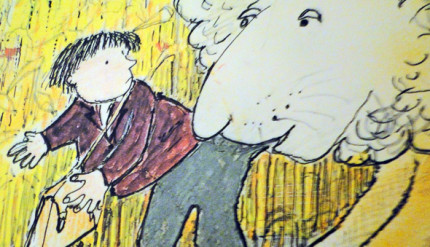 Once again in JOHN PATRICK NORMAN McHENNESSY – THE BOY WHO WAS ALWAYS LATE there’s a bit of two fingers up at authority.  Before the story even starts the Latin phrase utsementem feceris, ita metes  is subtly written at the top of the copyright page which includes a list of previous books written by John Burningham.  I studied Latin at school, but I’m afraid I had to look it up:

As you sow, so will you reap

The book is all about John Patrick Norman McHennessy who is seen on various long walks heading to school “along the road to learn.”  This entails encountering a crocodile coming out of a drain, a lion coming out of the bushes and a tidal wave from a river. So, of course, he’s always late for school. John Burningham doesn’t show the usual idealistic version of a caring teacher, but instead has an old fashioned schoolmaster with a waving cane who yells at John Patrick Norman McHennessy for being late and telling terrible lies.

I, like John Patrick Norman McHennessy, on far too many numerous times had to write hundreds and hundreds of lines as a punishment. This was when I was an eleven year old student at my first boarding school. Thus I was rather pleased that the kid in the book ignored his teacher when the latter was being swung around by a hairy gorilla.  As you sow, so will you reap. 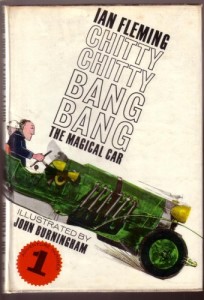 I think it’s the illustrations that also make these books just wonderful.  Not surprisingly, I also found out that John Burningham was the original illustrator of Chitty Chitty Bang Bang: The Complete Adventures of the Magical Car by Ian Fleming (yes, the author of the James Bond spy novels).

John Burningham, born in 1936, has written and illustrated over 50 children’s books and is a two-time winner of the Kate Greenaway Medal for the distinguished illustration of a children’s book. His wife, Helen Oxenbury, is also a famous illustrator of children’s books such as the brilliant WE’RE GOING ON A BEAR HUNT.  They collaborated for the first time with the 2012 book THERE’S GOING TO BE A BABY.

Turns out I had read another of John Burningham’s books to my children.  When they were tiny I use to make them mashed avocado with bananas and consequently had bought AVOCADO BABY by John Burningham to read to them. It’s about a baby who becomes super strong after eating avocados.

Now that I’ve discovered him, I want more.  My advice is you need to discover him too.  And if you are already know him well and you discovered him long ago, then let me know which other children’s books by John Burningham I should next get? Or which is your favorite?

These books are available on my Amazon affiliate links:

Courtney by John Burningham   US Amazon   or   UK Amazon 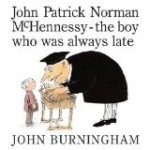 Avocado Baby by John Burningham US Amazon or UK Amazon

Previous Post: « Private school admissions in London start when they’re newborn?!
Next Post: Wildlife in my garden in the Hamptons »