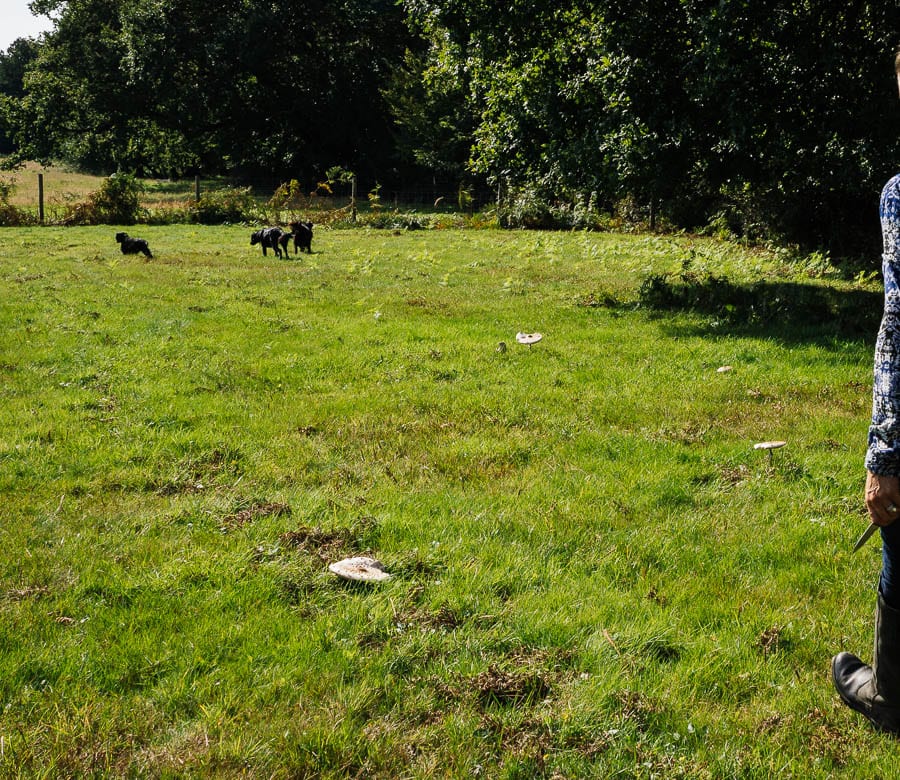 When a friend invited me on a walk with a mushroom foraging expert, I eagerly tagged along. In the autumn she likes to search for edible mushrooms on her land to make culinary delights in the kitchen. She wisely prefers to have a knowledgeable guide with her to make sure she doesn’t accidentally pick any poisonous fungi. I just wanted to learn more about mushrooms.

I wasn’t planning an attack or raid

Now you might have noticed I’ve called it a mushroom foray and forage in the title. My friend was ‘foraging’ for edible wild mushrooms. I was on a ‘foray’ to find out more about the fascinating world of fungi. The Oxford Dictionaries defines ‘foraging’ as “Obtain food or provisions by searching” and a ‘foray’ as “A sudden attack or incursion into enemy territory, especially to obtain something; a raid.” I wasn’t planning an attack or raid I just wanted to join the walk and learn more about mushrooms.

Foray among the Funguses

I noticed in research that mycologists describe going on forays in their quest to study fungi and was curious at how this noun – foray – had developed a new meaning in relation to mushrooms. Turns out it was first used by the Woolhope Field Naturalists’ Club in Hereford in October 1868 when they described their mushroom hunt as a “Foray among the Funguses”.

“So few people take any real interest in the beautiful tribe of Agaric – autumn’s flowers though  they may be – ànd all the other varied and interesting funguses which abound in our fields and woods at this season, that it seemed questionable whether any attempt to promote their study and their usefulness would meet with success… whatever doubt may before had existed, the “Foray amongst the Funguses” carried out by the club has satisfactorily removed it…It was a day of real work in the field, a day in which more progress could be made in the practical knowledge of the fungus tribes than, could be obtained from weeks of work with books alone.” Transactions of the Woolhope Naturalists’ Field Club – Friday, Oct. 9, 1868

These naturalists then had a dinner feast with many of the fungi they had found on their foray! Even back then they had experts on their hunt who helped them identify the fungi they found and answer any questions.

Forage with an expert 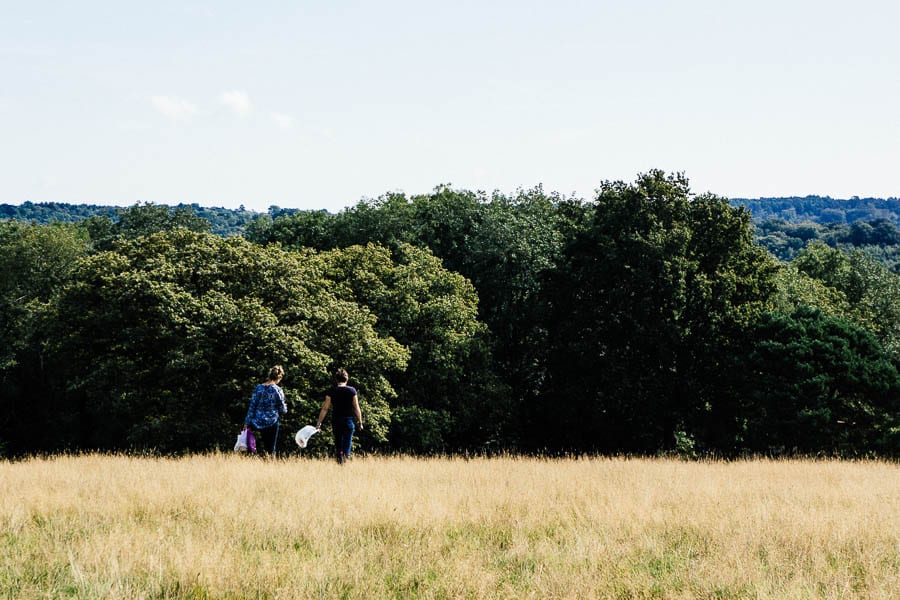 On our walk – a foray as well as a forage – we were given advice by Cindy Colman whose years of experience includes mushroom hunting for top chefs. 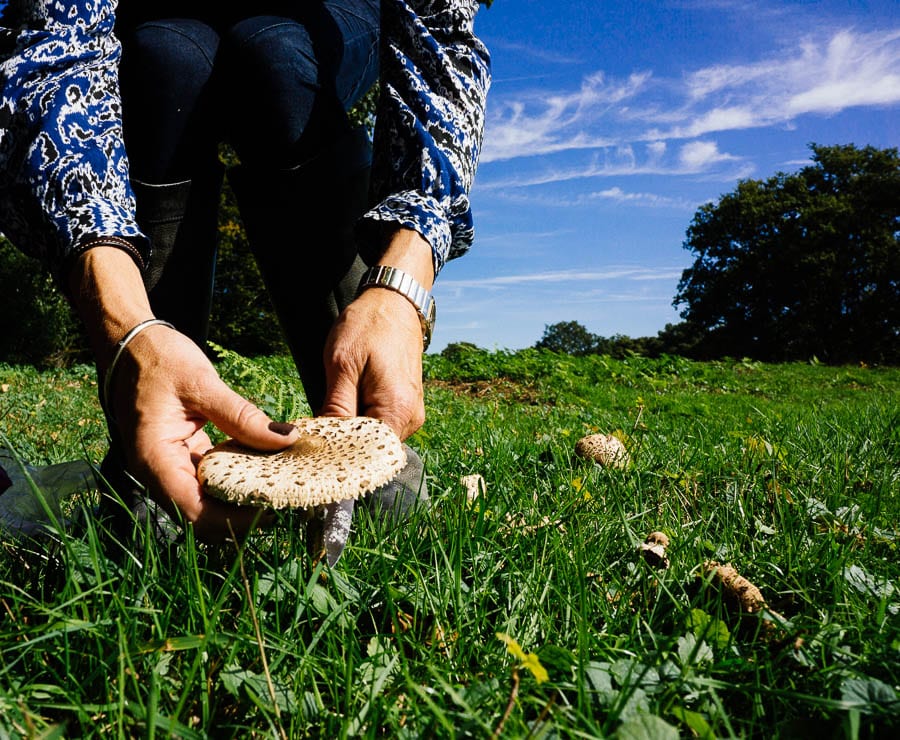 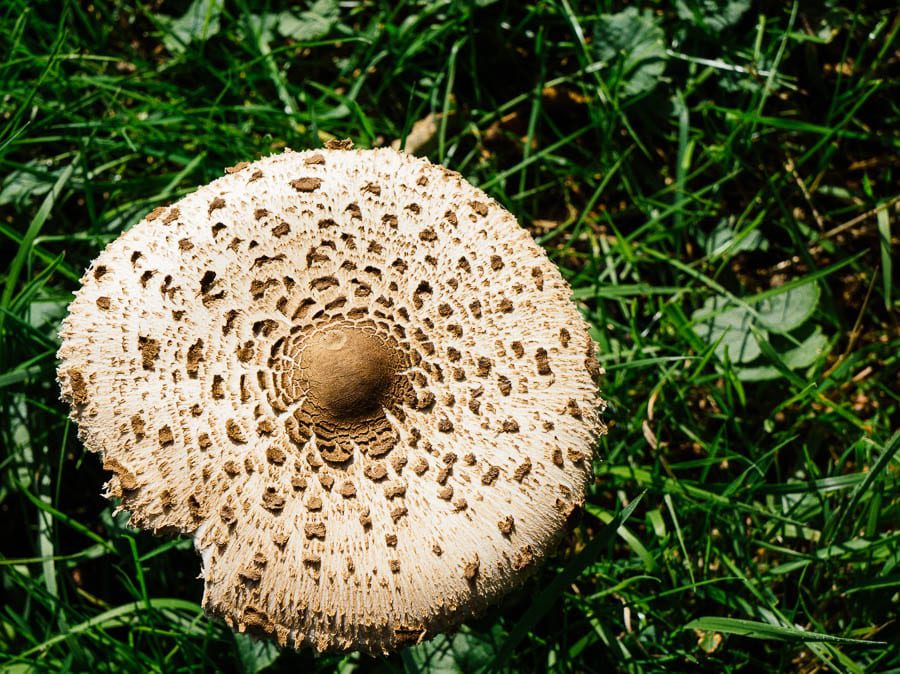 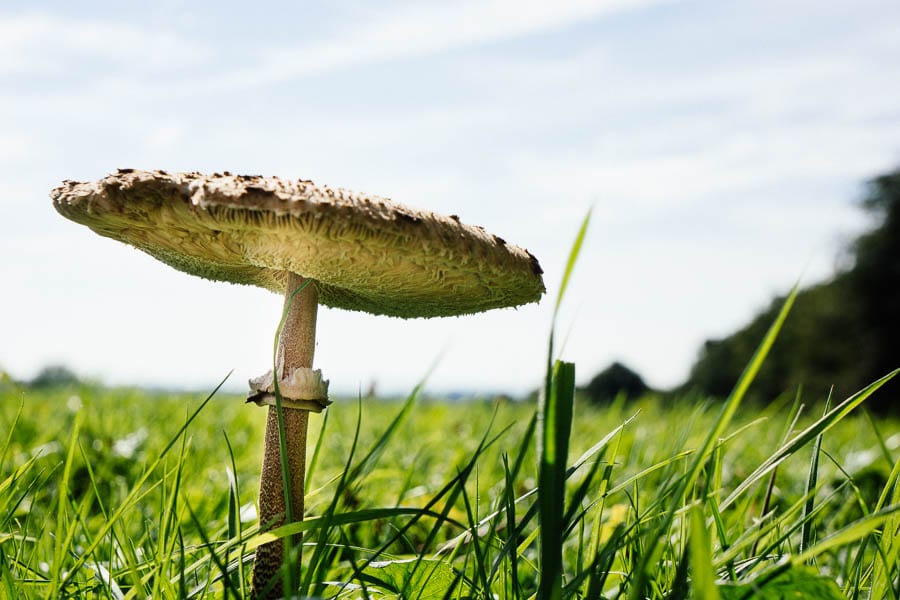 We first walked around a field where we found a couple of different areas with large meaty Parasol (Macrolepiota procera) mushrooms. Parasols’ caps are a drumstick shape before they open up.

Many mushrooms can be mistaken with some poisonous relatives so once again make sure you have a local expert or proper advice before foraging for them and cooking them for dinner. Wild mushrooms can be lethal so it’s important to have any picked properly identified.

“…while many mushrooms growing in the wild are tasty and safe to eat, it is not always easy to differentiate between toxic and non-toxic species even for people with experience in foraging. That’s why we say that people should not eat mushrooms collected in the wild unless they are very familiar with the various types that grow in the UK and are sure that the mushrooms that they have collected are safe to eat.”  Warning by Dr John Thompson, Director of the NPIS (National Poisons InformationService) unit in Cardiff 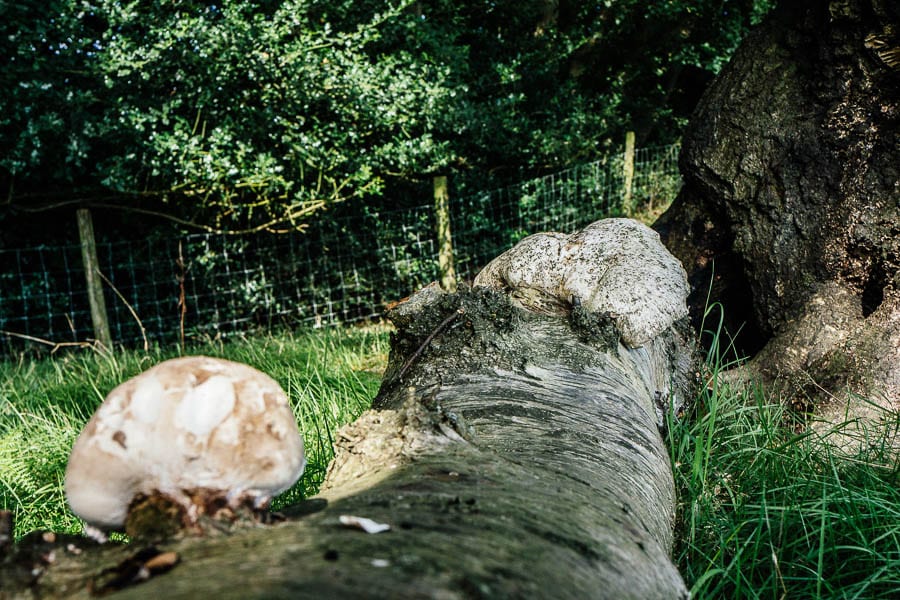 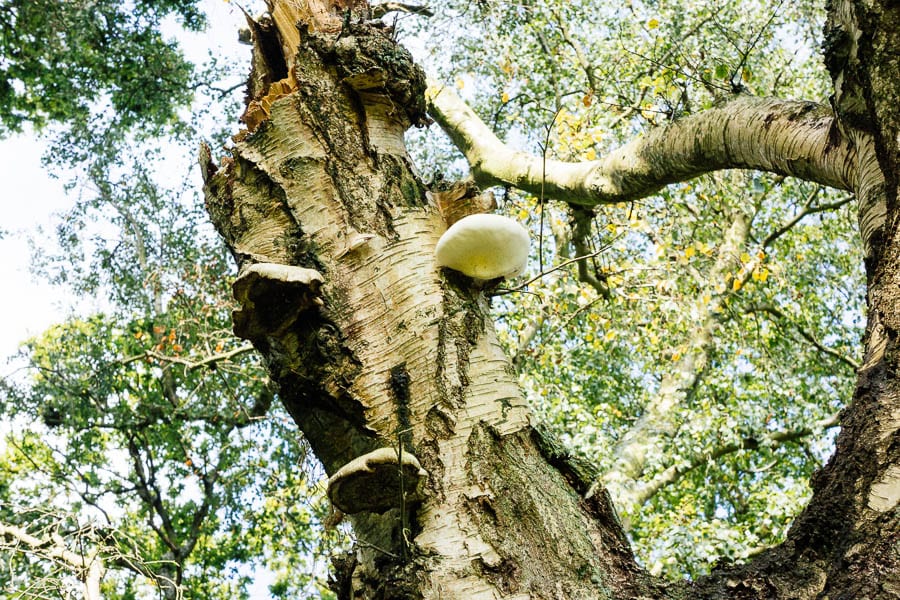 We spotted some fungi on a rotting tree trunk but I was told as an amateur it’s better to avoid them unless you really know your fungi. Same advice for fungi growing on a tree. Of course there are some edible fungi growing on trees – like Chicken of the Woods – which are considered a gourmet treat. 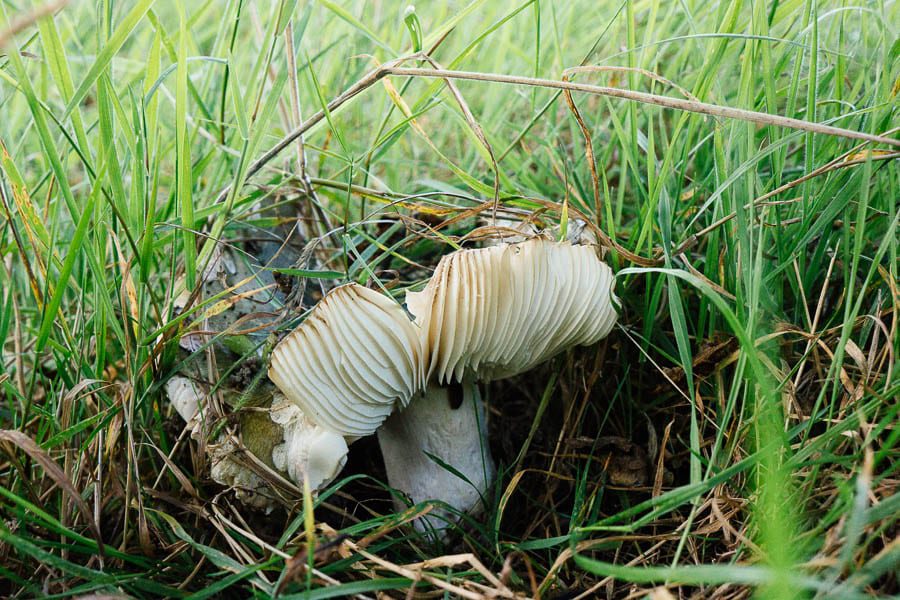 Cindy also explained that large white gills on a mushroom often are a warning sign that we shouldn’t pick them.

“If the gills are white then the mushroom is possibly poisonous. The cap and gills of the Destroying Angel, the Spring Amanita, the Clitocybe Dealbata and the Clitocybe Rivulosa are all white, and all are deadly. So a white mushroom with white gills is generally something to avoid.” According to advice from Wild Food UK 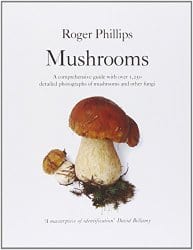 If you’re looking for a book filled with photos to identify mushrooms, then one of the top guides is Mushrooms written by Britain’s foremost expert on mushrooms Roger Philips. It’s a comprehensive guide with illustrations of mushrooms in all different phases. Philips also has focused on North American species in his book Mushrooms and Other Fungi of North America. 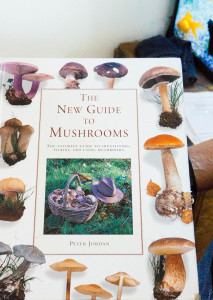 Cindy always also brings with her an old favourite mushroom book which contains photos of popular edible mushrooms, recipes as well as a guide on poisonous and inedible species of fungi called The New Guide on Mushrooms.

Fungi have their own kingdom

There are more than 15,000 different fungi species in the UK including about 4,000 which are mushrooms or other large fungi. It’s estimated that there are more than 1.5 million species of fungi worldwide which are now classified in their own kingdom, and not with plants like in the past.

“Fungi belong to a separate kingdom to both plants and animals, and are quite different to both. It is a large kingdom, with over 15,000 species believed to occur within the United Kingdom.  As well as the more familiar mushrooms and toadstools, the fungal kingdom includes a wide range of life-forms including yeasts and pathogens.” Information from the Joint Nature Conservation Committee 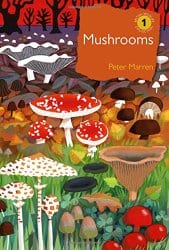 A highly recommended book for the amateur naturalist wanting to know more about mushrooms is Peter Marren’s Mushrooms.

What did we find? 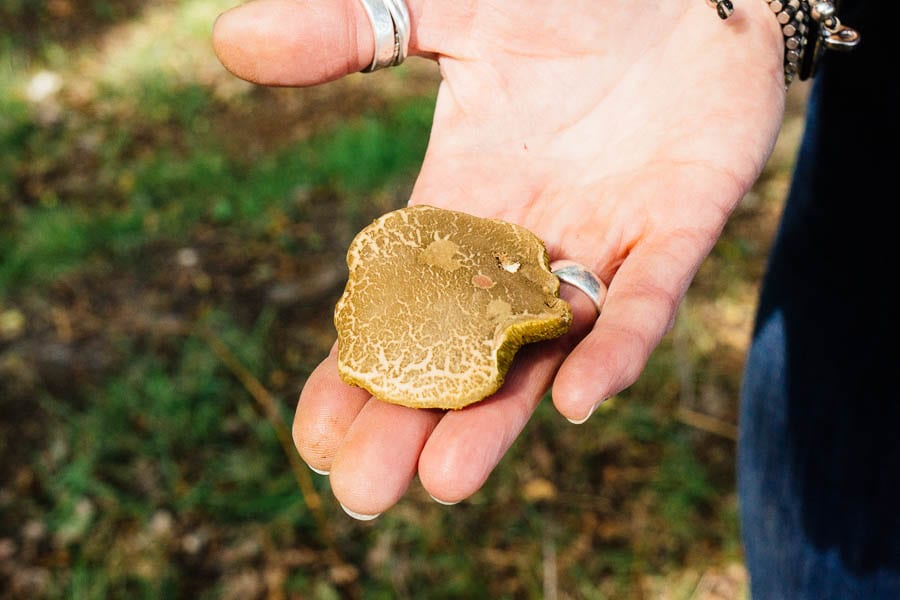 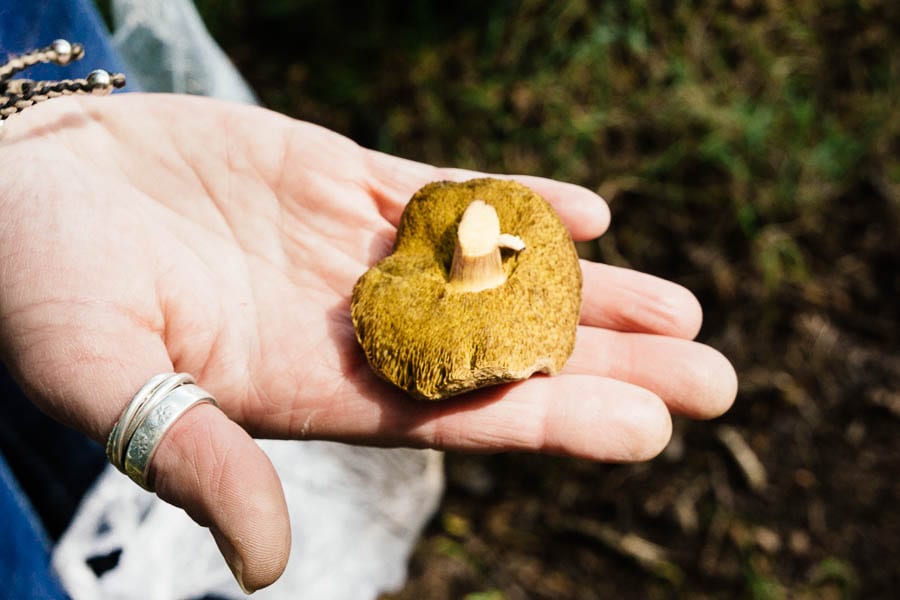 One lone Red Cracked Bolete was found in the pastureland. It’s apparently edible and not bad in stews or risottos but not to everyone’s taste. 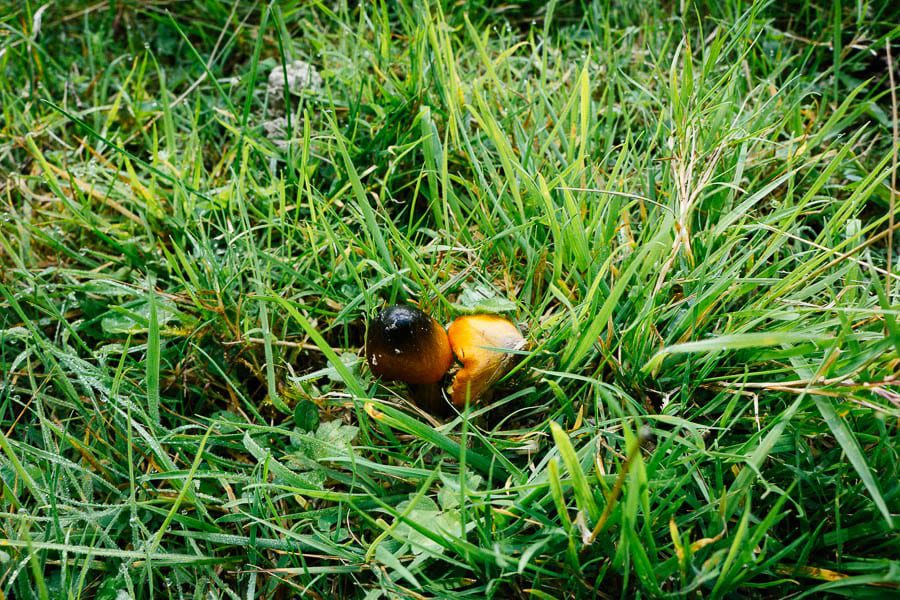 I also took a photo of what looked like Blackening Waxcaps – once again not of culinary value. (Note – I’m not sure about this identification either!)

It’s still early autumn so we managed to only gather edible Parasols during our walk. As it was on my friend’s private land we didn’t have to worry about picking the mushrooms or that all the tasty edible ones had already been picked by commercial groups seeking wild food. There’s growing concern about the popularity of mushroom foraging and collecting in some areas of Britain such as in the New Forest. Mushroom picking for personal or commercial reasons is strictly prohibited in Epping Forest, near London, due to fears that it is damaging ancient trees which rely on different types of fungus to protect their roots.

The mushrooms we pick are just the ‘fruit’ bodies of fungi sticking out of the ground. Fungi feed off living or dead organic material via an underground network of threadlike forms called hyphae.

“Fungi are an important but unappreciated part of our world. Many of them are beautiful, some have intriguing smells – but most are quietly recycling nutrients and helping to run the planet without us noticing them. They’re a diverse group of living things and they do vital stuff that benefits the whole ecosystem. Without them, many plants and animals would not be able to exist.”  Explanation by Martin Harper, the RSPB’s director of conservation 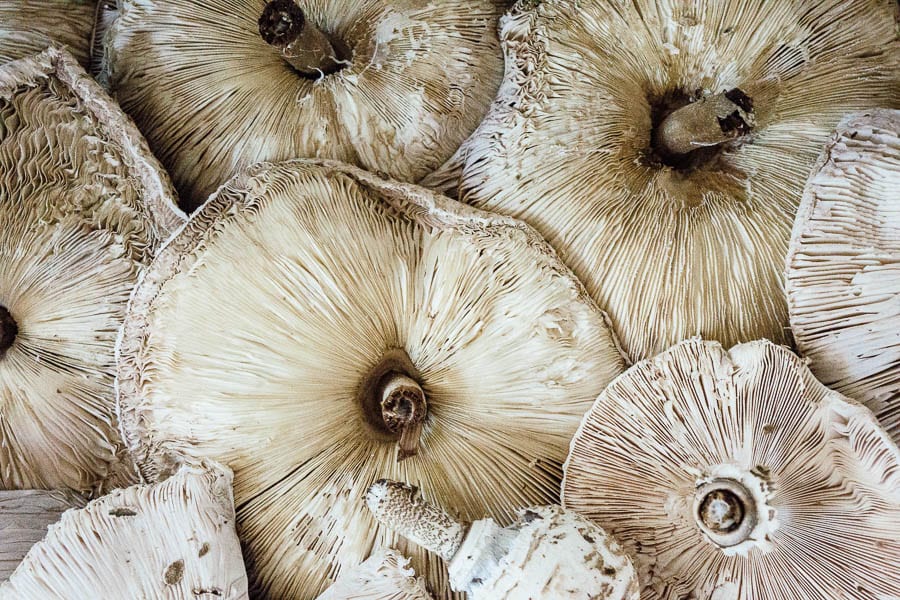 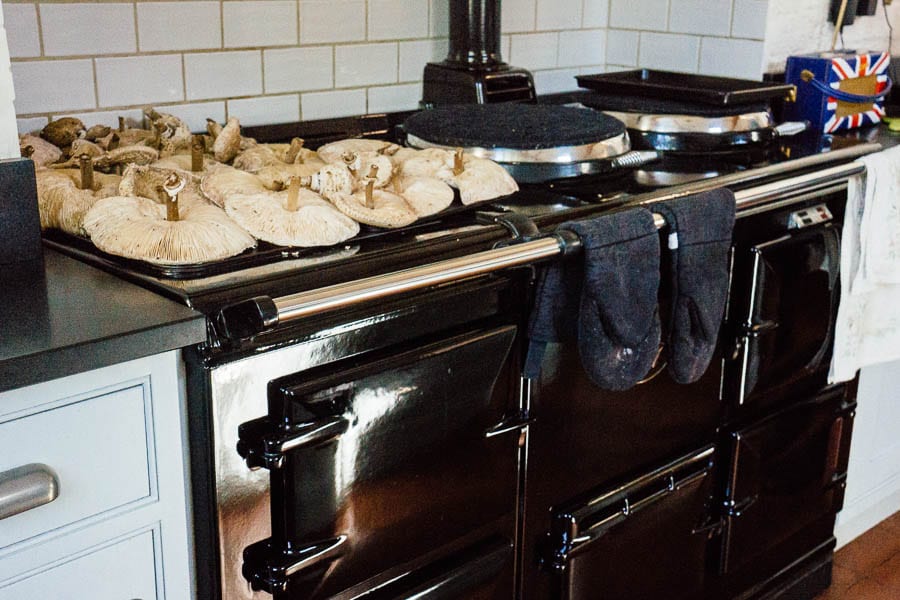 Back at the house it was time to dry out the Parasol mushrooms. There are some exceptions – such as Chanterelles, Oysters and Matsutakes according to my kitchen bible McGee on Food & Cooking – but drying intensifies the flavour and is the best way to store mushrooms for later use. 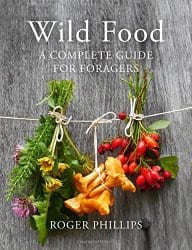 If you like foraging for wild food and are seeking some good recipes, then the book to get is Wild Food also by Roger Philips. Indeed I gave a copy to my friend as a Christmas present! It also includes a great recipe for Parasol mushrooms.

I’ll soon be taking my twins on another mushroom spotting walk. It’s a great way for them to observe and discover more about the mysterious world of fungi.

If you are interested in learning more about fungi and their vital role in the eco-system then the National Trust regularly organises mushroom forays. If you’re interested in field mycology or fungus foraying you can find events or local groups through the Associaton of British Fungus Groups. If you plan to forage for edible wild mushrooms make sure you’re with an expert guide or group and also double check in books by the mushroom experts. But don’t rely on the internet for identification as too often images are labelled incorrectly – and that could be deadly.

I’d love to hear your recommendations for a mushroom foray or foraging walk.

Previous Post: « This version of Beauty and the Beast…
Next Post: Scavenger Walk in the Woods – Autumn / Fall »