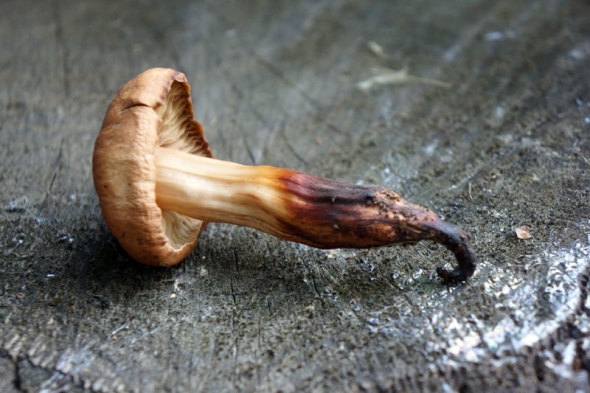 As September to November is mushroom season, I recently went mushroom hunting with my kids. But…and this is a big ‘but’…we didn’t pick, touch or eat any of them. I’m no expert in mushroom or fungi. I know that mushrooms are all fungi, but not all fungi are mushrooms. That’s about the extent of my knowledge. What I did teach my kids is that you should never pick, cook or eat wild mushrooms unless you have an expert foraging with you. And that I was not. 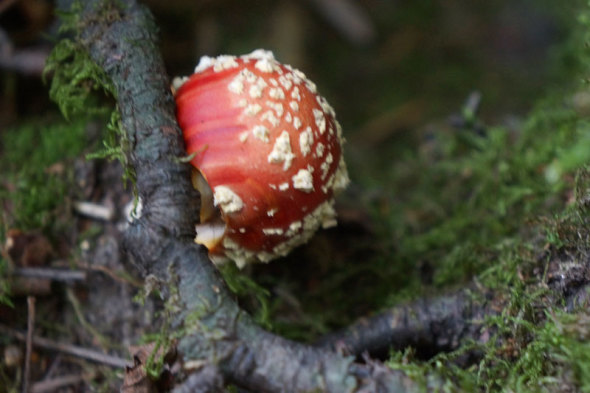 Some edible mushrooms even closely resemble deadly poisonous ones so better not to take a risk, I explained to them.

Is the photo above an Amanita Patherina (Panther Cap) or an Amanita Muscaria (Fly Agaric)? Both are poisonous by the way and the Panther Cap can even be fatal.  As far as kids are concerned they look like the classic toadstool in fairy tales.

In fact I’m not naming any of the mushrooms or fungi we found of which I have pictures in this post. I don’t want to accidently misidentify a mushroom or fungi and then have the image show up on the internet with the incorrect name. Not surprisingly The Times reported today that last year 237 people in Britain were poisoned by eating wild mushrooms and the numbers could rise this year.

So instead of mushroom foraging we went mushroom hunting. And lots of stomping. 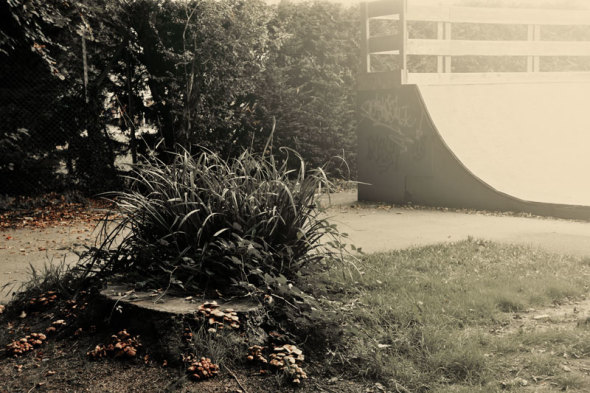 My kids noticed that mushrooms were growing everywhere when we recently saw them next to a skateboard park. 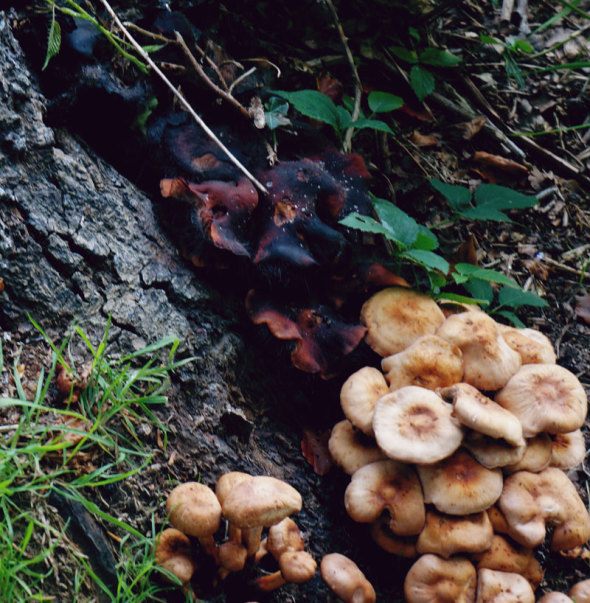 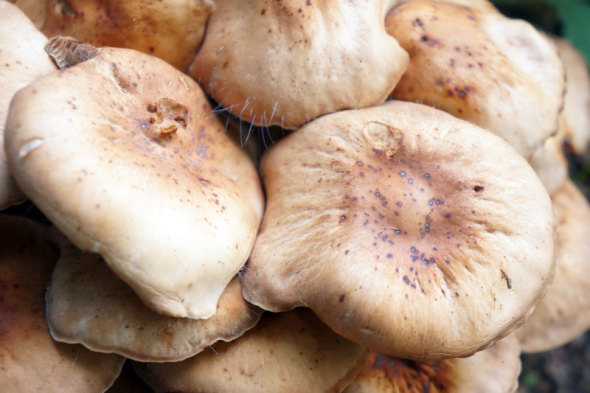 All different sizes that even had ‘hair’ sprouting on them or were decomposing.

Then a friend told us that there were Puffballs and Earthballs in their woods. Immediately my kids were excited about looking for them as they wanted to make them burst – not eat them! Off we went on our mushroom hunt. As soon as we were in the damp, dark woods, my two began noticing and finding mushrooms and fungi all over. 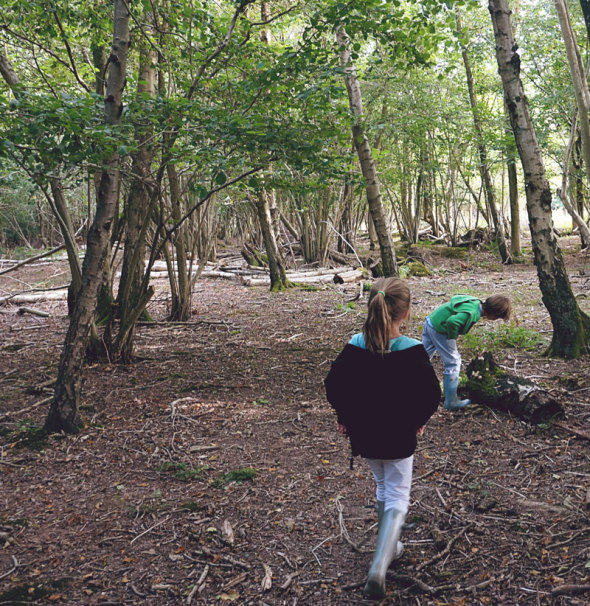 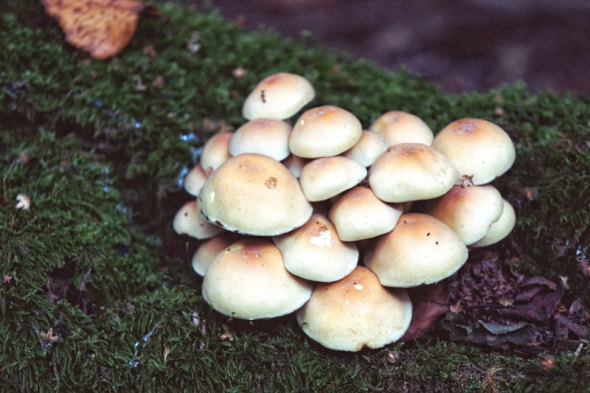 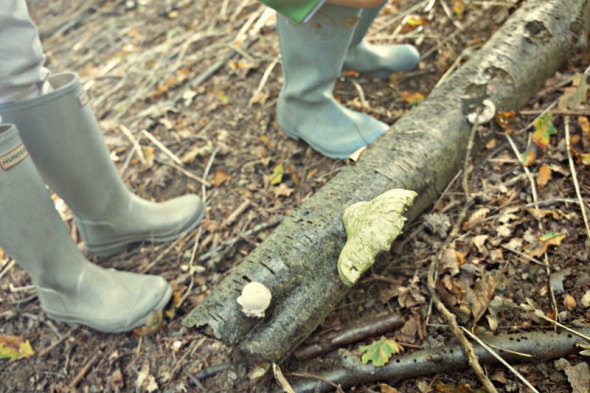 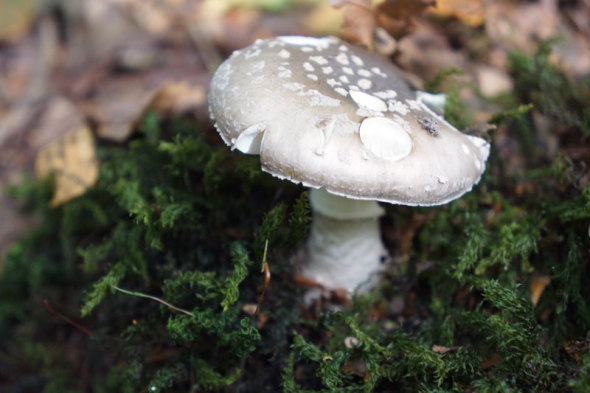 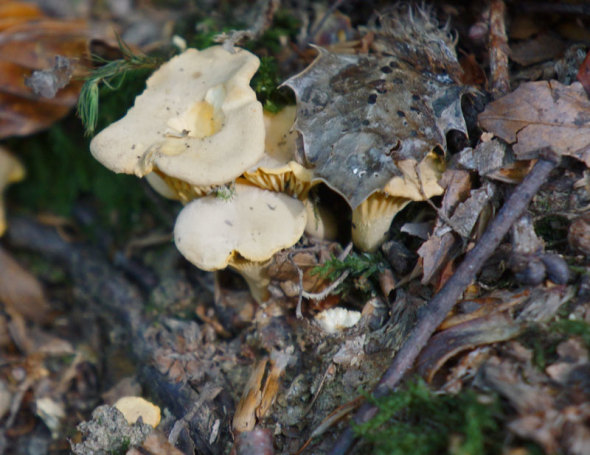 Soon they were running down paths and searching in the undergrowth in their quest for puffballs. Finally they found them amongst the ferns and in clusters deep in the forest. 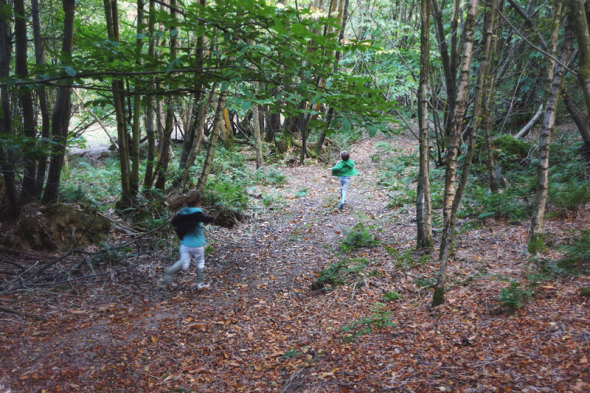 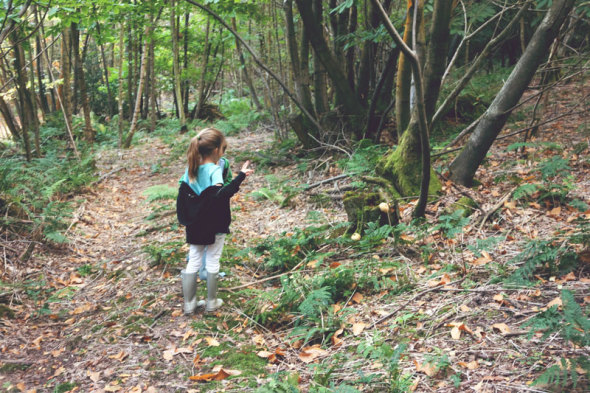 And then the stomping began. They wanted spore clouds not edible mushrooms. Personally I wasn’t sure which ones were puffballs or earthballs. Appearances also can change if they’re young or beginning to rot.  The Mushroom Diary blog has some great posts describing Puffballs and Earthballs such as this one on Common Puffballs. So, once again, here’s some photos but no identification in case I’m wrong! 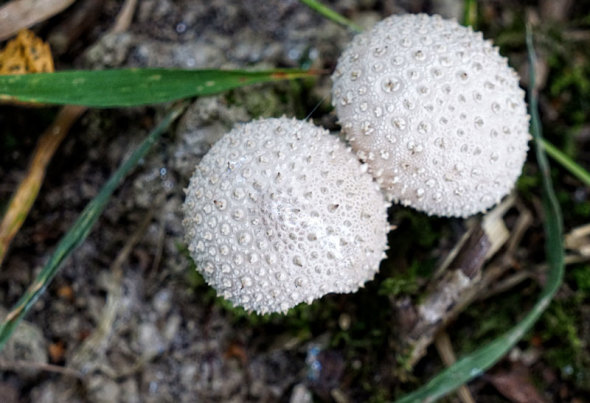 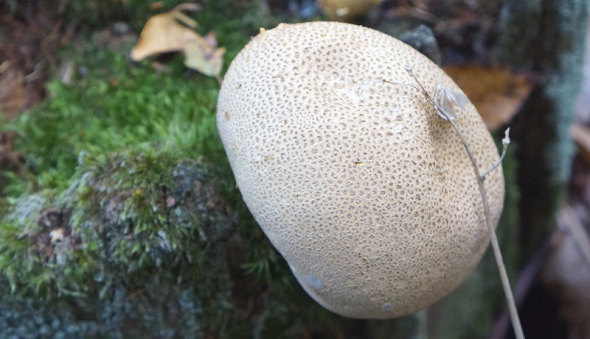 My kids didn’t care what they were called. They just went and stomped on them – each time hoping for the fungi to explode in a spore cloud! 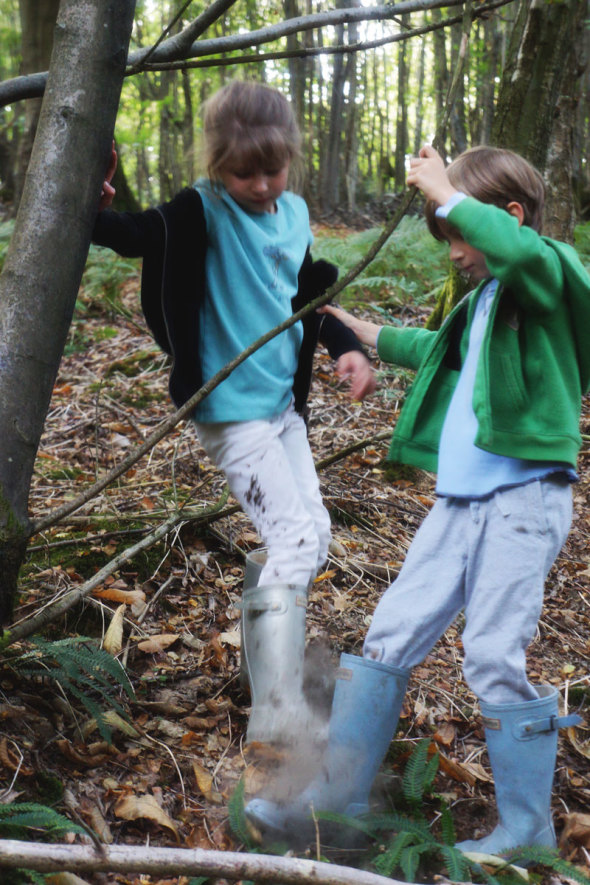 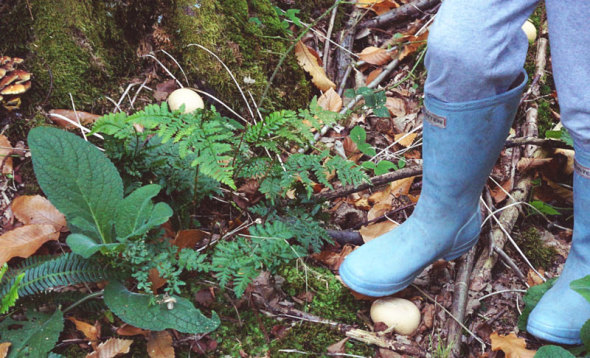 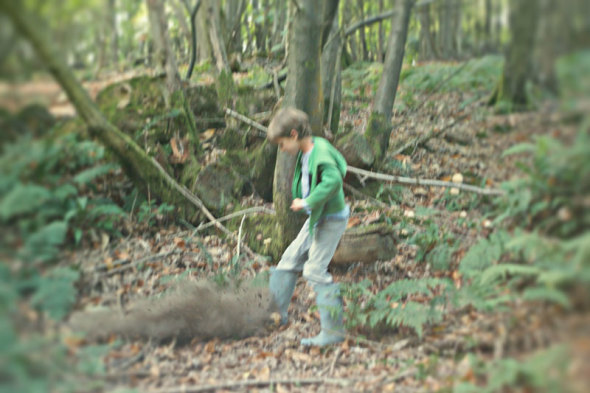 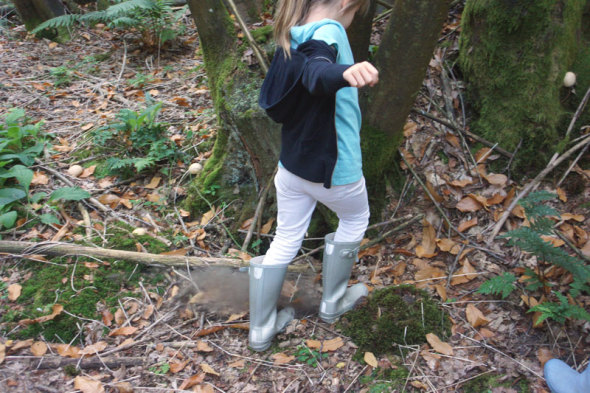 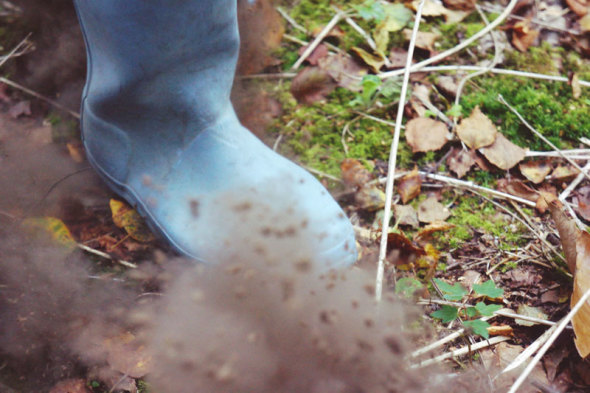 It wasn’t a mushroom hunt. It was a massacre! Black spores oozed out of what I think were Common Earthballs. 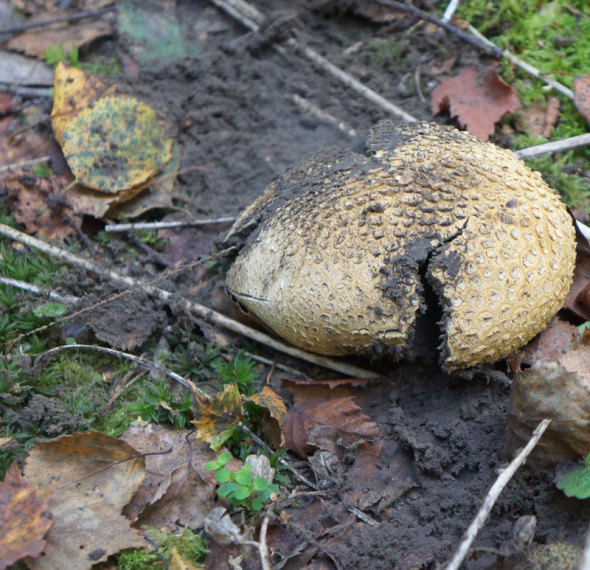 Then it was time to leave the woodlands’ mushroom and fungi and head back to the sunlight. 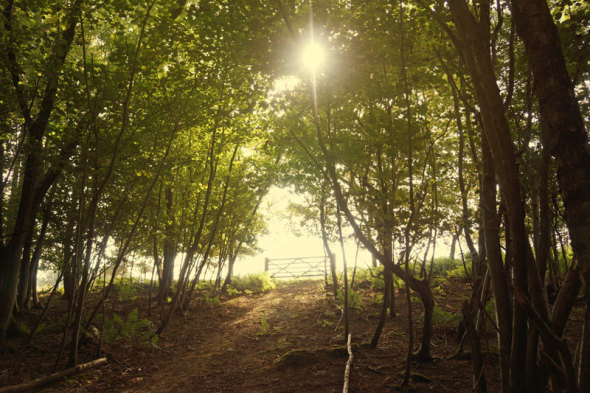 As soon as we arrived home I washed all their clothes. My children’s mushroom hunting adventure was over and we ate store bought white mushroom caps with dinner.