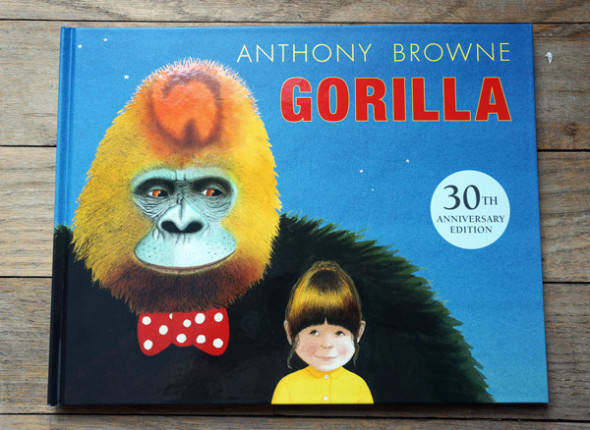 When Gorilla was published in 1983 it marked the breakthrough of Anthony Browne as a children’s author and illustrator. Now it’s viewed as a modern classic. Candlewick Press has released a 30th anniversary edition with a new cover illustration by Browne.

Gorilla won Anthony Browne widespread recognition and prizes – both in the US and UK – including the prestigious Kate Greenaway Medal, the New York Times Best Illustrated Children’s Book of the Year and the Boston Globe Horn Book Award.

Gorilla tells the story of a girl called Hannah, who’s passionate about gorillas, but has a father too busy to spend any time with her, let alone notice her. Her utter loneliness is accentuated in the illustrations whether they show her father working at his desk at night or Hannah sitting alone on the floor watching television. 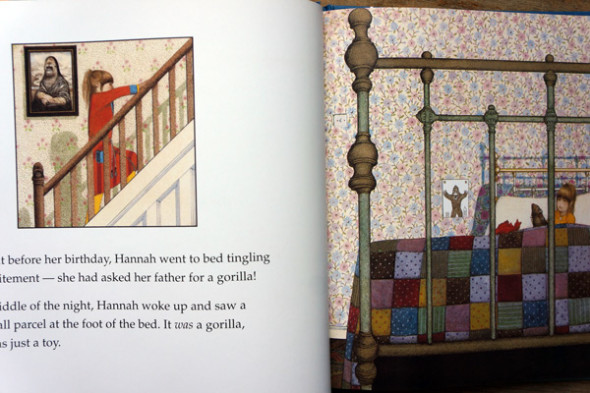 But then a toy gorilla, given to her on the eve of her birthday, transforms into a life size version during the night. Wearing her father’s hat and coat, Gorilla takes her on a wondrous moonlit adventure. There is a feeling of hope at the end of the book when her father celebrates her birthday with a kiss and an outing to the zoo. 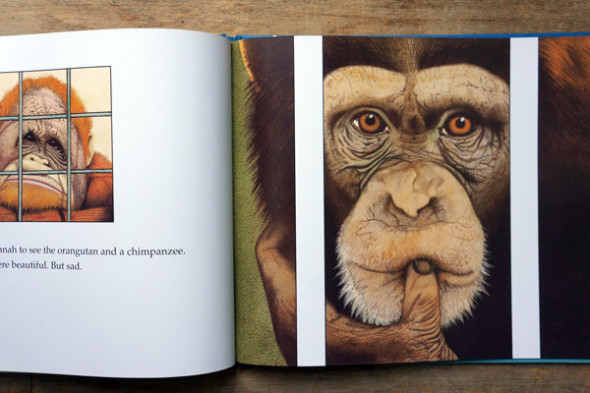 The illustrations in the book are often surreal but absolutely mesmerizing. Browne is known for depicting primates in his children’s books and his skills as an artist are seen in the almost lifelike images. The expressions, though, give them a human pathos. Gorilla might be huge and formidable looking but he’s portrayed as gentle and caring as he takes Hannah out, even dancing with her on the lawn.

My children especially loved looking for the numerous visual puns throughout the book. There are humorous sighting of gorillas such as in the Mona Lisa hanging on the stairway wall or Superman whizzing past the transformed Statue of Liberty on the movie screen.

Anthony Browne has published over 40 books and was UK’s Children’s Laureate from 2009 to 2011. He was also the first UK author since 1956 to win the Hans Christian Anderson Medal in 2000, the highest international honor for illustration.

With the help of illustrations that switch from dreamlike to hyperreal, my children felt and understood the emotional journey of Hannah as I read them the story. I can understand why Gorilla had such an impact when it was published 30 years ago and confirmed Anthony Browne as one of Britain’s most acclaimed authors and illustrators of children’s books. 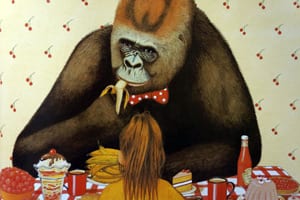 Gorilla by Anthony Browne is available on US Amazon and UK Amazon.