You are here: Home / Wild Kids / We’re going on a salamander hunt 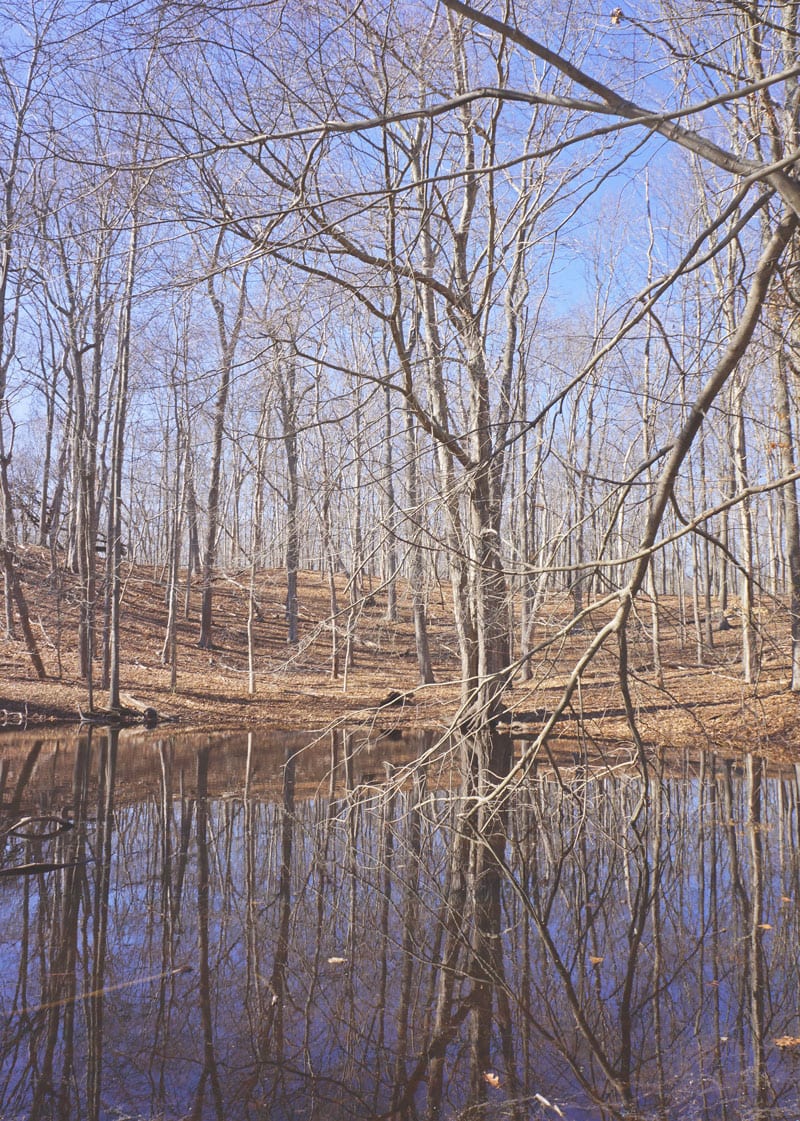 During the day trees reflect quietly in this vernal pool in the midst of the woods. In the summer it dries and disappears. But after a winter of ice the creatures of the night gather in its murky spring water.

We met up at the South Fork Natural History Museum and Nature Center (SOFO) and then drove in a convoy to Whiskey Hill. Some had driven hours to join us as we prepared to go on our mole salamander hunt. 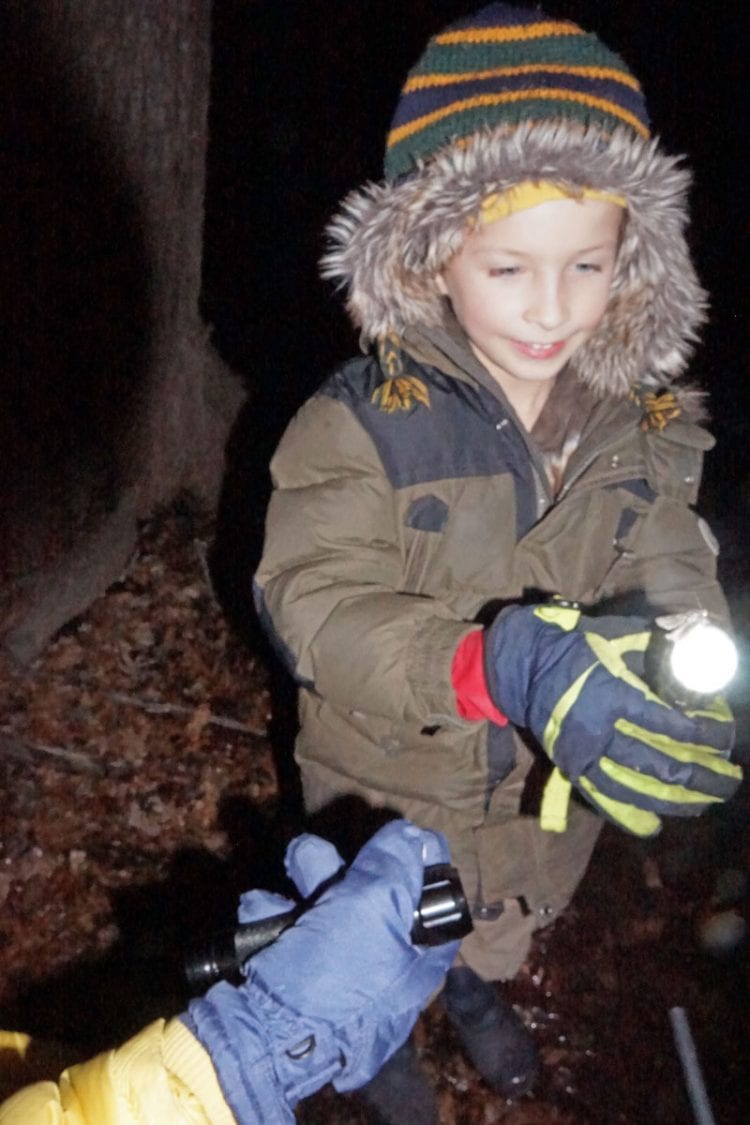 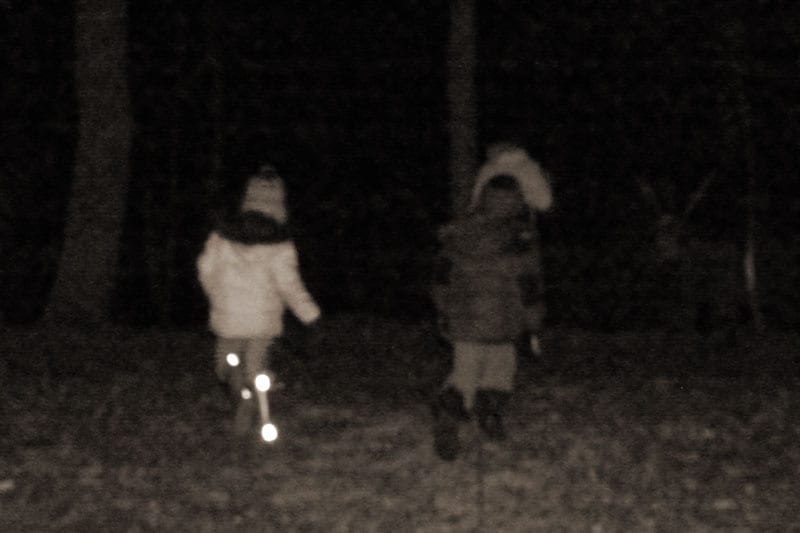 My kids excitedly shone their flashlights on the ground ahead as we climbed up a hill in the dark, dark woods. 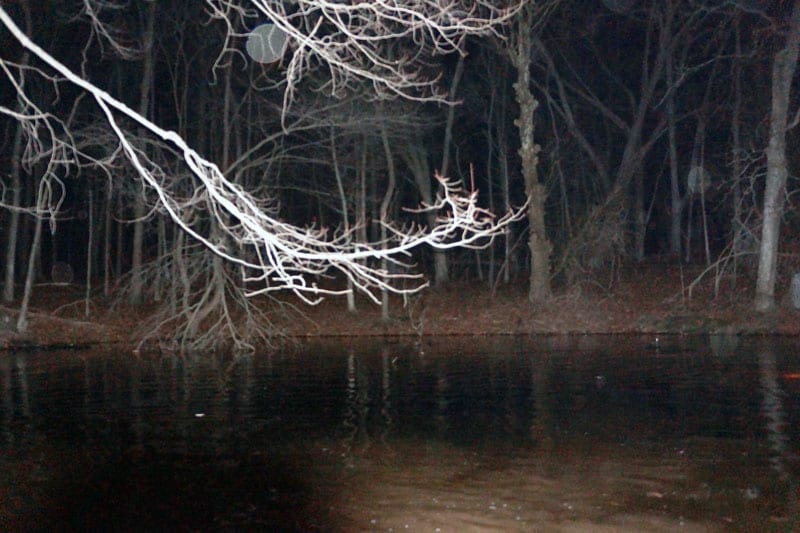 Then descended a hill until we reached the vernal pond. 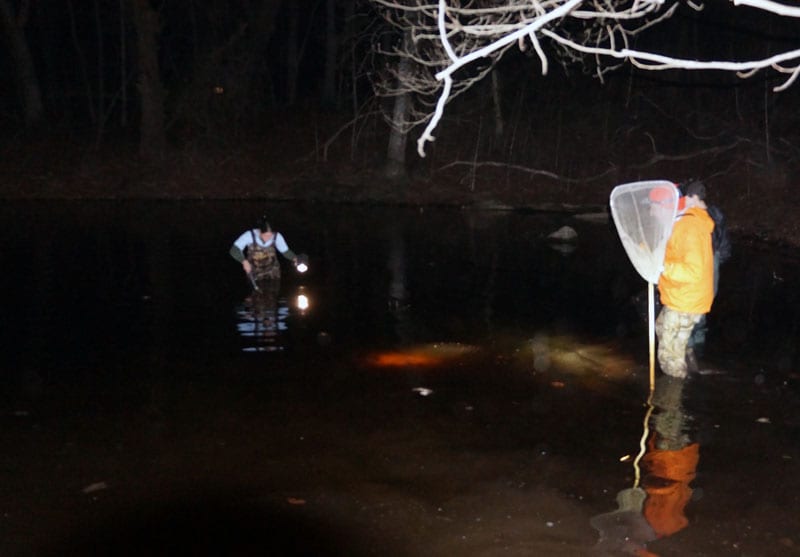 The SOFO guides waded in the water with nets. 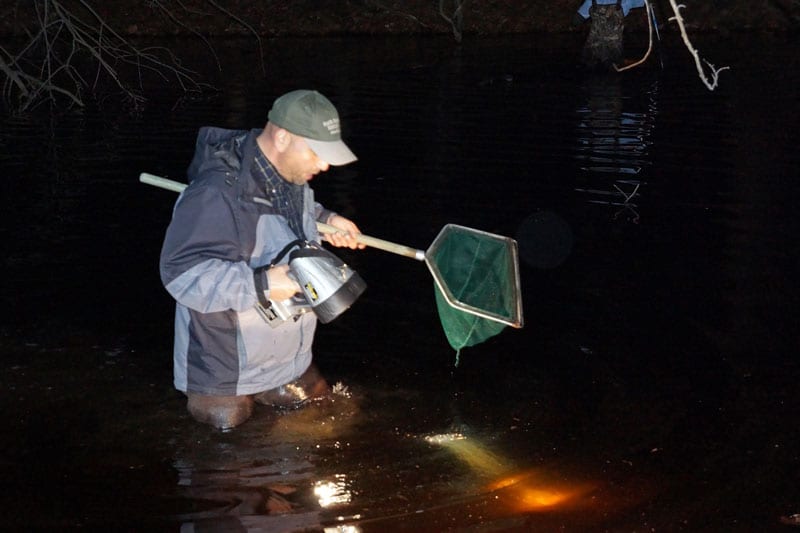 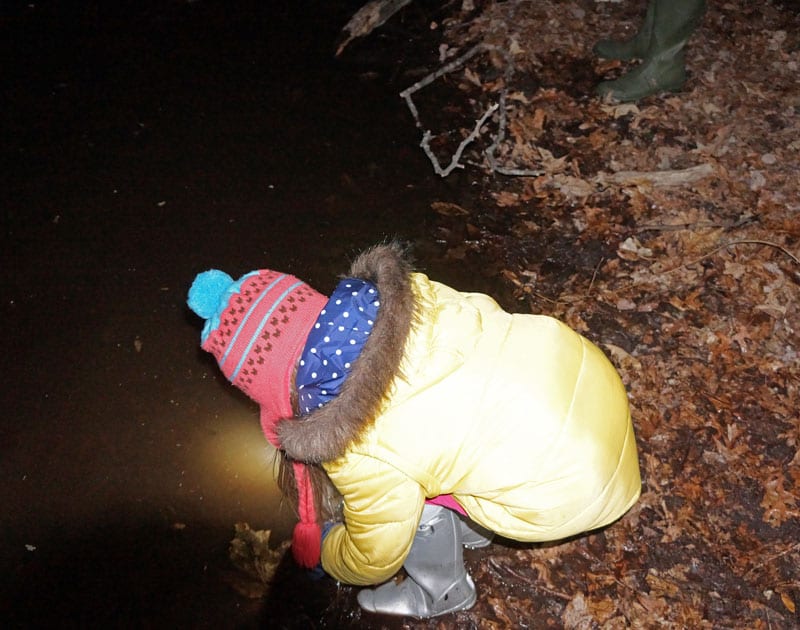 And soon we saw this pool’s night life. 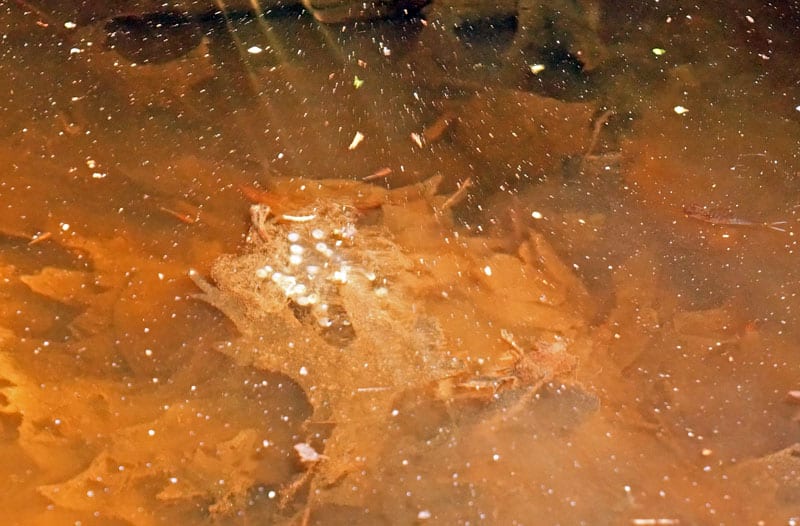 Masses of eggs shone just underneath the water’s surface.  While fairy shrimp swam around them. 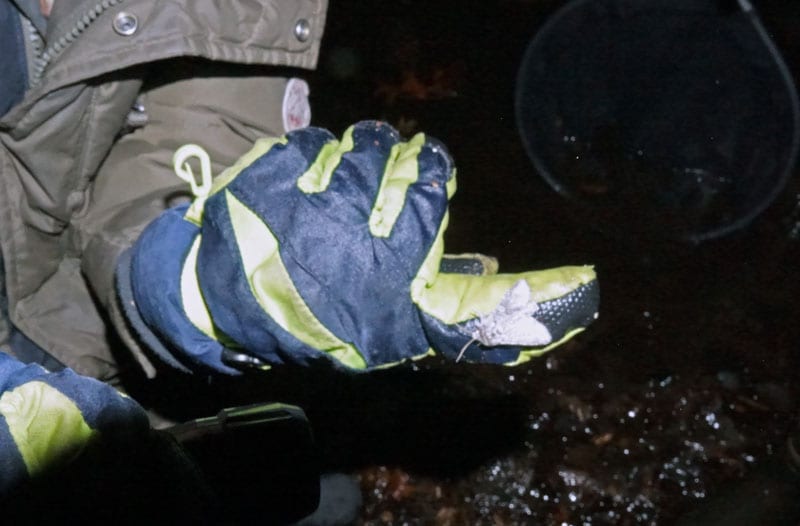 A silver moth flittered near the surface and then landed on my son’s glove. 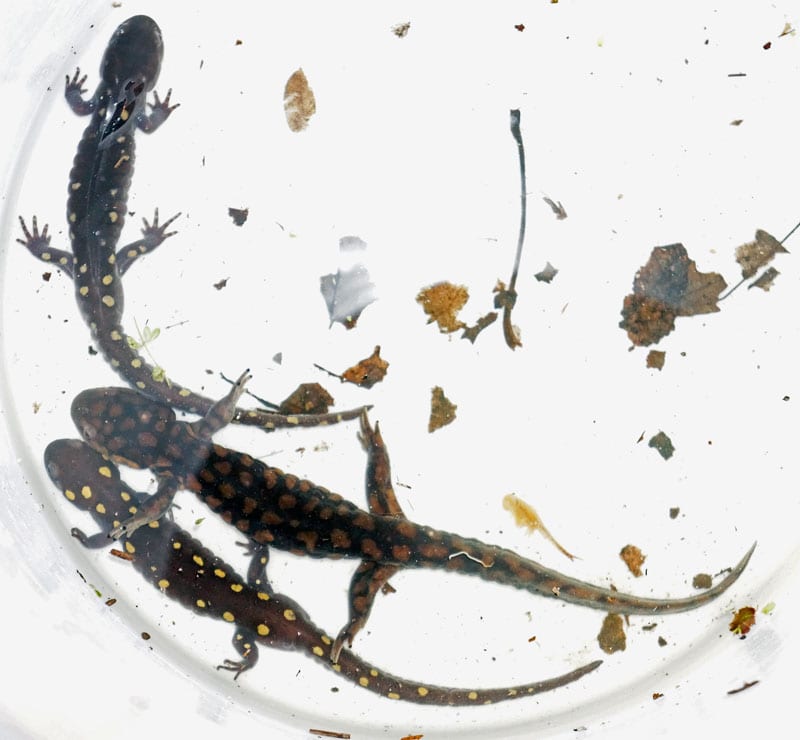 It’s at this time when winter fades that the mole salamanders make their way to vernal ponds to mate and lay their eggs. The night hunt had to be postponed a couple of times because the water was still frozen. 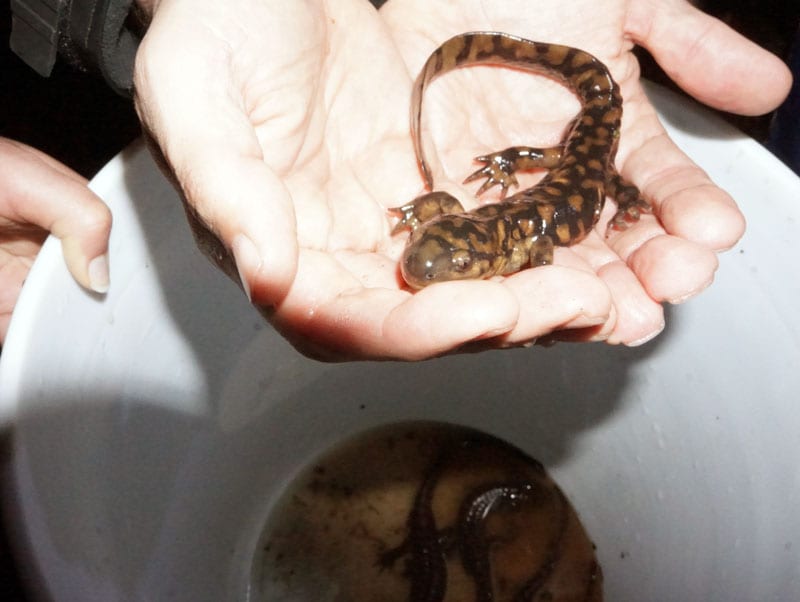 The Eastern Tiger Salamander is on the endangered species list in New York State. But in this area of Long Island they are abundant in protected vernal ponds. The larvae are dependent on the pond for the next few months to survive. And when they do, they live for 12 to 15 years mostly underground. 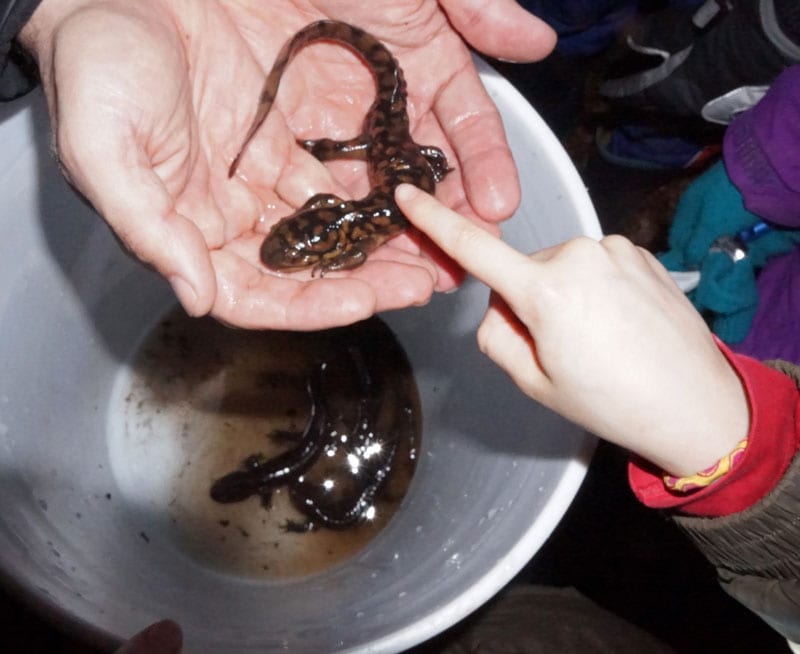 My son gently stroked one as it stared at us with its goggly eyes. 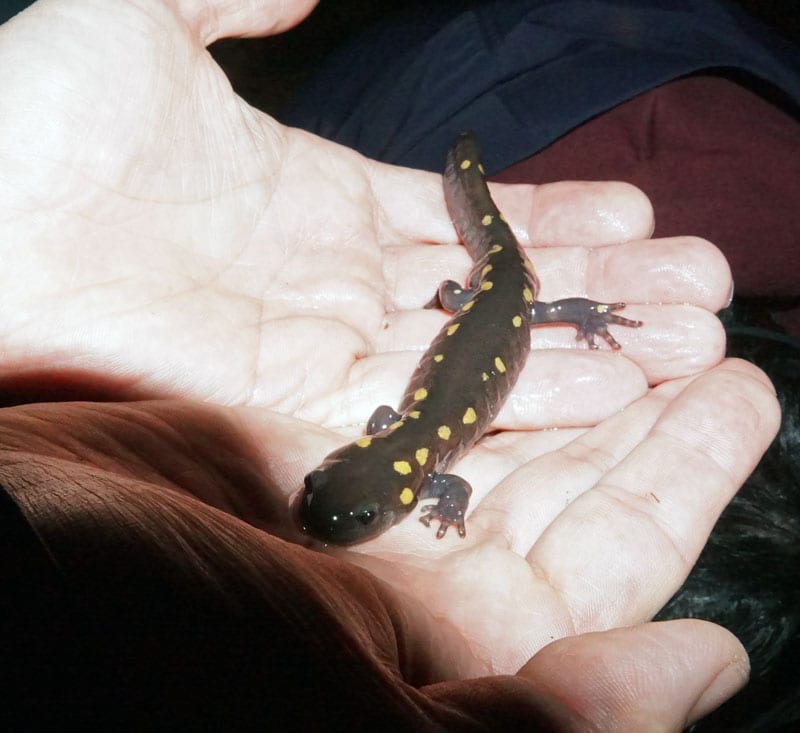 The Spotted Salamander was also here. They’re different species of mole salamanders but both are nocturnal amphibians. They lay hidden during the day under logs or underground in burrows usually made by other animals.

The salamanders were put back in the pond and it was time for us to leave. 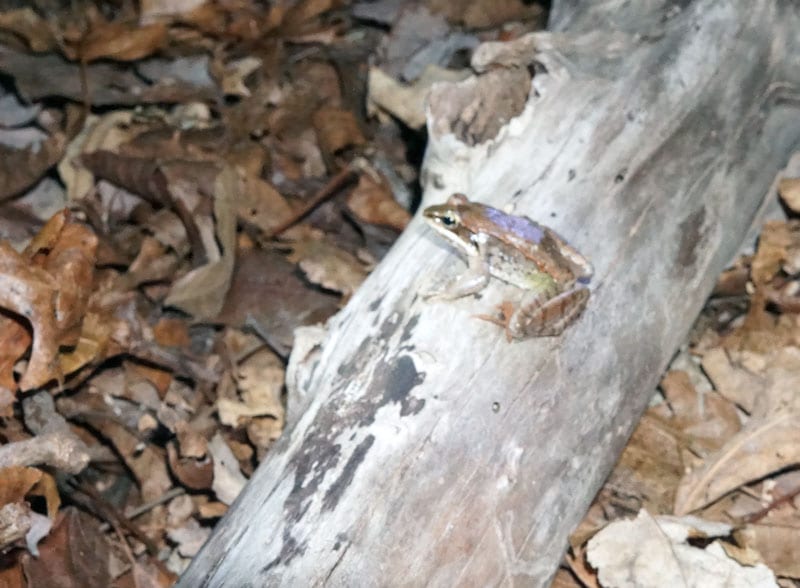 But then we saw a wood frog quietly contemplating the scene. And a pond is truly a vernal pool when a wood frog visits it in the spring.

I brought my children back to the same place in the woods two days later. A quiet pond in the woods during the day.  At night teeming with life. 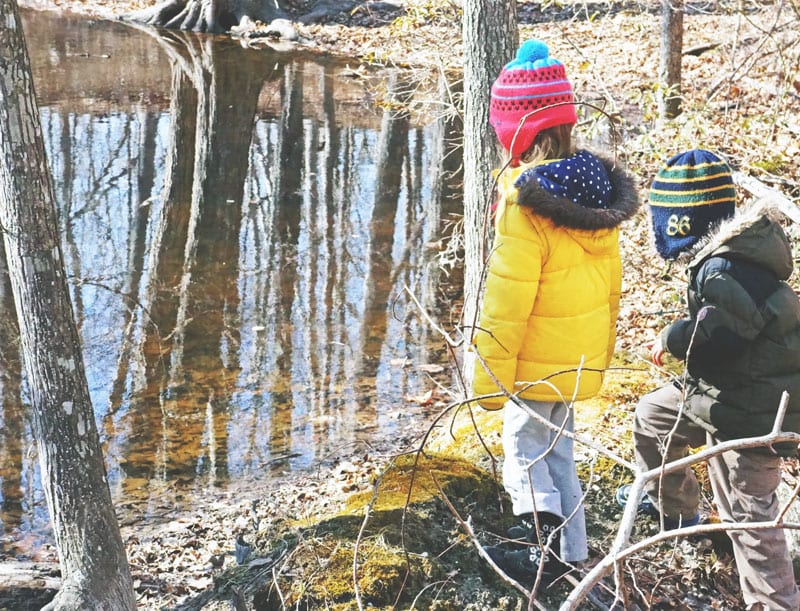 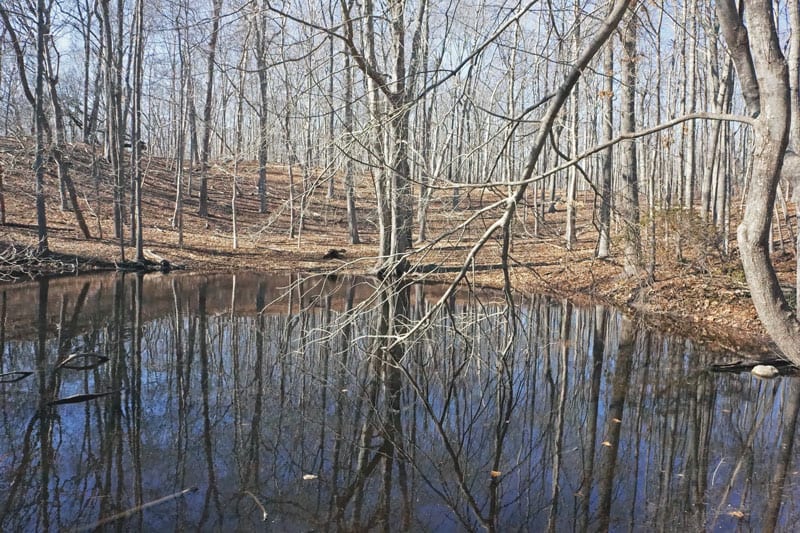 The night salamander hunt was a perfect way for my kids to appreciate the role these vernal ponds play in nature and why it is so important to protect them.

Salamander Hunt in the Hamptons, NY

Every year when the vernal ponds melt, SOFO organizes nighttime events to a vernal pond only after heavy rains (so dates may change). Children can attend a salamander hunt accompanied by an adult. You need to prebook to attend their walks in search of the endangered Eastern Tiger Salamander as well as the Spotted Salamander. Children can also see live mole salamanders in the nature center. The South Fork Natural History Museum and Nature Center is located in the Hamptons, NY between Bridgehampton and Sag Harbor. Check the SOFO website for a list of events.