You are here: Home / Nature Diary / The secret lives of our winter garden birds 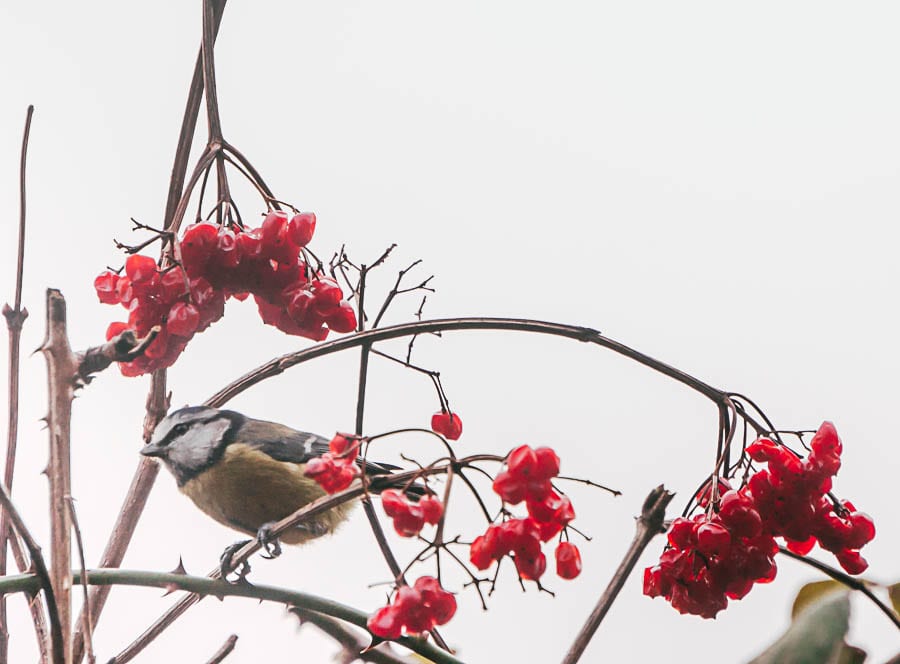 I feel guilty when I run out of bird food in the winter.  The little garden birds pop back and forth to my feeders checking if they have been refilled. I can see them fluttering in and out of the bare branches in the hedgerow waiting. My husband joked that when we moved into our house  I made sure we had bird food before I restocked our larder. He wasn’t far off the truth.

“Birds are about place…A bird is the place it lives in. It eats the place. It makes the sound of the place. The sighting of a bird gives you, the watching human, an instant understanding of the place you find yourself in.” The Meaning of Birds by Simon Barnes.

We live in a West Sussex rural valley surrounded by woods, hedgerows and fields. The nearest public road is about a mile away.  Whenever I’m outside in the garden I’m mesmerised by the sound and sight of birds. Each season some of the songs change and some continue. But today I’m just focusing on our winter garden birds. I took a break these past few months from my blog but I’m planning to keep a regular nature diary this year about our valley. I want to keep a record of the seasons whether wildlife or wild flowers.

If I’m quiet and sit in the garden or watch from my studio office window, I notice the secret lives of our garden birds. It might be beautiful watching them at the feeder but there’s a continuous conflict and hierarchy on who nibbles the fat feasts available. 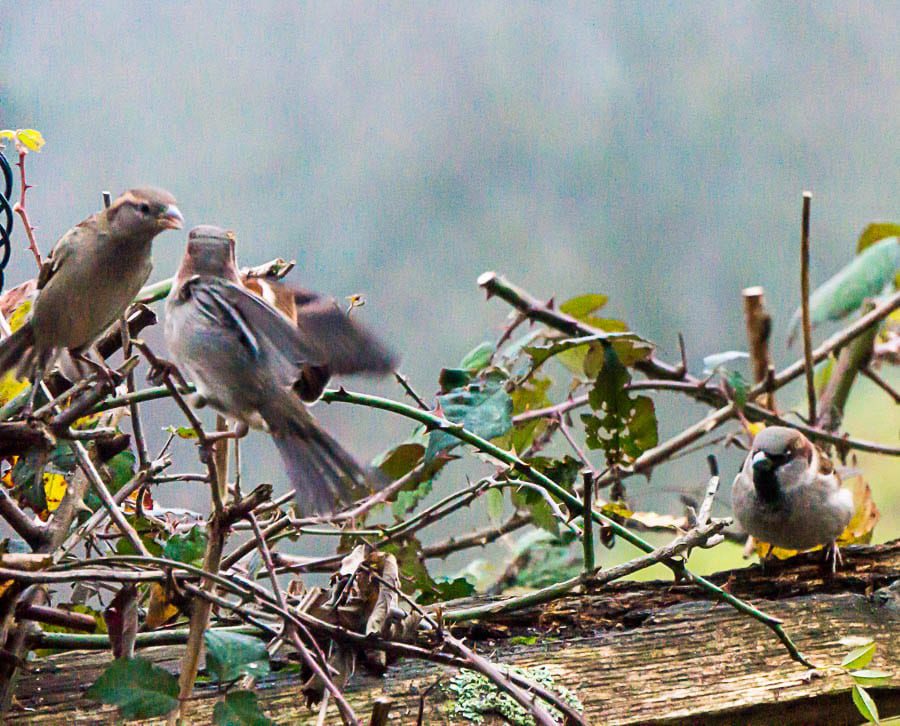 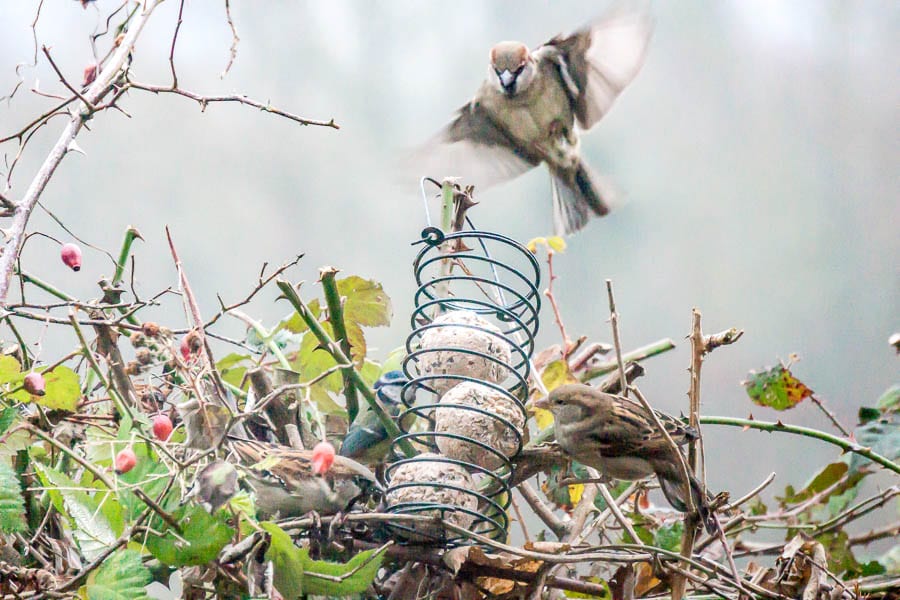 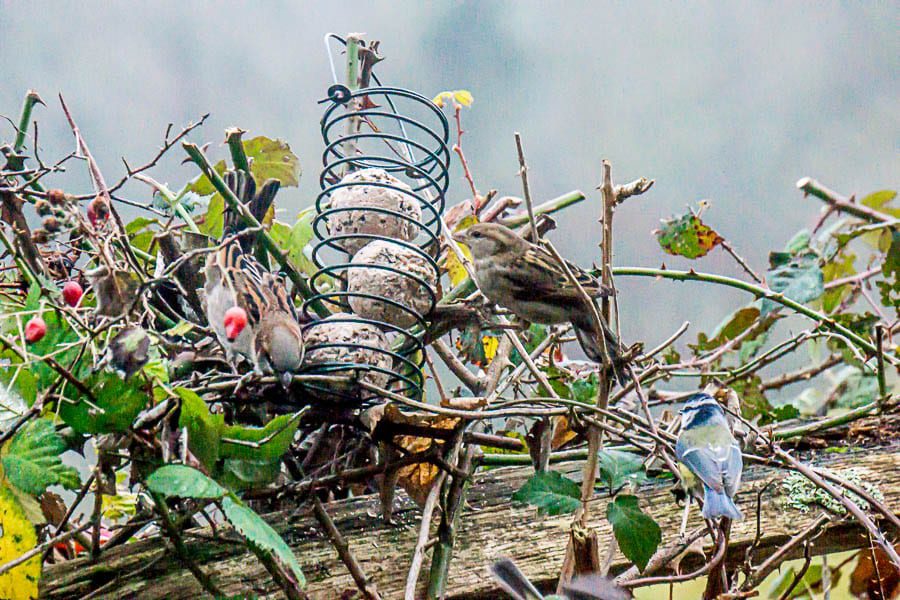 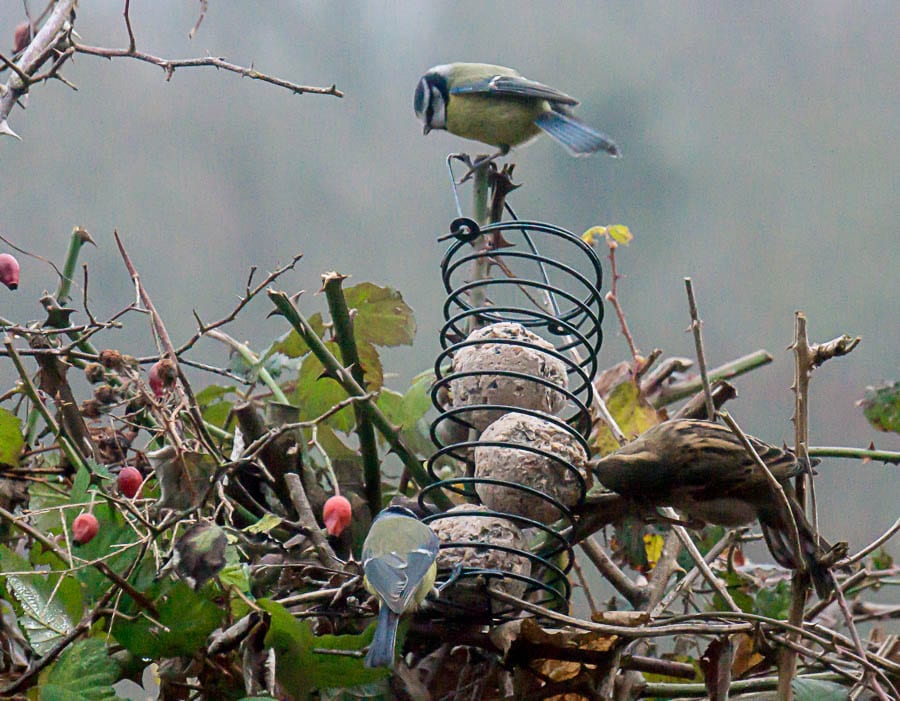 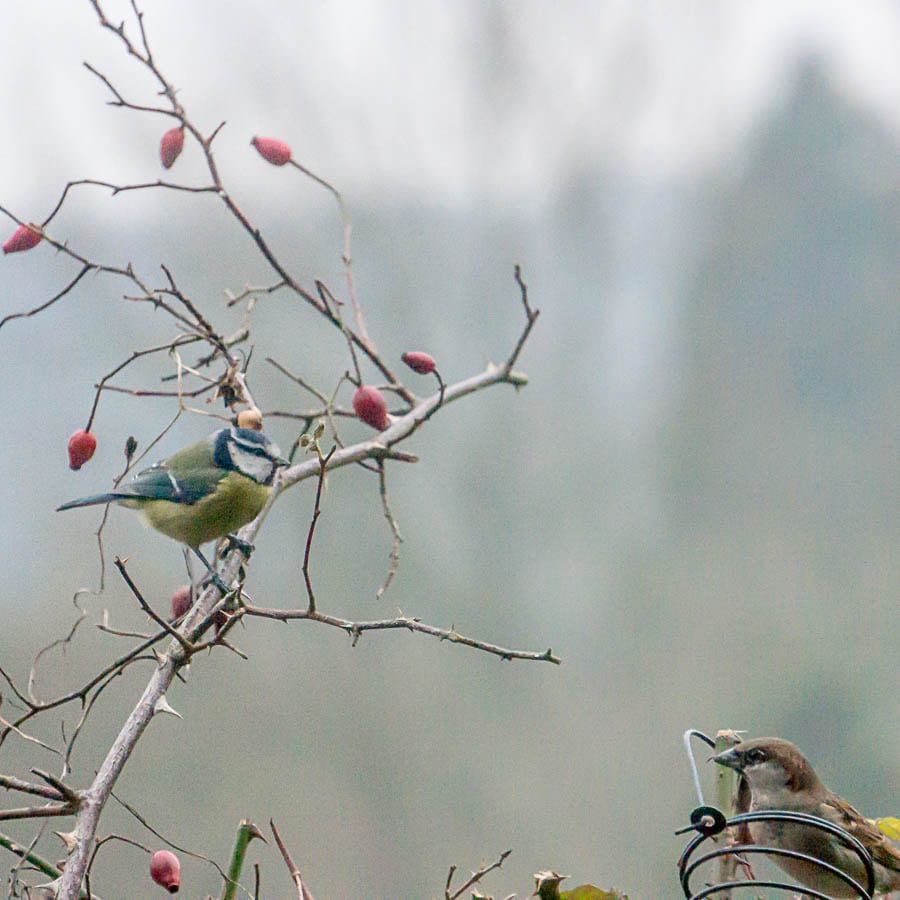 In winter the hedgerow at the bottom of our garden fills with flocks of small garden birds, especially blue tits and great tits. Goldfinch and dunnocks also find shelter within its branches. House sparrows are our other regular callers flying back and forth from a barn next to us.  Tiny flocks of goldcrests dart low across the landscape moving from hedge to hedge and tree to tree then head off to the pine forest nearby. The song thrush and the blackbird seek insects from newly upturned lawn thanks to our moles. 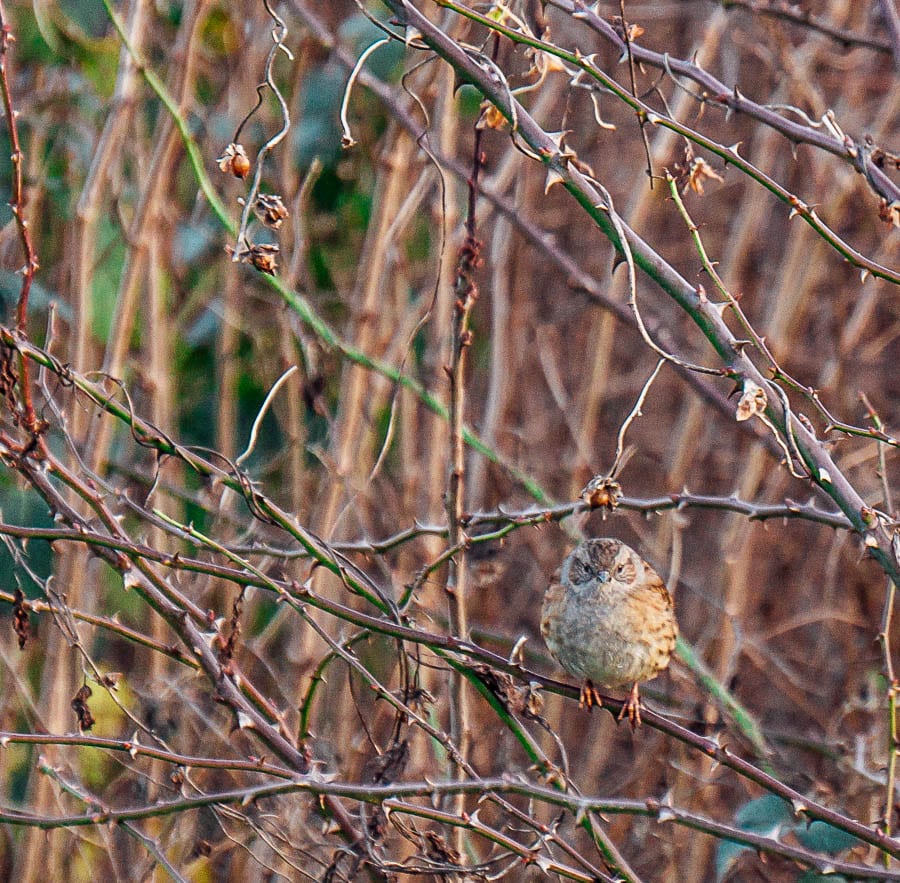 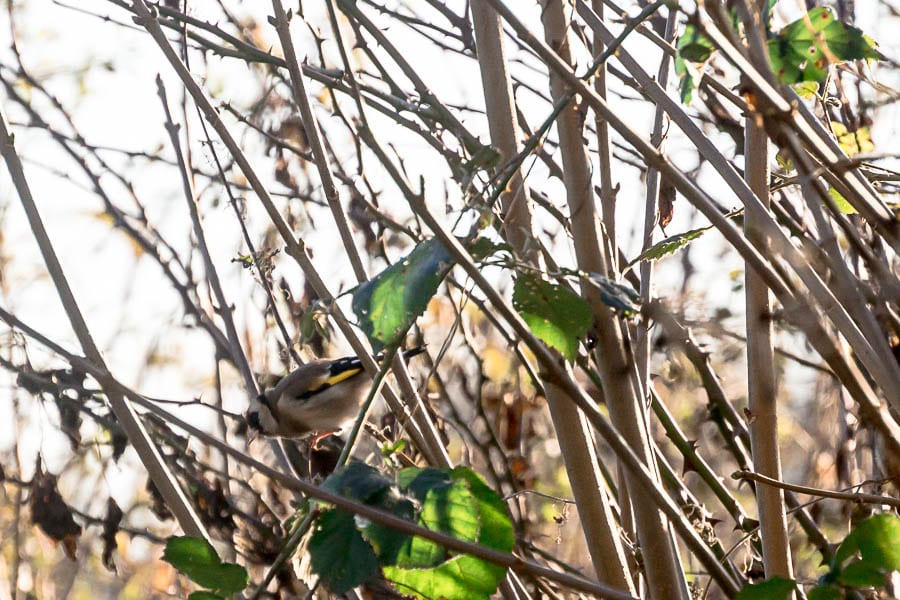 There is always a robin or a blackbird about. They’re both territorial so I remind myself that our garden is also their permanent home. 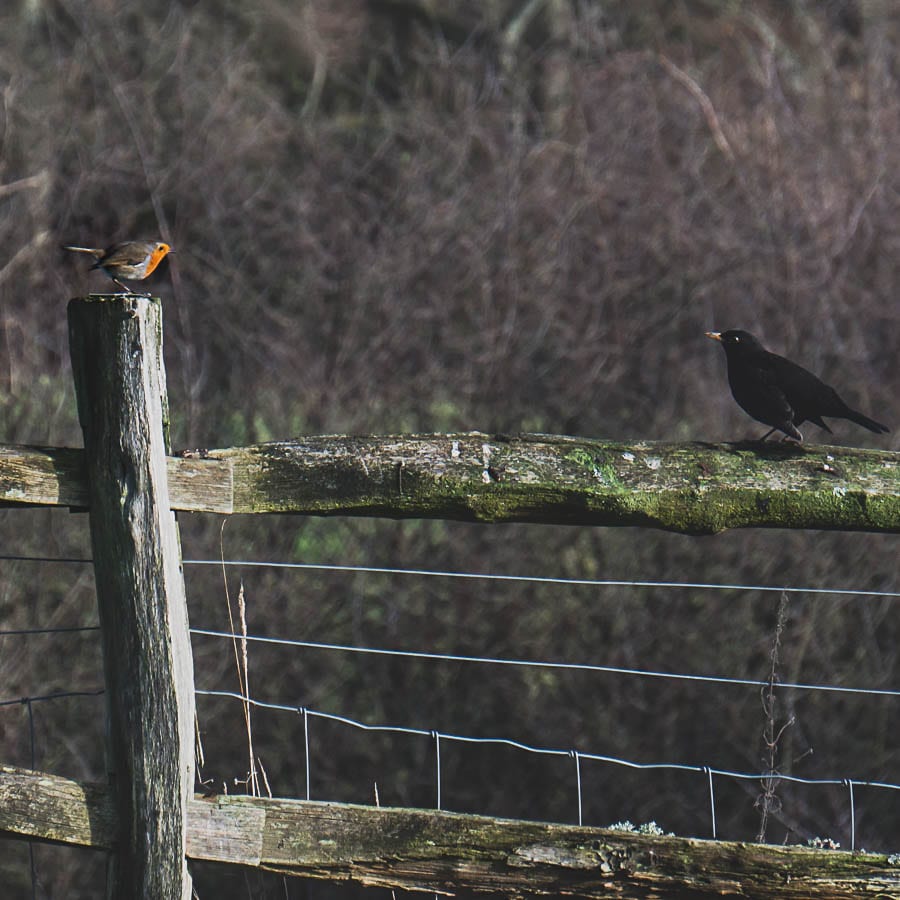 “Use of the name ‘Robin’ is relatively recent, with the British Ornithologist’s Union official list accepting ‘Robin’ only as recently as 1952. Historically the name ‘Ruddoc’ was used by the Anglo-Saxons but by the Middle Ages the name ‘redbreast’ was in use. The ‘Robin’ component was added later (sometime in the 15th or 16th Century) and appears to be an affectionate nickname associating the bird with the legends of Robin Goodfellow and Robin Hood.” British Trust for Ornithology (BTO)

In return they fill our garden with their songs. In the winter the first song I hear at sunrise is that of our robin. Of course, he’s not fearful of coming quite close. 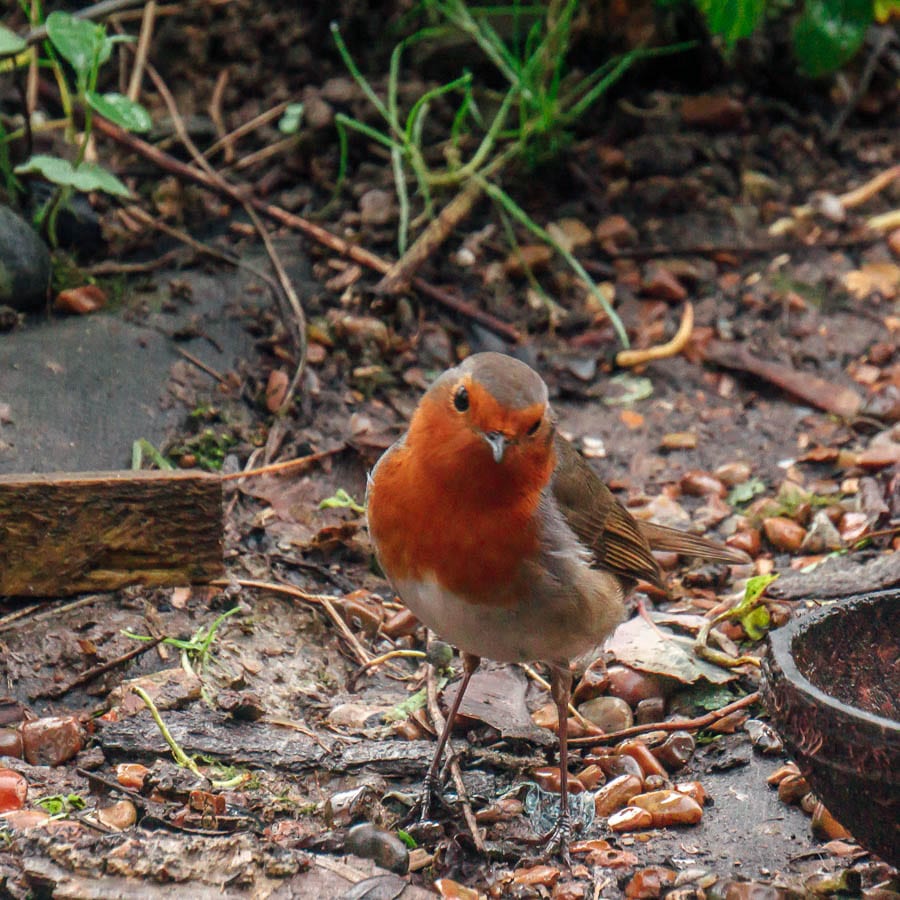 I found out that the blackbird prefers deciduous woods despite adapting to surburban and urban gardens. It needs a song that will be heard in dense woodlands. But I will have to wait until later this month or February before his songs fill the air. Then in July he’ll be quiet again. I know ours is at least a year old as his bill and eye ring is distinctly orange. He probably was born somewhere in our valley as they usually grow up and live near where they were hatched.  I’ve also seen a female brown blackbird hanging out in our garden. Perhaps a girlfriend and mother of his offspring? 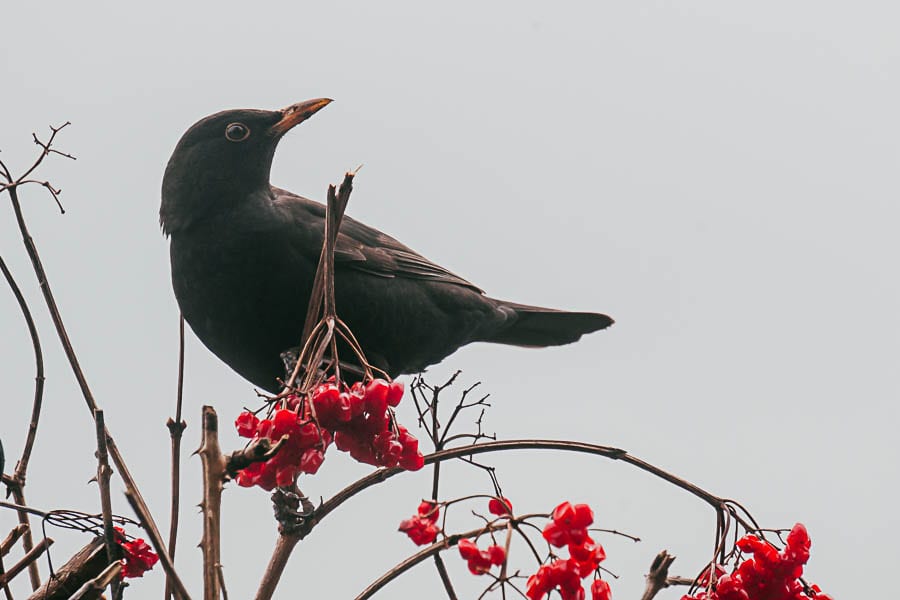 “Tom tit is a shortened version of ‘Tom titmouse’, which is an old English folk name for the common UK garden visitor, the blue tit.” RSPB

In the winter I refill the feeders with fat balls every morning. I also put up a suet bar with mealworms. Tom tits survive just day to day in the winter and spend most of their waking hours foraging for food. Many won’t survive a cold long night in the winter if they don’t have enough energy or fat reserves. From our kitchen window we can observe the blue tits and great tits feasting on the mahonia flowers which bloom in the winter. 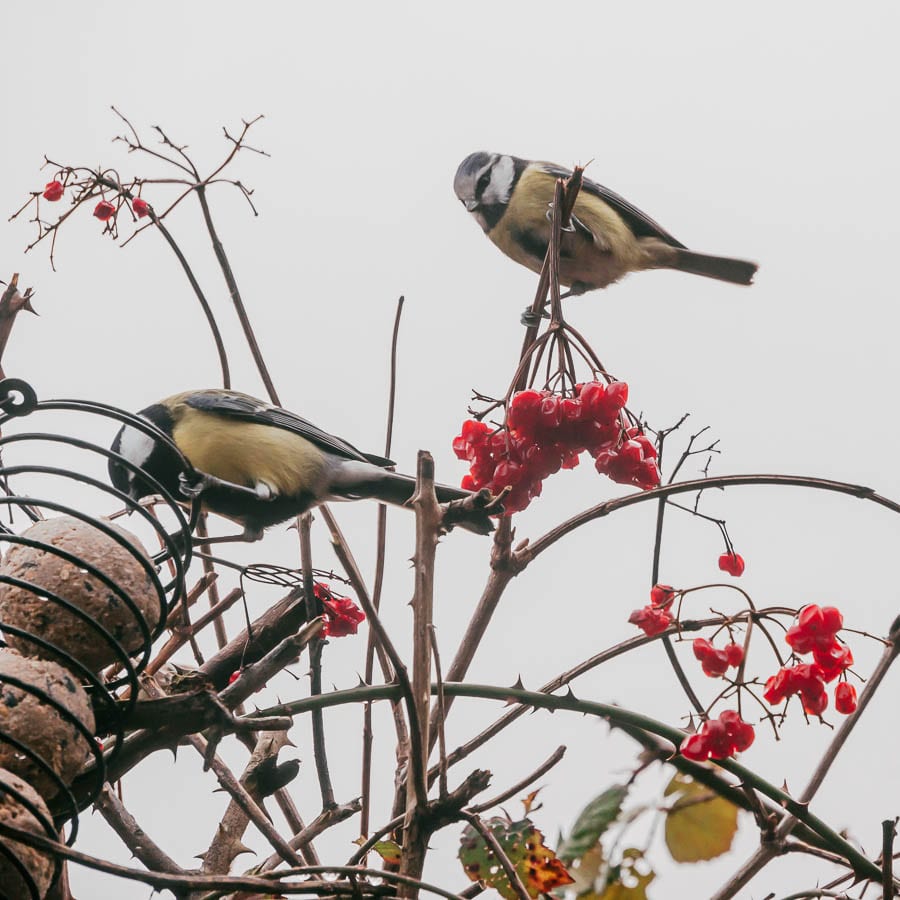 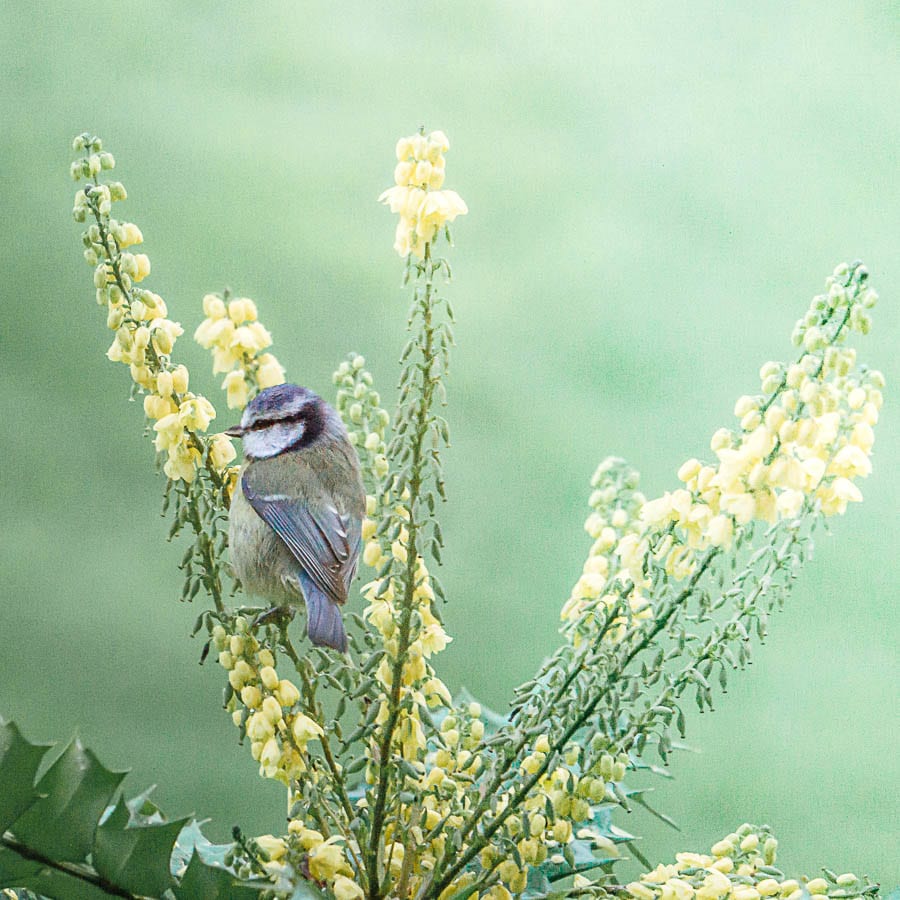 The book I’m currently reading to better understand the secret lives of our garden birds is The Meaning of Birds by Simon Barnes. It’s a fascinating read whether on the meaning of their songs, how they define a place, the drama of raptors, their role in Charles Darwin’s work or our relationship with the different avian species. It’s a celebration of birds written beautifully by one of our top nature writers.

I don’t just want to learn how to identify different birds but am seeking a better understanding of them and their behaviours. The little things sometimes helps me to get to know them better.  Such as birds see colour differently – in four dimensions.

“Male and female blue tits look the same to us, but they’re glaringly different to a blue tit. That’s because the ultraviolet light reflected from the crest, which can be experienced by a tetrachromatic bird but not by a trichromatic human….But even in the muted form that birds’ colours come to us we find something glorious, something that daily lifts our hearts.” Simon Barnes, The Meaning of Birds. 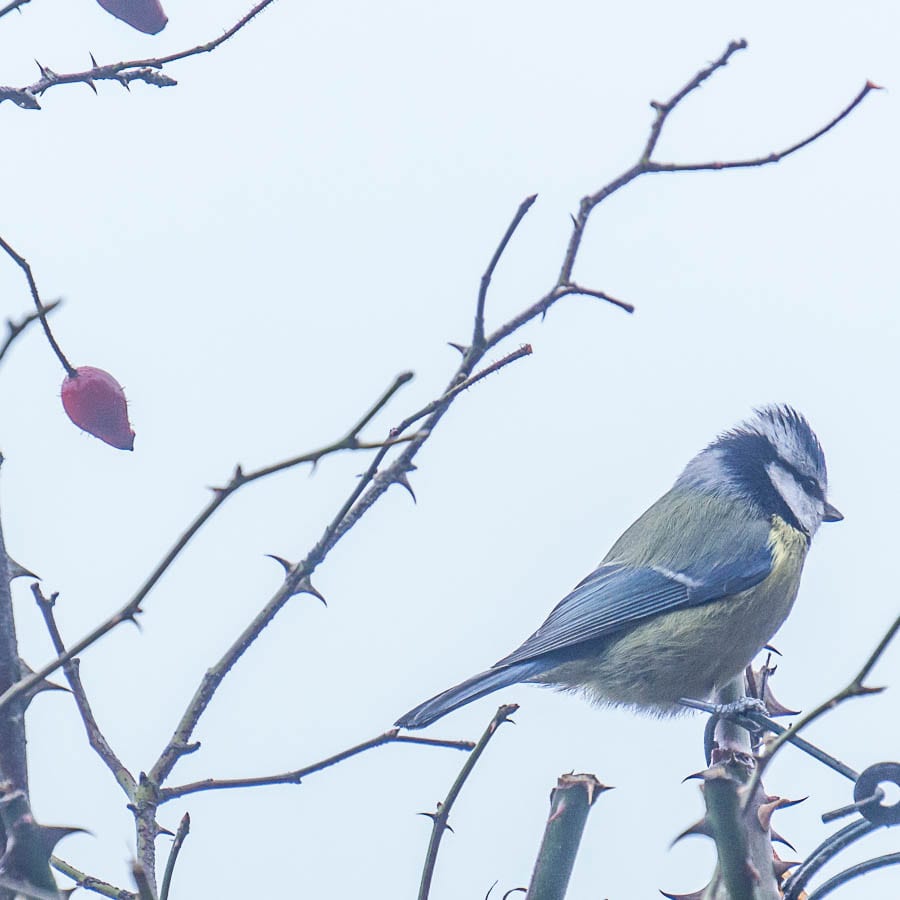 There also other birds in our valley in the winter. Pheasants, jackdaws, pigeons, raptors, swans in the lake in the woods and recently a visiting flock of starlings all survive the cold weather and fill the sky around me with their calls and songs. But that’s another post. In the meanwhile I’m making sure that the little birds will have water and a meal during the cold winter and early spring days.