You are here: Home / Travel diary / The Big Duck 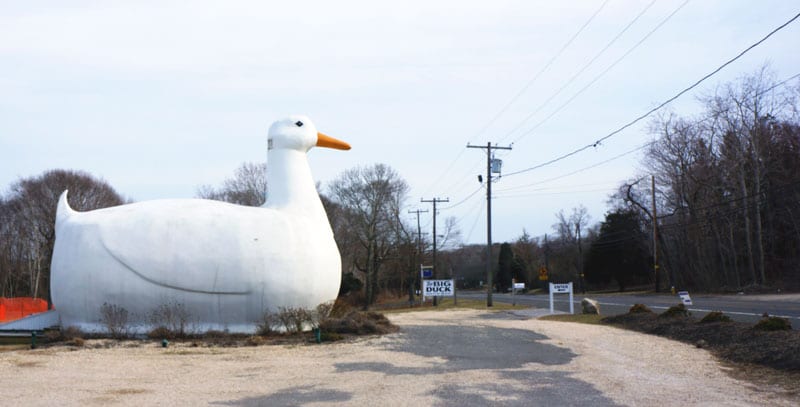 A 10-ton, 20 feet high and 30 feet long duck sits beside the road watching traffic going by.  Cars keep stopping to have a look at The Big Duck.

It was the 1930s when cars first pulled over to gape at the giant fowl. And here I am visiting the same quirky place with my kids  – and it’s the 21st century. 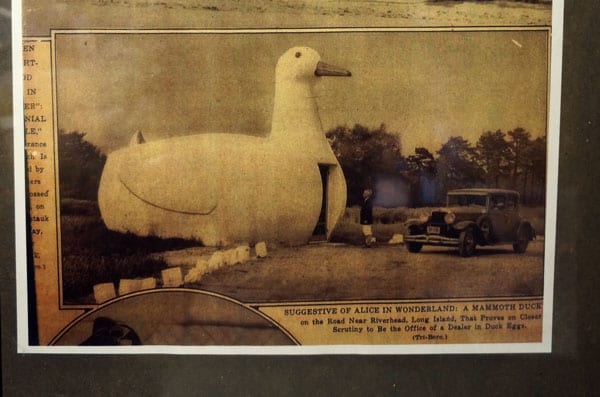 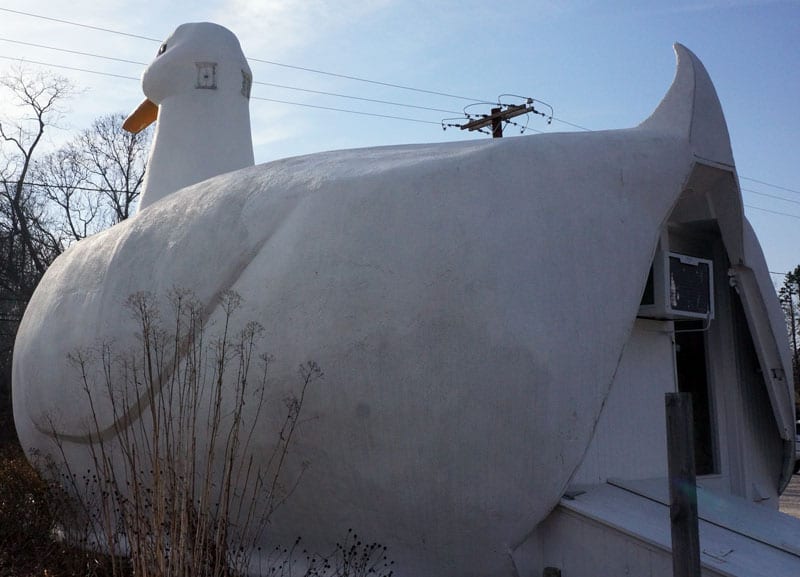 In 1931 a duck farmer called Martin Maurer hired a carpenter and two stage show set designers to build The Big Duck. It was the time of the Great Depression and Maurer and his wife decided a giant duck-shaped poultry shop would help their family business.  Wood, wire mesh and concrete were used in the construction.

It’s a classic example of roadside architecture.  Across the USA, buildings that looked like donuts or hot dogs or tea pots began appearing to draw customers in. No signs were needed as the novelty structures themselves were literal advertising.

The critic Peter Blake rebuked the duck and others like her in his book God’s Own Junkyard, a polemic about the deterioration of the American landscape. Then Robert Venturi, one of the most influential and prominent architects in the US, described architecture as either being a “duck” – when a building is itself a symbol – or a “decorated shed.” Venturi chose the word “duck” because he viewed The Big Duck – or as he called it The Long Island Duckling – as an example of a building-becoming-sculpture.  (Venturi and his peers Denise Scott Brown and Steven Izenour explained these theories in their book Learning from Las Vegas. Venturi’s designs have included libraries, university buildings, the Seattle Museum of Art, and the Sainsbury Wing of the National Gallery in London.)

Architects now write and debate over whether pyramids and lofty cathedrals are “ducks” or not. Las Vegas itself is now viewed as filled with “ducks.” An academic theory and architectural term used by Venturi and others directly inspired by this very building shaped like a duck in Long Island.

The Big Duck on the move 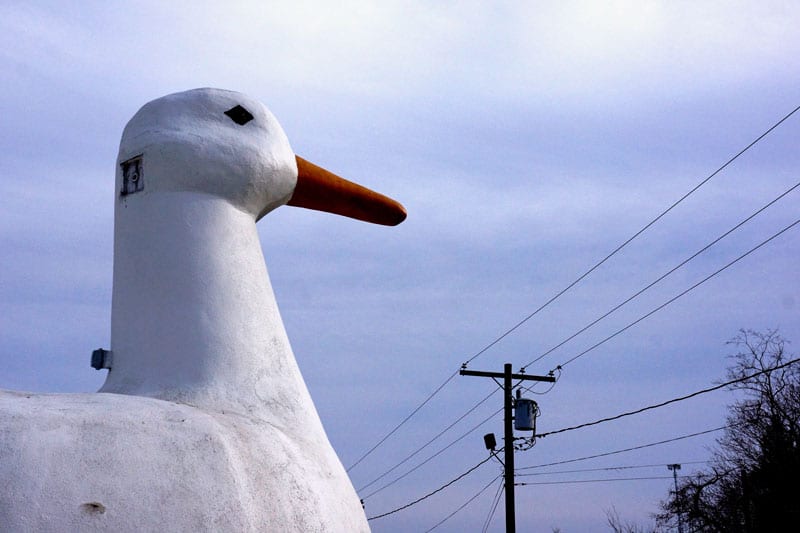 In 1937 Maurer moved The Big Duck from Riverhead to its present site in Flanders in order to attract motorists from New York City by locating it on a route known as the “gateway to the Hamptons.”

51 years later the concrete fowl with its Ford Model T tail lights as eyes was moved to parkland near Hampton Bays because of plans to develop the land it roosted on. Then almost 20 years later, in 2007, it came back to its 1937 nest in Flanders, although the original eyes were stored in historical archives.

What do Donald Duck and The Big Duck have in common?

The Big Duck is based on the ‘Pekin Duck’ first introduced from China to Long Island in 1873. Supposedly nine out of 25 ordered from Beijing survived the journey to New York State. I told my kids that Donald Duck was an American Pekin Duck too. 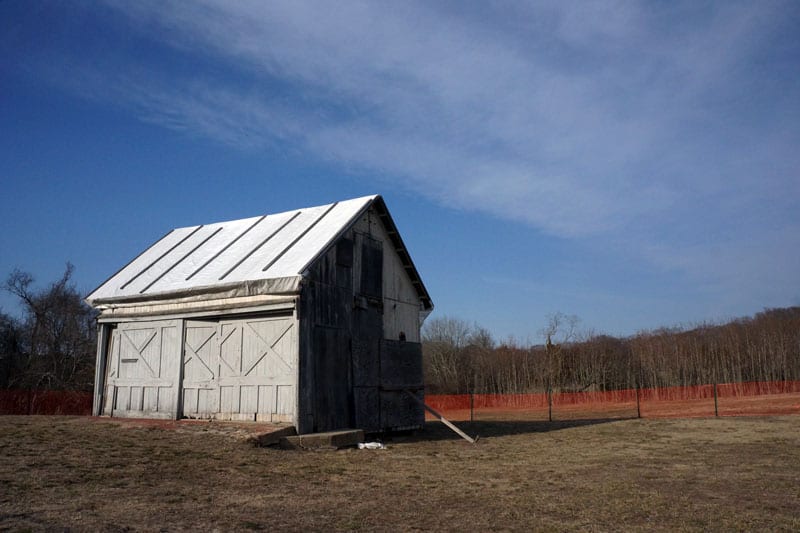 Now plans are in progress for a museum in the barn next to it about the duck industry in Long Island. Back in the mid-twentieth century duck ranch farming was one of the main Long Island industries. Hence Long Island’s baseball team are called the Long Island Ducks. 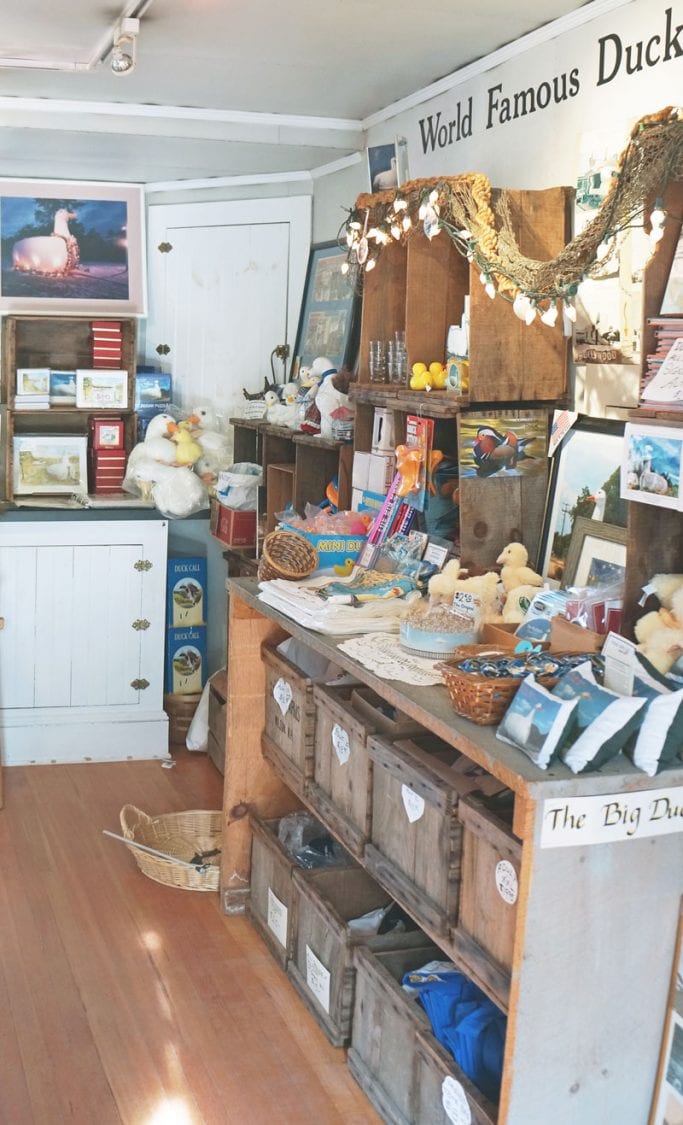 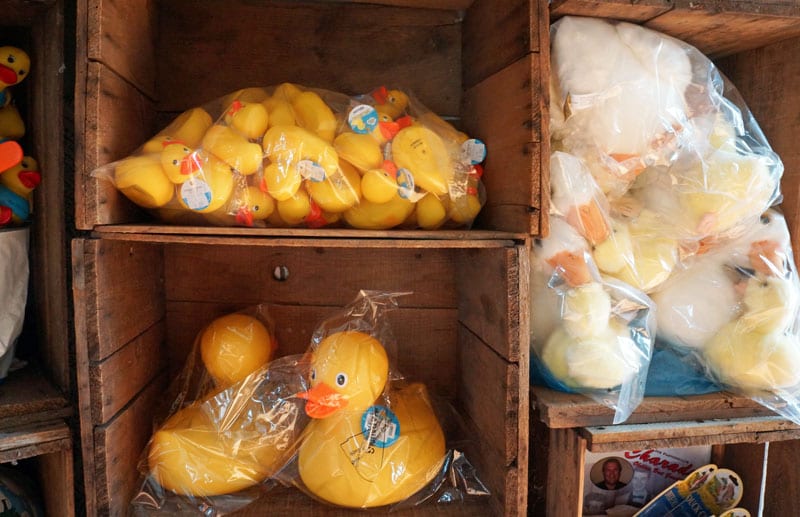 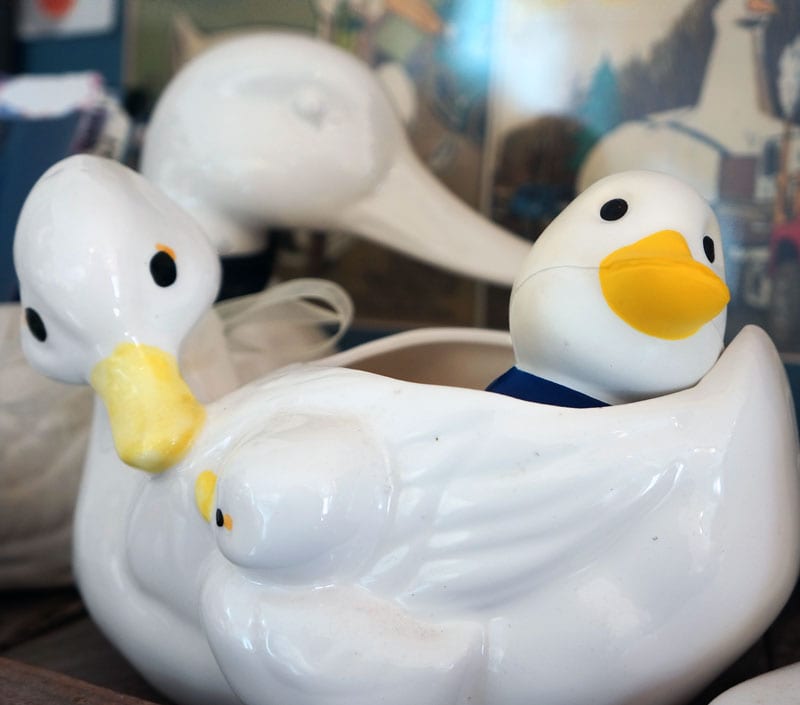 There’s still a small shop inside. Now you can choose all sorts of Duck-a-Bilia. Plus it’s a tourist information center.  Two kids and a gift shop filled with ducks meant I couldn’t leave empty handed.  I skipped the Long Island souvenirs and chose a kid’s umbrella shaped like a duck’s head with beak and a children’s book called Duckhampton featuring The Big Duck. Somehow I thought this picture book would be more understandable to my kids than Venturi’s or Blake’s books. 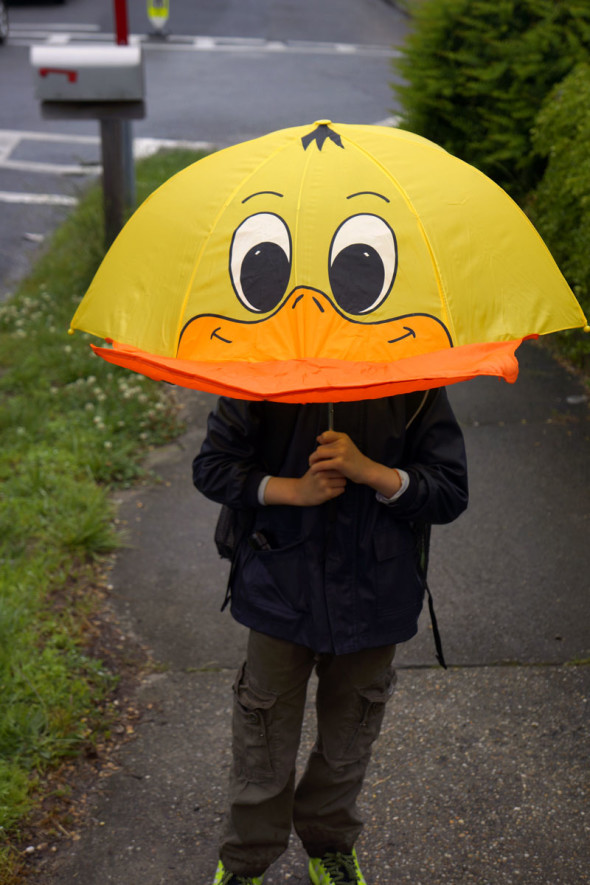 Duckhampton written by Christian McLean and illustrated by Amelia Haviland tells the story of a family of ducks who live in Central Park in New York City but are off to spend the summer in Duckhampton.  They will be joining other duck families such as the Rockefeathers and the Vanderbills.

Obviously a tongue-in-cheek allusion to the old wealthy families in New York City who built huge summer mansions in the Hamptons.  The smallest duck Robert gets lost en route and is helped out by a goose and a pigeon to find his family. These two friends are considered riff raff by his parents and are arrested as kidnappers. Of course, all ends well.

What makes this book particularly special is the illustrations. My children were delightedly pointing out frogs in hot air balloons, owls playing cards and ducks eating ice cream cones. But best of all were the scenes with The Big Duck!

The Big Duck, listed on the National Register of Historic Places, is now owned by Southampton Town. Once upon a time supermodel Christie Brinkley could be heard on the radio promoting it as a tourist stop. Of course, no ducks are sold here and the duck ranch it’s parked on no longer has any fowl. Now it’s just your kids who will undoubtedly make a chorus of quack quack sounds when you encounter The Big Duck. At least mine did. 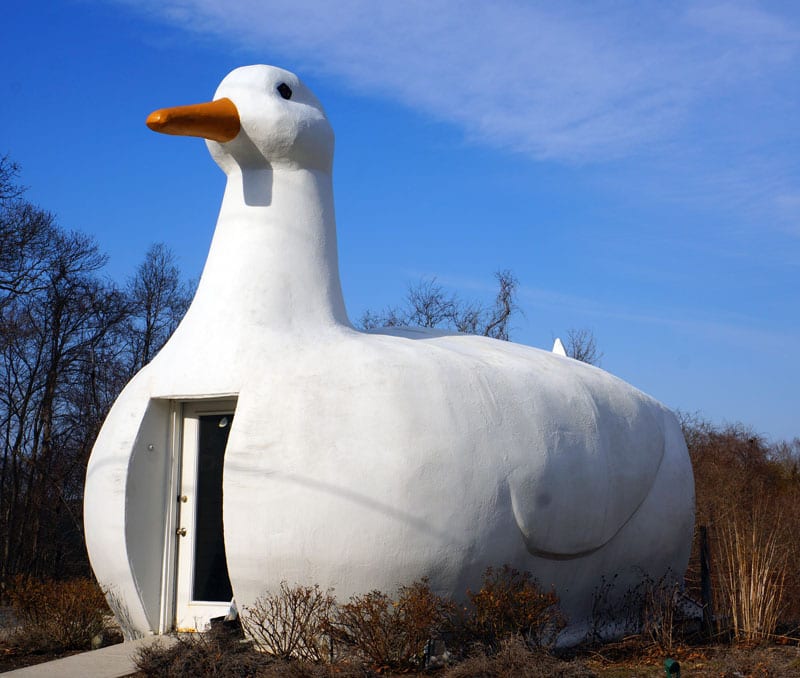 According to a 2021 article by the Easthampton star, The Big Duck is now the gift shop of the Long Island Duck Farming Exhibit and Museum.