You are here: Home / Nature Diary / Wild Foxgloves in the Woods 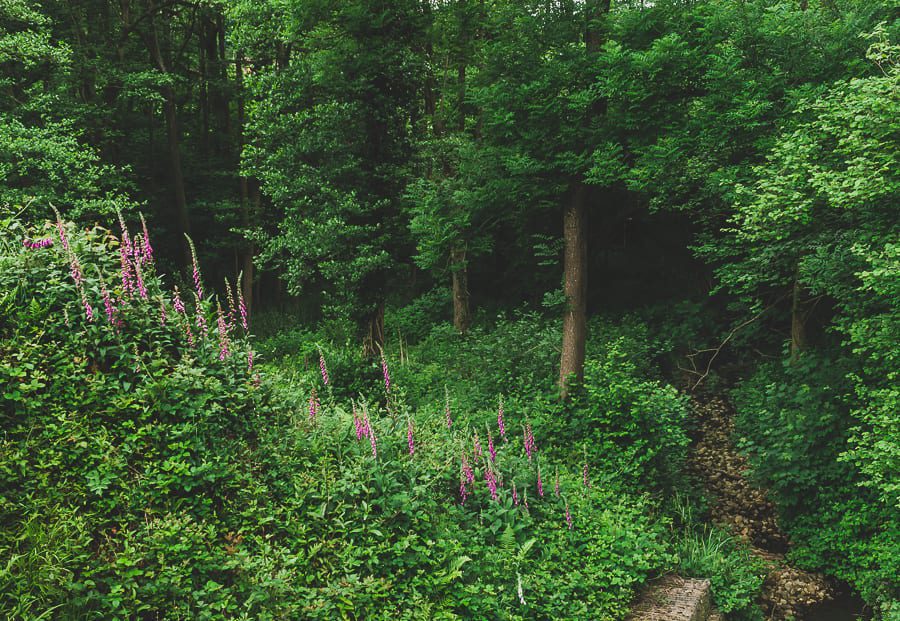 Since the start of June I’ve noticed in passing foxgloves waving their fairy fingers or witch’s gloves – some of their other common names – by the sides of roads, cottage front gardens or along banks across the Sussex countryside. But it was a wild orchid which lured me off a woodlands path into their midst. 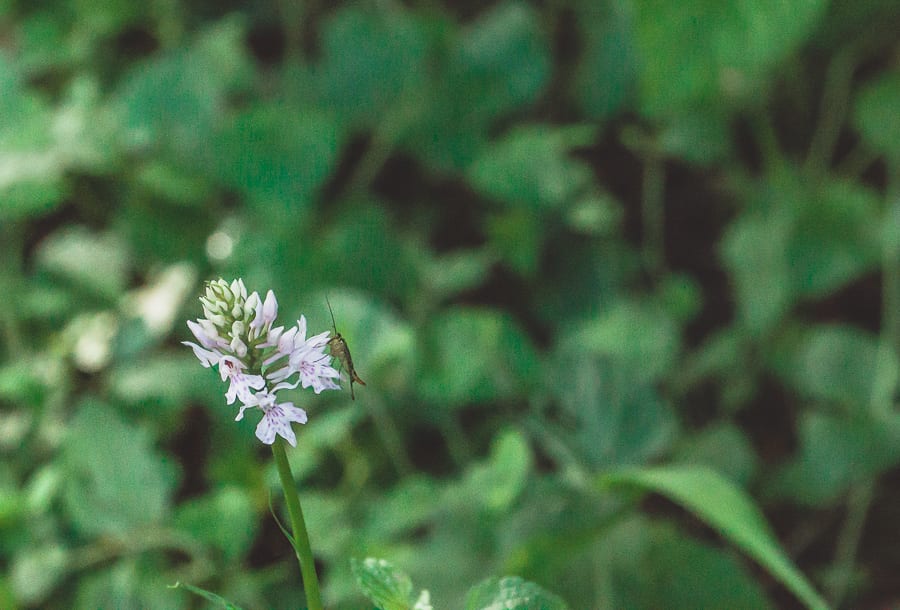 Foxgloves had filled an area in the woods where trees had been felled and cleared last year. Dead men’s bells or bloody fingers or lady’s thimbles grew tall in the dappled light of this clearing. 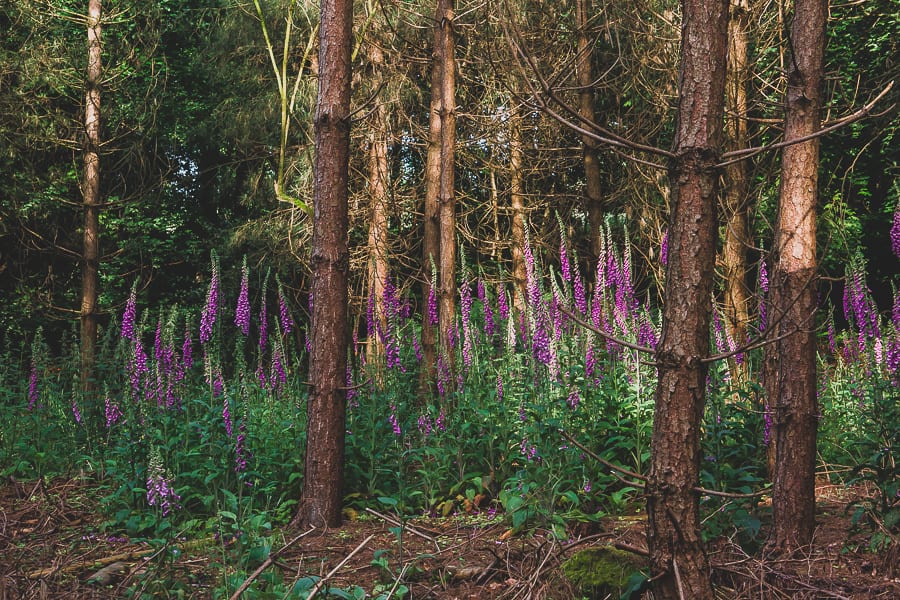 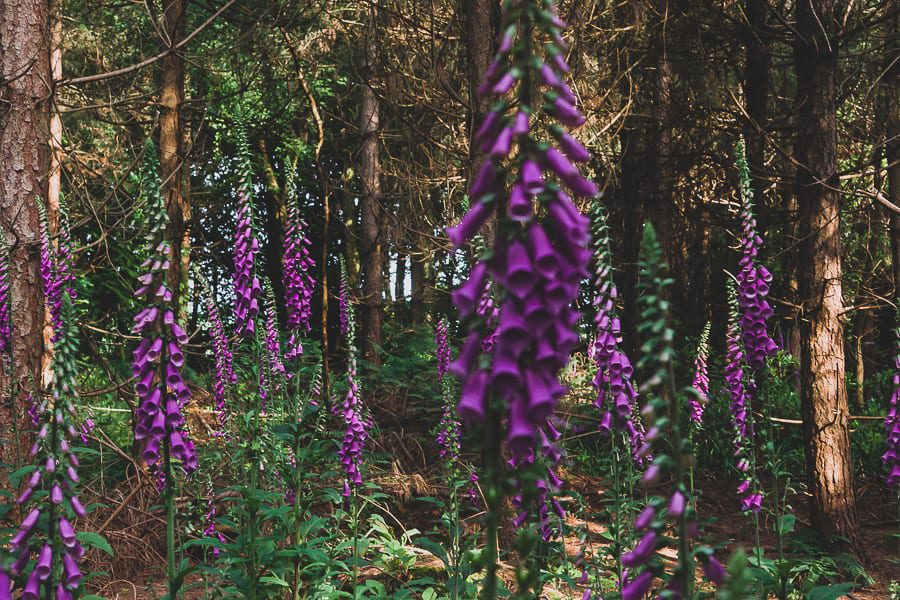 On gossamer nights when the moon is low,

And stars in the mist are hiding,

Over the hills where the foxgloves grow

You may see the fairies riding. 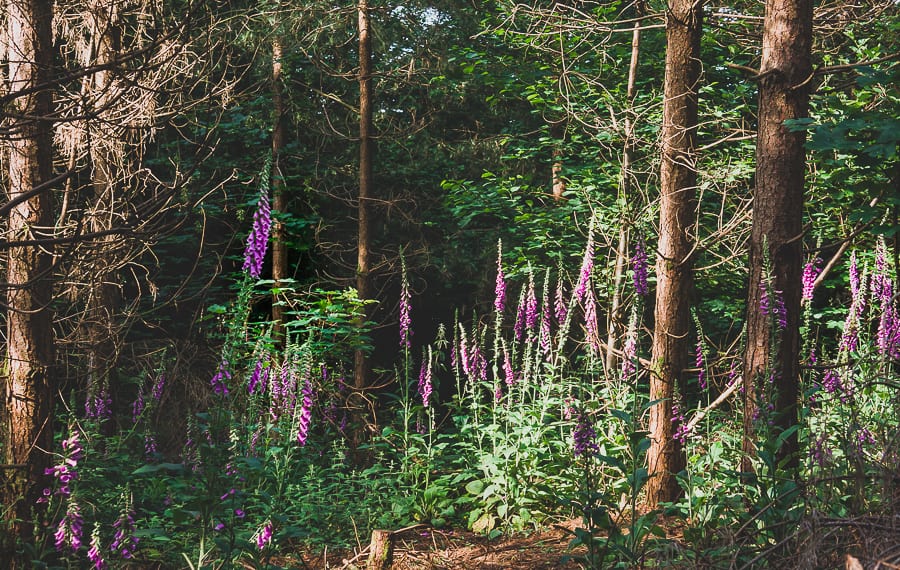 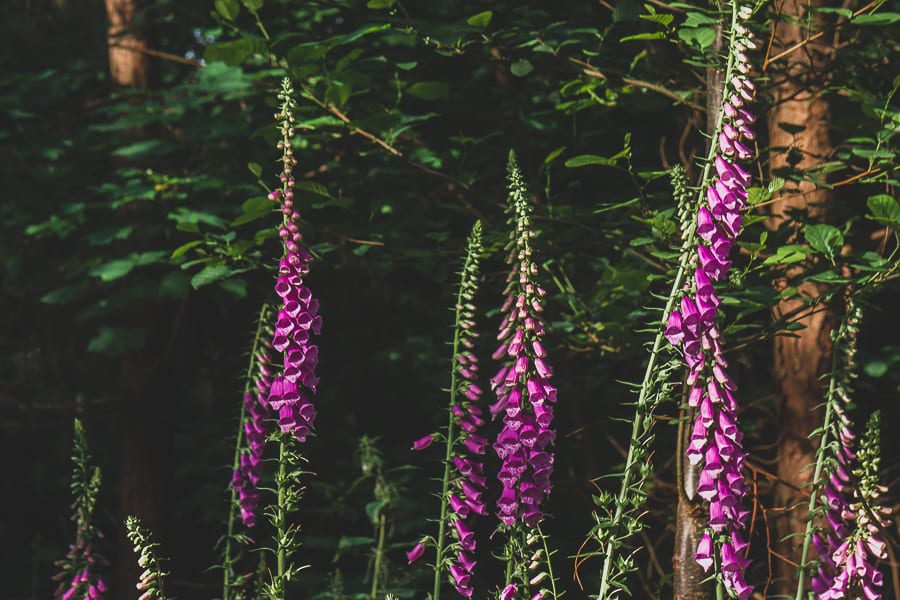 The  bell shaped flowers of the dragon’s mouth or the fairy’s petticoat may sway sweetly in the breeze but their petals, stems, roots and seeds are all toxic. Yet foxgloves – Digitalis purpurea – are friends of the bumblebee and their toxin has medical value.

In the year 1775 my opinion was asked concerning a family receipt for the cure of the dropsy. I was told that it had long been kept a secret by an old woman in Shropshire, who had sometimes made cures after the more regular practitioners had failed. I was informed also, that the effects produced were violent vomiting and purging; for the diuretic effects seemed to have been overlooked. This medicine was composed of twenty or more different herbs; but it was not very difficult for one conversant in these subjects, to perceive, that the active herb could be no other than the Foxglove.” From An Account of Foxglove and some of its Medical Uses published 1785 by William Withering, the discoverer of digitalis.

Foxgloves are a source of digitoxin, a glycoside used in the drug digitalis, which has been used as a heart stimulant since 1785.” Kew

The US Department of Agriculture lists foxgloves as an invasive weed. 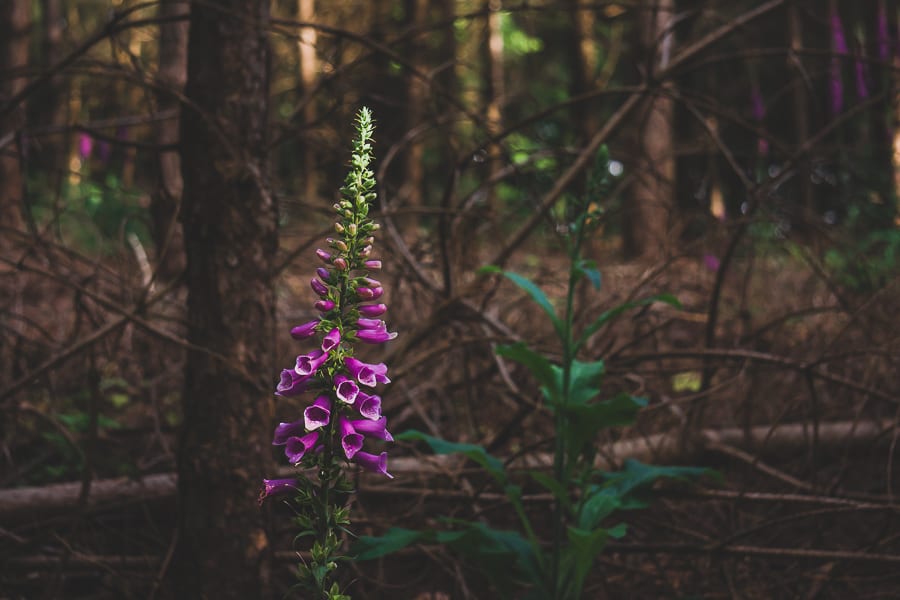 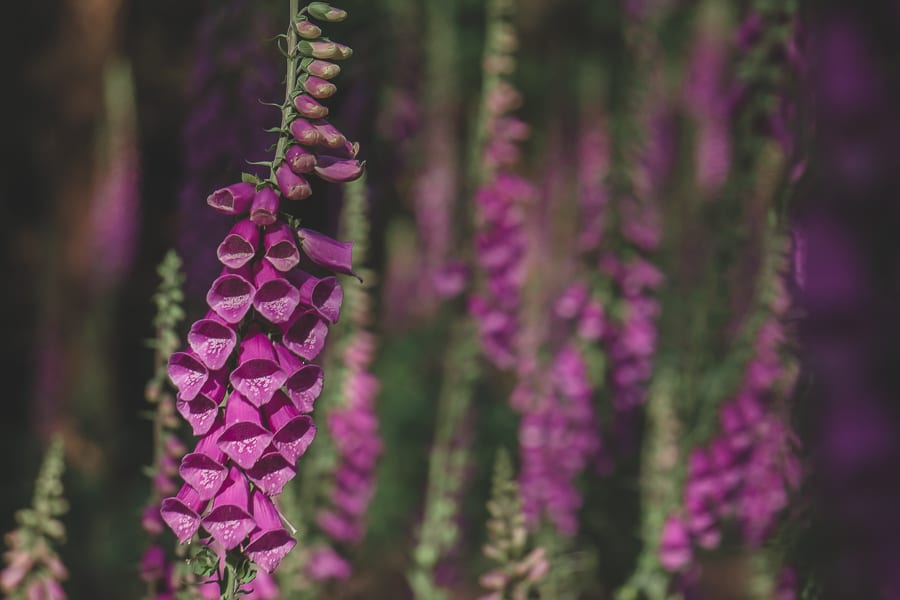 I’ve had the saddest dream that ever troubled

The heart of living creature. – My poor Babe

Was crying, as I thought, crying for bread

When I had none to give him; whereupon,

I put a slip of foxglove in his hand,

Which pleased him so, that he was hushed at once:

When, into one of those same spotted bells

A bee came darting, which the Child with joy

Imprisoned there, and held it to his ear,

And suddenly grew black, as he would die.”

From The Borderers (1795-7) by William Wordsworth 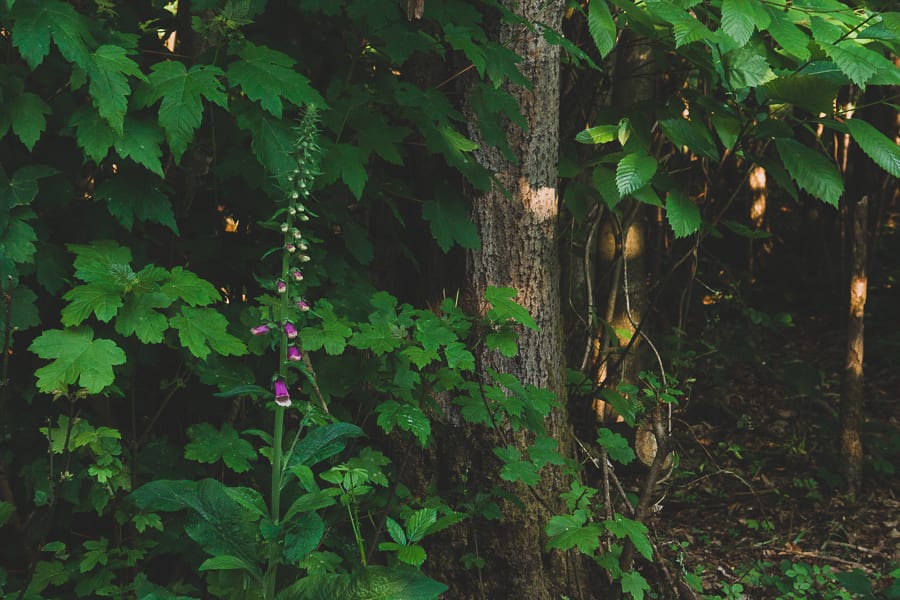 The next time I pass a lone fairy bell or a bloody bells in the woods, I know that more could be gathered together pass the darkness. I just need to find a clearing in the middle of the woods where trees have been coppiced or felled and the light sneaks through the treetops. There between June and September I may find the foxgloves and the witch’s gloves and the fairy gloves and the folk’s gloves pointing skywards all together. 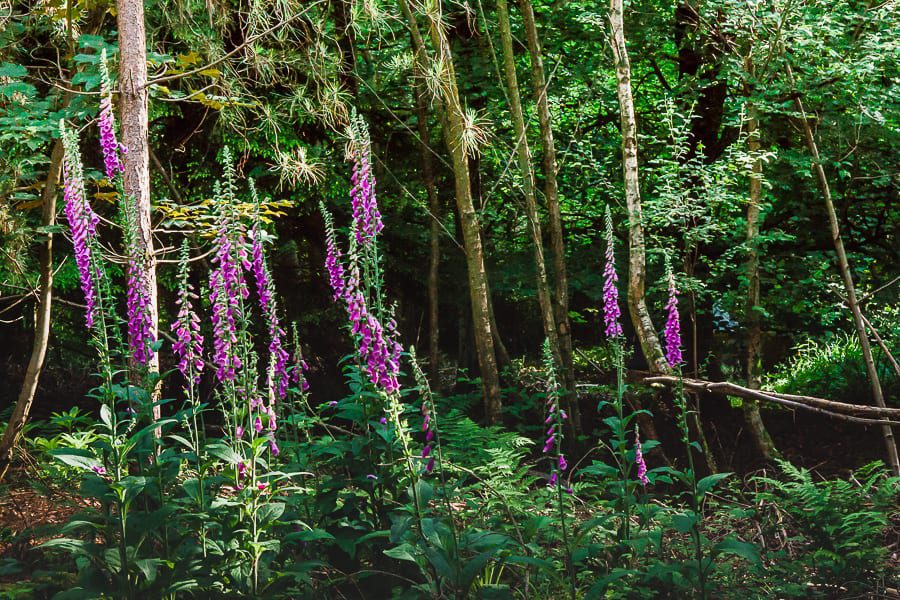