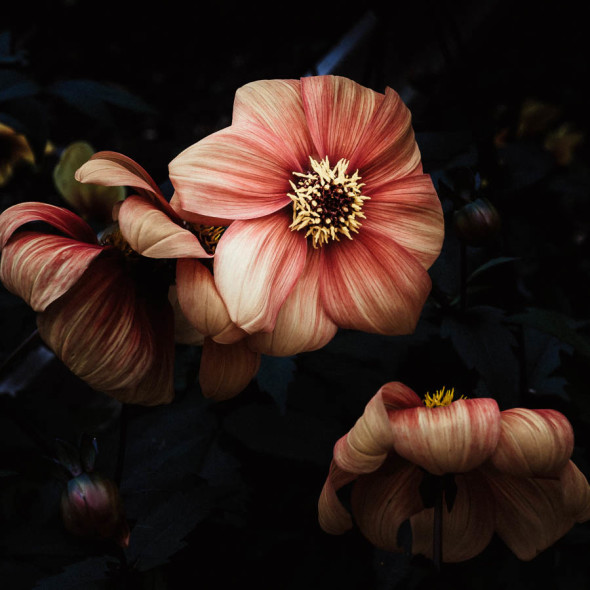 One evening during the carnival in Venice I stepped around a corner in a quiet lane and passed a couple in seventeenth century dress. It was as if I had stepped back in time. 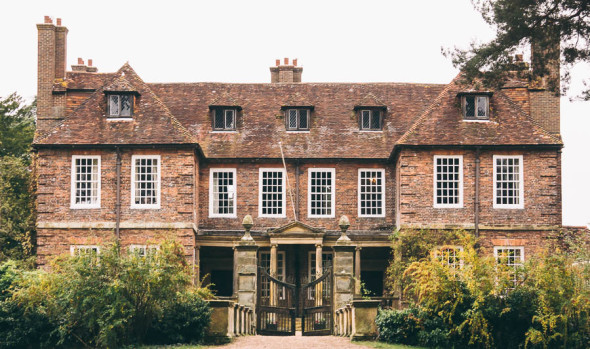 So I felt when I entered the formal gardens at Groombridge Place in the village of Goombridge, near Tunbridge Wells, in Kent. Whispers from the seventeenth century followed me as I wandered from one outdoor room to another with my twins Luce and Theo. 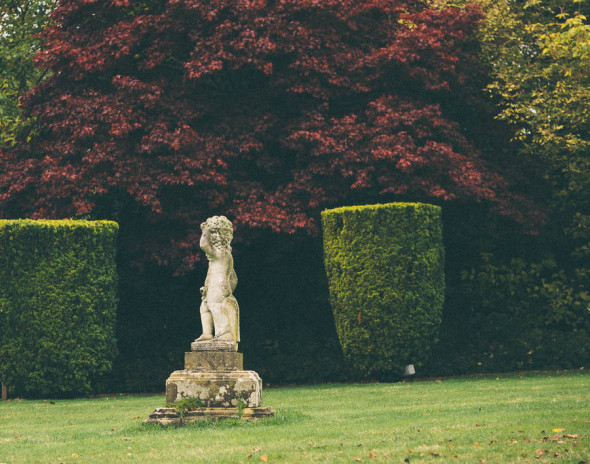 I expected to see Philip Packer with a wig of long flowing curls so popular in the Restoration period. He was a courtier to Charles II (1660–1685) and an original fellow of the Royal Society. His father bought the house in 1618 when it was sold to pay off gambling debts of the 3rd Earl of Dorset. Perhaps he’s talking to his friend Christopher Wren who apparently had a hand in the design of the house rebuilt in 1662.

Groombridge Place hasn’t changed in the last 350 years except for an occasional renovation. It stands in the centre of a moat where once there had been a Norman castle. Peacocks roam freely in the gardens. 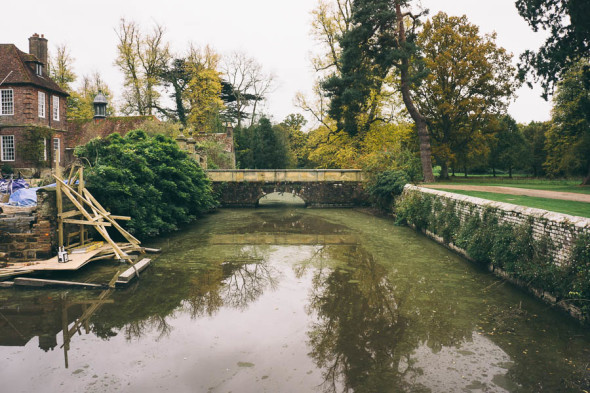 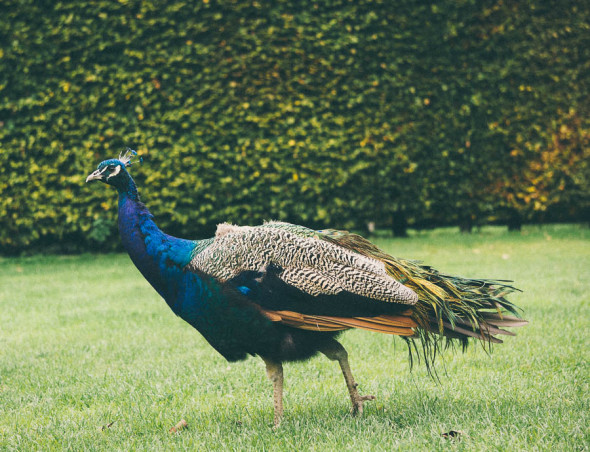 Can you hear Philip Packer chatting with John Evelyn (1620-1706), the diarist and horticulturist, who helped him lay out the “outdoor rooms” in the garden? The statue in the White Rose garden eavesdrops on their conversation. 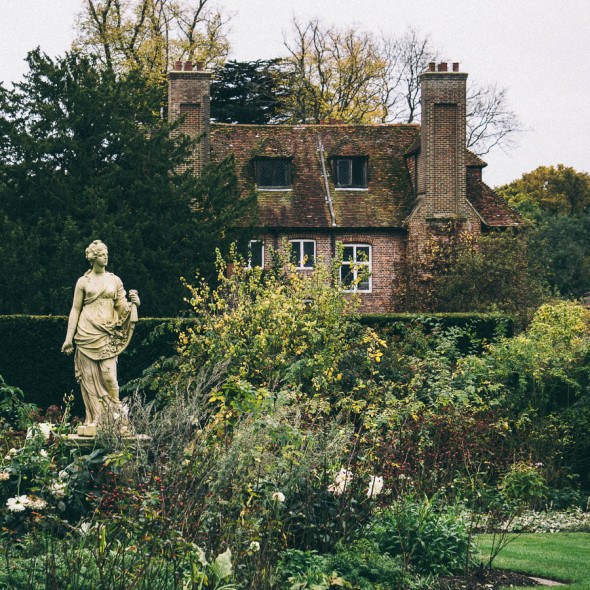 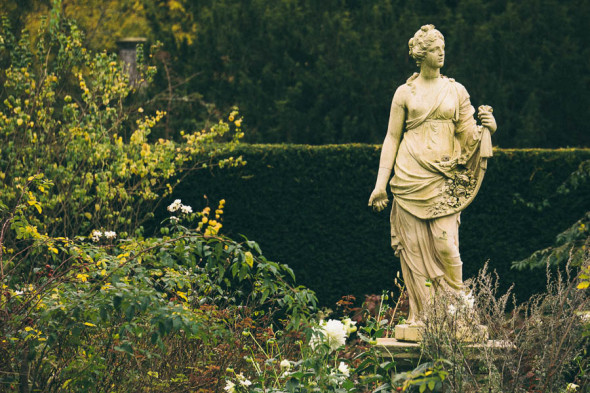 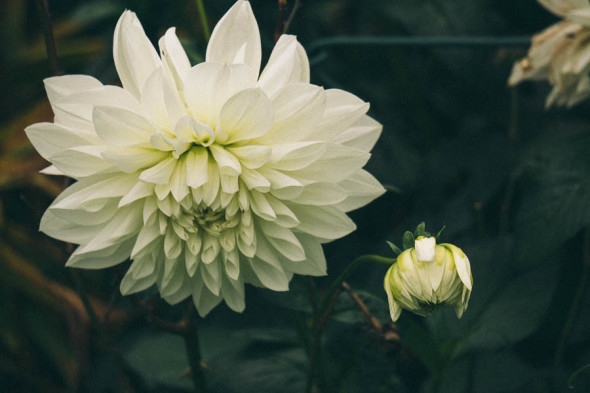 Was this Smoke Tree behind cupid planted yet? Over three hundred years later it shows off its splendid leaves on an Autumn day. 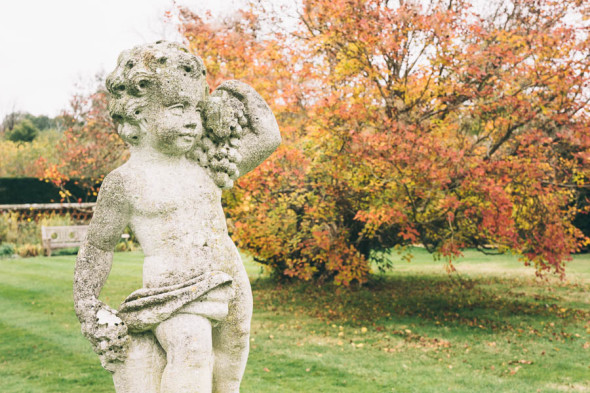 It’s been a long time since those first years of seeds and saplings. This ancient apple tree now needs a cane to keep standing. 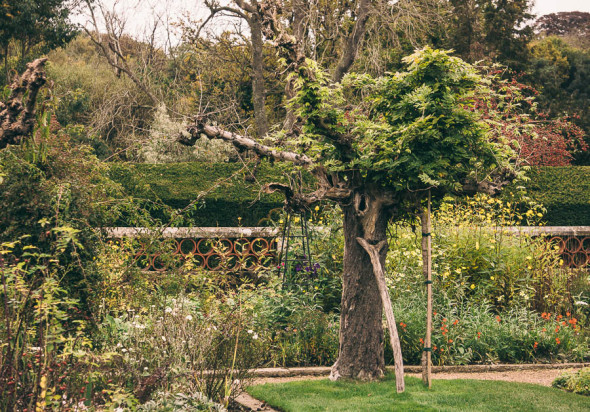 They pause in the Apostle Walk lined by drum yews planted in the 1670s. Then proceed until they reach the narrow canal crossing the formal gardens. 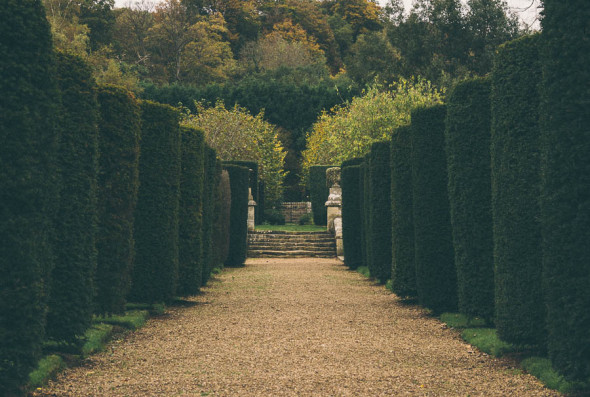 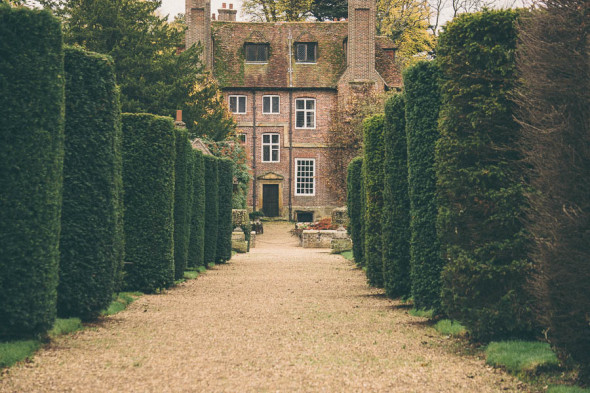 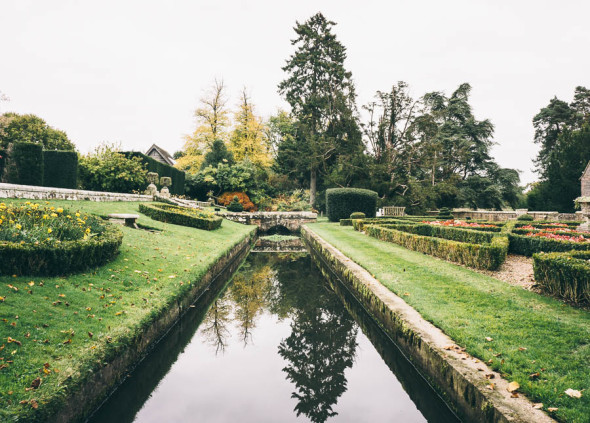 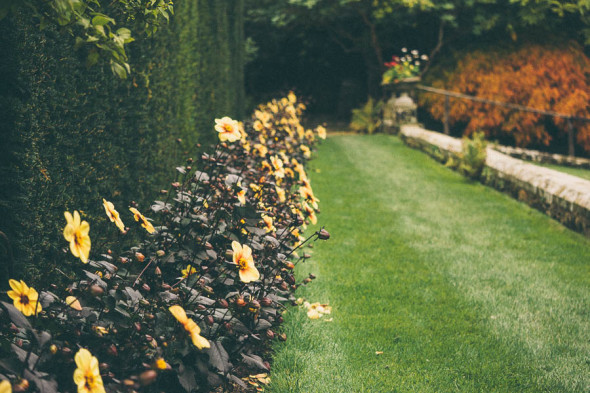 The chessboard and the crisscross beds only appeared when modern visitors came to these gardens. 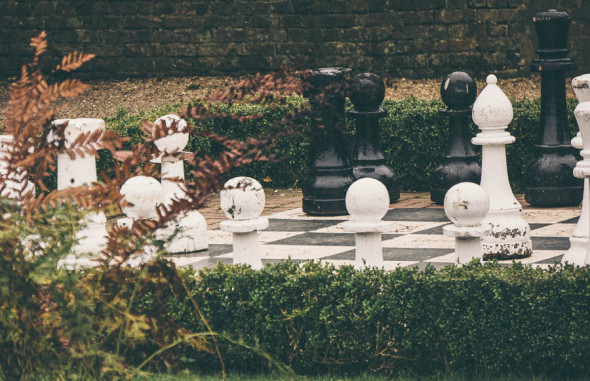 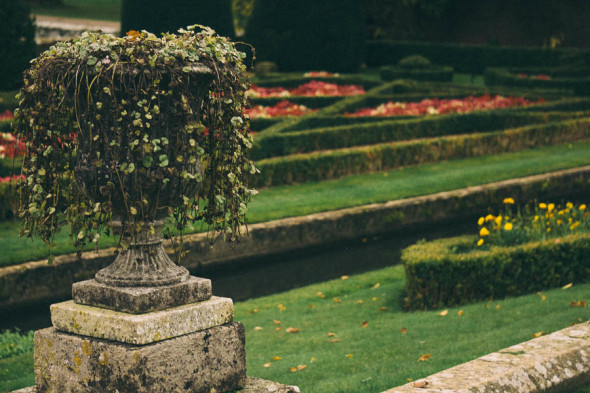 On a mild winter’s day, Christmas Eve 1686 in fact, Philip Packer died reading a book in the secret garden where a stream feeds the moat. In his diary a few days later, John Evelyn wrote “…little sign any Winter as yet…” 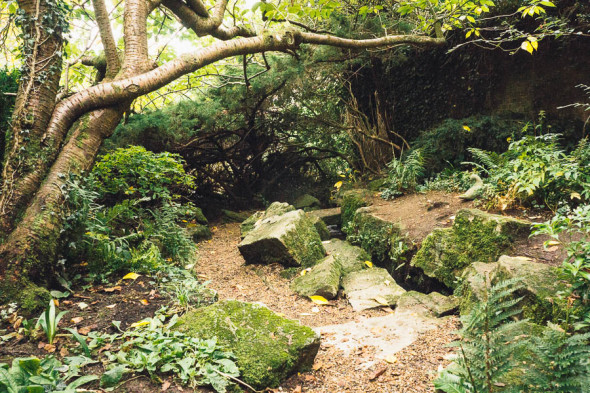 The seventeenth century wigs and elaborate coats were all on display when Peter Greenaway directed The Draughtman’s Contract here in 1982. This outdoor room is now known as the Draughtsman Lawn. Have a look here at the house, gardens and Restoration costumes. 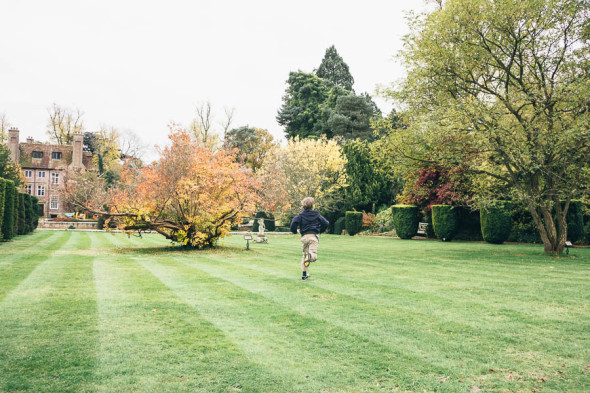 Different families then bought, lived and sold the house. In the nineteenth century they planted a lane of edible Kent cob nuts. Maybe a treat during a midday walk? Were these grapes growing then too? 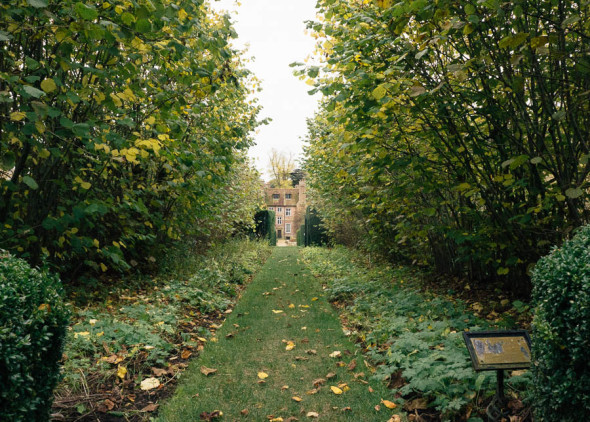 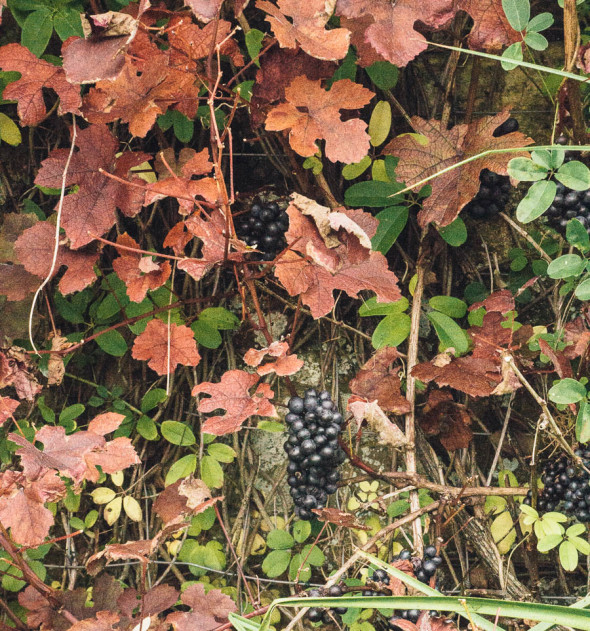 In the Drunken Garden Sir Arthur Conan Doyle is laughing with the sisters Sophia, Louisa and Eliza Saint. In the late 1800s he was often a house guest at Groombridge Place. In 1915 he published a Sherlock Holmes mystery called The Valley of Fear in which a murder takes places at Birlstone House. He based the novel’s Birlstone House on Groombridge Place – “an old manor with a moat and a drawbridge.” 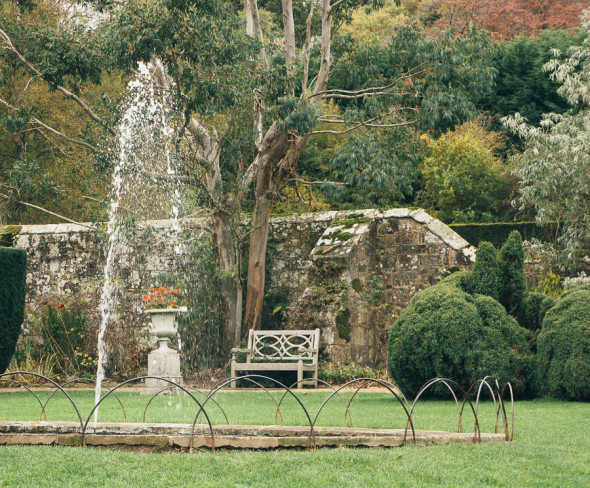 Conan Doyle also participated in séances at the house. The author claimed that one evening he encountered the ghost of Dave Fletcher by the cottage on the moat who told him he had drowned there. 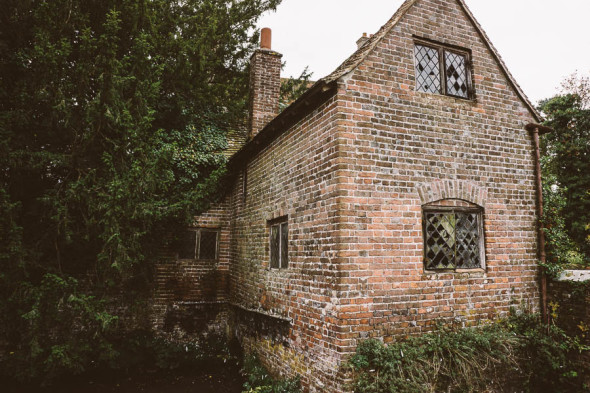 Is that the Bennet sisters gossiping nearby? 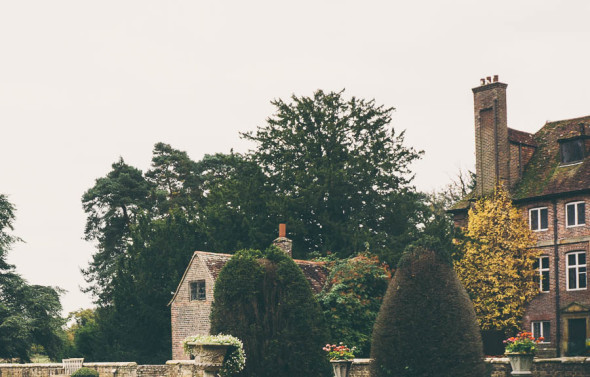 In the 2005 screen version of Pride and Prejudice with Keira Knightley it was the Bennet home. If you want a peek inside the house then take a look at this clip from the film.

The house is still a private residence. In 1992 paintings of Philip Packer and his seventeenth century family finally left the home when they were included in a Sotheby’s auction of the house contents.

A new owner told the Daily Telegraph in 2005: “When I arrived at Groombridge, I knew immediately this was the place. It is simply one of the most beautiful houses in southern England. Somehow it had been saved from developers, crazed ancestors and hopeless offspring selling off its crown jewels generation by generation. It was intact.” 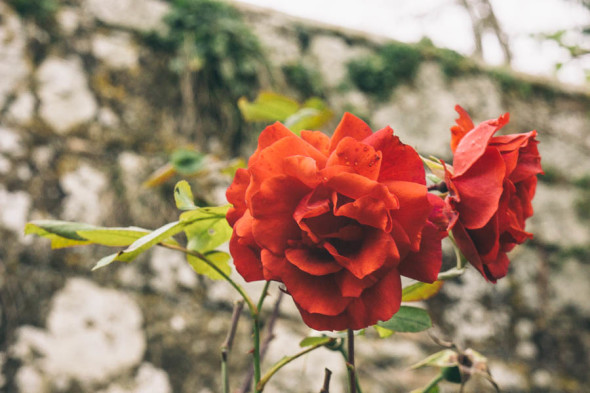 The gardens opened to the public in 1994.

Monday to Friday entrance fee for the gardens only is £6. Children under five are free. Tea or coffee and a slice of cake are included if you buy the £10 ticket. These tickets and fees do not apply on special event days.

You can find out more on the latest events and fees on their website.

If you want to visit the Enchanted Forest and more at Groombridge Place and not just the formal gardens then different fees apply. Find out more in a separate post on what happened with my twins in the woods.