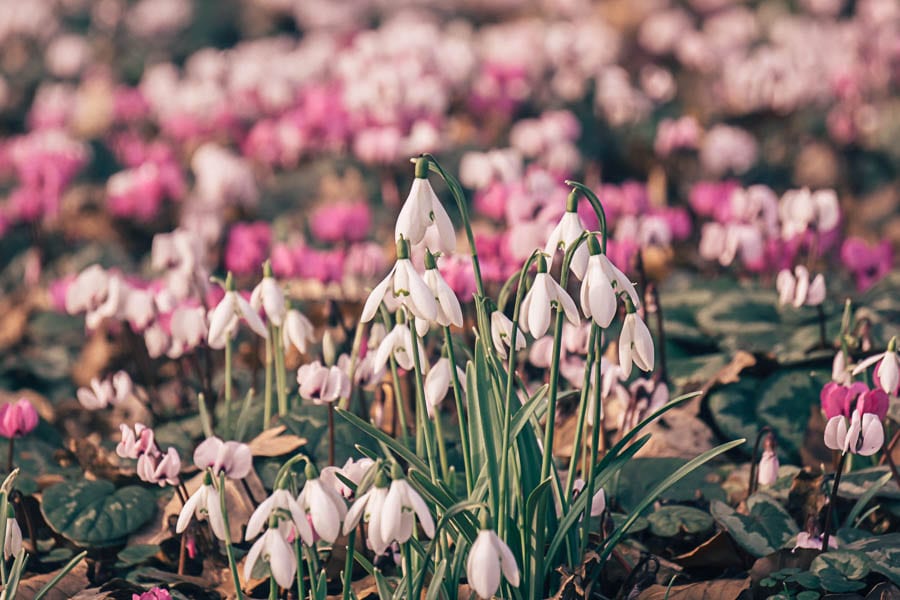 It’s snowdrop season! From January to March  – depending on regions and the weather – carpets of snowdrops in woodlands, meadows and gardens signal the end of winter and the promise of spring.

Now I might be enthusiastic about walks where I can admire these harbingers of spring but I want my kids  – nine year old twins – to appreciate them as well. If I told them snowdrops are herbaceous perennial plants that belong to the Amaryllidacea family their eyes would glaze over and they’d ask me where they could find the nearest good tree to climb. So I tell them fun and unusual things about snowdrops to make the walk interesting. This tactic worked during bluebell season when I taught them 10 unusual facts about bluebells.

I don’t go on about that there are 20 wild species and over 2,000 cultivated varieties with tiny differences in mutations. Instead… 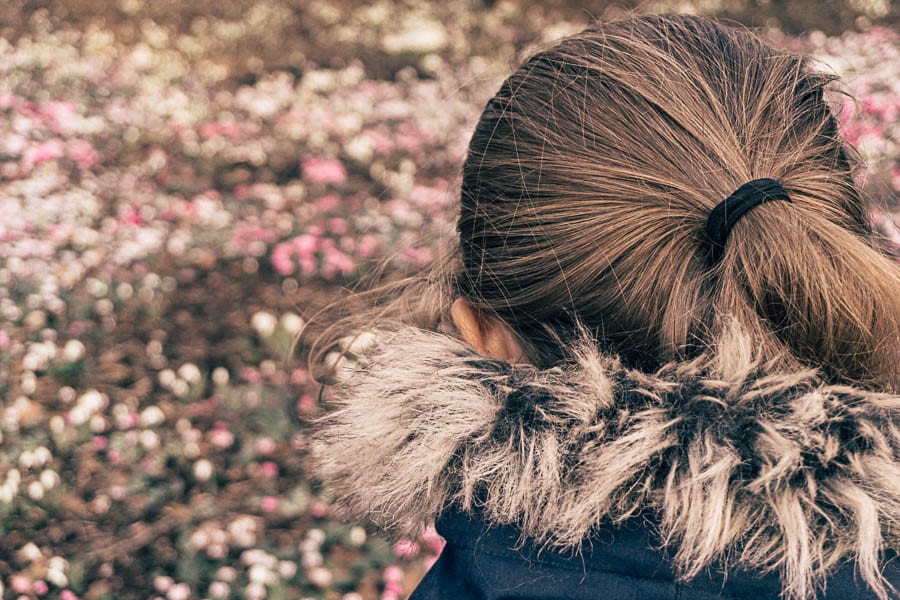 1. Snowdrop’s scientific name is Gallanthus. This means ‘milk flower.’ The common snowdrop we normally see with one flower per stem is a Galanthus nivalis which translates as ‘milk flower of the snow.’ 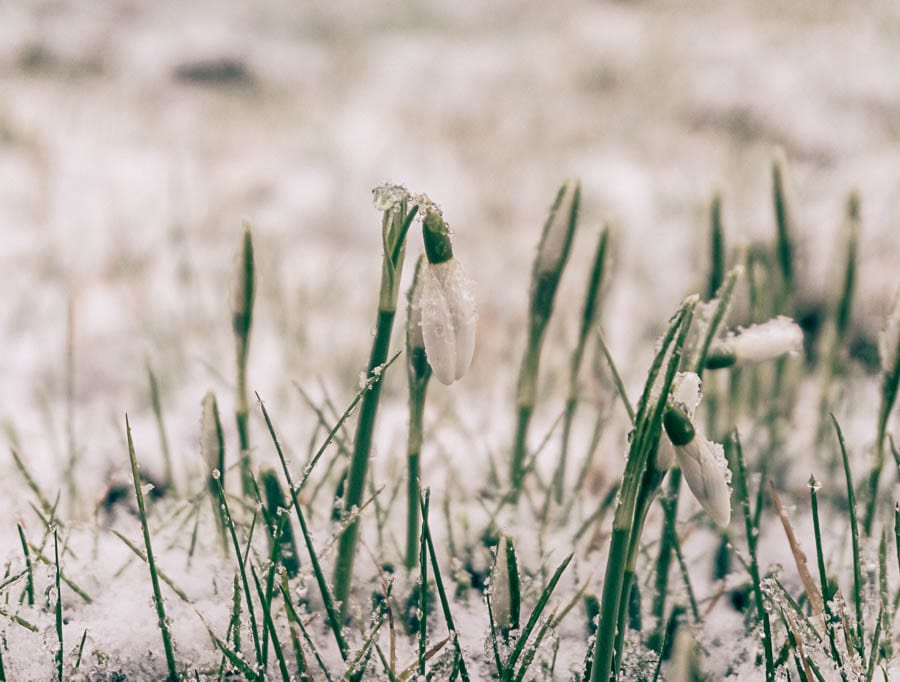 2. Snowdrops were named after earrings not drops of snow. In the 15th, 16th and 17th centuries women often wore dangly, white drop-shaped earrings known as ‘eardrops.’ Some other common names of snowdrops are: Fair Maids of February, Candlemas Bells,  White Ladies, Little Sister of the Snows, Snow Piercers, Dingle-dangle, Flower of Hope and Death’s Flower.

3. Snowdrop’s contain a natural anti-freeze. Even if they collapse in freezing weather they recover once the temperature rises. 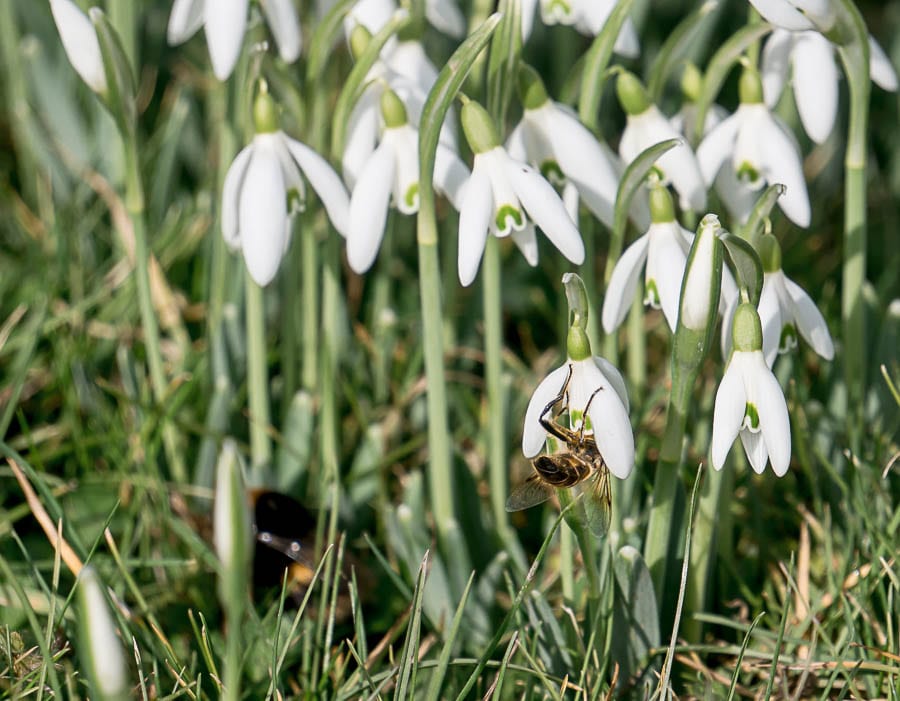 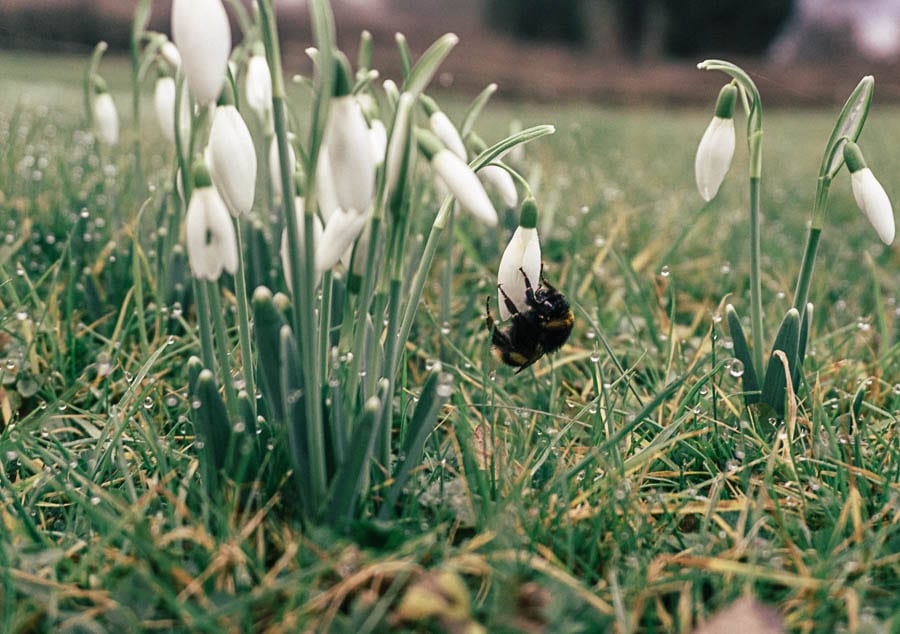 4. When temperatures reach 10C (50F) and above, the outer petals open up revealing the nectar inside. When the temperature drops the petal shield closes and protects the nectar. Nature is rather magical as this is perfect for bumble bees which come out of hibernation when the temperature rises above 10C!

Snowdrop pollen and nectar is an early spring feast for many bees. The green stripes inside the snowdrops are like landing lights guiding them to one of the only restaurants open this early in the season. 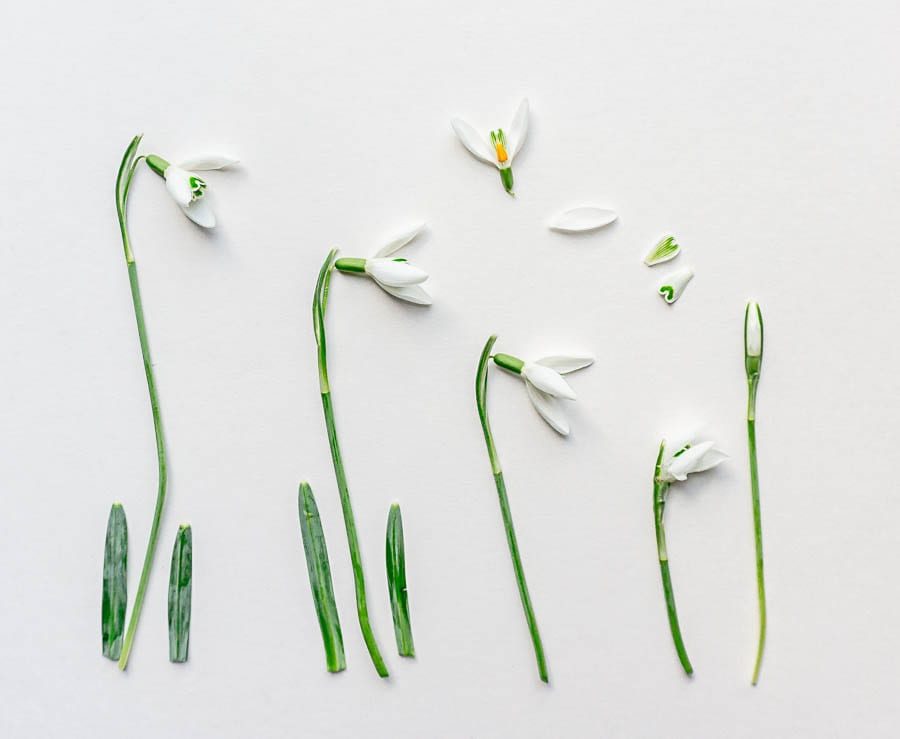 5. Snowdrops and their bulbs are poisonous to humans. Some people have mistaken their bulbs for onions or shallots but they would have to eat an awfully lot of them to be fatal.

6. Snowdrops are used in medicine to help people. Galamantine extracted from snowdrops is now used in a treatment to slow down dementia in Alzheimer’s disease.

In folk medicine, snowdrops have been used as remedial herb to ease pain, migraines and headaches. 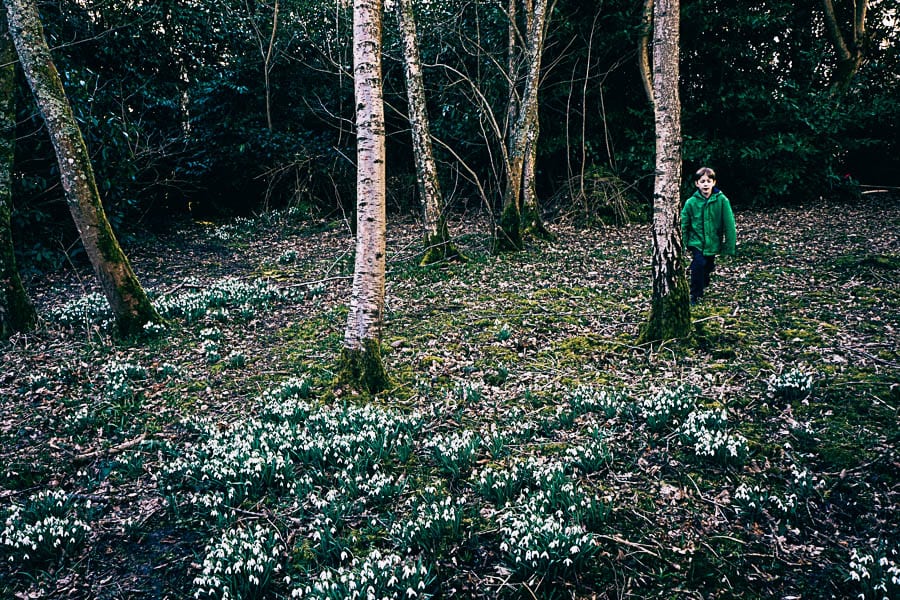 7. Although there are gardens and woodlands where we can see thousands and thousands of snowdrops, they are endangered and even under threat of extinction in some countries where they naturally grow in the wild. This is because too many were dug up to sell to gardeners across the world.

Since 1995 international trade has been banned unless you have a special license. 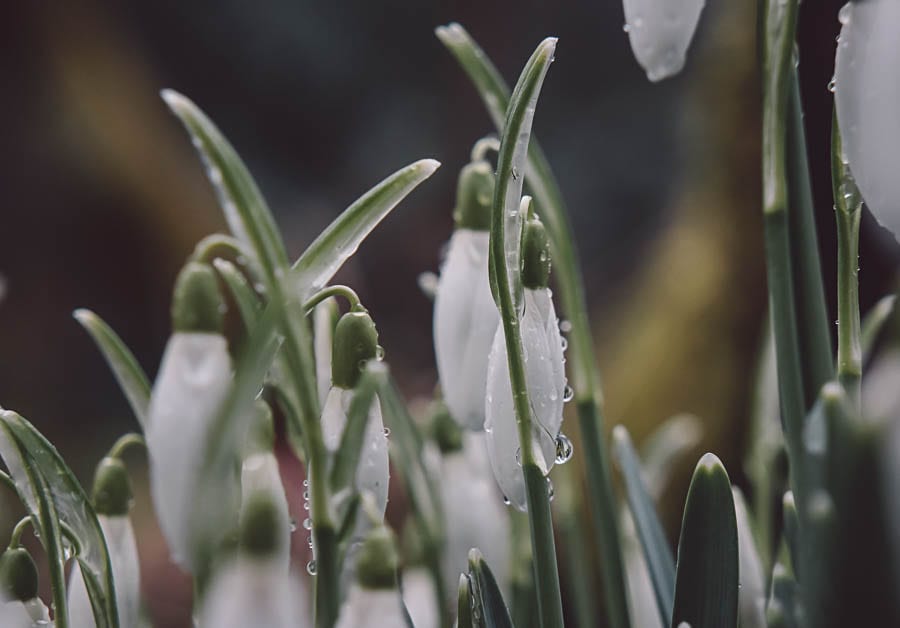 8. There are lots of legends and myths about snowdrops.

One of them was the belief that you should never bring in a single or first snowdrop into the home as it was unlucky or even meant there would be a death soon. That’s why it’s known sometimes as the ‘death-flower’ and the flower is described as a ‘corpse in a shroud.’

It’s also been known as the symbol of hope. 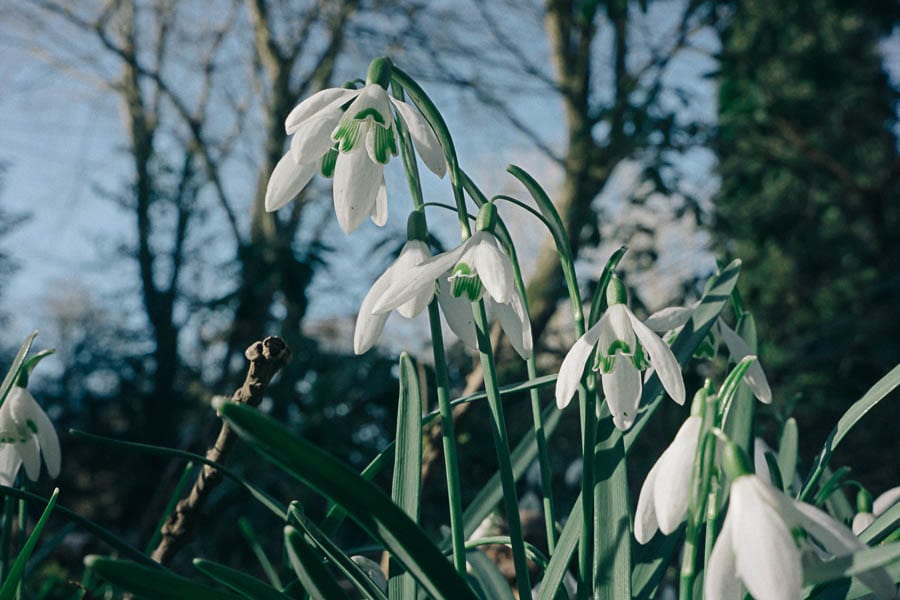 9. During World War 2, the U.S. Military Police were given the nickname ‘snowdrops’ by British civilians.

This was because their olive green uniforms with white cap or helmet and white gloves made them resemble snowdrops. 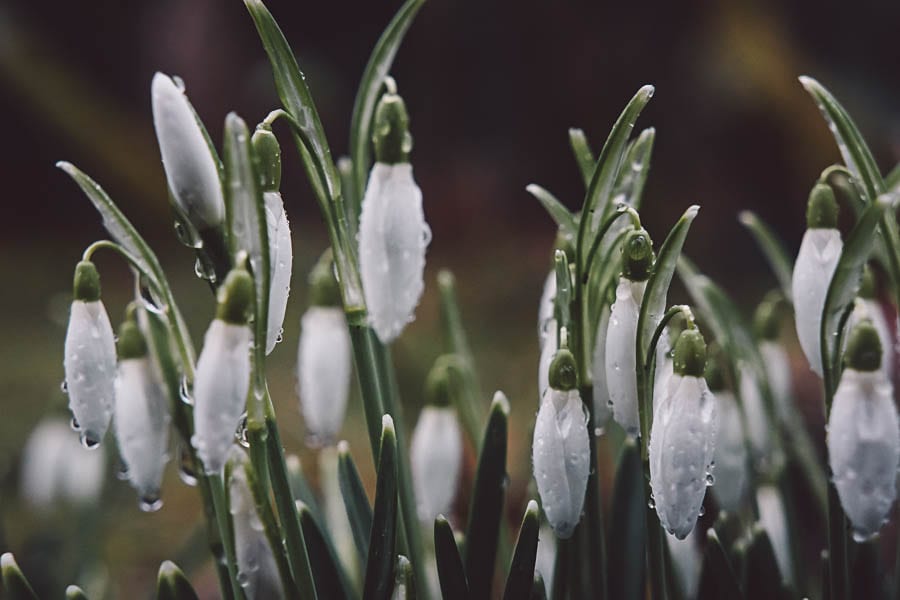 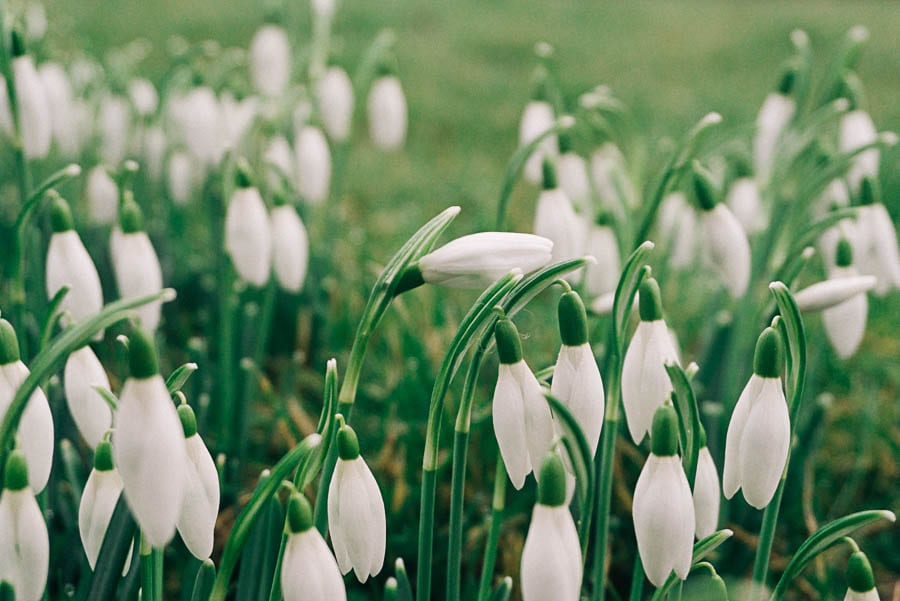 10. Galanthomania! People who are crazy about snowdrops and/or collect them are known as ‘Galanthophiles.’

Some of these collectable bulbs are so precious they are kept locked up or watched over by security guards. As a result of this Galanthomania –  snowdrop craze – there are snowdrop galas and special events held worldwide attended by Galanthophiles.

UPDATE: A new record was set in February 2022, according to Garden Illustrated, when Galanthus plicatus ‘Golden Tears’ was sold on eBay for £1,850 plus £5 postage. Like the previous record, this snowdrop was bred by Joe Sharman of Monksilver Nursery known as the ‘king of snowdrops.’

There are actually many legends and myths about snowdrops which are native across large parts of Europe extending out to the Ukraine, western Turkey and even parts of the Middle East. They are not native to the UK although they were introduced before 1600.

I might not be a Galanthomaniac but I do enjoy visiting snowdrop gardens in the early spring with my kids. 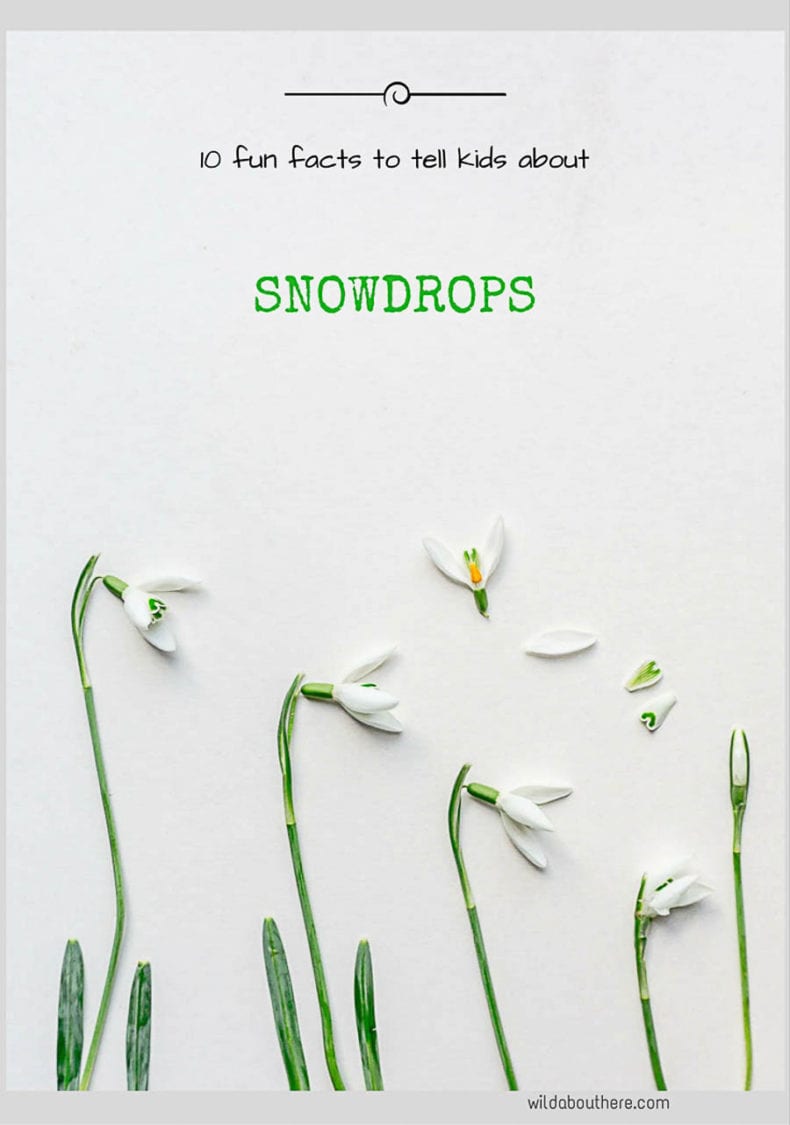 Previous Post: « How I feel chic again with a wood watch
Next Post: My botanical desk – Autumn nature diary »