You are here: Home / Wild Kids / Tree hugging an ancient 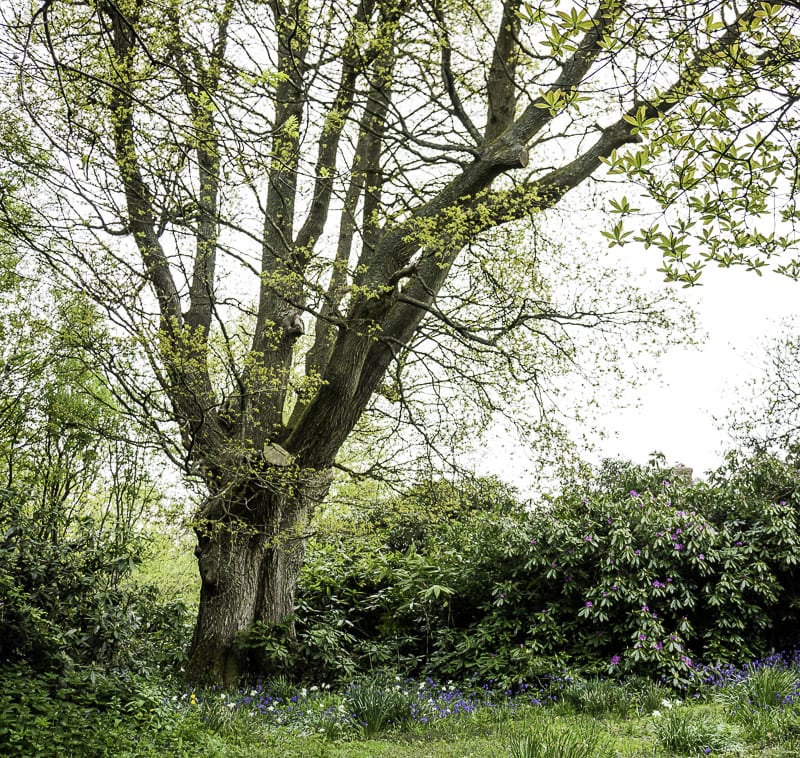 I recently asked a group of kids to hug a tree. This group naturally included my twins Luce and Theo. Now, before you start to think that I was doing this to make them feel closer to nature or turn into ‘tree huggers,’ that wasn’t my aim.

Sometimes environmentalists are known as tree huggers due to their work to protect and preserve woodlands. As a young journalist I actually covered in 1996 Swampy and other eco-warriors who were living among – and even chained to – trees to stop the construction of a bypass in Newbury.

No, I wanted the kids to hug a tree to estimate its age! Nor was I planning for some random tree hugging but had one particular oak I wanted them to date. I’ve written before about visiting this ancient tree on private land with Luce and Theo but no one was sure exactly how old it was. (Luce and Theo have also grown since this picture of them standing by the oak last summer!) 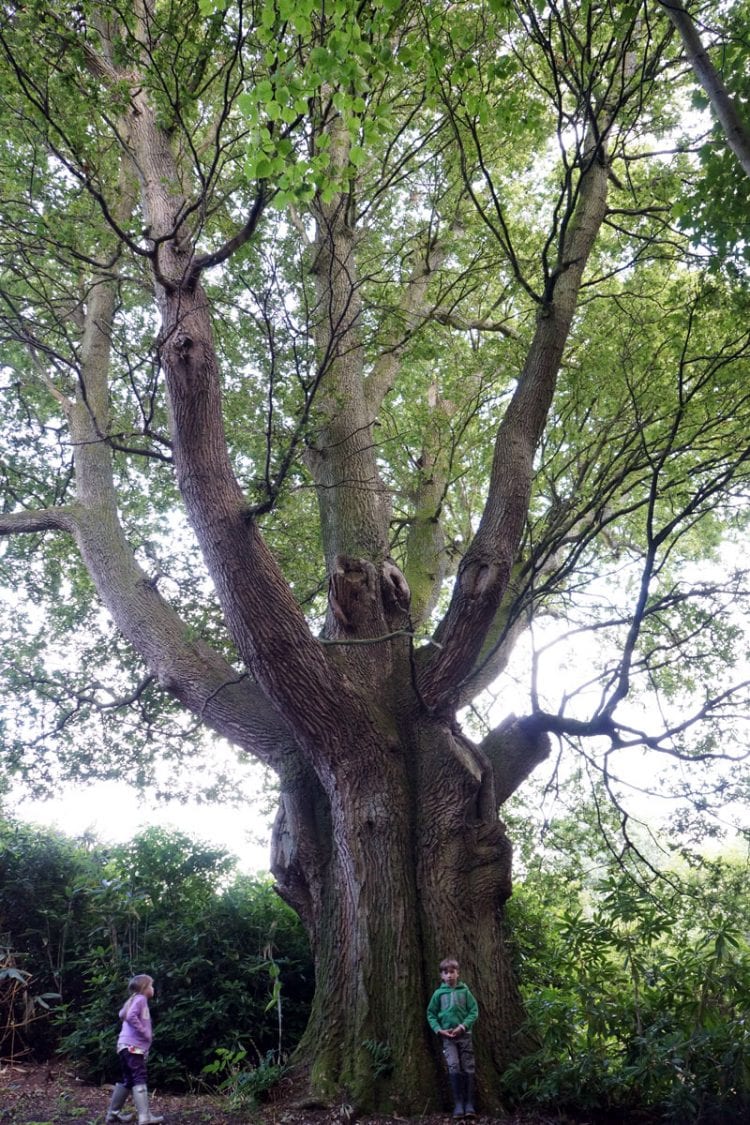 Then I read in Tessa Wardley’s The Woodland Book  that you can age a tree by hugging it.

Tree species grow at the same rate under similar conditions. So, for example, if you planted a couple of beech trees near each other in your garden, every year their girth and height will grow at a similar rate. If you also planted a couple of oak trees they would grow together at a different rate from the beech trees. 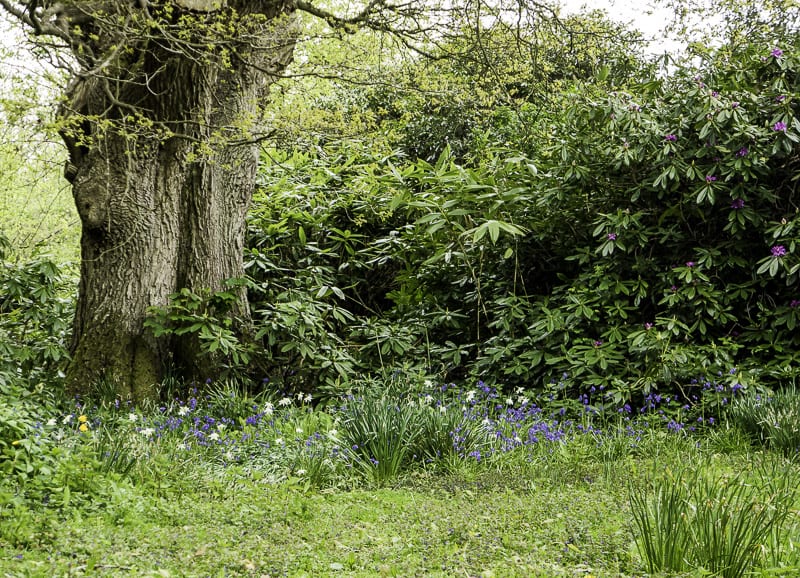 In order to age a tree without cutting it down and counting the rings in the trunk you can calculate how old it is by the size of its circumference at breast height. The Diameter Breast Height (or DBH) – yes, that’s the official term – of a tree trunk varies from 1.3 to 1.5 metres according to different countries and groups. 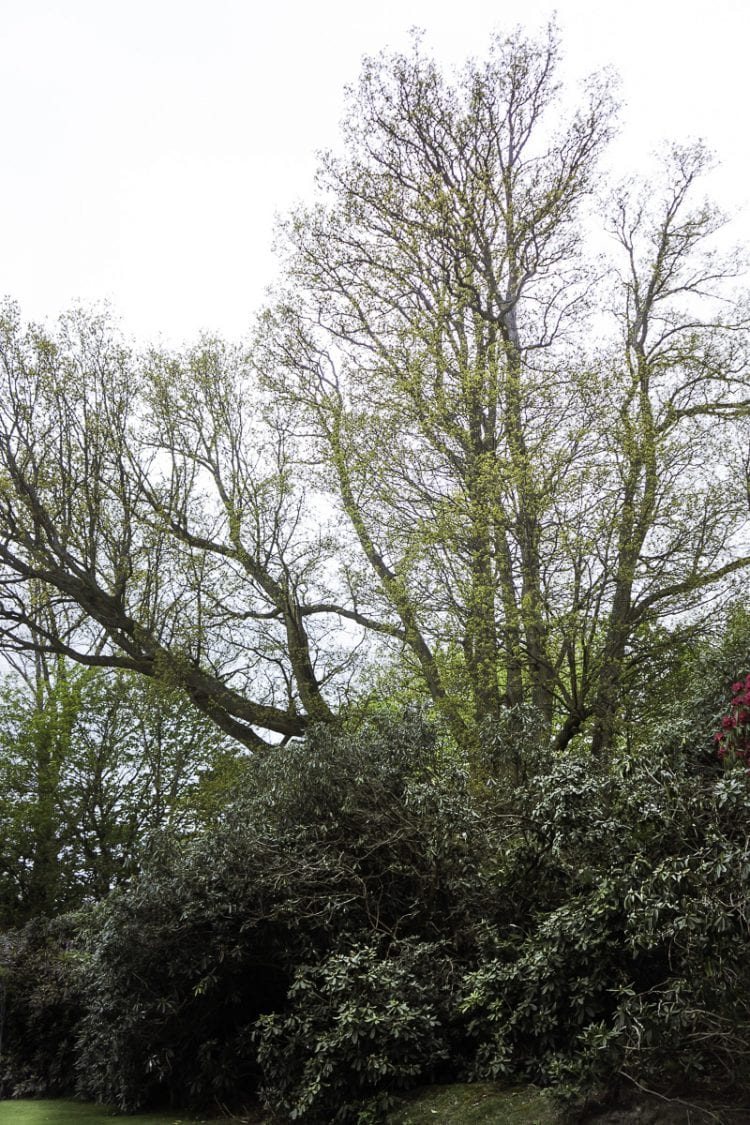 The ancient oak surrounded by shrubs

Then there’s a tree aging formula which is DBH x ‘growth factor’ to estimate the age of the tree. The growth factor is different for different tree species and can vary depending on the conditions of the location, such as whether it’s been pampered in open parkland or unprotected inside woods.

Hug a tree to measure its girth

You don’t need the tape measure as you can also work out if a tree is ancient by hugging it. The average arm span is approximately equal to your height. Generally an average adult ‘tree hug’ is considered 1.5 metres from finger tip to finger tip. We measured all the kids heights to know their arm spans.

How many hugs does an ancient tree need?

According to the Woodland trust, a tree might be ancient if it has the following measurements in HUGS: 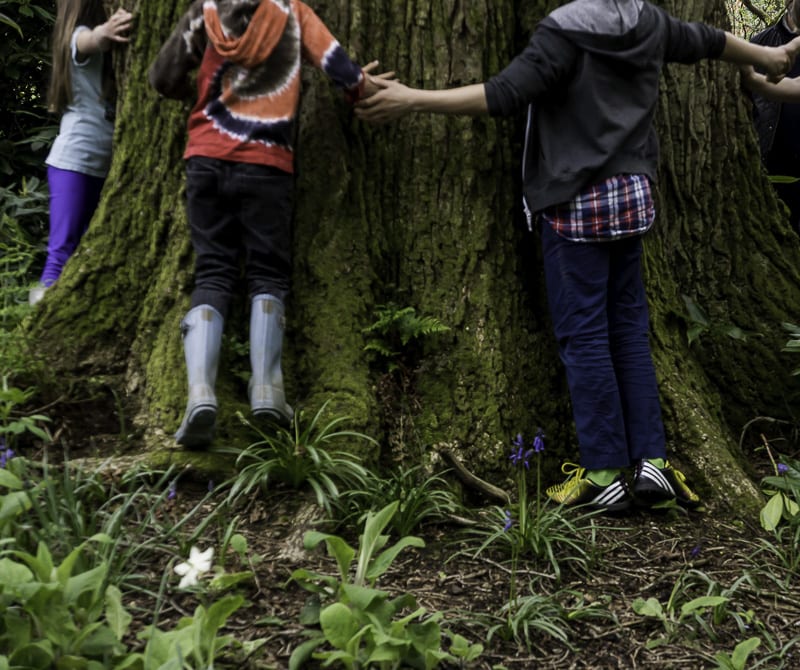 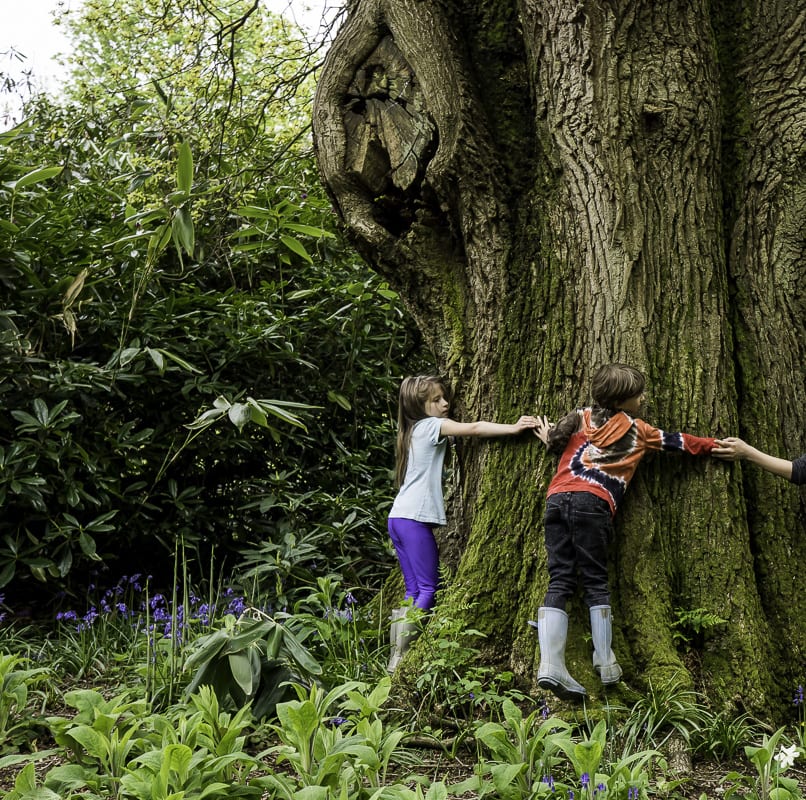 Five children hugs were needed for our oak. This was a total of 710 cms! But how ancient was it?

According to my book I just needed to divide this by 2 to find out the age, which meant the tree was only 355 years or so old. Yet, we were sure the tree was much older.

Back home I found online a complicated paper by the Forestry Commission about ‘Estimating the Age of Large and Veteran Trees in Britain.’ There were all sorts of different calculations depending on the conditions where a tree species was located. In sum, this oak could have been anywhere from 440 to 575 years old.

Then I found another paper by the Woodland trust on how to estimate the age of oak trees. The calculations were based on an oak growing in open conditions in the south-east of England which is roughly the same as the one dated by our young tree huggers. Our ancient oak was at least 515 years old!

My US readers can find a tree aging formula for American tree species in this Forestry post. 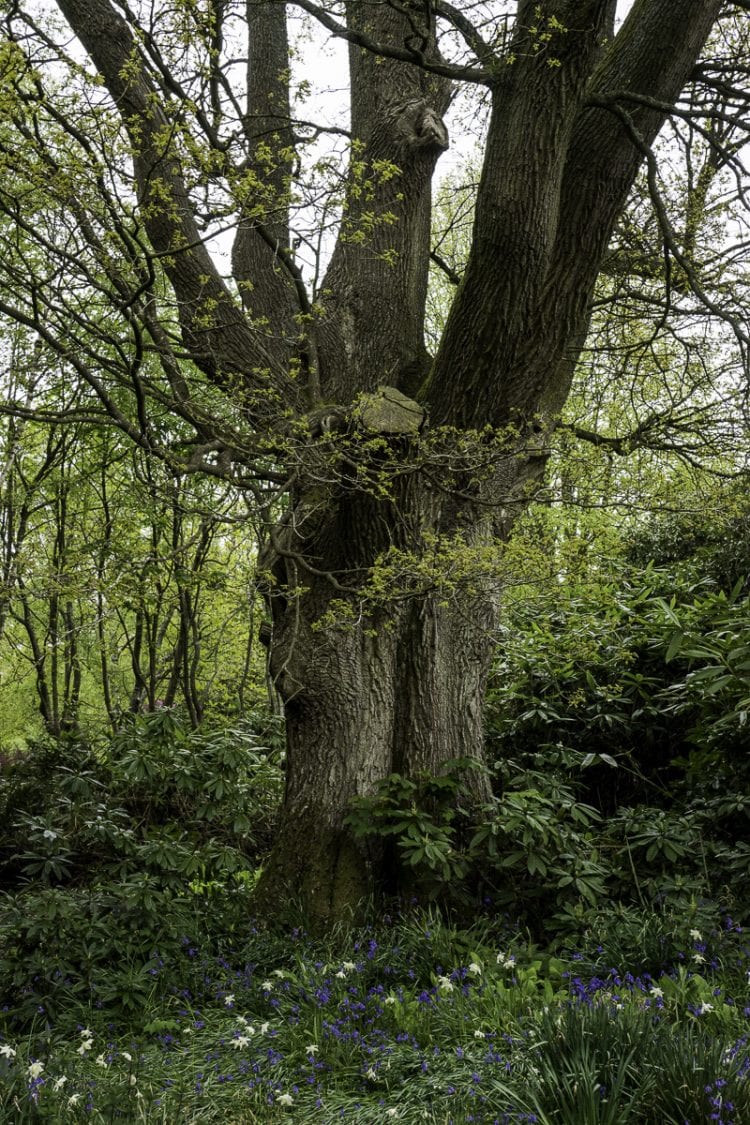 From the tree hug we now knew that this ancient oak was probably an acorn when Henry VII ruled England from 1485 to 1509. It would have been a young oak while Henry VIII went through eight wives. In my view this oak tree over a half a century later deserved a special hug from five children. 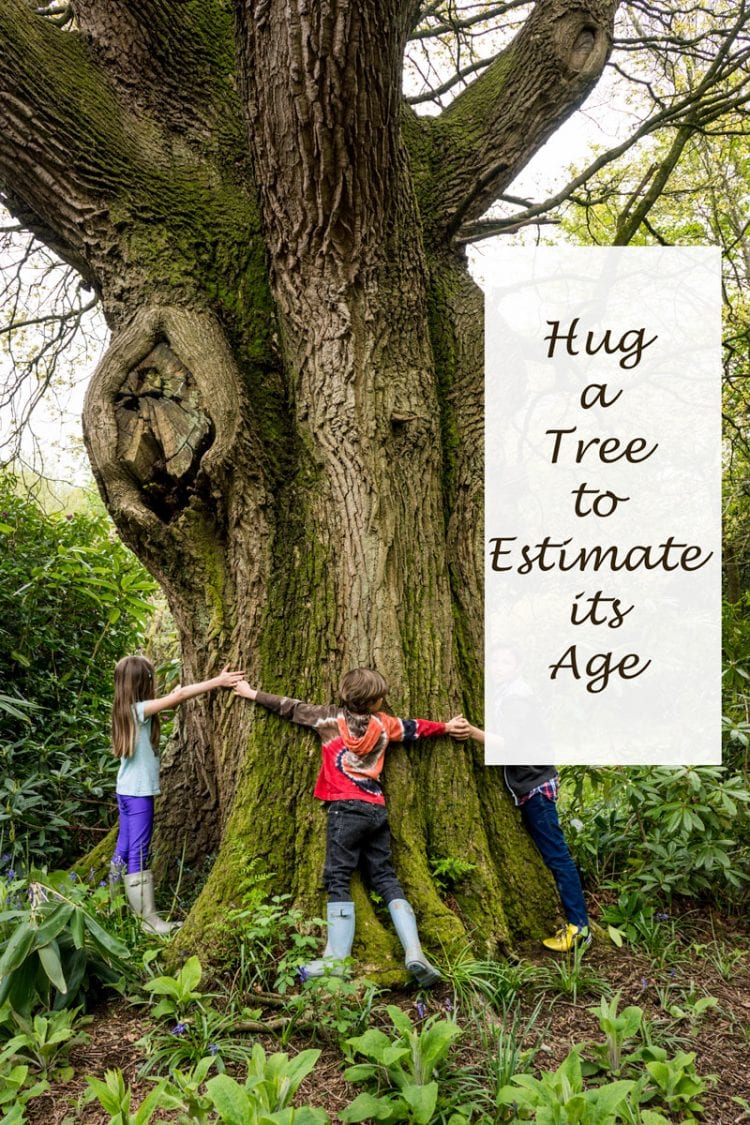