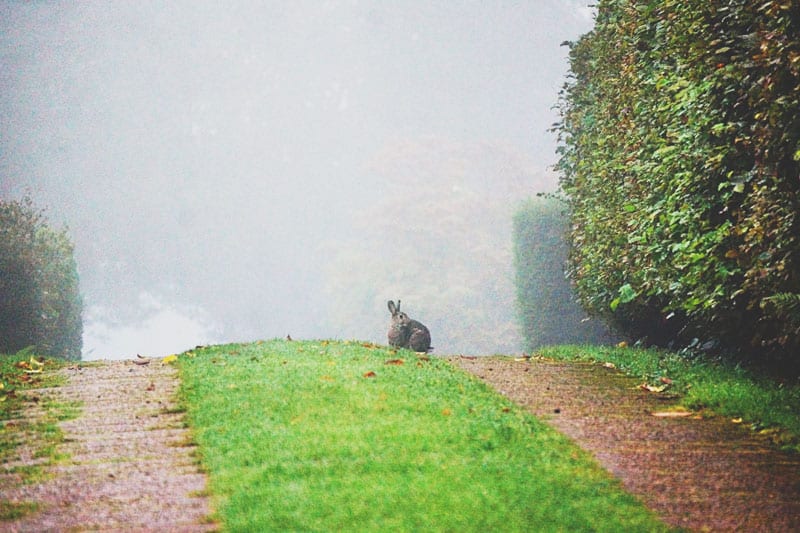 A thousand years ago there were no rabbits in the UK and now there are about 40 million. So if you live in the English countryside, like we do, they’re rather a common sight – especially at dawn and dusk when they’re most active. But, my children have discovered that if they try chasing wild rabbits in one of the grass fields near our garden then within a flash all they see is small white tails disappearing into the bracken and woodland nearby. 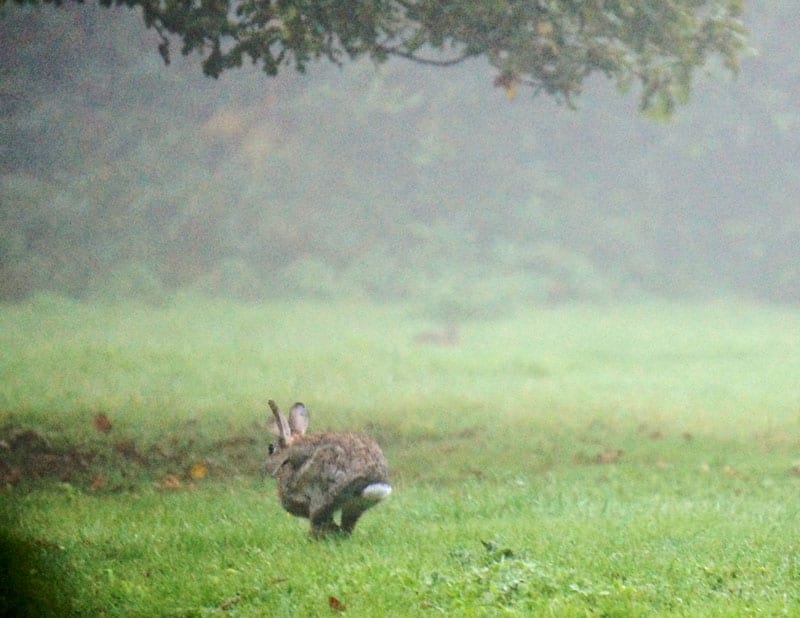 A few mornings I’ve sat quietly behind a shrub with my children in order that they can watch these herbivores dine on grass. Wild rabbits like fields and open countryside where they can keep a lookout for predators – especially foxes, stoats and birds of prey. 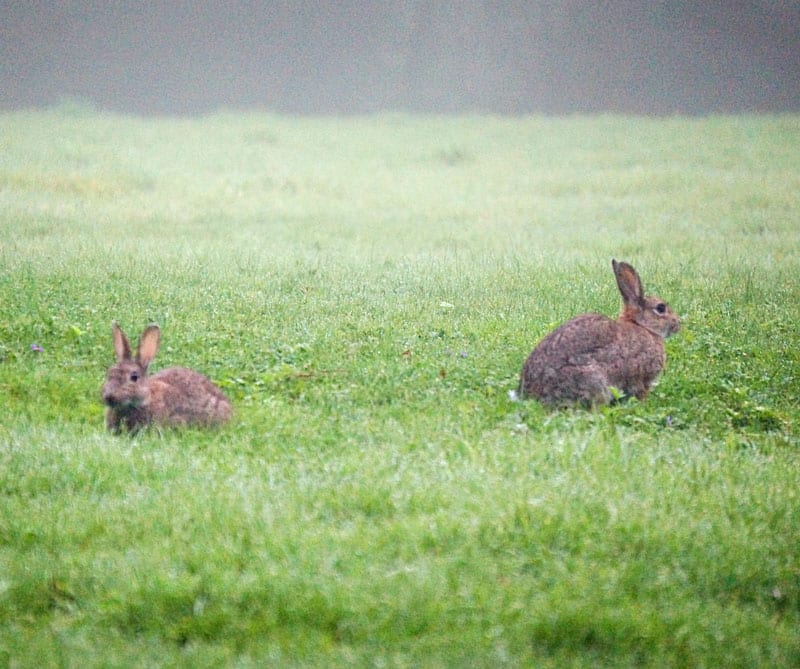 On these spotter adventures we’ve observed how bunnies have eyes on the sides of their head and large ears to help them look out for danger. We’ve seen them stand up on their strong hindlegs to scan for any enemy – although so far not seen them thump their feet to warn other rabbits. 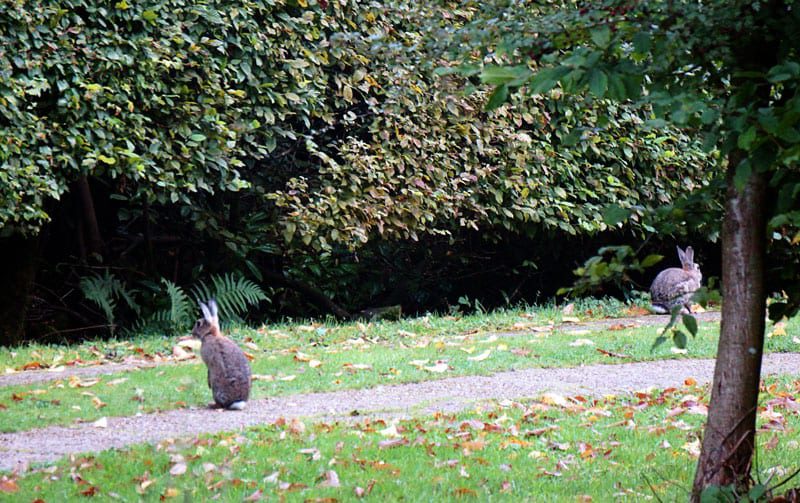 Rabbits may now be native wildlife in Britain but they were first introduced by the Normans in the 12th century. 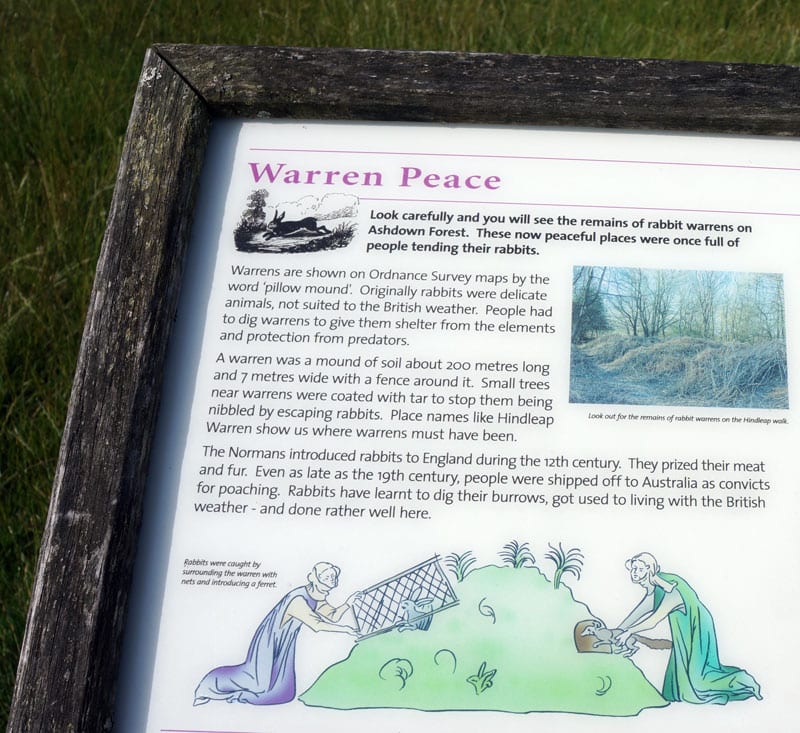 We went on the Hindleap walk in the Ashdown Forest this summer and discovered that fenced in warrens were built there that were 200 metres long and 7 metres wide to breed rabbits for fur and meat. In these earlier days rabbits were not yet accustomed to the English weather and countryside!  In one area we could see signs of these mounds of soil which are marked as ‘pillow mounds’ on Ordnance Survey maps. 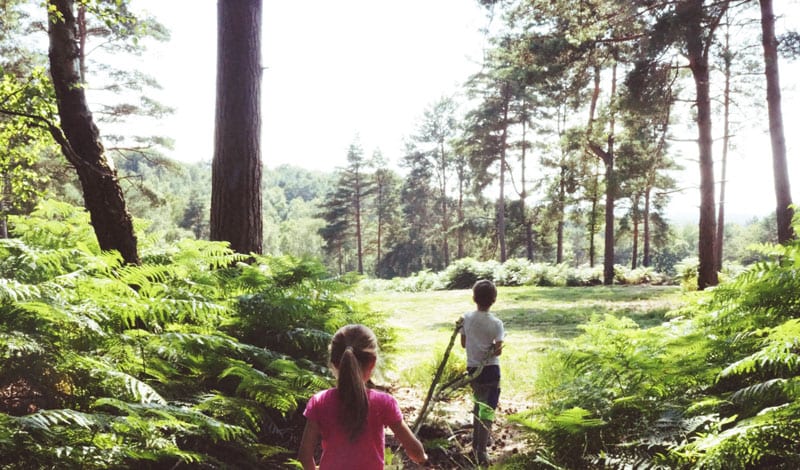 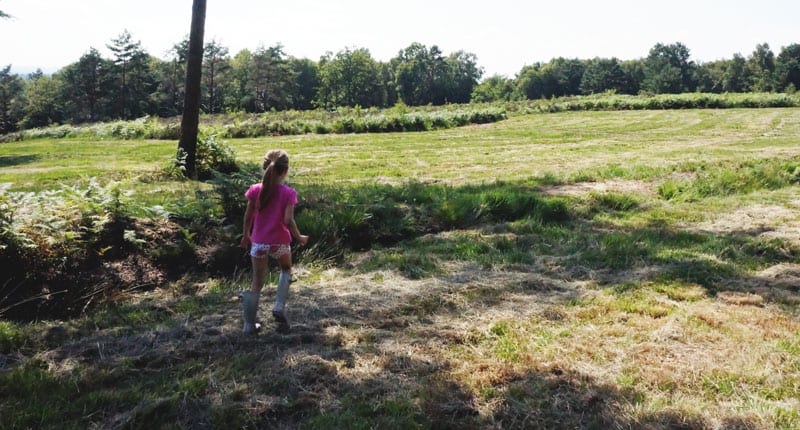 And all along the edge of the grass fields by our garden we’ve discovered the entrances to their burrows. Rabbits feel safest in their underground warrens under hedgerows, amidst brambles or nearby woodland. 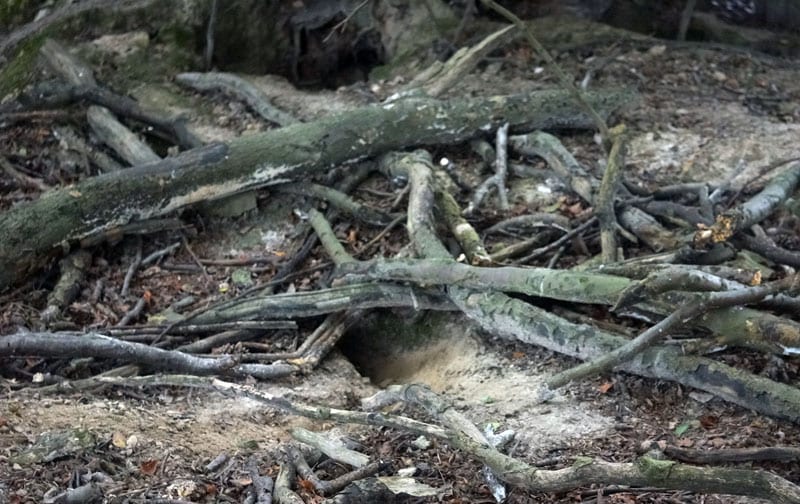 My kids were amazed to find so many burrows and that the tunnels could house up to a 100 rabbits all living together in various social units including small family groups. It’s like having villages of bunnies living alongside us – or I should say underneath us. We had a chance to watch them inside a burrow when we recently visited the British Wildlife Centre in Surrey. 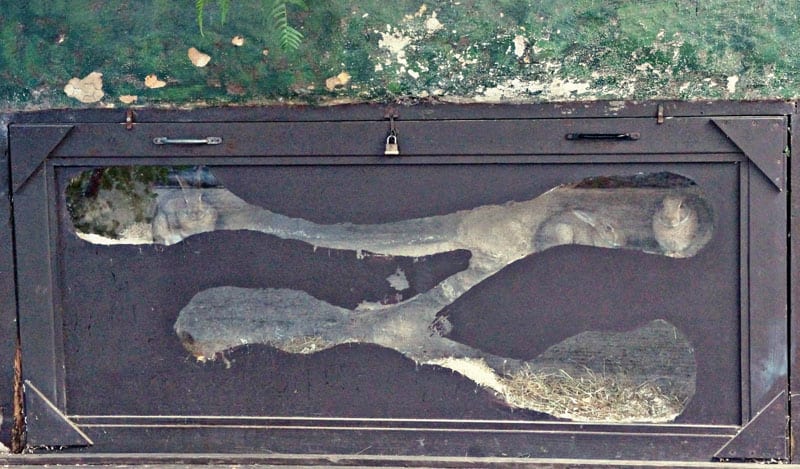 This week I discovered my little wildlife spotters trying to tempt our small furry neighbours with some carrots, but of course they scampered away! My daughter followed them into the bracken but they returned to their underground homes. 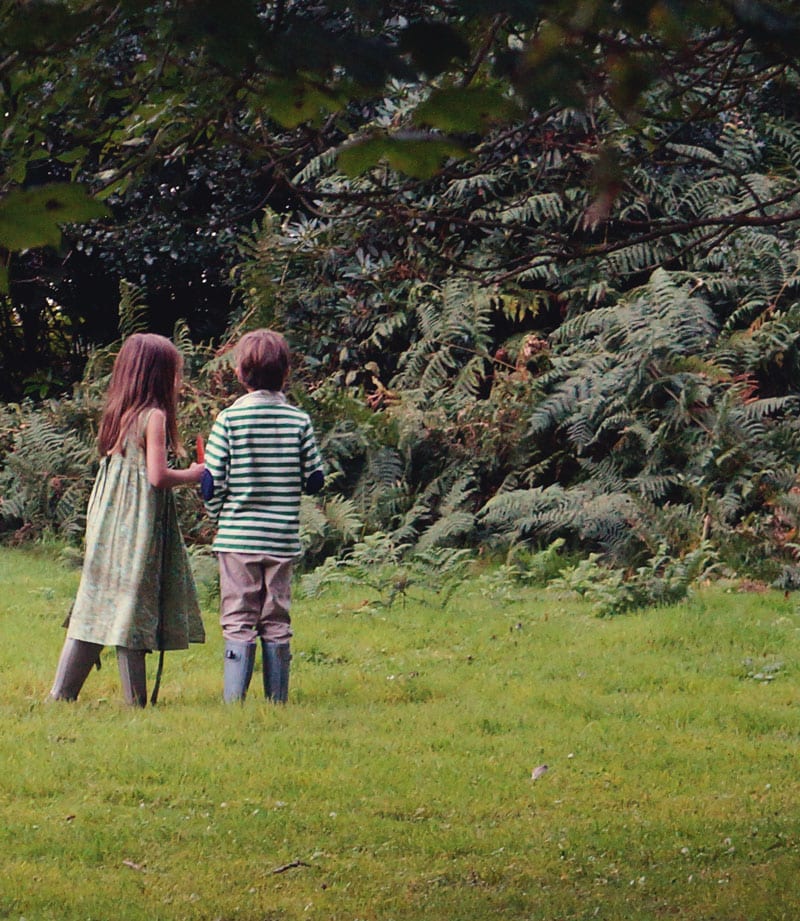 But when humans and predators are not around, the rabbits will be back out nibbling the grass away in farm fields and formal gardens. Not surprising as their teeth never stop growing (up to 3 mm a week!) and they need to wear them down by grazing and foraging. 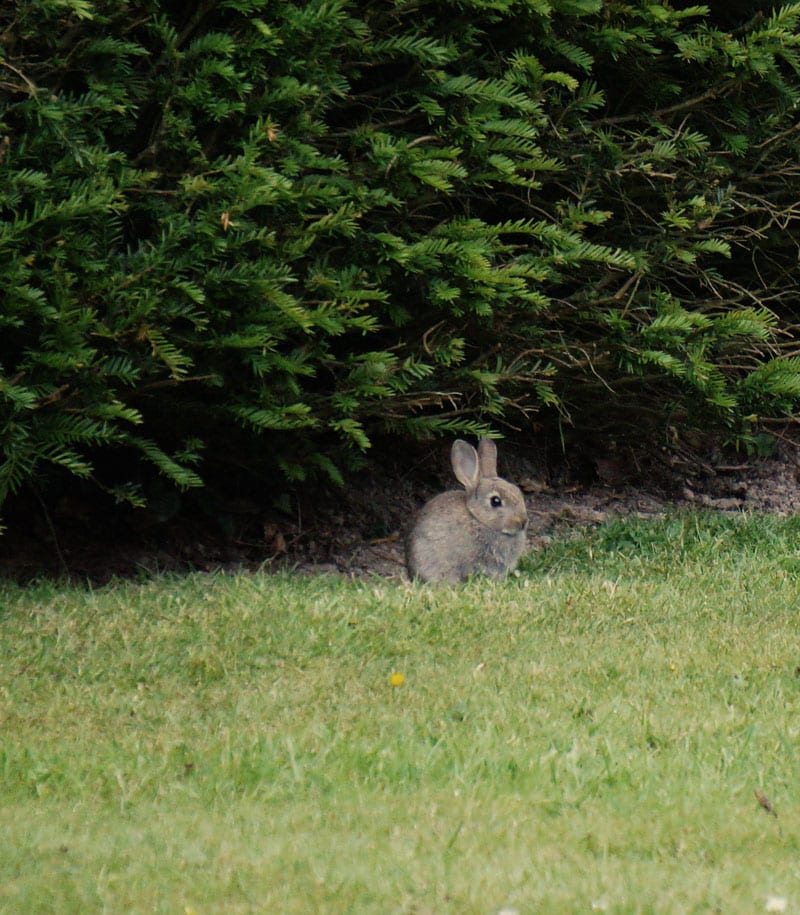 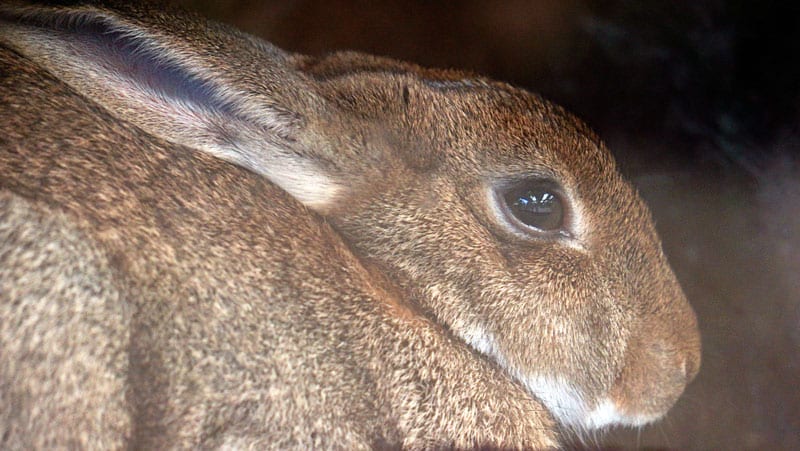 Although rabbits are now prolific and considered by many as pests, they’re still wondrous for children to live alongside and learn about in their natural habitat. And my daughter thinks they’re the cutest of all British wildlife!

For another British wildlife spotter adventure with kids read my post on fallow deer.