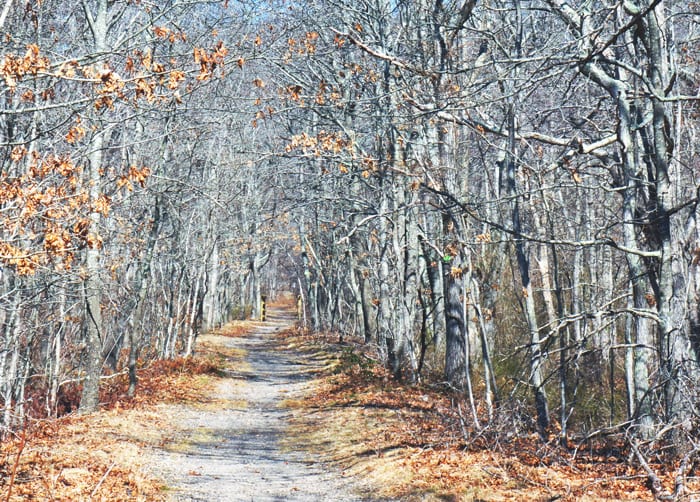 Stretching across the Southfork in the Hamptons is a series of coastal plain ponds, marshes and wetlands known as the Long Pond Greenbelt. My children and I went for a nature adventure following the trails along its northern loop starting in Sag Harbor.

Over 600 acres have been protected as this ecosystem, according to the Nature Conservancy, is home to some of the highest concentrations of rare species and nature communities in all of New York State. 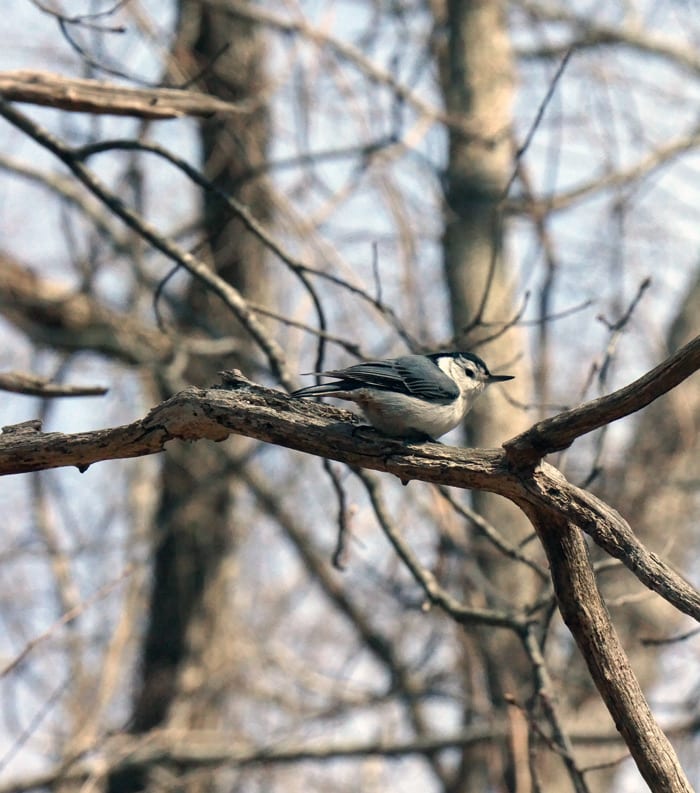 We glimpsed a white-breasted Nuthatch flitting among the still bare branches as we began our walk. Over a 100 species of birds were sighted in the greenbelt during one four-year study. 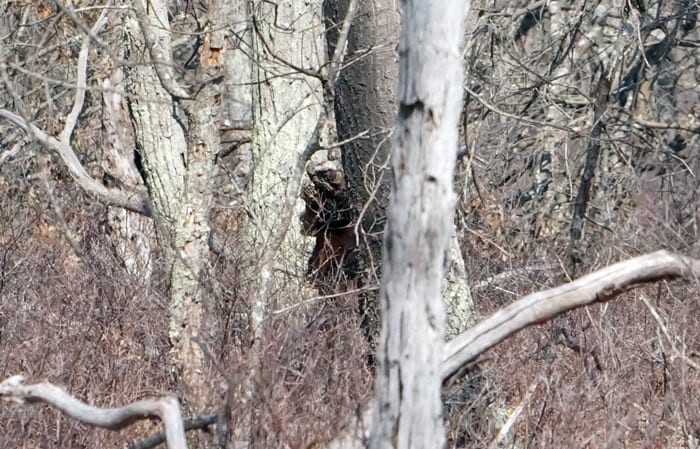 From 1880 to 1939 trains use to pass through the woods as they made the journey between Sag Harbor and Bridgehampton. Now we used the Old Railway Trail to lead us on our nature walk.  Soon the woods and flora will be turning green and flowering but in early Spring it was still filled with old leaves and barren shrubs. (My camera caught an interesting shadow lurking among the trees above – but I haven’t been able to figure out what exactly it was…) 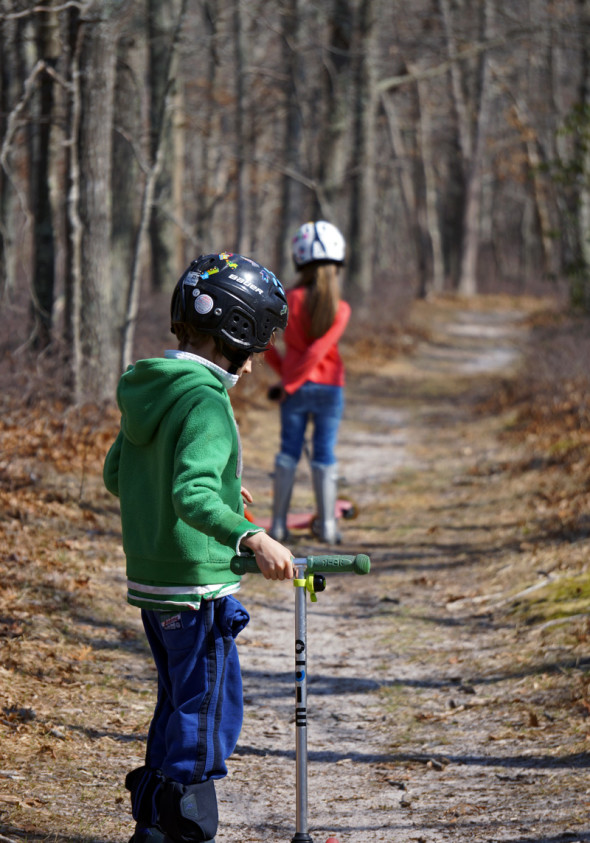 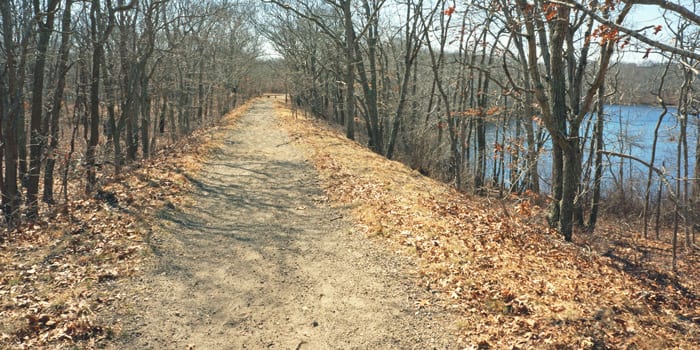 We kept on the Old Railway trail and ambled past Little Long Pond. Near its southern edge we found a path leading to a small boat launch site. 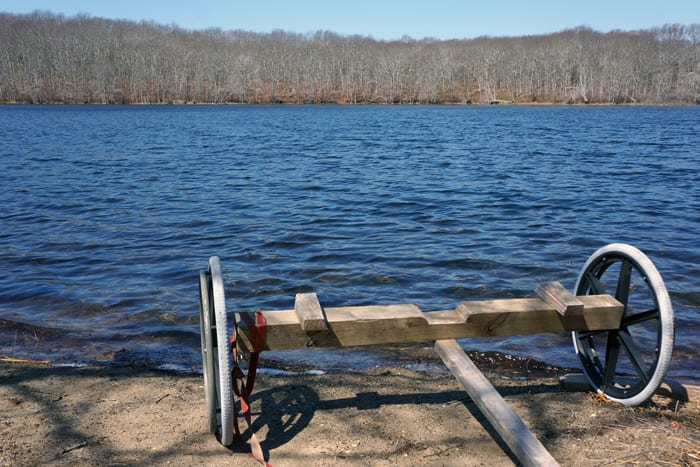 We returned to the Old Railway Trail and then veered left onto Sprig Tree Path taking us to Long Pond. 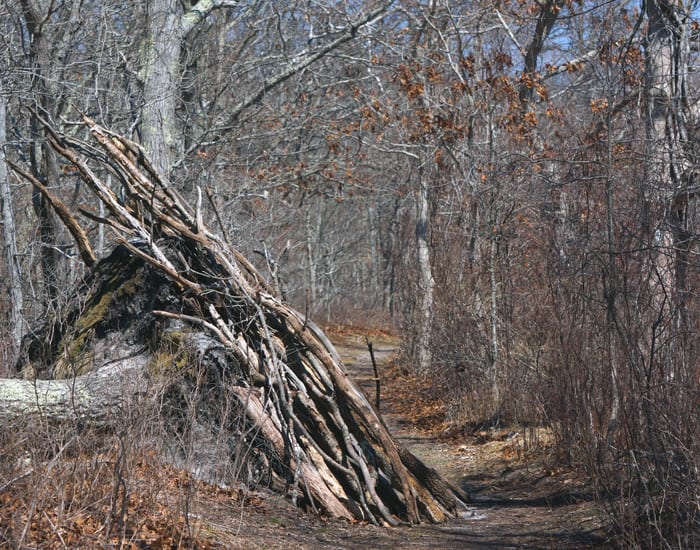 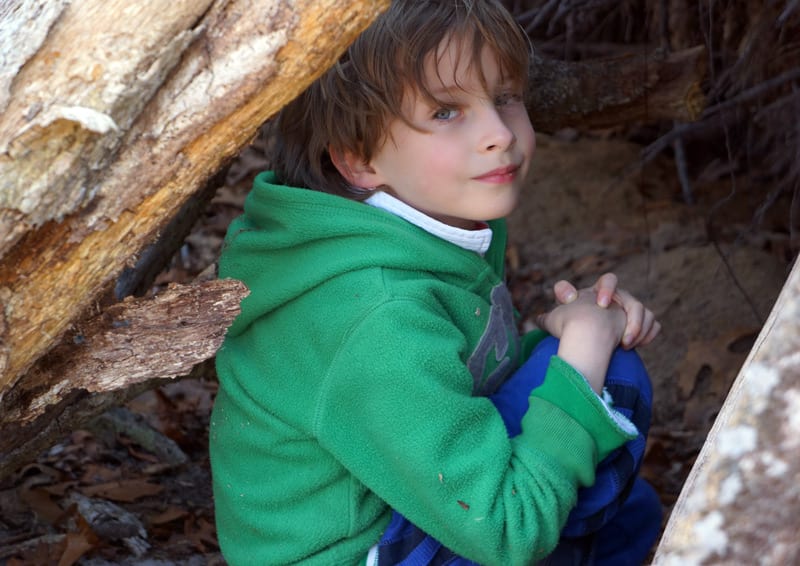 A den hideout was a welcome surprise along our route. 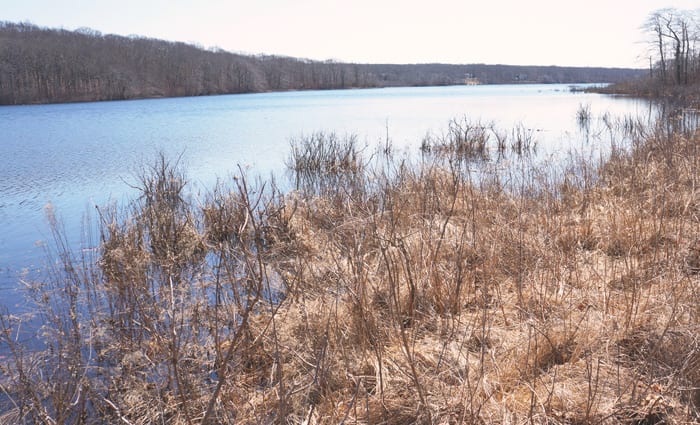 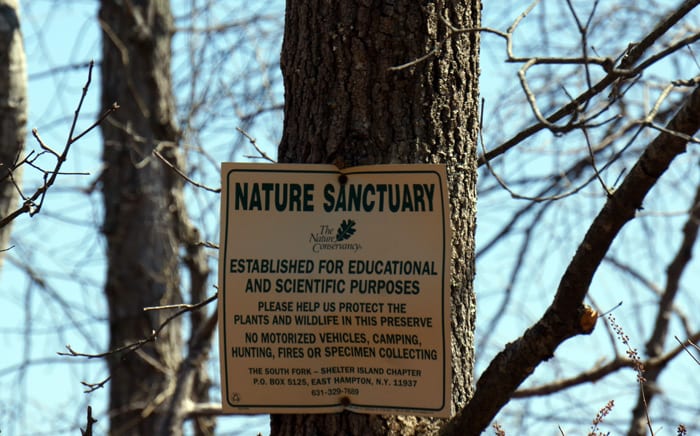 And then we were staring at Long Pond. It’s a half a mile long pond. Swans cruised slowly across its waters. 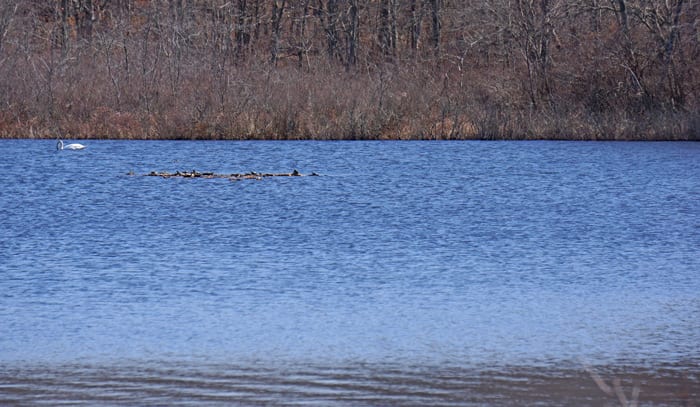 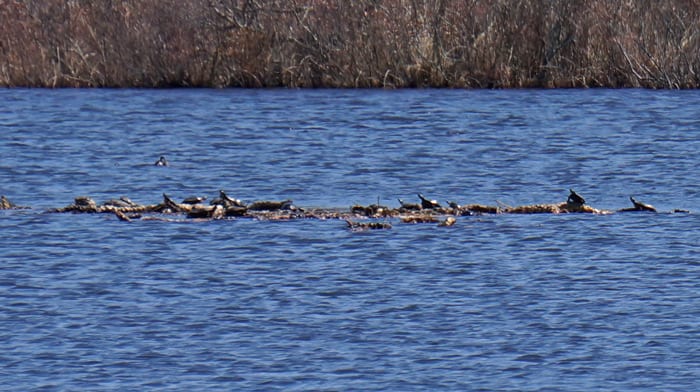 While nearby them were basking turtles. 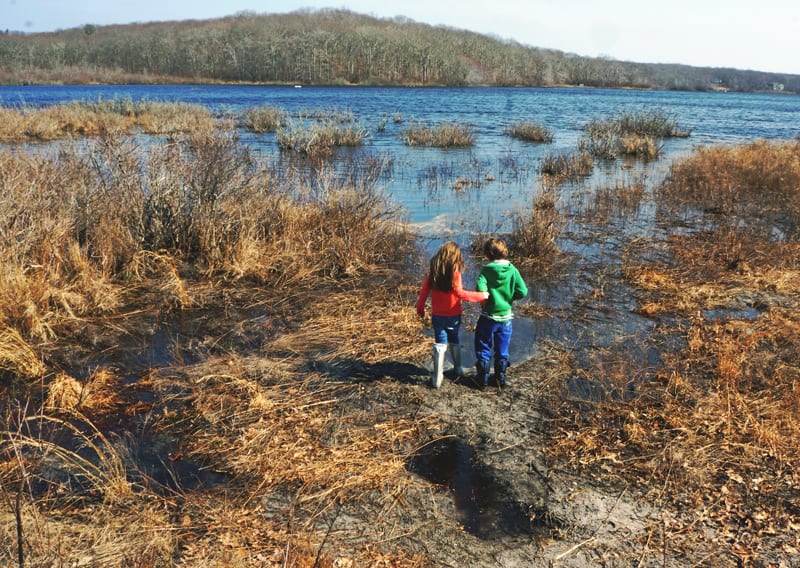 The water was shallow enough to step among the reeds on the northern edge. Long Pond’s water levels fluctuate according to the rainfall and its effect on the water table. Soon water lilies will be spreading and flowering all around here. 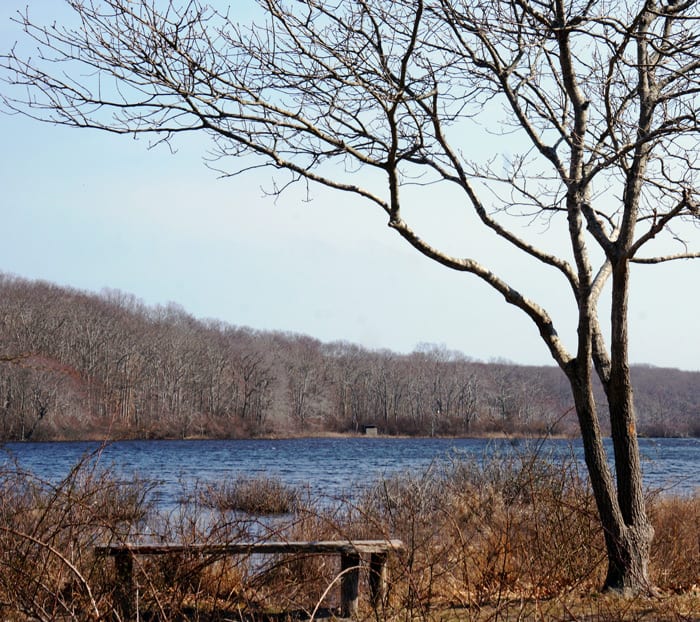 On the northern edge was a bench with a view. Perfect for a rest and quiet thoughts. 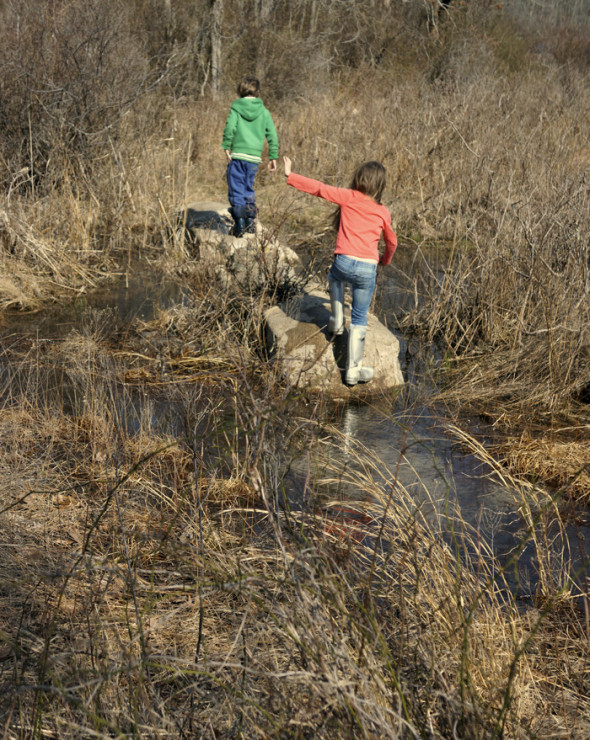 Near it was a concrete culvert marking the edge between Long Pond and Ligonee Creek. Perfect for a climb and loud laughter. 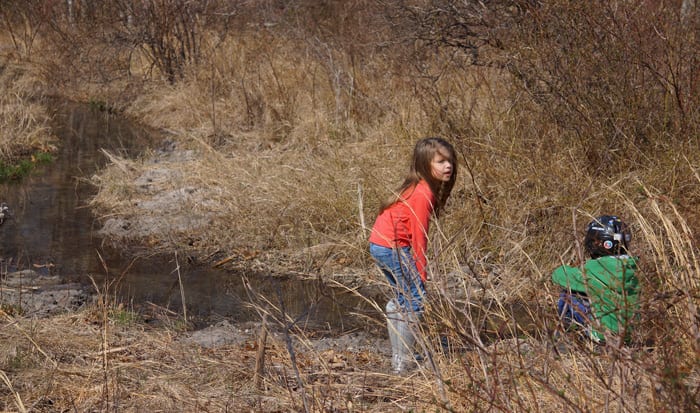 I loved watching my two exploring the creek. The joys of just being kids splashing and having fun outdoors in nature’s playground.

And this preserve is right in the middle of the Hamptons in Long Island. The greenbelt contains ponds and wetlands right from the north of the Southfork in Sag Harbor all the way south to Sagaponack. We’ve visited Round Pond in the Fall and fed the swans in Otter Pond in the winter. 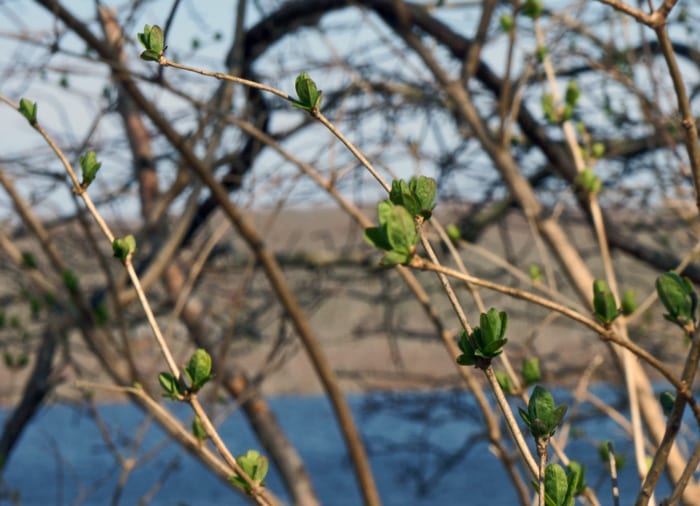 I can’t wait to take my kids back soon when the land, plants and pond reawakens and we can have new nature adventures here. When dragonflies hide in the lily pads from Tree Swallows. And we’ll search for a wild orchid called Pink Lady’s Slipper and a carnivorous sundew. And pick blueberries growing near the water’s edge. And look out for basking turtles and swimming muskrats.

In the meanwhile the off season has meant that I can go for a walk and run on the trails of the Long Pond Greenbelt in the morning without encountering anyone except wild birds in the branches above and wild fowl in the waters alongside me.

Park on the turnpike as you enter Sag Harbor next to the playground in Mashashimuet Park.  Then walk past the private drive and you’ll see a dirt track leading to the entrance of the Long Pond Greenbelt. There’s now a board nearby with a map of the trails. In the image above you can see the entrance on the right. Following the Old Railway Trail cross the first path intersection – the trail on the left leads to Round Pound – and then take the next path on the left to Long Pond. Sprig Tree Path continues alongside Long Pond and then loops back onto the Old Railway Trail. Turn right onto Old Railway Trail and it will lead you past Little Long Pond and then back to Sag Harbor. It’s roughly a 3 mile hike. The Old Railway Trail also leads to the Long Pond Greenbelt Southern Trails ending up in Bridgehampton. Maps of  the South and North trails are available online by the Southampton Trails Preservation Society.

If you’re looking for simple outdoors nature adventures for kids in the Hamptons then head to the trails in the Long Pond Greenbelt.