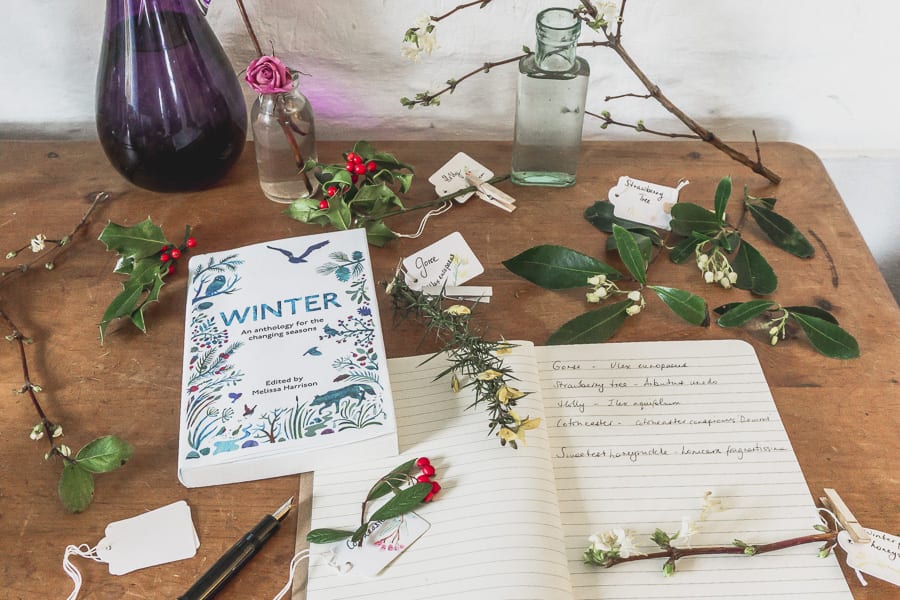 “Determined that this diary should start off with a bit of flourish, I sallied forth on this fine winter’s day to see what I could find in bloom. The answer was, quite a lot.”  Richard Adams, A Nature Diary from Winter An anthology for the changing seasons“

It’s easy to assume that all the blooms and colour have disappeared when the cold winter months begin, but if you look there are many surprises still in the hedgerows, edge of fields, woodlands and even in the garden. So I continue keeping a winter nature diary. Quite a few entries in the book Winter: An Anthology for the Changing Seasons mention different nature findings such as gorse and holly berries displayed on my botanical desk. By the way this is a rather lovely series of books – one for each season – published by The Wildlife Trusts. I was given all four as a present.

As I explained in my previous post, I have been keeping a visual nature diary of the changing seasons where I live in West Sussex. Throughout the year I record, study and take photos of wild flowers, nature findings and what’s growing in our garden at what I call my botanical desk. Of course I should have been posting these monthly – which I hopefully will do in the future – but for the moment I’m creating my own little anthology with pictures I’ve taken of my desk during each season.

More often than not I have some of my nature books on my desk. My little studio office is filled with my growing collection. Many I order but many I find in second hand bookshops. I’ve included some notes about them (as well as my Amazon partnership links) but plan to write some fuller reviews. It’s a wild dream of mine to have a huge studio filled with shelves displaying my nature collections and floor to ceiling bookshelves with my botanical books….sigh… 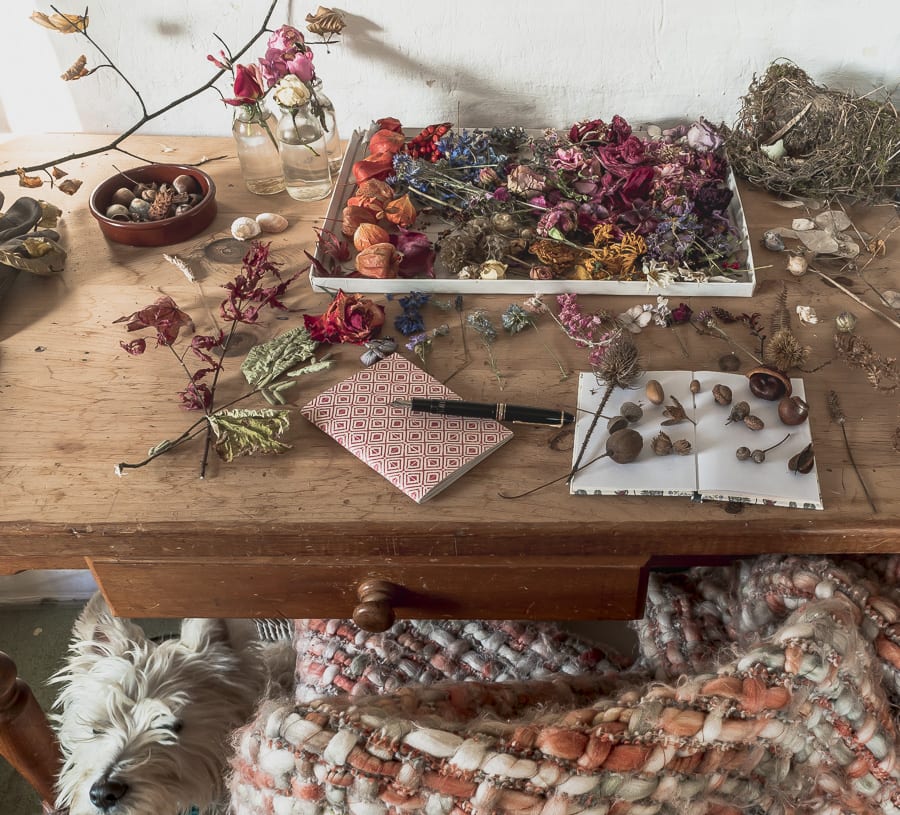 After the leaves fall suddenly you can see in the hedgerows and tree branches so many birds nests built during earlier seasons. The nest here on my desk is just one of few I discovered hidden behind our climbing hydrangea. On walks in the woods the ground is littered with acorns and nuts from the trees. I also constantly dry flowers picked from my garden.  I try to keep them sorted in boxes but often they sit in a jumbled mess in trays on my window ledge until I have some free quiet moments to organise them. Some I keep just as a record while others I use in wreaths or dried arrangements in our home. Our dog can usually be found napping under my desk waiting for me to take him for a walk in the woods. 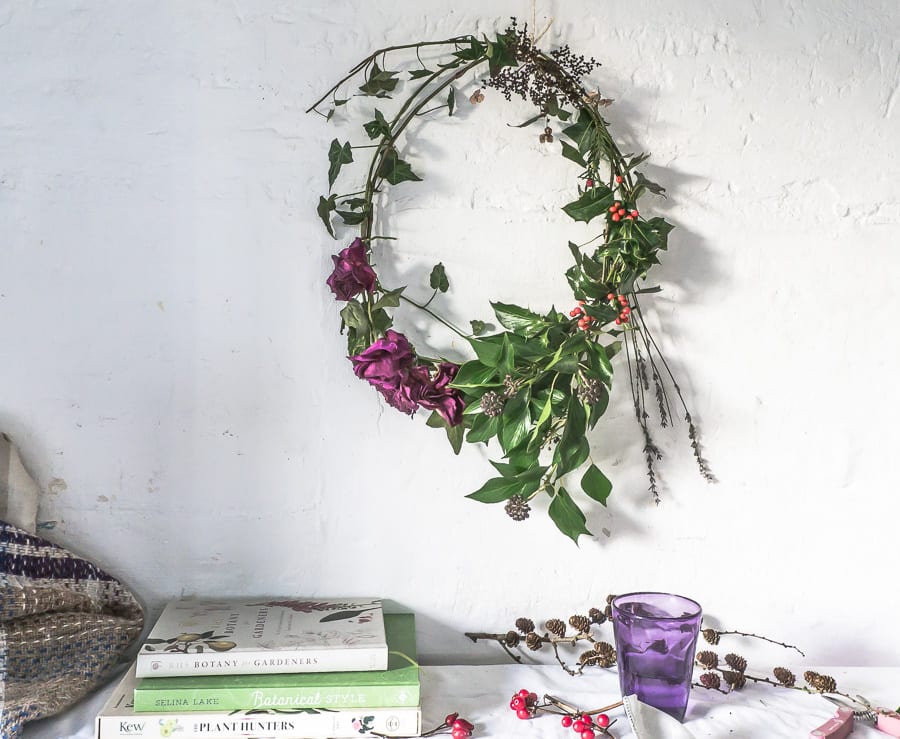 And here’s a wreath I made with dried roses, lavender and climbing hydrangea as well as freshly picked ivy and holly.  Three favourite books on my desk are RHS Botany for Gardeners: The Art and Science of Gardening Explained and Explored, Botanical Style by Selina Lake and The Plant Hunters: The Adventures of the World’s Greatest Botanical Explorers. They all have a botanical theme – learning and understanding botany, how to decorate your home with nature and florals, and how some of these amazing plants now in our gardens were discovered by early naturalists and explorers. I’ve also written before about The Plant Hunters. 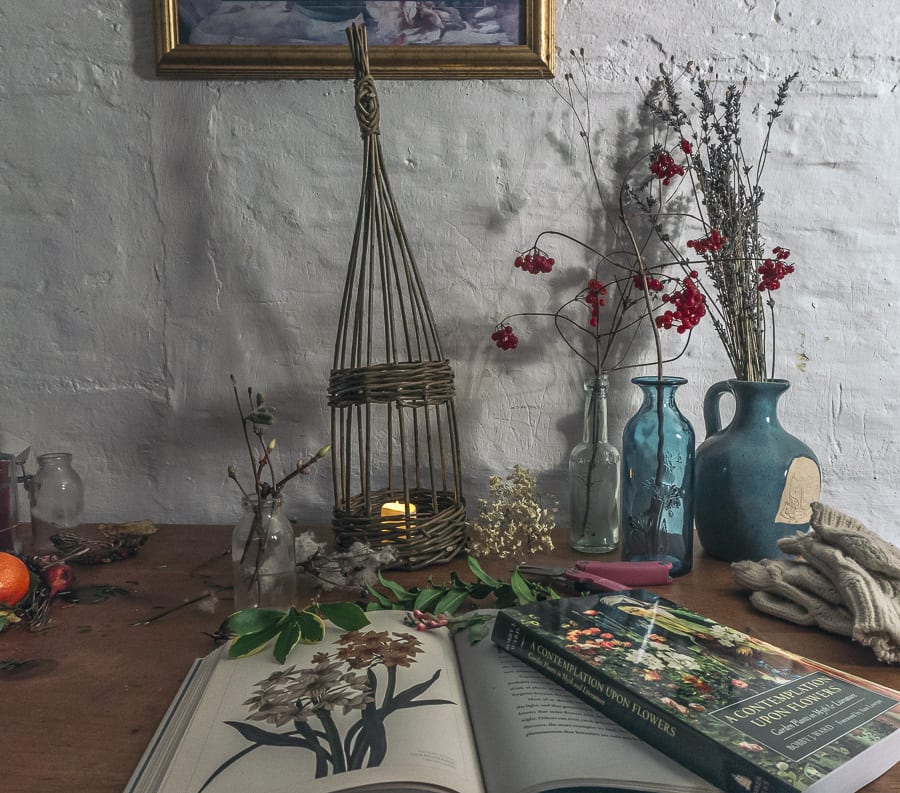 “The synchronisation of plants with seasonal and daily time is known as photoperiodism…In fact, much of what we see in the natural world is happening because plants and animals are able to detect the varying lengths of day or night…Often it is the length of darkness, rather than that of daylight, that plants are responding to.” From Botany for Gardeners

The shortest day of the year is on the Winter Solstice – usually around 21st or 22nd December in the Northern hemisphere. Botanists certainly like their special words. I learnt about photoperiodism from my book RHS Botany for Gardeners in the chapter on ‘Botany and the Senses’ opened here on my desk. It can be a struggle taking photos for my winter nature diary when the daylight hours are so short. Rather proud that I also made the wicker candle lamp at a workshop I attended last year.

The other book on my desk is A Contemplation Upon Flowers by Bobby J. Ward which has wonderful quotes and tales of garden plants in myth and literature. 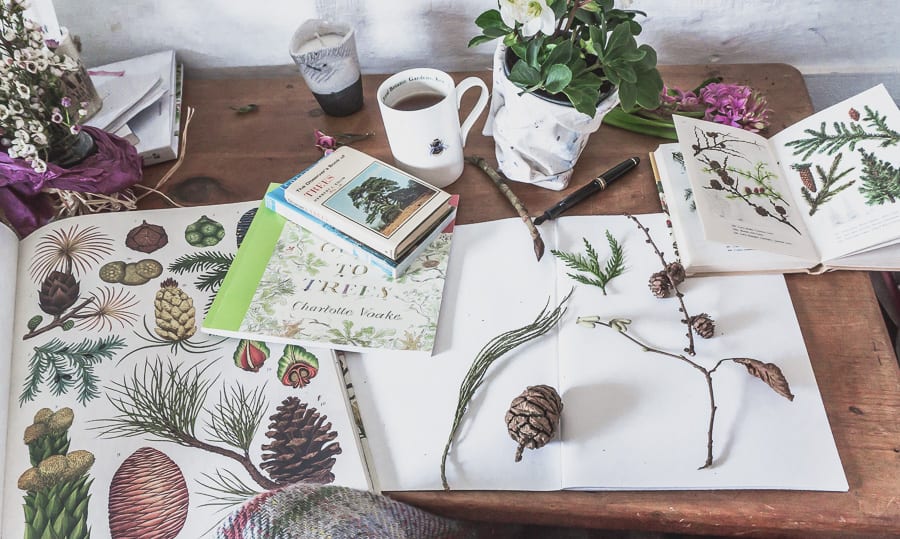 In the late nineteenth and early twentieth centuries it became very trendy for landowners to plant seeds from some of the mammoth conifers discovered by plant hunters. The ultimate status symbol was to have a giant sequoia – also known as the giant redwood – on one’s estate.  Almost once or twice a month, I go on walks, usually with my twins, at nearby Wakehurst – Kew Gardens country estate – which has a pinetum. The Elizabeth mansion at Wakehurst now sits in the shadows of giant sequoias. One of them is considered Britain’s largest Christmas tree as it’s decorated and lit up every year for their Glow Wild festival. (My twins are going to be furious with me that I didn’t buy tickets in time this year!) Close friends of ours have a giant sequoia as well as a Douglas fir tree planted in the late 1890s next to their house. I often wonder how tall all these giant trees next to old English mansions will be in a few more centuries!

Even in the woodlands around us there are quite a few impressive conifers planted during the craze for ‘big trees.’  Slowly I’m learning to identify some of them by collecting their cones. Open on the left side of my table above is a page of botanical cone art by Katie Scott from her book Botanicum: Welcome to the Museum. I’m crazy about botanical art so adore this book.

A great book on trees is Charlotte Voake’s book A Little Guide to Trees published by the Eden Project – “In winter…Most conifers are evergreen, which means they keep their thin needle…Compare this to the larch, a conifer which loses its leaves.” On the top right hand page of the notebook as well as the left page of Garden Shrubs and Trees by Eigil Kiaer are larch cones. I often collect them in the winter from the woodlands surrounding our valley. Their little cones remind me of roses. 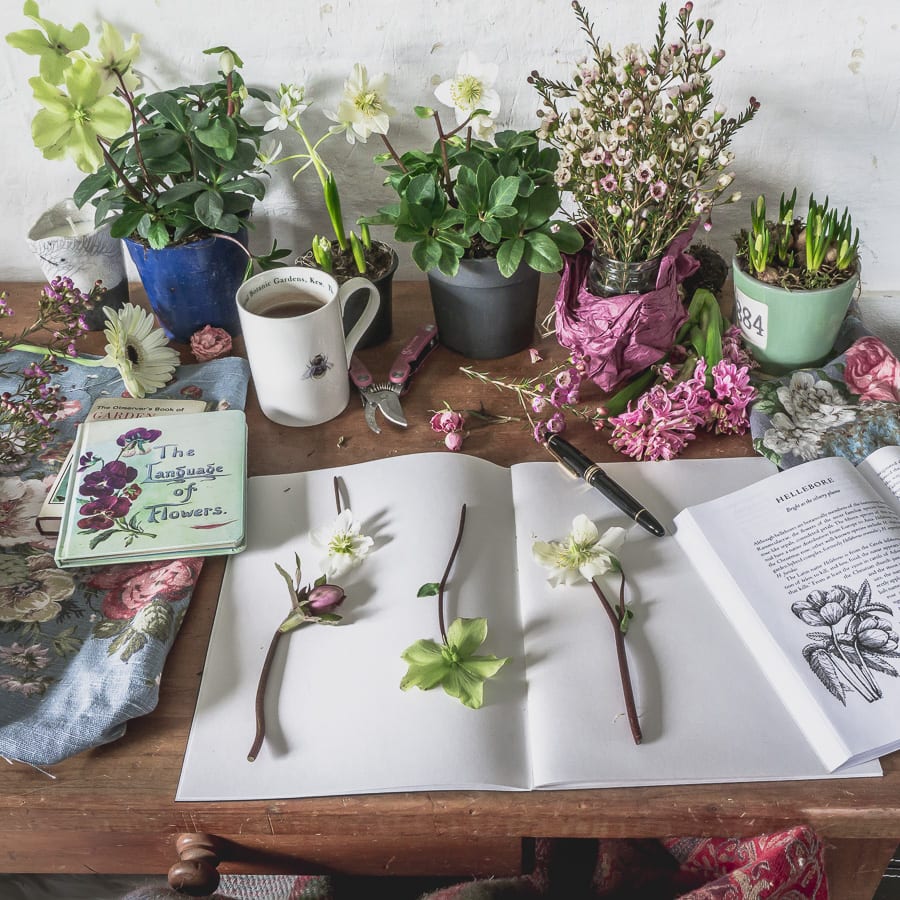 The garden starts transforming in late January.  Various types of hellebores start blooming in my garden – also often called the Christmas rose or Lenten rose. In The Tenant of Wildfell Hall (1848) by Anne Bronte, the heroine says:

“This rose is not so fragrant as a summer flower, but it has stood through hardships none of them could bear: the cold rain of winter has sufficed to nourish it, and its faint sun to warm it; the bleak winds have not blanched it, or broken its stem, and the keen frost has not blighted it.”

This story and quote I found in A Contemplation Upon Flowers which I mentioned above previously.

The Victorians and Edwardians gave meanings and sentiments to flowers. Often small tusssie-mussies (such a fabulous word for nosegays) or bouquet would be a way of passing secret messages. I would have been rather worried if I’d been given hellebores as their meaning was ‘scandal’ and ‘calumny’ according to The Language of Flowers written in 1913.  I’ve written about this fascinating little book here in another winter post. 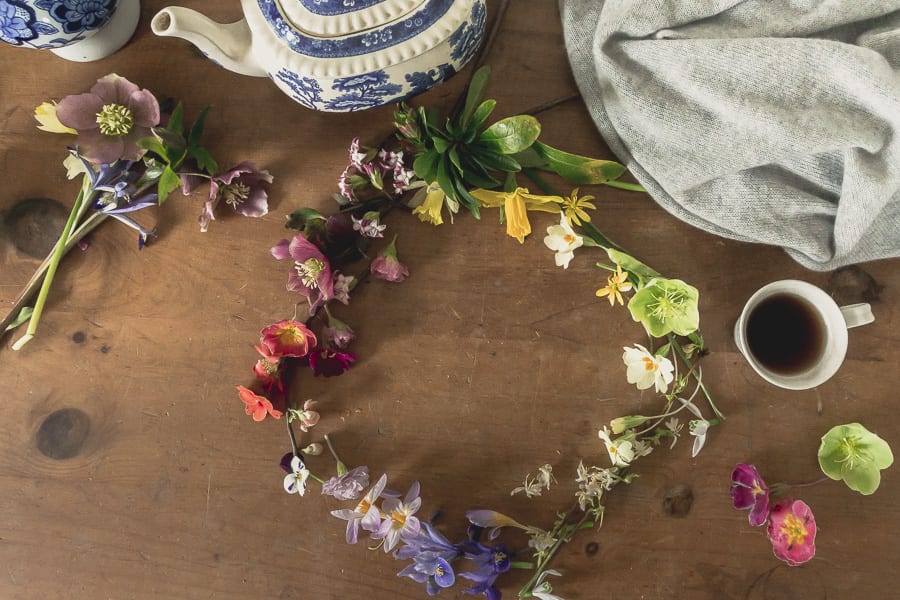 And then the garden wakes up. A rainbow of colour spreads across the flower beds as tiny bulbs all come to life such as in this ring of flowers on my desk. The first daffodils join in with the primroses, crocuses and irises as we wait for the spring flower dance to begin.

For simplicity’s sake I’ve been dividing my botanical desk posts into meteorological seasons which means Winter begins on 01 December and includes the months December, January and February. According to the astronomical calendar, winter actually begins during the winter solstice which is around 22 December in the Northern Hemisphere. My botanical desk – Autumn can be found here. I also will try and catch up soon with my Spring and Summer nature diaries as part of this series.

In my Nature Diary posts you can find out more on my recording of nature and gardens.