You are here: Home / Wild Kids / Learning how to cast animal tracks 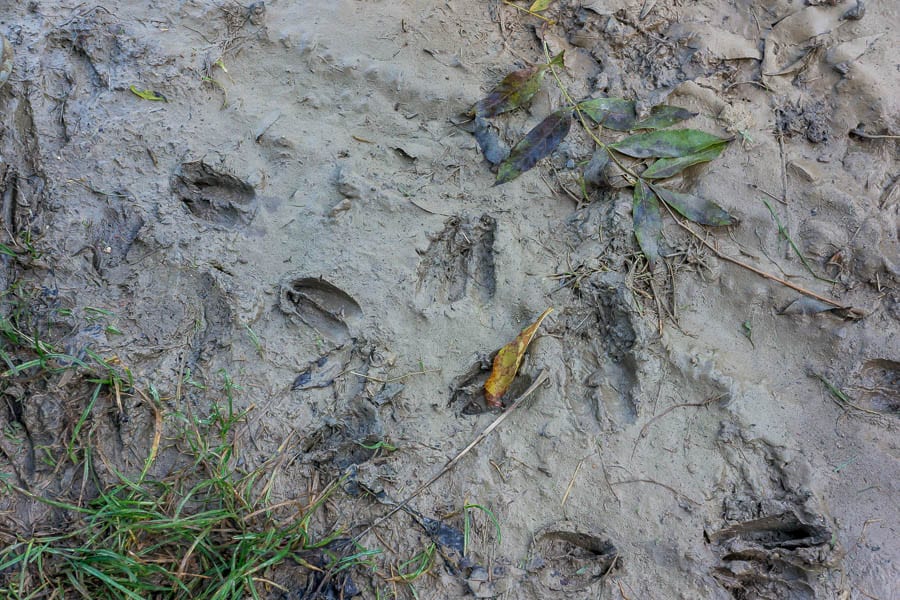 On nature walks we constantly spot animal footprints and can see where they roam when we’re not about. We’ve also been on a nature detective hunt following badger trails.  Finally we decided it was time to learn how to make casts of animal tracks so we could find out who had been sharing those same trails with us. Many animals only appear at dusk, dawn or during the night so the only traces of them are the footprints they leave behind.

We went on an expedition to search for a variety of tracks near our house and then make casts of them. 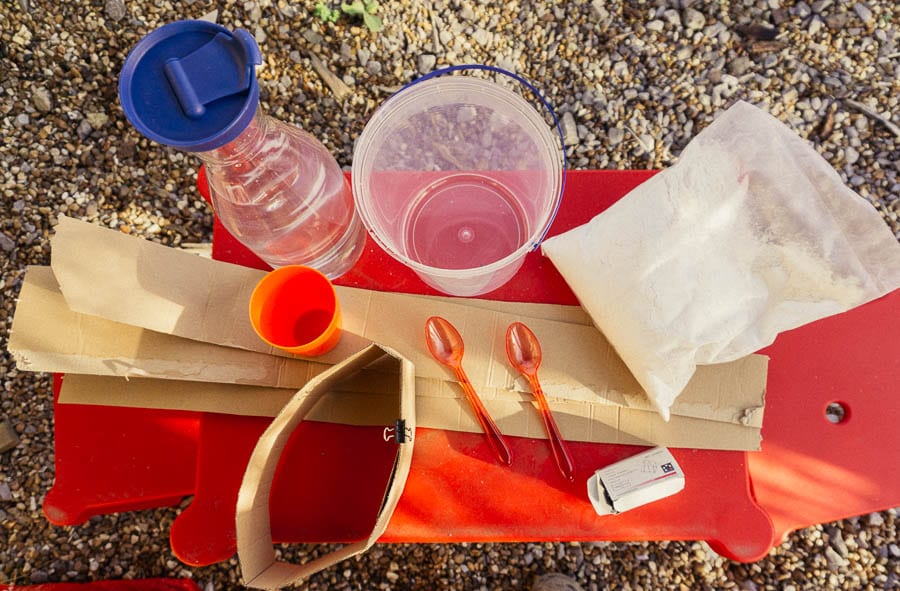 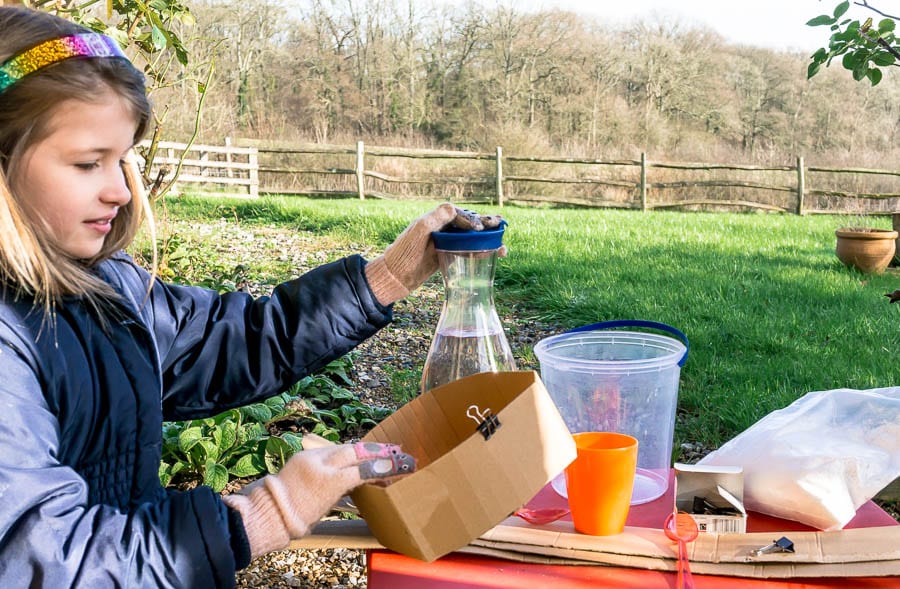 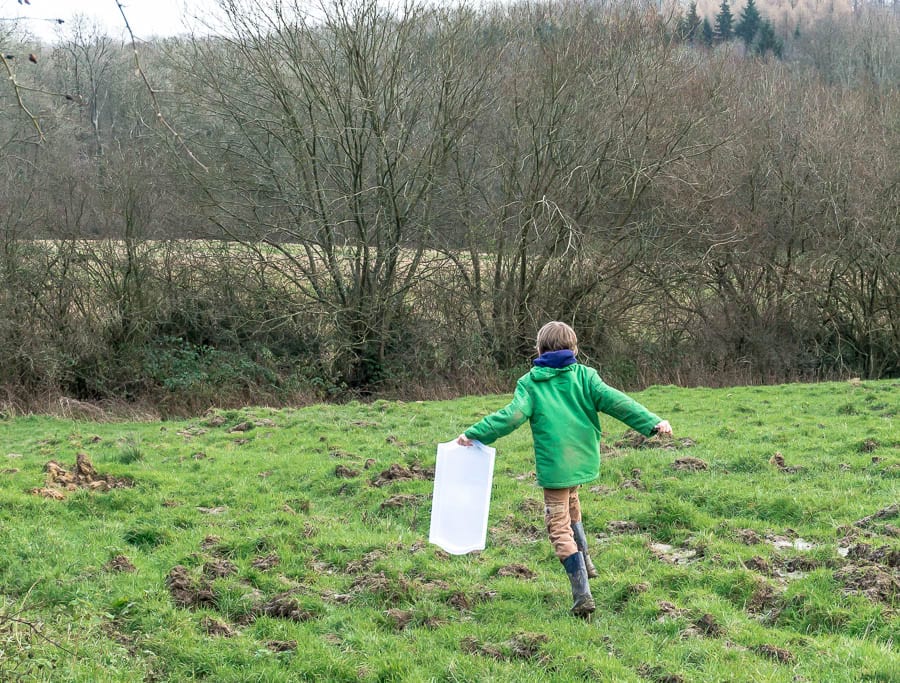 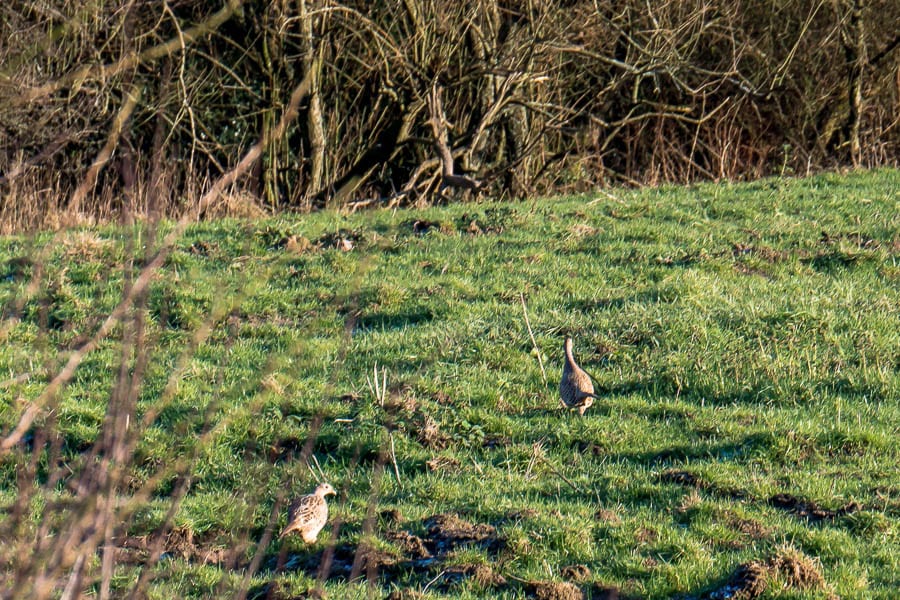 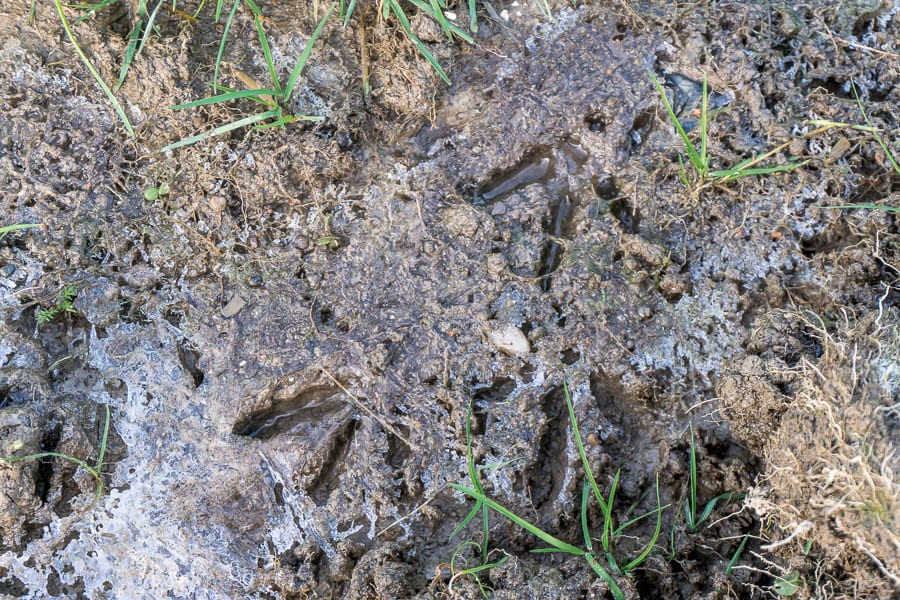 Off we went to the edge of a nearby meadow which was muddy and a frequent route of our local wildlife. Often deer pass right through this area on their way in and out of the woods.  Recently there have been lots of pheasants around. 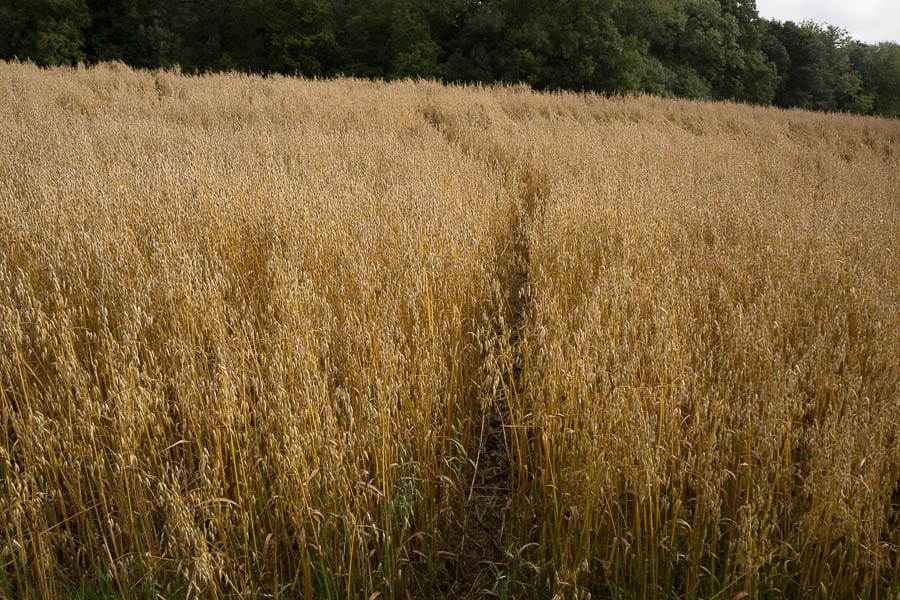 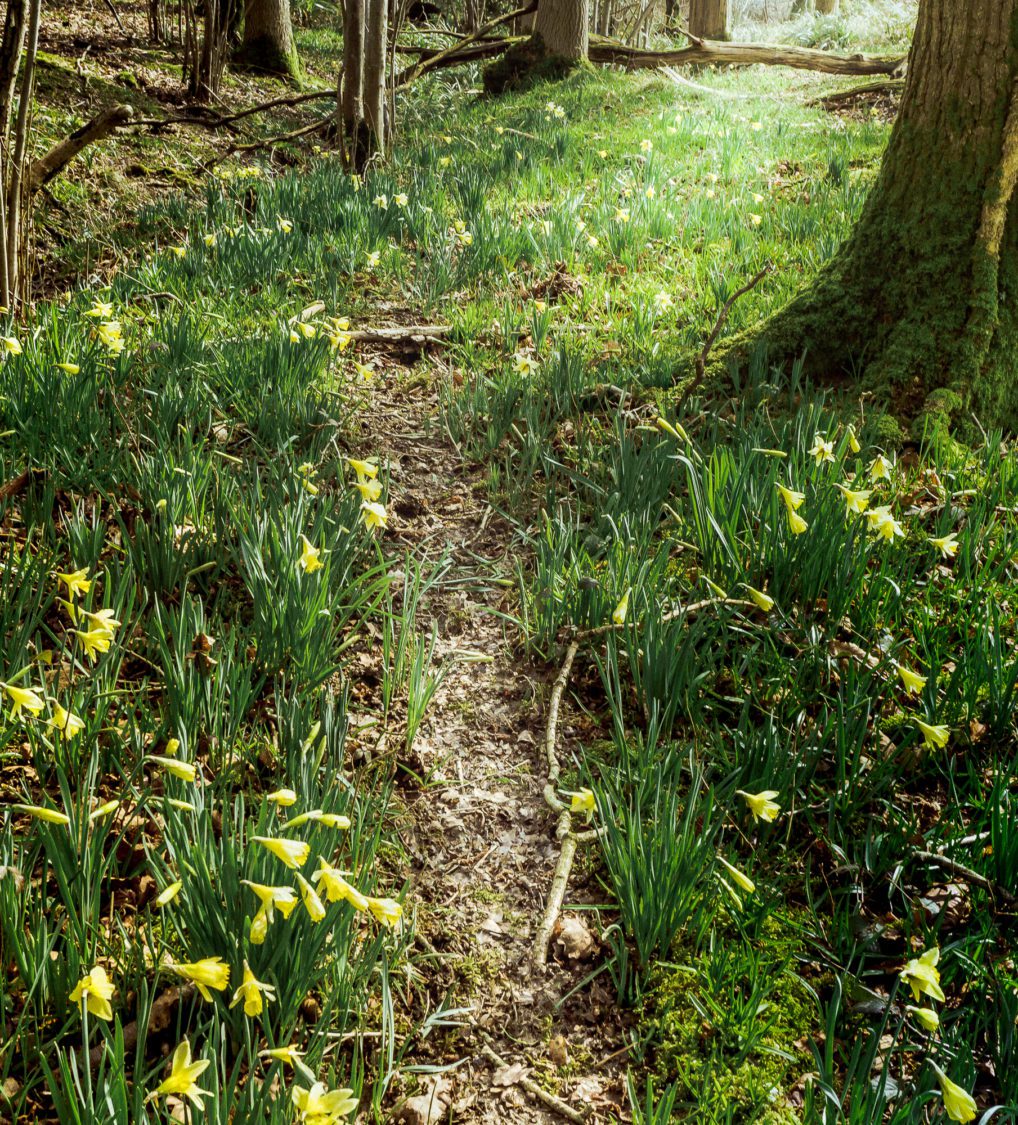 We initially chose two different animal tracks to cast.  The first was a clear imprint from a pheasant in the mud.  Nearby we found small deer tracks. 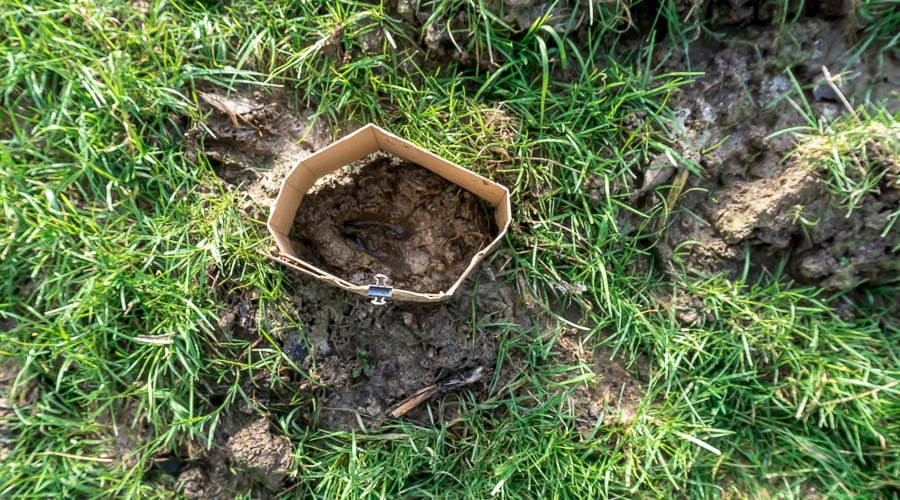 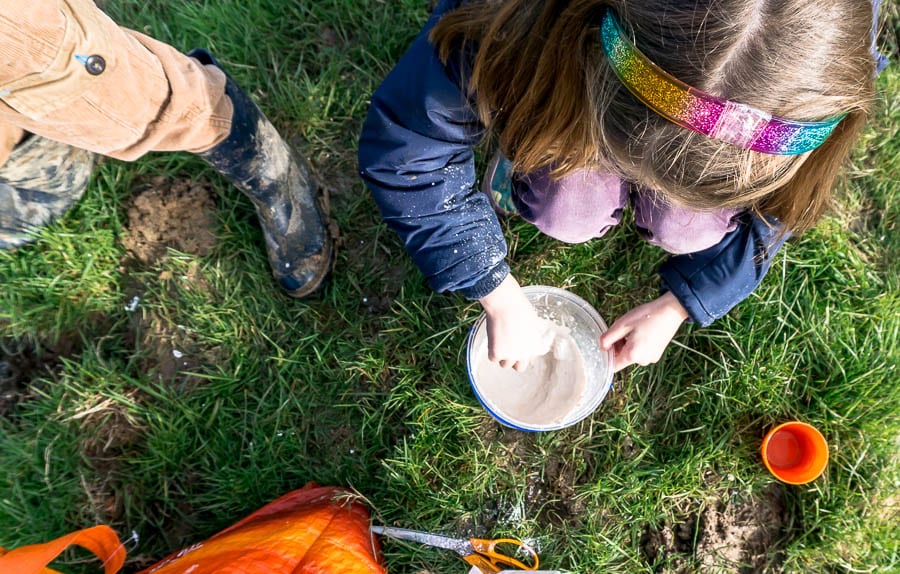 Mix Plaster of Paris and water then fill ring 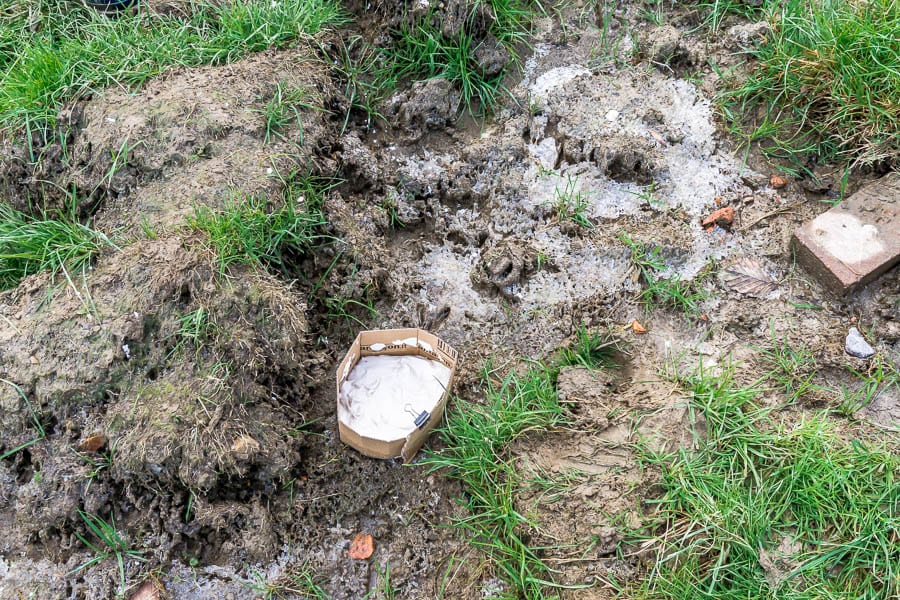 Now we needed to wait for the plaster to set.  This can take from 15 to 45 minutes depending on the weather. 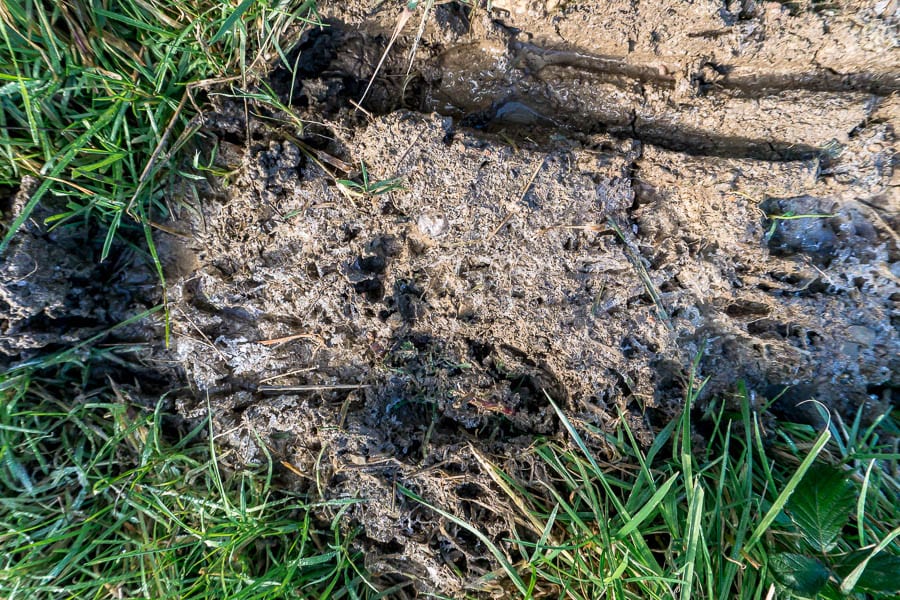 Since we had some plaster of Paris left over, Luce and Theo wanted to find another animal track to cast. Near our garden fence we found some tracks in the muddy grass. Luce and Theo were excited as maybe it was a fox footprint? We’d seen a fox hunting in this patch and no dogs ever came here. But it looked like an animal with long claws…My kids would have to be wildlife detectives by identifying the animal from the final cast! 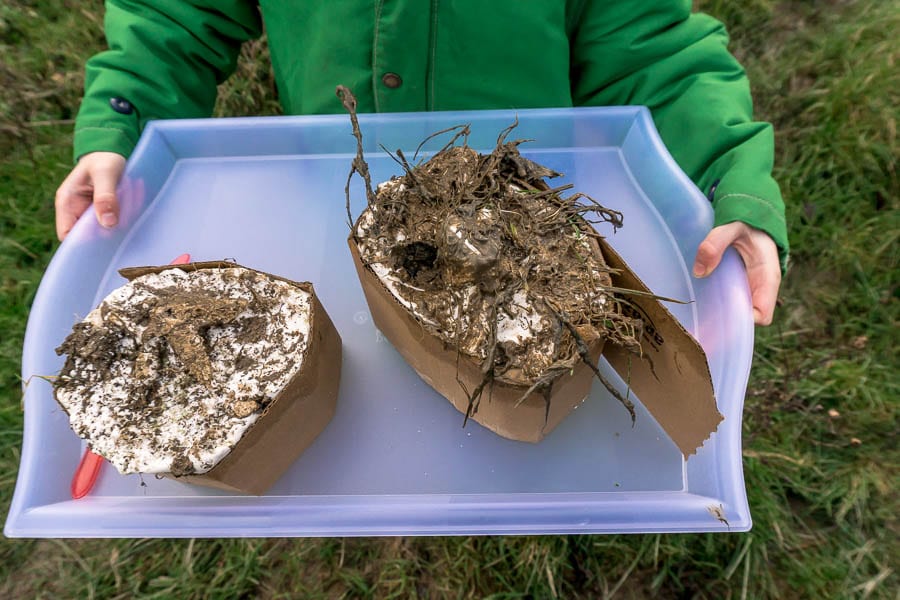 As the tracks were all so close to our home we fetched a plastic tray to bring them back on although we had originally brought a large bag to carry them in. Next time we go in the woods to cast tracks I’ll also bring along some old newspaper to wrap the casts before putting them in a bag. We first checked that the plaster was set before lifting the rings up.

Back home we left the moulds on the tray – still inside the rings – to harden and set completely. This can take at least 24 hours. 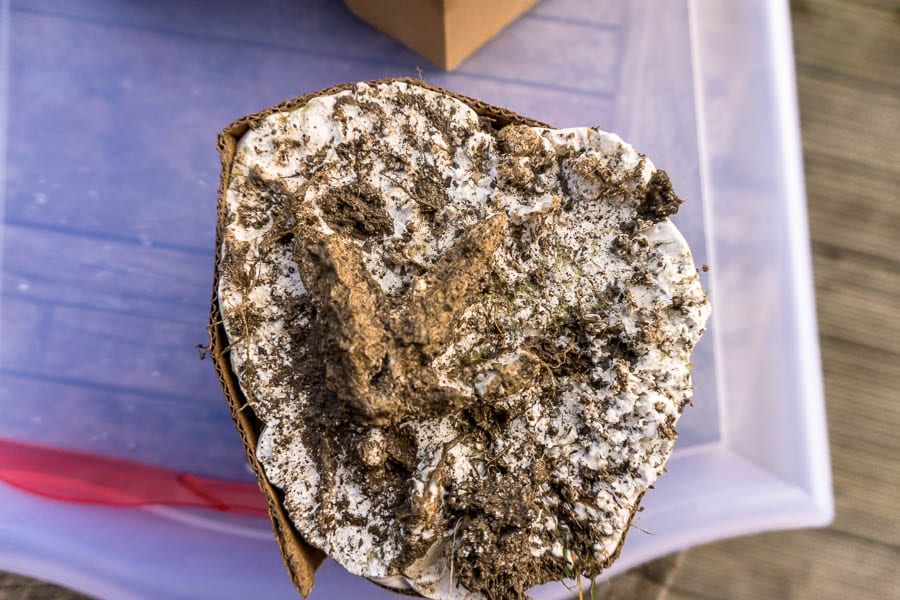 Dry out and clean

Once the moulds were dry and hardened we gave them a gentle scrub to remove any remaining dirt and debris. I’m going to save some old toothbrushes for our next casting session to help clean off any remaining mud.

So far we’ve also painted one of the footprints to help measure and identify the animal track. Luce and Theo are still trying to come to a compromise on who gets to paint the pheasant or the deer impressions. 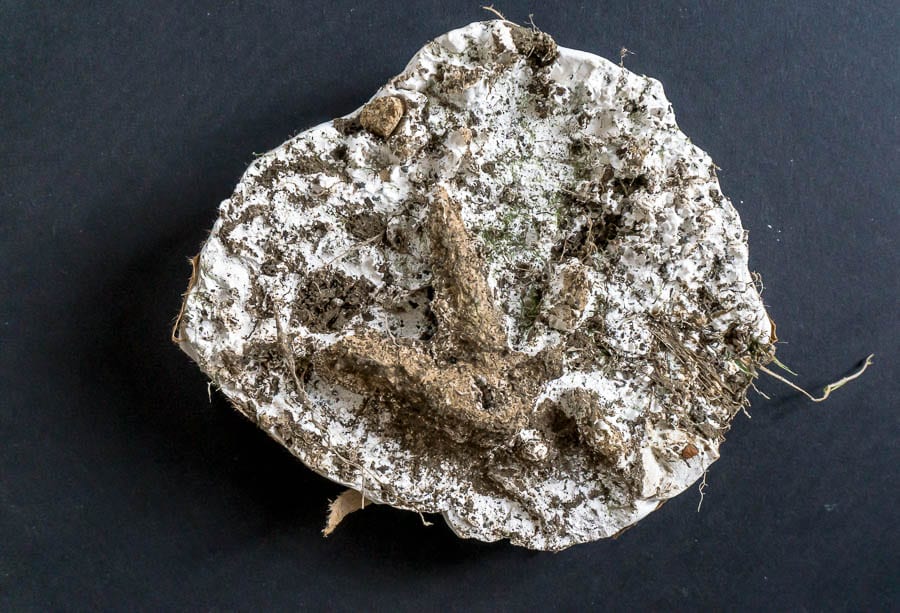 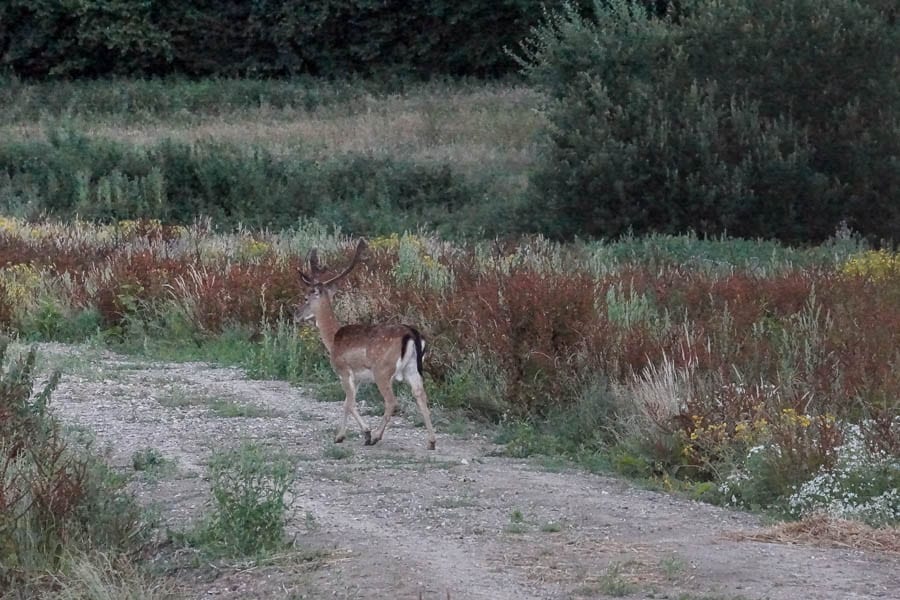 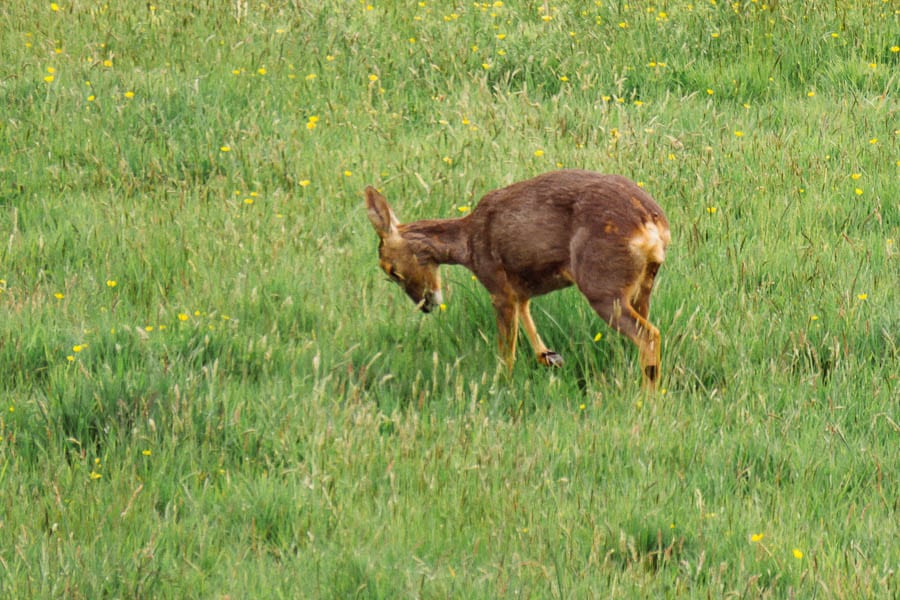 On purpose we had chosen small deer tracks to cast. Herds of Fallow deer often cross this field but their hooves leave much larger imprints in the mud. There are also Roe deer and Muntjac deer where we live. 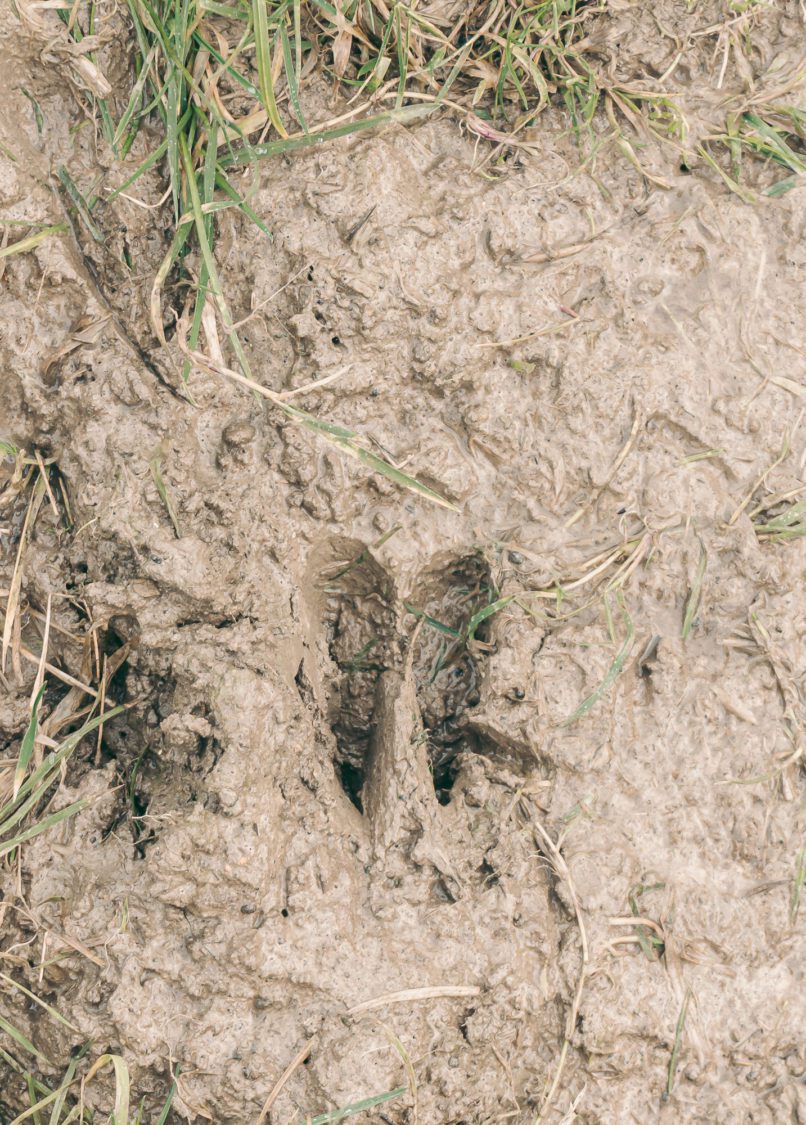 We measured the animal track in the mould and it was 4.5 cms long and 3 cms wide. We had made a cast of a Roe deer track! Roe deer tracks are narrower and pointed in the ends with an average adult length of 4-5 cms and width of 3-4 cms. Muntjac tracks are around 2.5 cms long while Fallow deer are about 6 cms long. 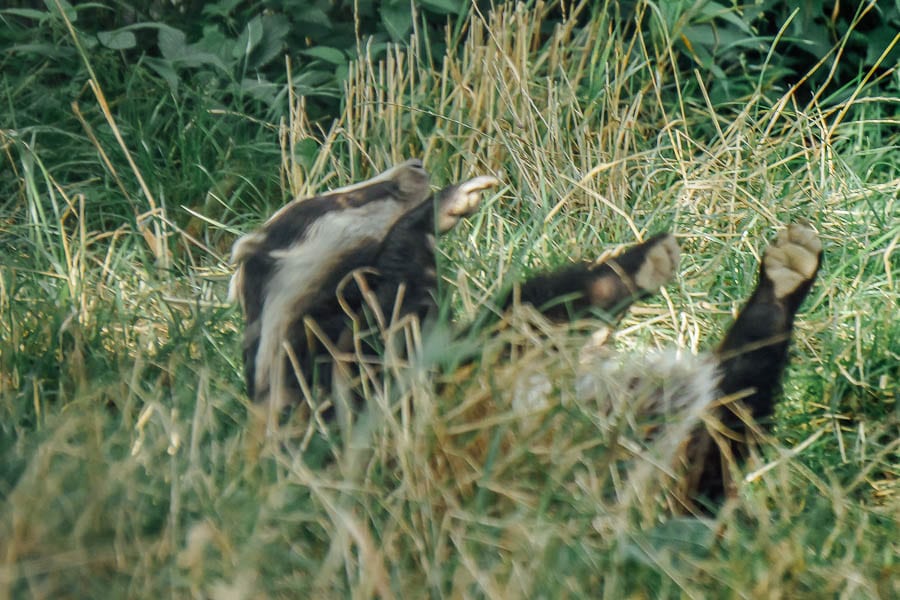 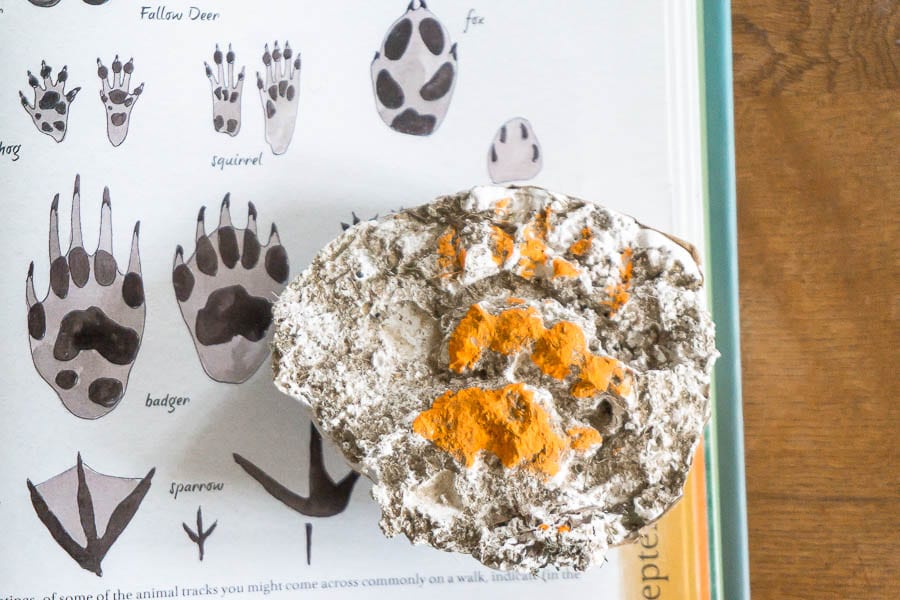 Once we had made the cast and looked at the raised impression we quickly learnt that our last animal track was definitely not a fox. It looks like we had found a badger by the shape of the tracks!

I’d been told that badgers frequent this patch of meadow next to our garden and we finally had proof. In my wonderful book An Illustrated Country Year there’s a page illustrating animal tracks for us to compare. As you can see above, I also found a photo of a badger I had taken in the past with its paws up in the air.

One lesson we learnt when the moulds were ready was that we should have spent some more time brushing away the debris around the animal tracks before enclosing them with cardboard rings. However it was a very chilly winter day and small hands were freezing. After all practice makes perfect.

It was also healthy and good for my twins to play in mud as I explain the benefits here.

The bottom line was that it was easy and fun for my kids learning how to make animal tracks. 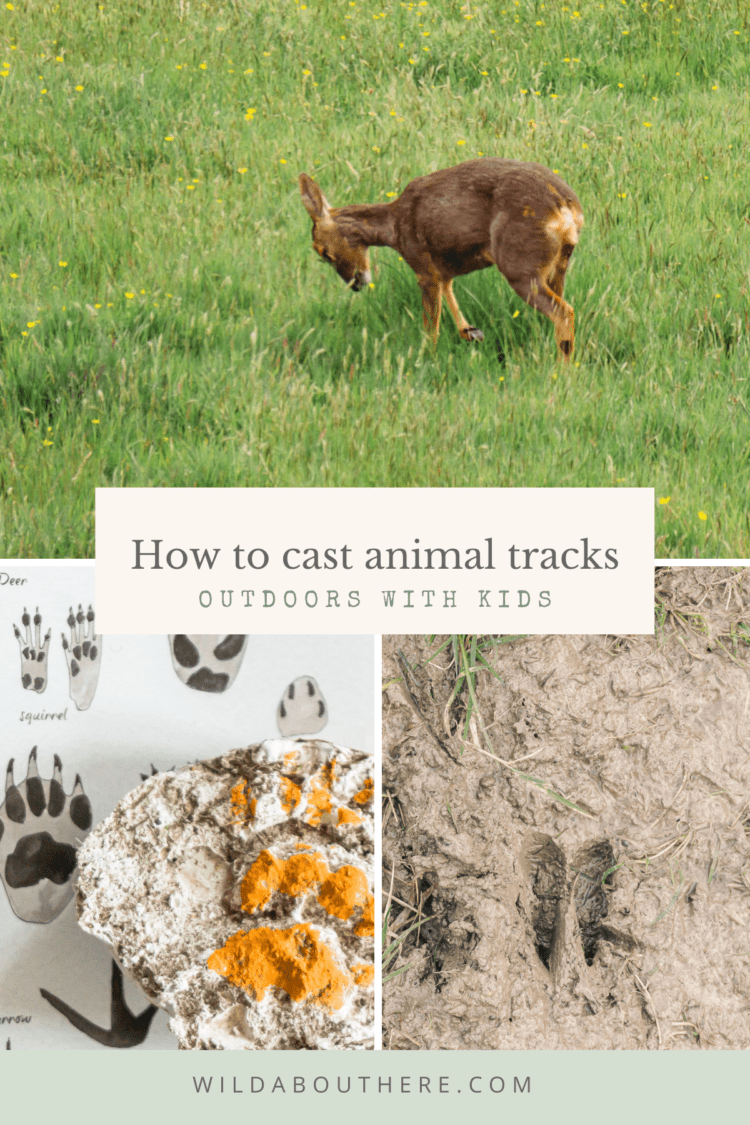 For me the best bit was seeing the amazed expressions on Luce and Theo’s faces when we lifted the casts and they first saw the moulded footprints.  We’re already planning more casting sessions.  Luce wants to find a really clear badger track to cast. Theo wants to see what other animal we can find in the woods.  And I want a warm and sunny Spring day – of course, after a rainfall to ensure we’ll find plenty of tracks in the mud. Sounds like a perfect excuse to bring along a picnic next time to enjoy while we wait for the plaster moulds to set.