My kids – not surprisingly – are fascinated by space so I was ‘over the moon’ when I found the perfect space book for kids: Professor Astro Cat’s Frontiers of Space by Dr. Dominic Walliman and Ben Newman. I’ll also admit that this space book captivated me. Whenever I read it to them I learn something new.

The character Professor Astro Cat narrates and appears throughout the book explaining everything from the Big Bang theory to the workings of the solar system to the future of space. How does a rocket work? What are constellations? What is a hypernova? What would happen if you were sucked into a black hole? Which moon do scientists think could possibly contain life? Did you know only Venus spins in the opposite direction to all the other planets? Why did Neil and Buzz leave a mirror on the moon? What is the future of space travel?

Professor Astro Cat guides us through the solar system and the night sky, while answering all those questions about the mysteries of space. And it’s a space book my children can keep on their shelves and not outgrow.

It’s also beautifully illustrated. Unlike many kids’ space books which are a mish-mash of space photos, Professor Astro Cat’s Frontiers of Space is a picture book filled with informative drawings in a playful but elegant retro style.

Professor Astro Cat’s Frontiers of Space was published in October 2013 by Flying Eye Books, the children’s books imprint of London publishers Nobrow Press. The book is a result of the collaboration between Dr. Dominic Walliman and illustrator Ben Newman, a quantum physicist and an illustrator. They met in their teens but Newman went to art school while Dr. Walliman received a PhD in quantum device physics from Birmingham University. Ben Newman has illustrated two other books with Nobrow Press while Dr. Walliman currently works as a quantum computer mechanic in Vancouver.

***Inspired by this book we also used fruit and other measurements in a very popular post of mine to compare planet sizes which you can read here!***

Together they have created what I consider is the best non-fiction space book for kids. 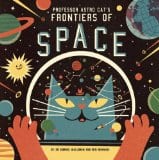 I personally feel it’s important that my kids learn about outer space. Tourist flights to the other frontier may soon be commonplace. Virgin Galactic wants it to happen. Will my kids be space tourists in the future?

If you have kids interested in space, then here are some more suggestions:

The King of Space – science fiction book for kids

The London Times listed Professor Astro Cat’s Frontiers of Space in their guide of the best children’s books published in 2013. So far this outstanding space book for kids has never been put into a bookcase as my kids keep looking through it, asking us to read from it and my son regularly falls asleep with it open by his pillow.

Previous Post: « The Pony ride that didn’t happen but ended in a bump
Next Post: Otter Pond – or a tale of Swan Lake? »