You are here: Home / Wild Kids / A stream adventure with kids 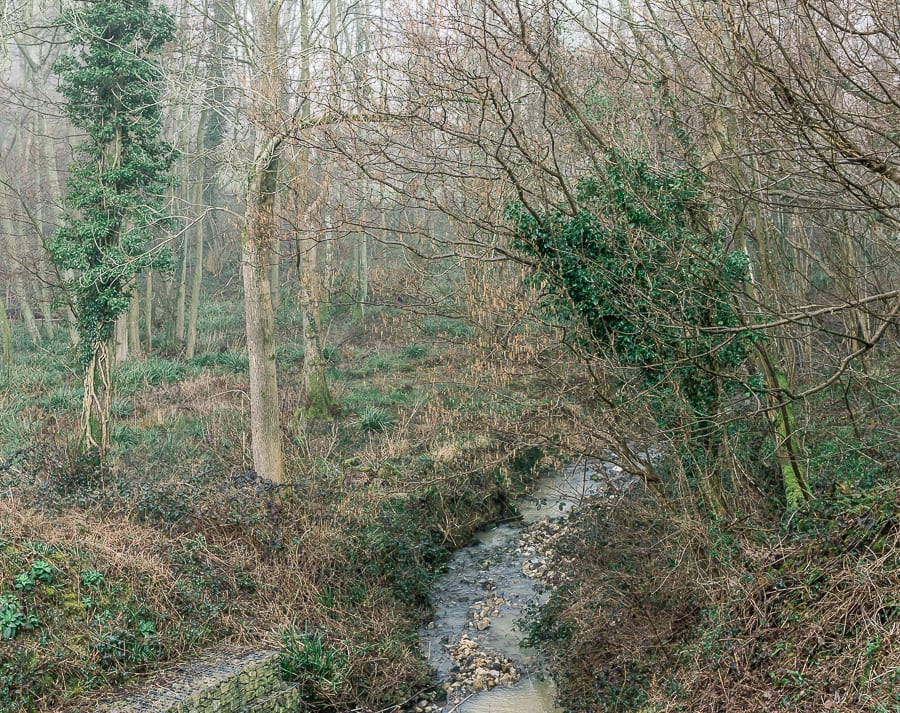 What is it about streams and kids? Without fail when we’re out on a walk if there’s a stream nearby then my twins Luce and Theo immediately are drawn to it. But it’s not just them. It’s the same when their friends have joined us. They all want to go on a stream adventure.  Perhaps it’s because children are natural explorers and love playing in water. A stream or a brook is often an ideal natural play area for kids.

Water is one of the most valuable play environments, and running water adds an extra dimension and challenge as anyone who has played in a stream or on the beach will know.” Nature play ideas by the Forestry Commission. 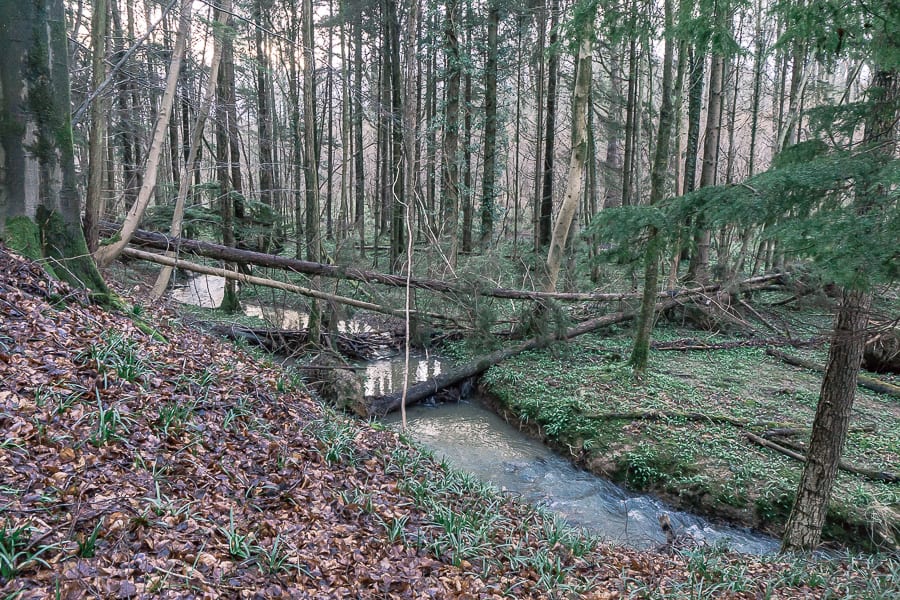 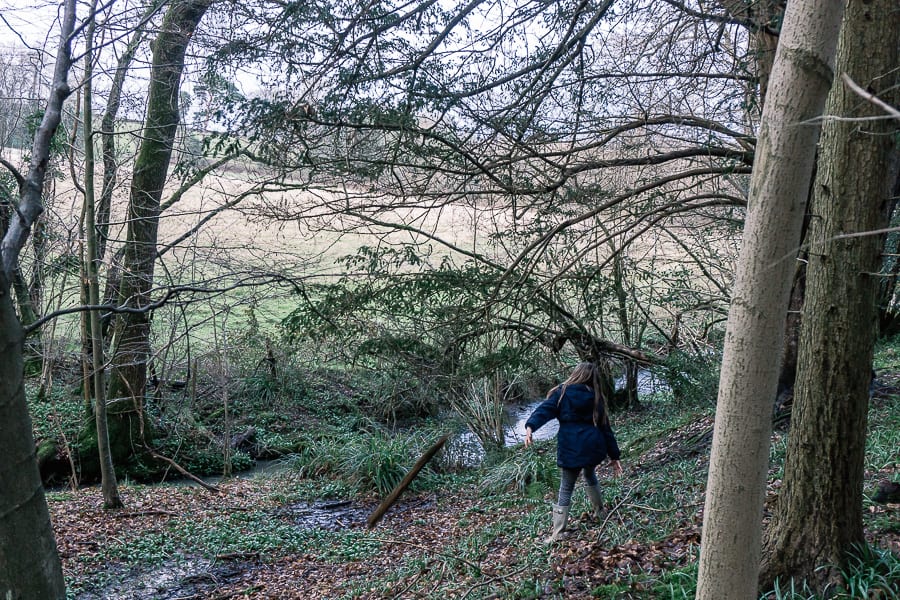 In fact Luce and Theo insist we regularly go on walks where they just follow a stream – such as this past weekend and last week and too many other times to name. They love straying off the main paths and finding their route through a wood with just the stream acting as their guide.

You can find out which UK National Trust natural play areas have streams to splash in here.

Actually I also have to take on the ‘parent guide’ role. As they climb over brambles, clamber down hills to be close to the stream, you can hear my shouts echo through the woods – “that hill is too steep ” …“careful of the slippery mud”… “the water is too deep there” etc. , etc..  But whether it’s playing in streams or climbing a tree I know that it’s good for kids to assess and take risks. 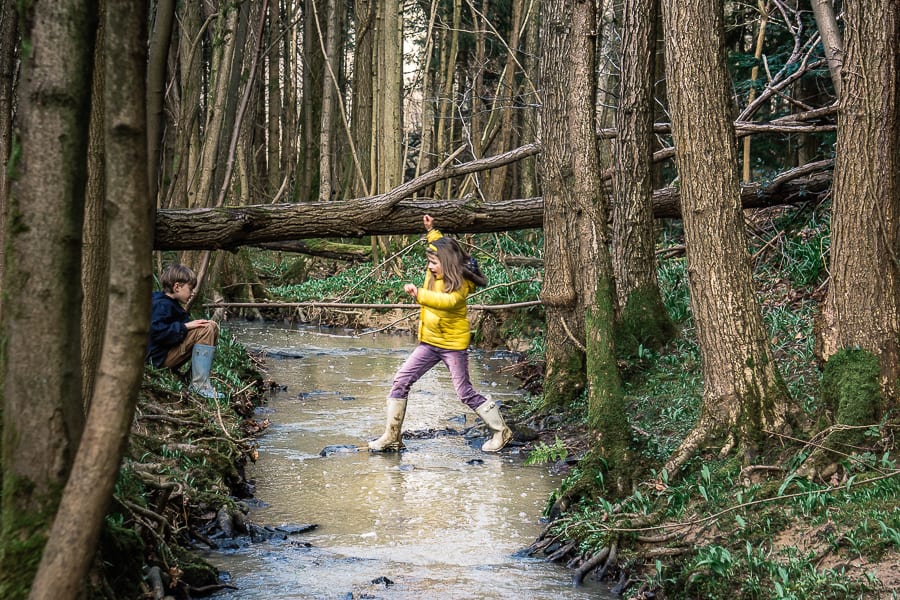 The best stream adventures include:

It doesn’t matter either if it’s winter, spring, summer or autumn.  Of course when it’s warm Luce and Theo tend to splash about in the water more! Last summer they also were convinced that they had found a beaver lodge in local Sussex woods. They ignored me when I told them there were no beavers in the English wild anymore – except for a couple places in UK where they have been reintroduced. (In Britain beavers were hunted to extinction by the 16th century). Luce and Theo wanted to imagine that beavers were sharing this stream with them. 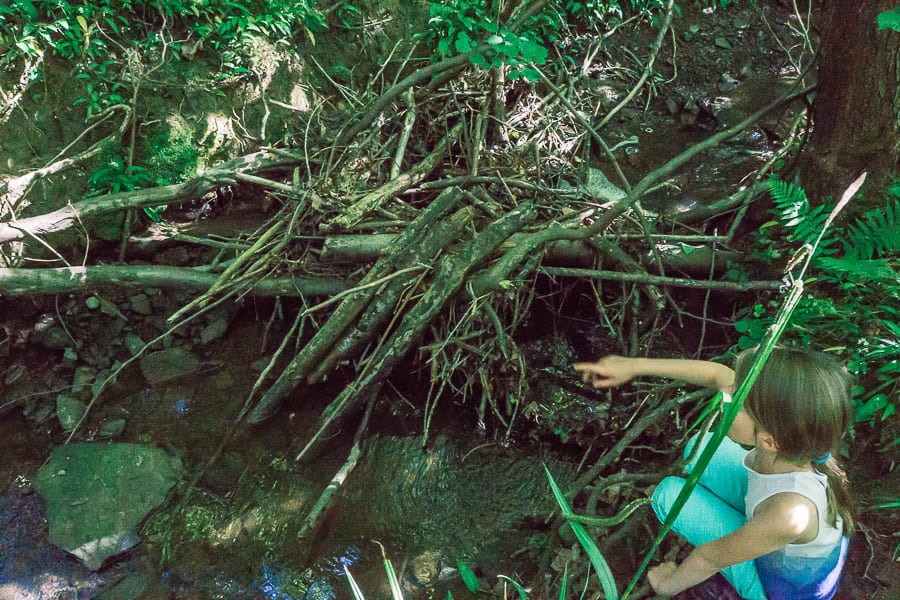 Sometimes my instinct as a parent is to get anxious that they’re going to hurt themselves or try to cross a stream where it’s too deep or too slippery. But Luce and Theo know they must not wander off where I can’t see them and must be careful around water. I sigh with relief when they play in an area of the stream that is very shallow, gentle and calm. 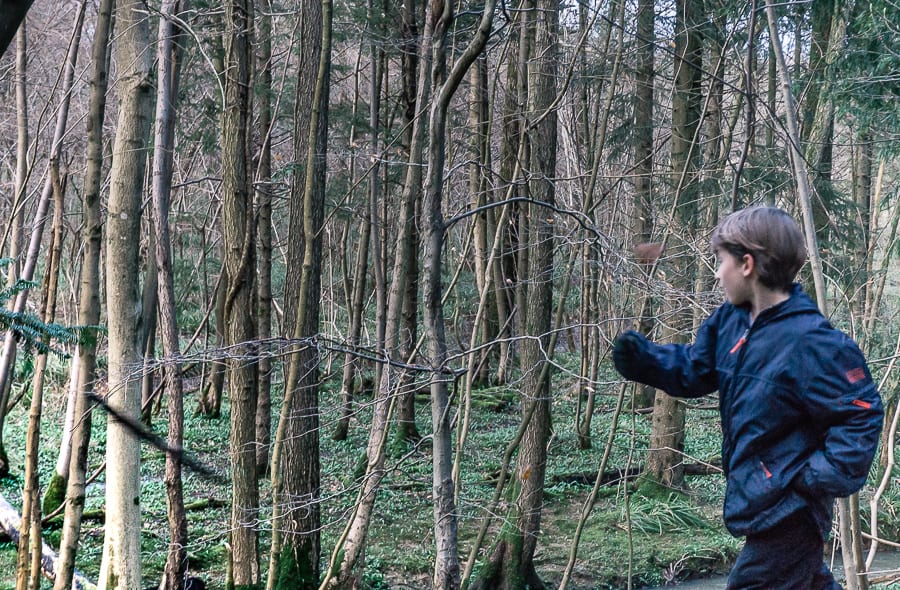 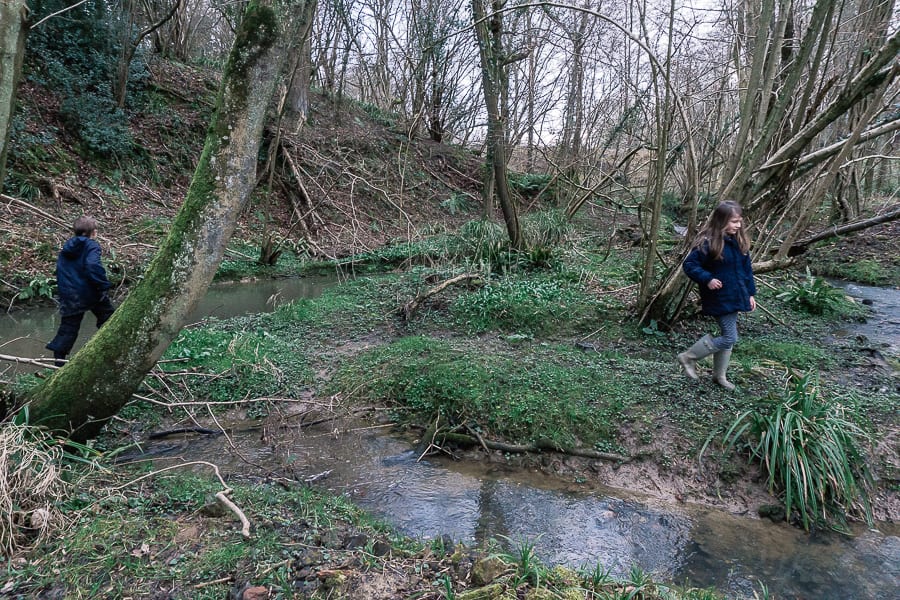 After a recent stream adventure, I finally had a chance to relax at home. Lo and behold there was a Sunday Times article with the title “Children need danger, says safety chief.”  It was a report on how the outgoing head of the UK Health and Safety Executive Dame Judith Hackitt felt children needed to experience danger.

She said children should be encouraged to climb trees, play games where there might a be a risk of injury and go on field trips and other adventures…’Overprotective parents and risk-averse teachers who do not enable children to learn how to handle risk will lead to young adults who are poorly equipped to deal with the realities of the world around them, unable to discover real risk from trivia, not knowing who they can trust or believe.’” Sunday Times

Building a dam on a stream is also one of the “50 things to do before you’re 11 ¾” listed by the National Trust. I don’t have photos of their latest dam effort because I put my camera back into the bag when they were building it as I was trying not to slip in the mud! Luckily mud is good for us all.

Kids just love natural play areas – such as this favourite one of Luce and Theo at Sheffield Park – with or without a stream.

Luce and Theo are only 8 years old but I know as they get older they’re going to be even more adventurous by streams. Despite my worries I know they’ll be having a great time outdoors in nature and will be taking risks that help them later as adults. I have very fond memories of heading off to swim in a natural pool in a stream on hot June days when I was a young teen at school in the Dorset countryside.

Some kids don’t want to be organized all the time. They want to let their imaginations run; they want to see where a stream of water takes them. 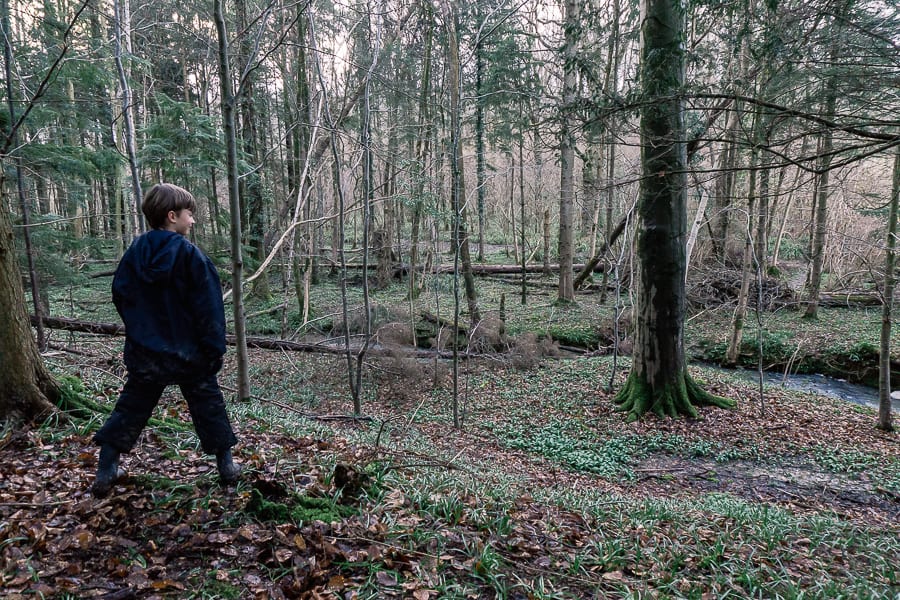 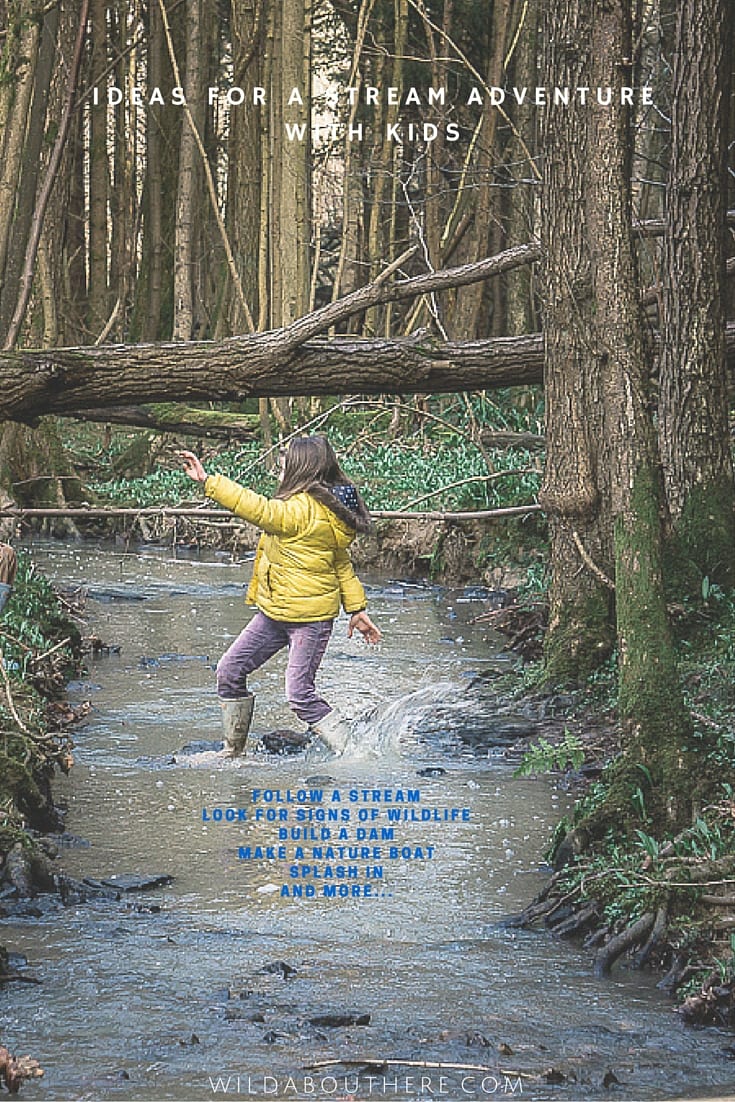 Is there a stream your kids love to play in too? Any other stream adventure ideas you can add?