Privacy Policy
You are here: Home / Wild Kids / The Hamptons Birds of Prey – Look up at the sky! 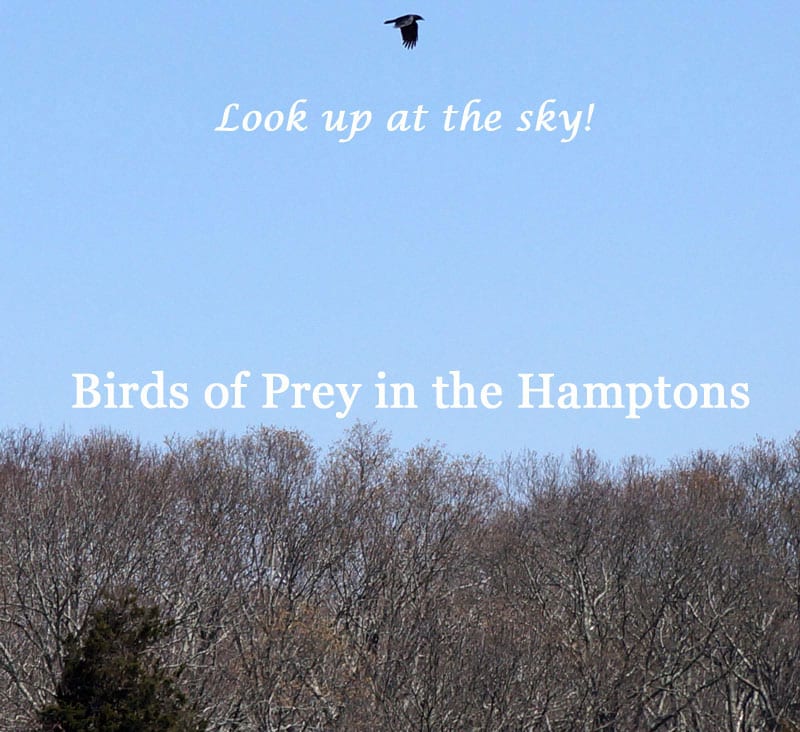 Look up at the sky! I told my kids. Another hawk overhead. Living in the Hamptons we often stared up at the sky or searched telephone posts and wires looking for birds of prey. 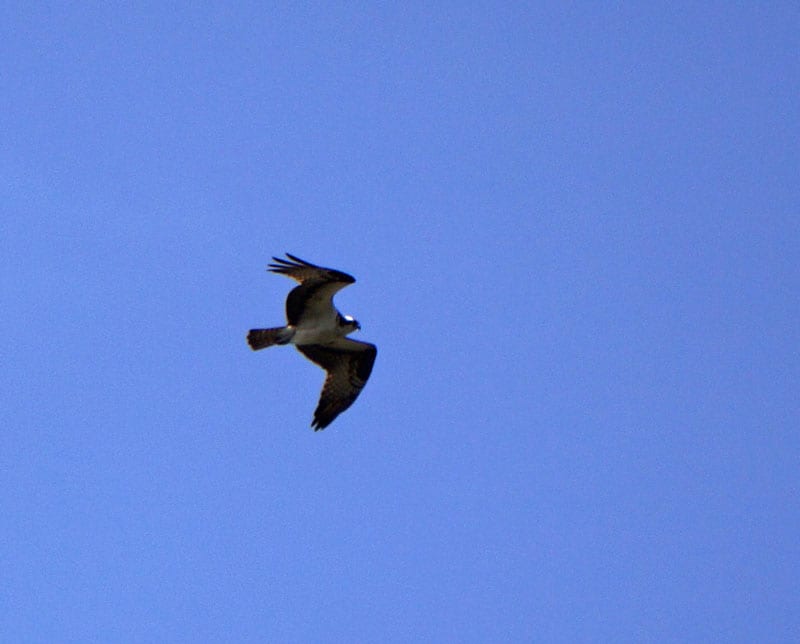 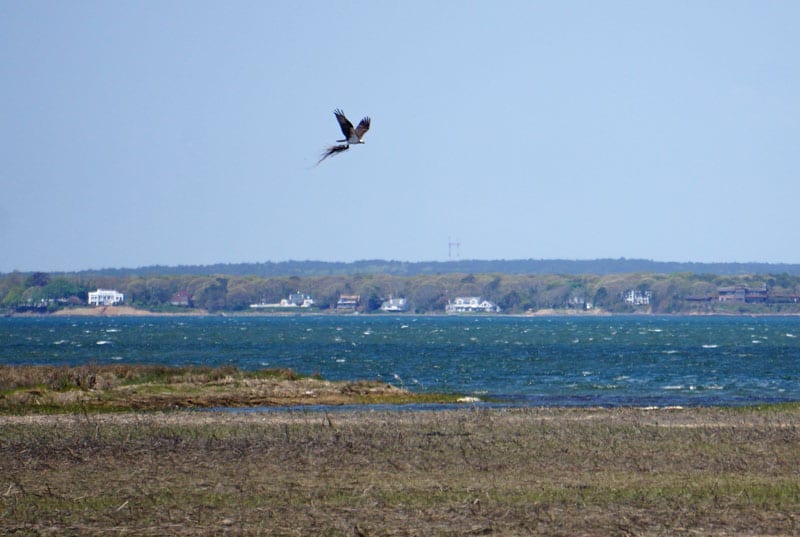 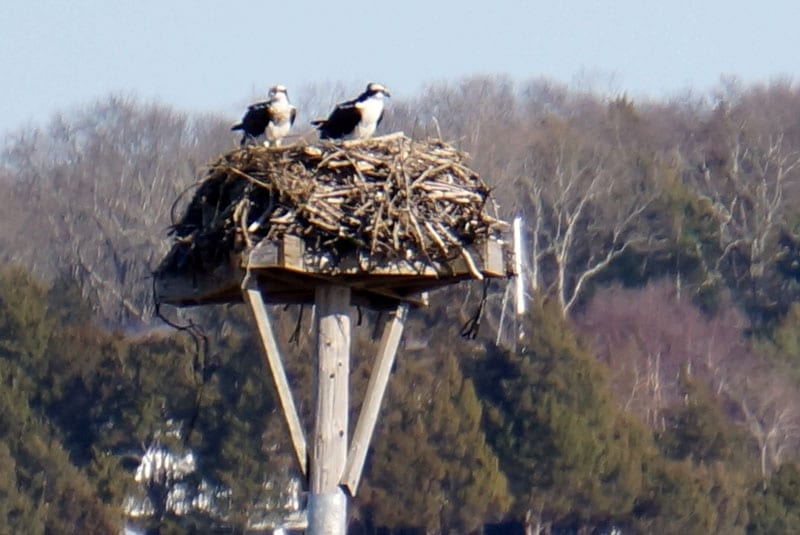 From the Spring onwards my children and I caught sight of Ospreys sitting on their high nest poles scanning the water nearby. I’ve even seen one swoop down and catch a fish and then return to its nest holding it aerodynamically between its talons in flight. We’ve watched red-tailed hawks soar and circle above fields. We’ve observed birds of prey in local wildlife rescue centers and refuges that have been injured and no longer would survive by themselves in the wild.

My kids and I together started learning about birds of prey – also known as raptors – thanks to living in an area where these magnificent birds still hunt and live. Or pass through during migratory periods. 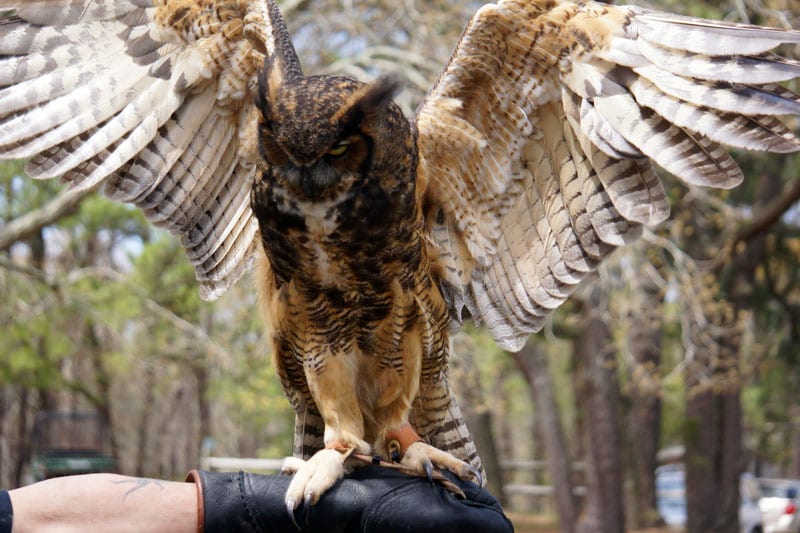 Together we’ve discovered that raptors are known for their excellent eyesight, curved beaks and powerful talons. You might think of the Great Horned Owl as wise and calm but it’s considered the top and strongest hunter out of all the birds of prey.  Crows are terrified of the Great Horned Owl so if you hear a murder of crows all screeching and flying in a frenzy one early morning – then it’s probably because they’ve spotted their worst enemy. 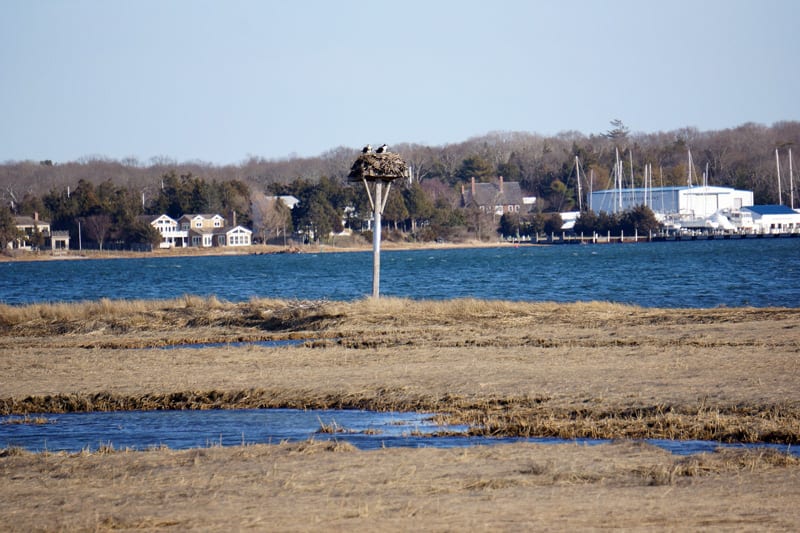 It’s only because my kids and I have been exploring the natural world in Long Island that we’ve marveled at the wildlife in the sky, trees and water around us. When we’re driving in the Hamptons, my kids, unlike me, are not interested in gazing at the mansions that we pass. When we pass open fields I tell them to look out for hawks. When we visit a nature reserve in wetlands or by a water inlet or pond I get them to spot the Osprey nest poles.

We want to go back to the amazing Walking Dunes – one of my kids’ favourite places – because apparently it’s a great vantage point for scanning the skyline for raptors hunting. Especially in September and October during the Fall migration. The natural world of the Hamptons is filled with birds of prey for kids to discover outside.

Kid-friendly guide to birds of prey in the Hamptons

I’ve made a guide on some of the birds of prey in the Hamptons with some basic facts for kids. 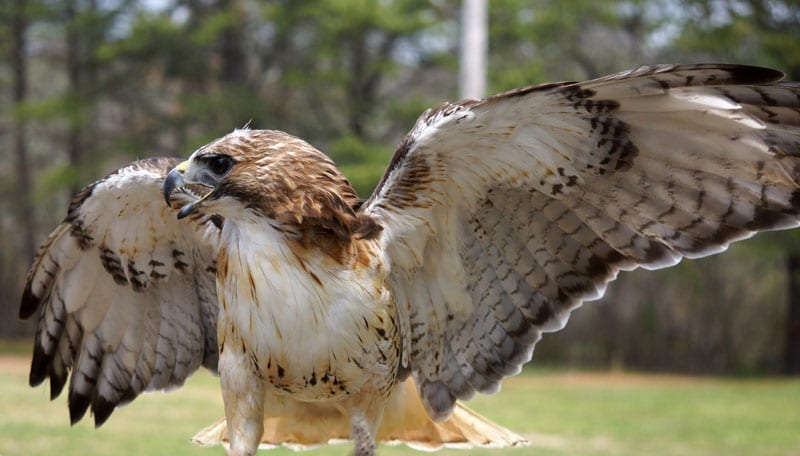 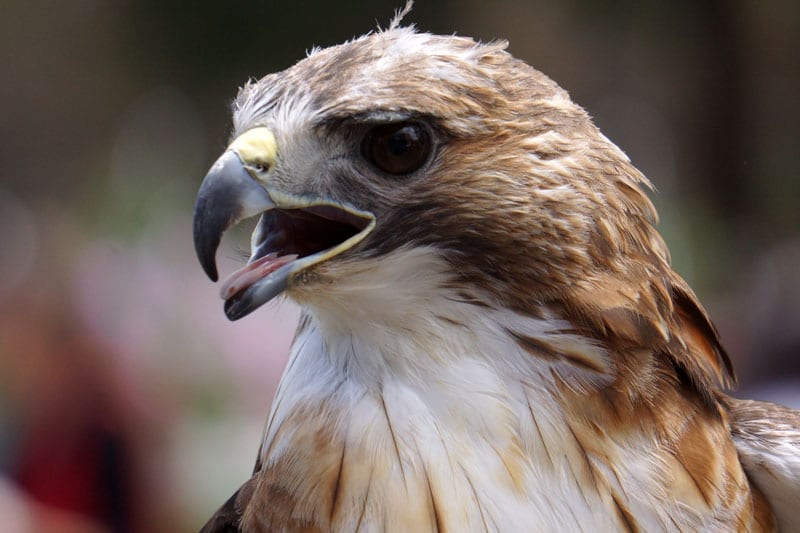 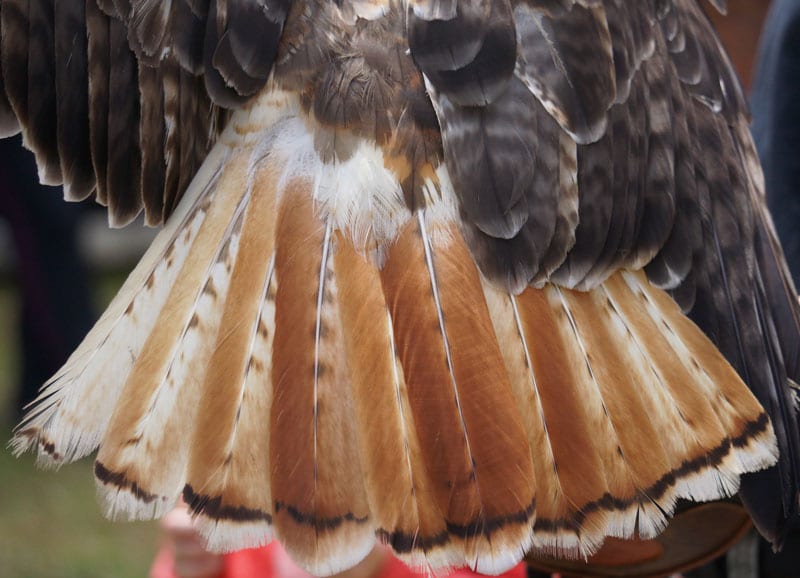 We’ve regularly spotted them circling in the sky above the fields at SOFO (South Fork Natural History Museum and Nature Center). 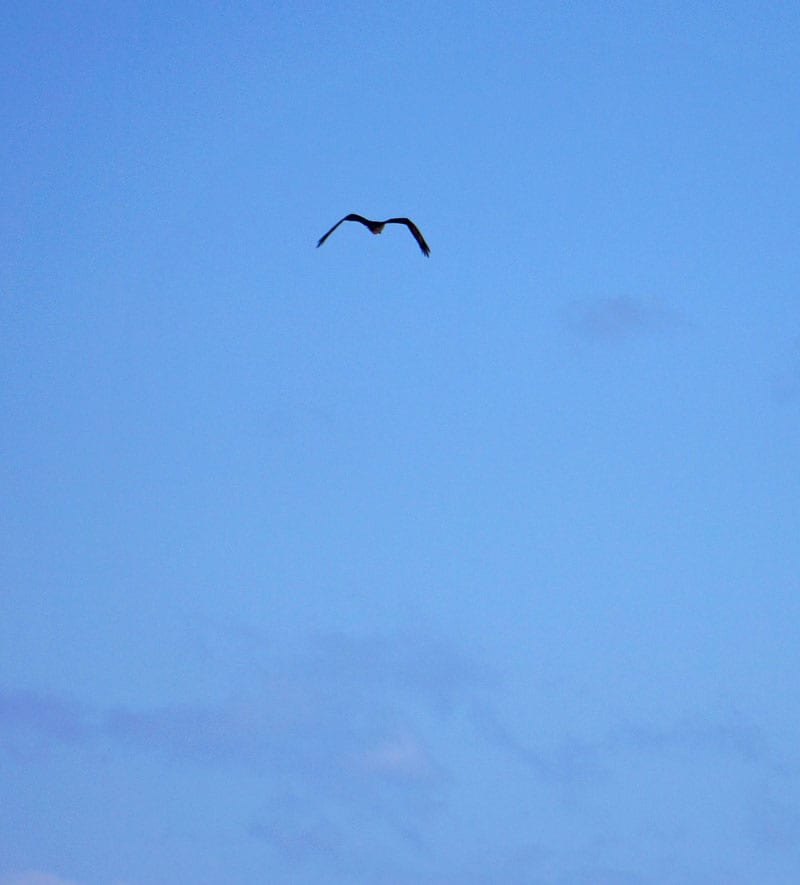 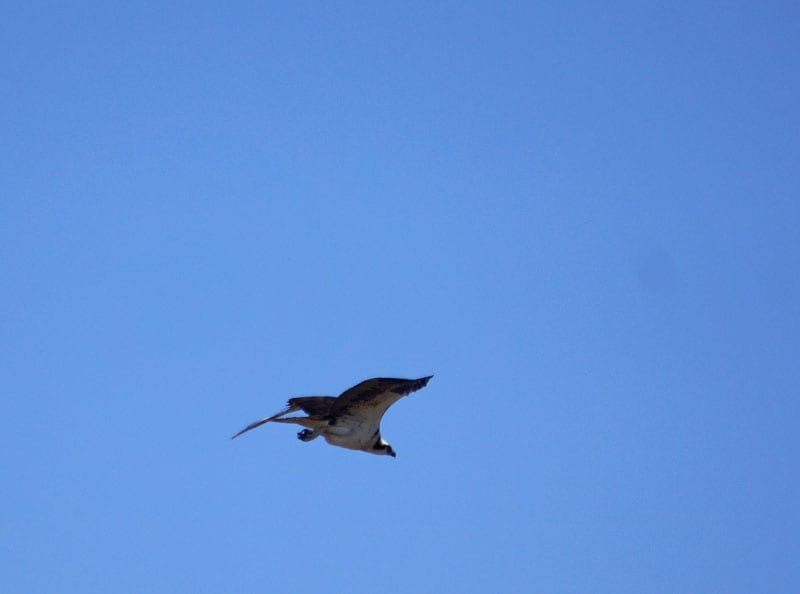 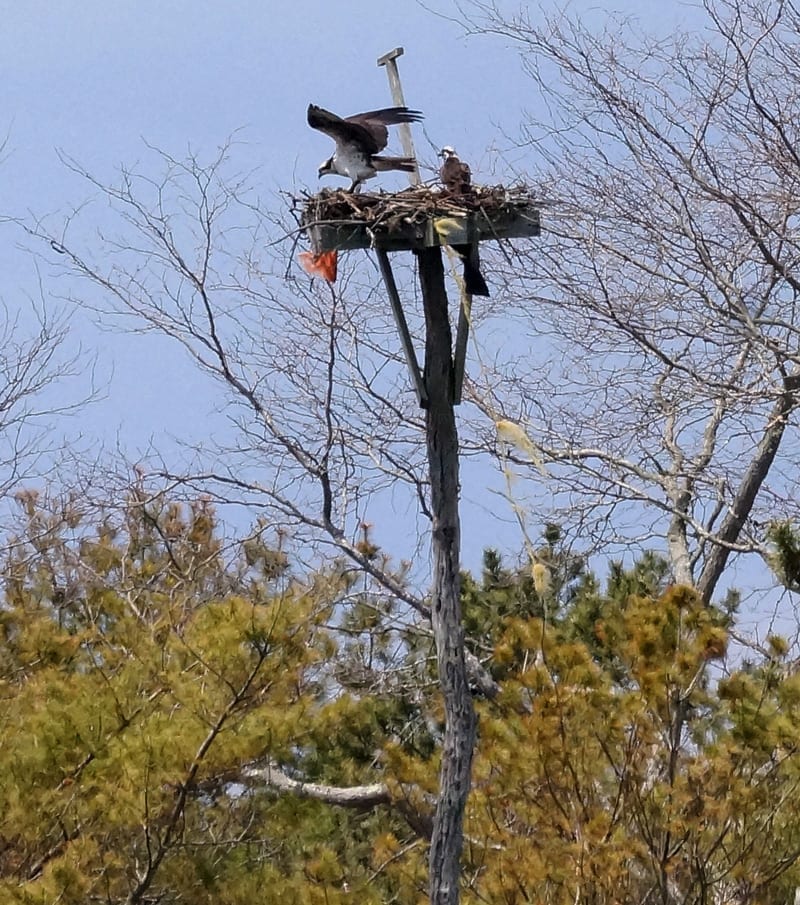 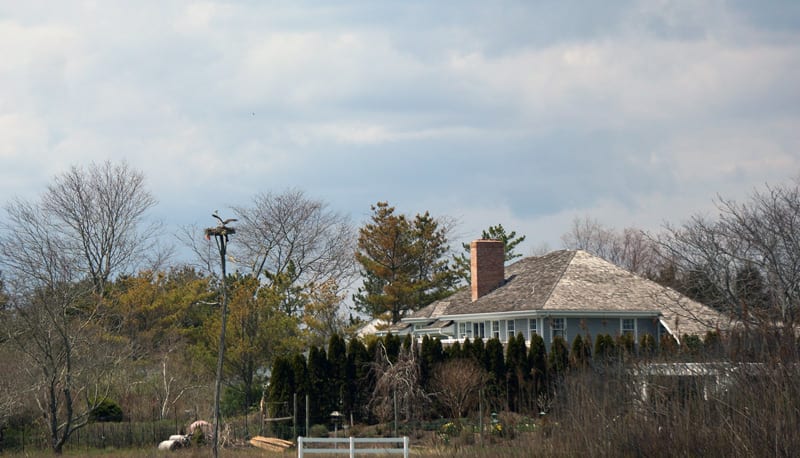 We’ve spotted Osprey nest platforms on Sammy’s Reserve, Elizabeth A. Morton National Wildlife Refuge, SOFO, Munn Point and in a water inlet by Cobb Road in Watermill. The last location (above) is an example of how Ospreys have adapted to developed areas.

There are Osprey nest poles on many other nature reserves in the Hamptons. Osprey numbers are increasing again after DDT was banned. 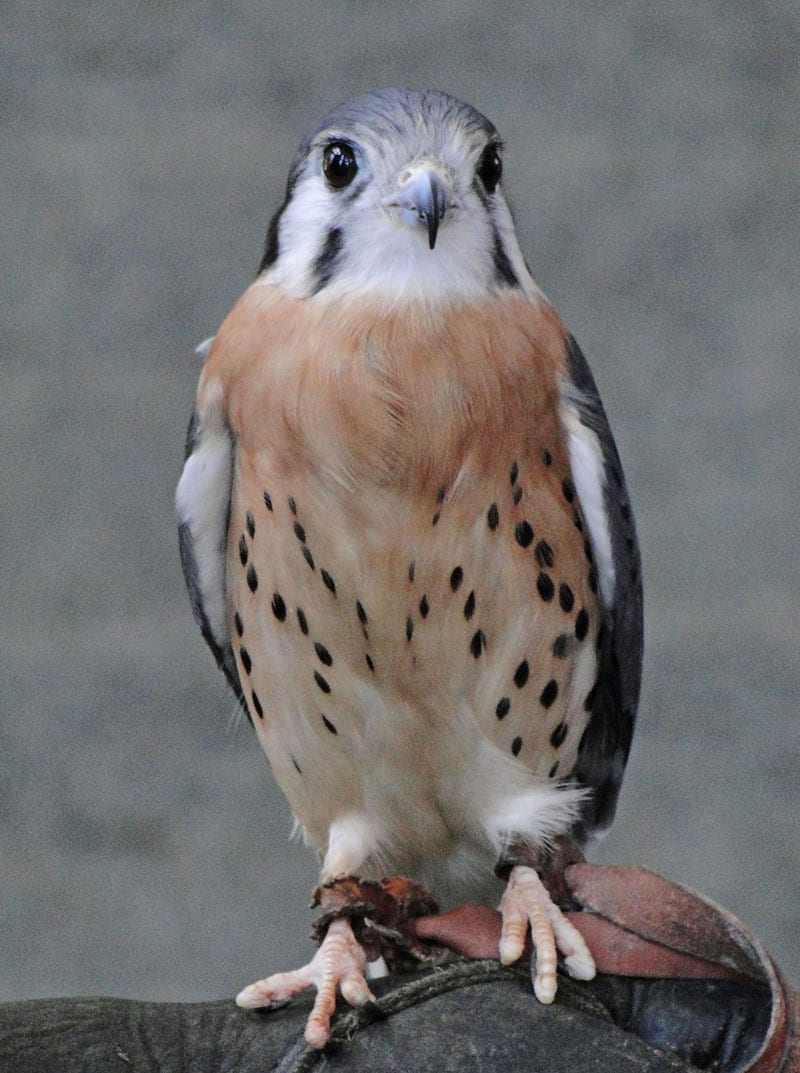 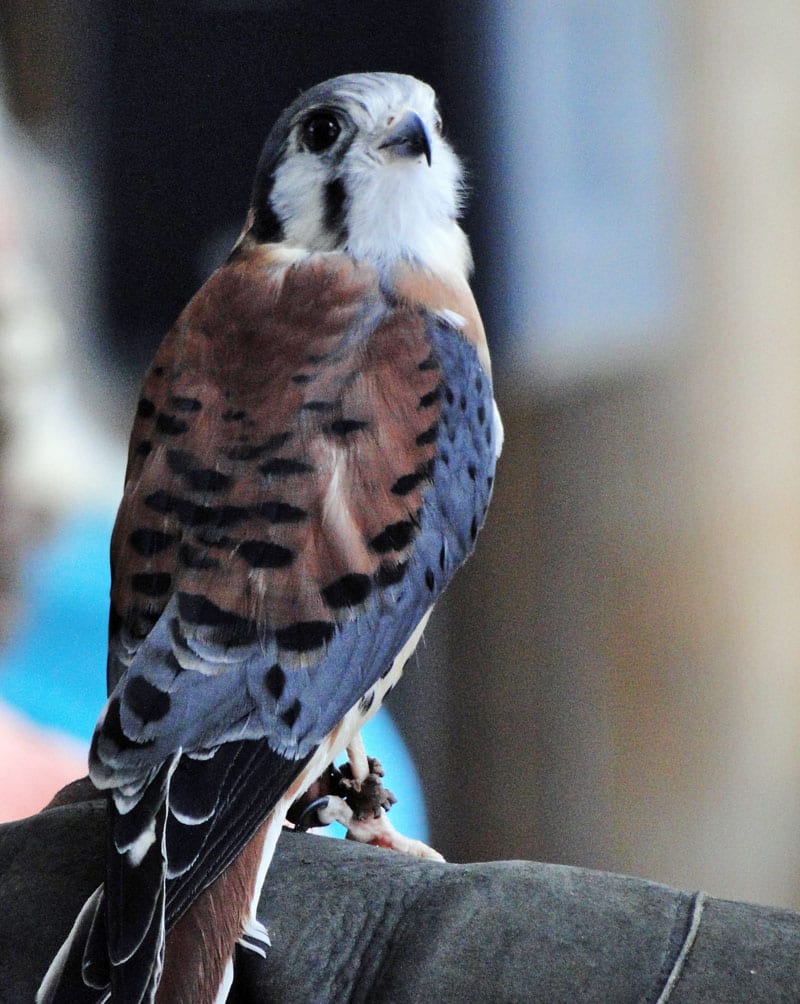 My picture was taken of an injured Kestrel taken care of in New York’s Adirondacks Wild Center.   The Audubon Society has been installing nesting boxes throughout the state including Long Island after numbers started dramatically dwindling. 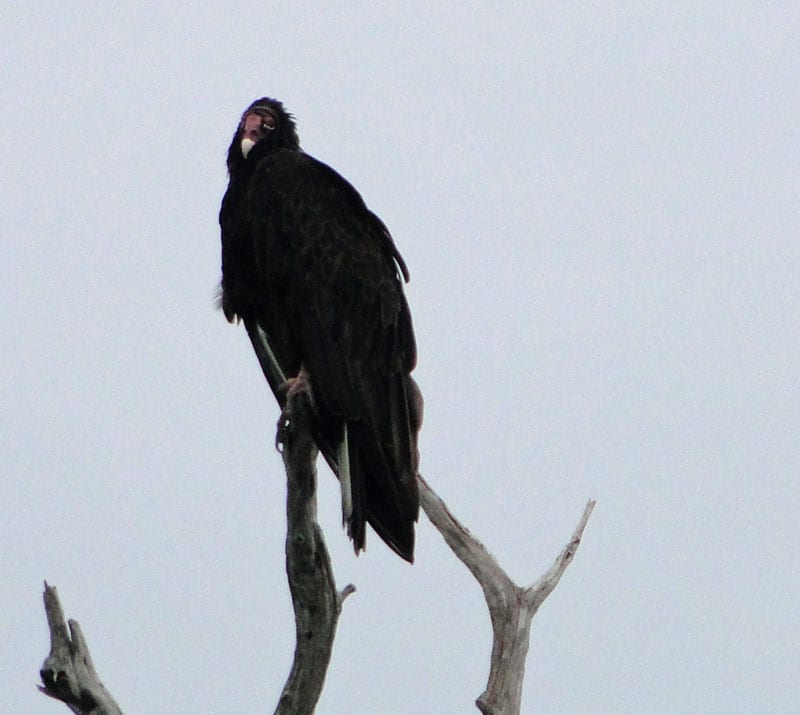 There are occasional sightings of Turkey Vultures in the Spring and Winter. (My picture was taken on a visit we made to the Everglades in Florida where it was perched high on a dead branch above the treeline.) 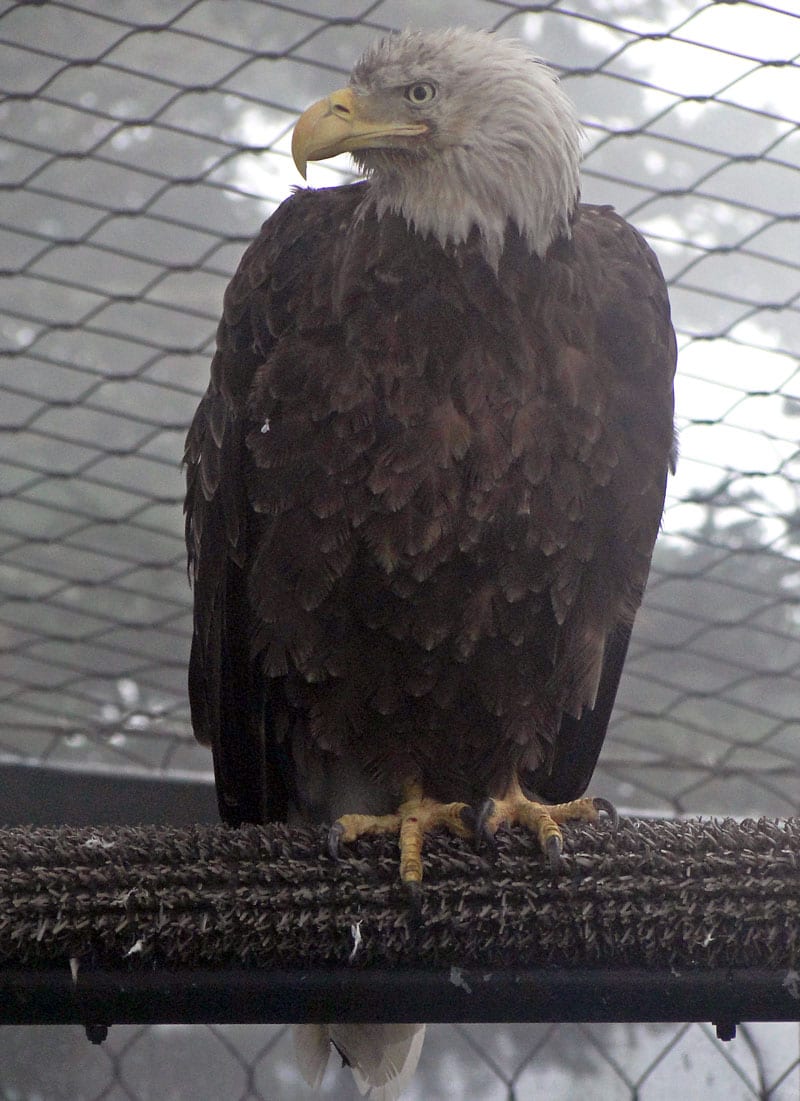 Soon you might glimpse an eagle if you’re lucky as they have started nesting again in Long Island. Adult Bald Eagles have three nesting sites near the Hamptons on Long Island:

Once Bald Eagles select a nesting location they tend to use it for the rest of their lives. 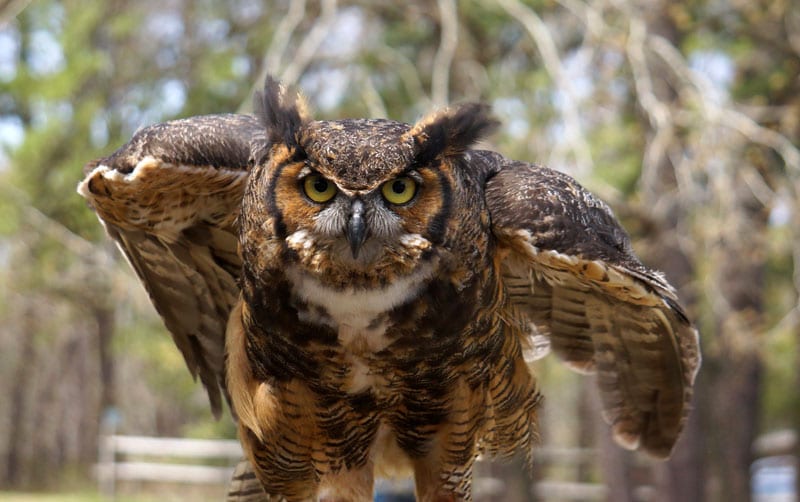 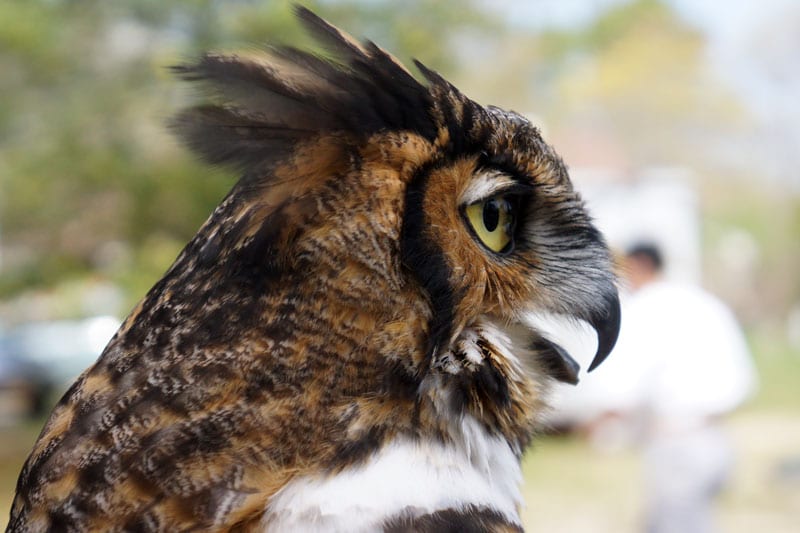 SOFO organizes Full Moon excursions for actual sightings of an Eastern Screeched Owl or even a Great Horned Owl. We haven’t been on one of these outings as only children 12 and over can accompany adults.

My images are of a Great Horned Owl rescued when it was two days old. She had broken both of her wings as well as pelvis. As she can’t fly properly she can’t be released into the wild. Meep is now a wildlife ambassador in educational programs by the Wildlife Rescue Center of the Hamptons. 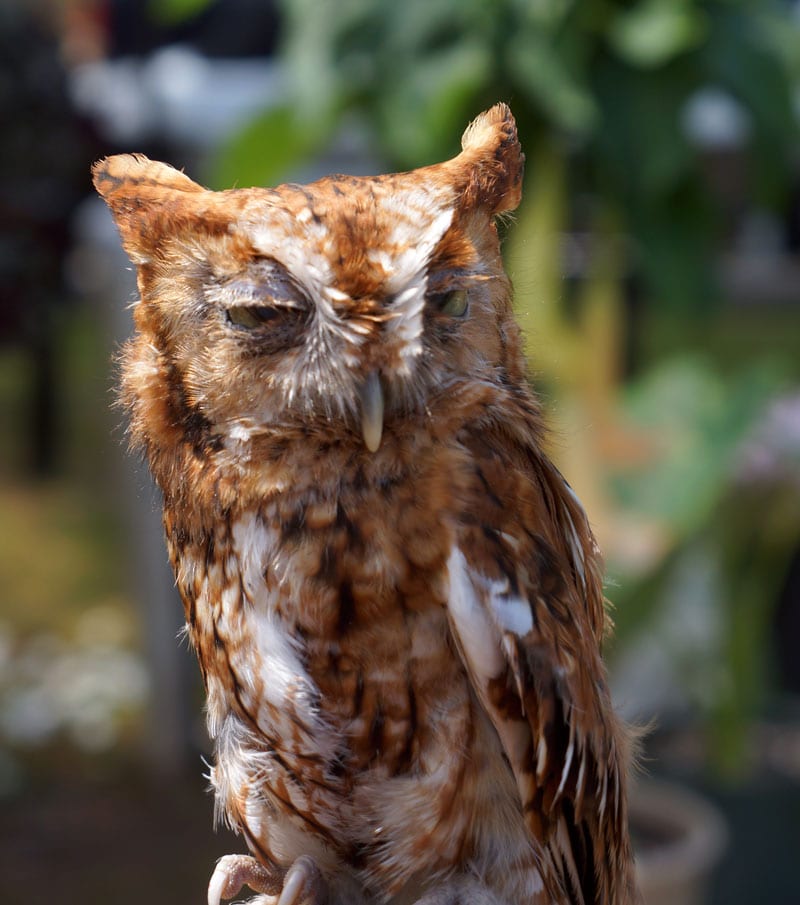 Their trilling call can be heard at night in woods. SOFO organizes walks in woods on Full Moon nights to see and hear them.

My images are of an injured adult Eastern Screech Owl called Martino which now resides at the Wildlife Rescue Center in the Hamptons. He weighs only weighs 6 ounces (160 grams)!

OTHER BIRDS OF PREY 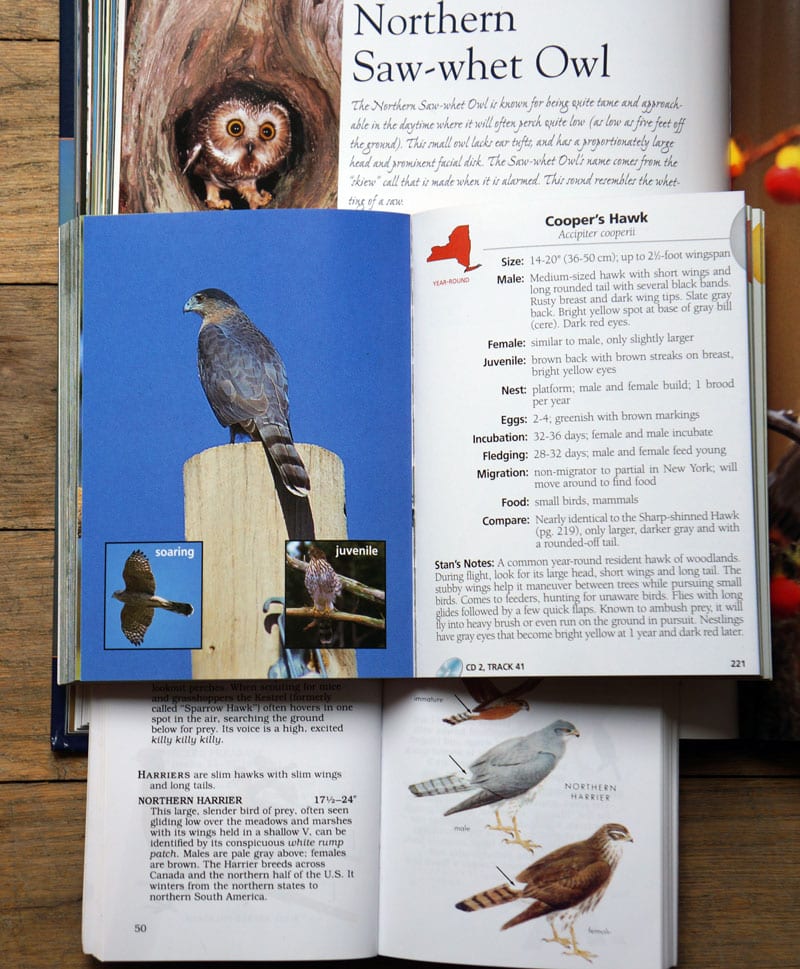 Other birds of prey that appear in the South Fork of Long Island are:

Owls: Snowy Owl (apparently a sudden increase in their numbers this past winter), Long-Eared Owl, Short-eared Owl and the Northern Saw-whet Owl.

Some hawks can be viewed during the Fall migration season (September and October) when they cross Long Island and follow the coastline on their way south. They hunt during the day including targeting migrating song birds.

I’m no expert in birds of prey. As I’ve explained above, my kids and I first became fascinated about raptors in the South Fork of Long Island. We’re learning together so rely on experts, books and online resources to help us identify and find out more about these wild things of the sky.

Small field guide books – some available in SOFO’s store or online through Amazon – to take on a hike, stroll or drive:

For much more detailed information on birds of prey, these are some great online resources:

Bird events in the Hamptons

If you’re interested in guided bird walks and talks then check out the event calendar’s for:

If you find an injured bird of prey (or any wild creature in the Hamptons) then contact the Evelyn Alexander Wildlife Rescue Center of the Hamptons which has a hospital designed exclusively for wild animals. They receive over 10,000 calls a year for assistance or information about injured birds of prey and wildlife found in the eastern end of Long Island.